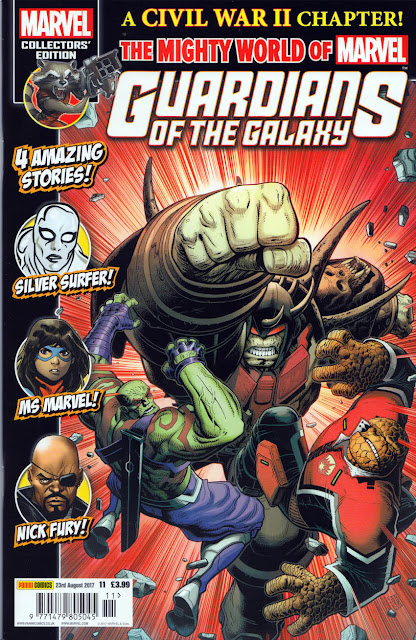 The latest releases of Panini UK's Marvel Collectors' Editions show a marked upgrade in paper quality. Both Mighty World of Marvel No.11 and Essential X-Men No.13 have sturdier covers and a glossier interior paper stock, similar to Panini's graphic novels. Reproduction in the Panini comics has always been good, but now it's very sharp with colours that pop. Far superior to the original American editions in fact!

Whether this will be permanent, or just temporary, I don't know, but it's a welcome improvement. Personally I'm not keen on glossy comics as they reflect the light if you have a window behind you and it can be distracting, but if it means better reproduction then I'm for it. (I also like MWOM's new cover design, boxing in the main art with vignettes of characters along the side.)

Stories in these 76 page comics are:
MWOM 11 reprints Guardians of the Galaxy No.5, Silver Surfer No.8, Ms Marvel No.9, and Civil War 2: Choosing Sides No.2.

Both comics have 76 pages for the great price of £3.99. Available from WH Smith, comic shops, and selected newsagents. 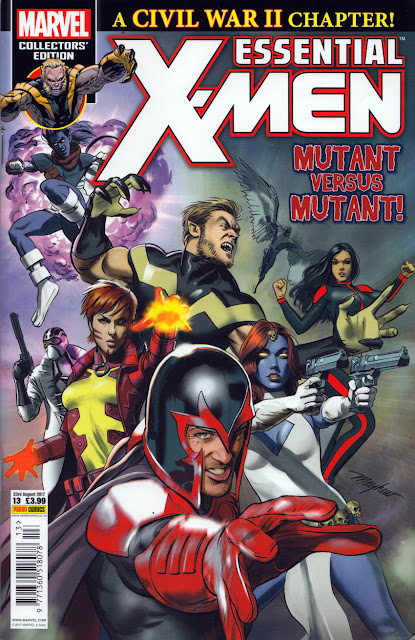 It's confirmed in the letters page of MWOM that it's a permanent move - the CE's will also be moving to the perfect bound format as trialed in Deadpool Unleashed when their next volumes are launched (whenever that is).

Another slightly interesting CE fact from the letters pages is that Wolverine and Deadpool is now the best selling CE hence the new Deadpool title. They don't release figures but for years they said in the letters it was Astonishing Spider-Man. I wonder if Astonishing still shades it over the two issues a month to W&D's one?