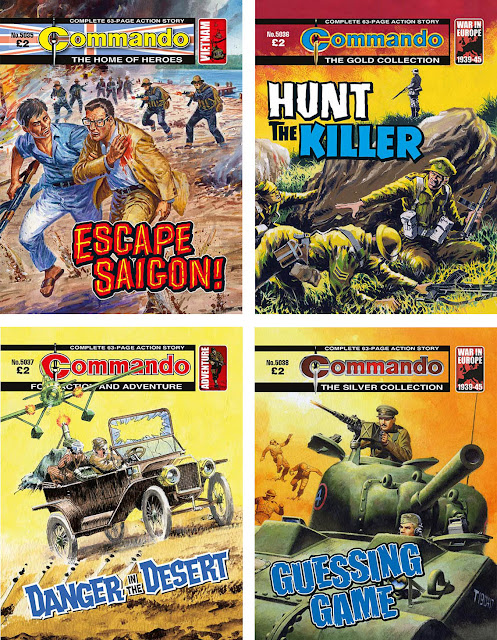 Direct from D.C. Thomson, here's the latest info on the four issues of Commando that will hit the shops on Thursday 13th July...

Richard Davis’s story is one of friendship in the face of adversity. Two men: one American, the other Vietnamese, are best friends, meeting in the hellish setting of the Vietnam war. But neither are soldiers. Van Thieu runs an American style restaurant in the suburbs and Bill Evans is an office worker at the U.S. embassy. But in the final bloody hours of the war, with choppers ferrying the last of the American employees out of Saigon, Bill won’t leave his friend behind…

With interior and cover art by prolific Commando artist Manuel Benet, you know you’re in for a treat. The cover is expressionistic, with thick brush strokes and bold colours, as the two friends take centre stage amidst the carnage around them. The interiors, are similarly stylised, though in a different way to the cover. With little shading and thin line strokes, the images are crisp, with more detail given to facial expressions, adding to the tone of the issue.

This 1960s reprint is all about the villain. Attentively brought to life in Gordon C. Livingstone’s artwork, Brigadefuhrer Helmut Groot oozes evil in the best way. Eyepatch: check. Scar and stitches across left cheek: check. Receding hairline: check. A perfectly despicable design for such a dastardly brute. But Groot is a treat saved for the interior pages, as the cover focuses on our own Tommie heroes, working together and dodging Nazi lookouts.

But, in E. Hebden’s tantalising story Groot doesn’t just look bad, no, the feared and hated Nazi commander is cunning and cruel in equal measure, never blinking as he orders entire squadrons of men lined up and shot before him. Determined to catch the scoundrel, every man in Captain Steve Simpson’s crew kept a picture of Groot, and that was as good as a bullseye on his head. And soon enough, with Hurribombers unable to eliminate the blackguard, it was time for Steve and his men to…Hunt the Killer!

5037: Action and Adventure:
Danger in the Desert

A Commando adventure that doesn’t take itself too seriously, Stephen Walsh’s ‘Danger in the Desert’ is a tale of espionage, with plenty of action and humour thrown in for good measure. Meet Ulysses ‘Danger’ Doyle, petroleum scientist, poet, cross-country runner and a darn good banjo player. He’s on a mission in the Middle Eastern Kingdom of Majaffa to find out why the Nazis are installing pipelines in the desert when there’s no oil… Did we mention he’s also an amateur detective?

Perfectly suited to this Tintin-esque adventure, Keith Page provides the interior artwork and the cover, keeping the whole package uniformly appealing. And, what’s more, when Walsh specified in his script that he wanted secret agent Ned Finch drawn more akin to Roy Kinnear than James Bond, that’s exactly what we got, as Page deftly obliged, poking more fun at the spy genre this issue so lovingly pays homage to.

One look at the cover of ‘Guessing Game’ and Ian Kennedy’s artwork is instantly recognisable. The pastel greens of the tank would make it seem almost innocuous if it were not for the machine gun turret firing just off the cover, British troops falling in the haze behind them. The interior art, however, is relatively unusual for Commando, as Vila uses sounds effects in the panels. Though sparing in use, these onomatopoeias are an interactive and exciting addition as the ‘RATATATAT!!’ of a machine gun is sprawled over and under characters depending on where they stand.

Heptonstall’s story is up to the challenge of excitement, as there are suspicious happenings afoot in the mountains of Northern Italy, with Nazis encroaching the Allied camps around Monte Cassino. Commando driver Corporal Bill Smith’s car is ambushed, his C.O. killed. He only survives by playing dead, the information he overhears vital. From what he learned, Bill thinks he knows exactly how the Axis will strike…but to find out he’ll have to risk everything and everyone. Could his guess be right?

Apparently, Groot is a Dutch surname - or "more widespread" de Groot. I wonder if this comes up in the story.

Of course the giant tree man character Groot in Marvel Comic isn't Dutch. He has a surprising connection to Puerto Rico. Specifically surprising to him.

Yes, I think Groot is a fairly common name in Holland. I've heard it before anyway. Interesting that it means 'big'. Would apply to Marvel's Groot, pre-rebirth anyway.