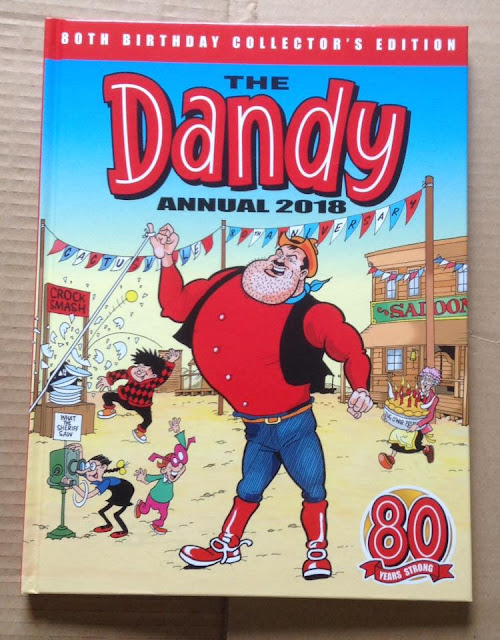 The Dandy Annual 2018 has just been published so I thought I'd give you a quick glimpse at some of its contents.

Kicking off with cover art by Nigel Parkinson, this year's book marks the 80th anniversary of The Dandy, first published in December 1937. Admittedly the weekly comic finished five years ago on its 75th anniversary, but the annual continues, so it seems appropriate for a celebration.

Perhaps to avoid mentioning that the weekly is no longer with us, The Dandy Annual chooses instead to celebrate 80 years of Cactusville, Desperate Dan's home town. In this respect, the book features a 33 page story written by Nigel Auchterlounie, featuring a thread that links through several strips drawn by various artists!

That multi-page epic takes place at the back of the book, and before then there are loads of self-contained strips featuring the Dandy stars. There's been a bit of a change around of artists this year, so we get Winker Watson drawn by Alan Ryan...

...The Smasher by Wayne Thompson... 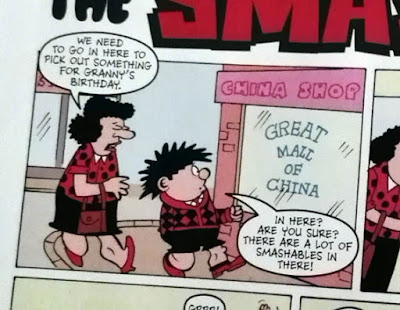 ...plus Korky the Cat by Hunt Emerson, Fiddle O'Diddle by Nick Brennan, and more.

Some strips retain the same artists as previous years, and Cuddles and Dimples wouldn't be the same if Nigel Parkinson wasn't drawing it... 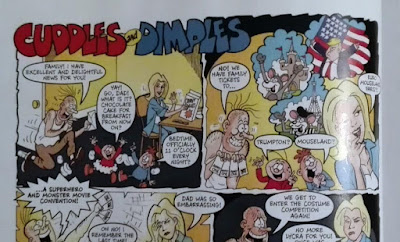 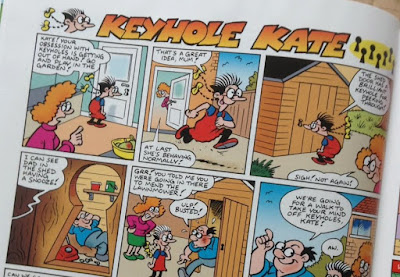 The Dandy Annual 2018 has a healthy page count of 112 pages, although it looks very thin due to lighter, glossier, paper stock. The reproduction of the strips is excellent though, with sharp art and colours.

Although it's sad that the weekly isn't around these days, it's great to know that the annual keeps going, with all-new content every year. (I'm actually writing/drawing pages for the 2019 annual at the moment!) Long may it survive!

Email ThisBlogThis!Share to TwitterShare to FacebookShare to Pinterest
Labels: The Dandy Annual 2018

I have been getting The Dandy Book (later The Dandy Annual) since 1971 and have no plans in giving it up now.

So definitely looking forward to getting this one.

One Scotsman did not think that "Auchterlounie" was a real name, but apparently it is. He remains a wheen doubtful that it is this person's real name, but it seems it must be somebody's. There are those that go by "Smellie".

There are three constants that have stayed with me from early childhood: Doctor Who, The Dandy Book/Annual and 2000AD.

With Doctor Who, there's nothing I can do if it is ever cancelled (which I hope never happens).

With 2000AD, there's always Judge Dredd Megazine (if it's still around).

If The Dandy Annual was ever cancelled, I think I would start getting the older books in reverse order one year at a time.

But I hope none of that ever happens. Besides, I enjoy reading your strips.