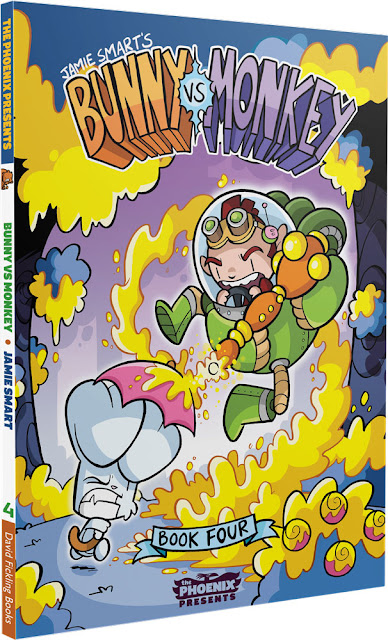 Jamie Smart's unique style has deservedly won him a lot of followers who will be pleased to hear that volume four of his Bunny vs Monkey series is out now! As with the previous volumes, it collects strips from issues of The Phoenix weekly.

Here's the brief description in the PR:


A peaceful night-time picnic in the woods. What could go wrong…?
SPLLLUUURRRPPPP!!
It’s Monkey, and he’s got a robot suit that shoots custard! And wait… there’s more?!
Rocket-powered hot air balloons!
Lord Wuffy-wuff’s dragon!
The wobbles!
and even the terrible HEW-MANS…
Can Bunny defend the woods and avoid getting poinked?!
https://www.thephoenixcomic.co.uk/product/bunny-vs-monkey-book-4/
••••••••••••••••••••••

If comics are to survive in the UK I strongly believe it'll be through books like this and independent comics. Forget any nostalgic hopes of seeing racks of comics in newsagents again. That was the 20th Century way, and today's news trade just isn't interested. The future is in bookshops, mail order, and specialist stores (and digital, although I don't think that's caught on as much as predicted). Whatever direction comics take, give them your support.
Posted by Lew Stringer at 18:05