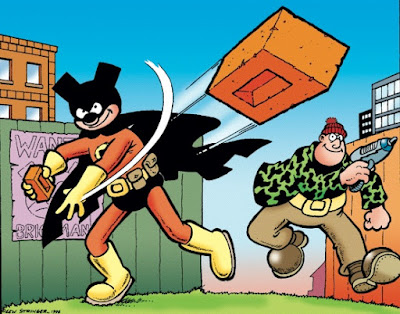 I've posted this info on my other blog but as more of you visit this one I thought I'd post it here too. This is a list of conventions I've been invited to this year. I'm doing a few more than usual this year so if you can make it to any of them please drop by my table for a sketch or just for a chat. (It's always good to meet people who read my strips.) I'll be bringing copies of Brickman Returns! to the events, along with any new comics I publish this year. I'll be adding a couple more dates to this list soon too.

It's hard to believe that several years ago we only had one comics convention a year, if we were lucky! Now there's at least one event, often more, practically every weekend of the year. The current UK comics community has never had it so good and these events are great to forge new friendships, meet up with old friends, interact with the readers, promote new comics, or just soak up the atmosphere of the comics scene. See you there!

Email ThisBlogThis!Share to TwitterShare to FacebookShare to Pinterest
Labels: convention

Thanks for the heads-up on these, I hope to attend some of these this year and speak to you in person- which will seem weird given that I've been reading your stuff since the 80s Marvel UK days.

Slightly off topic, I was wondering if you have ever tried marketing your creator-owned characters into non-comics merchandise, and if so what your experience has been (and if not, could you mention why? If the world isn't ready for Combat Colin toothpaste and Brickman Pez dispensers, then stop the train- I wanna get off!).

Merchandising isn't something I've ventured into but it's a possibility for the future. The priority at the moment regarding my characters is to get them all back into print, then maybe do a few merchandised items later. I'll see how it goes.

It'd be good to meet you at a con. Hope you can make it.