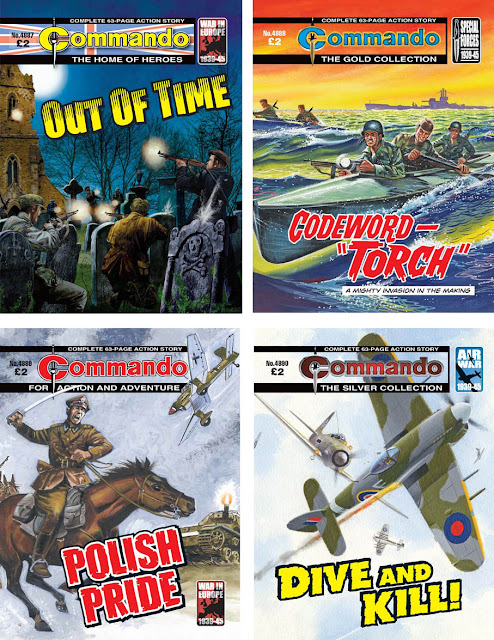 Directly from D.C. Thomson, here's the lowdown on the four issues of Commando that will arrive in shops on Thursday 11th February. As usual, the format is two brand new issues plus two reprints. Another four will follow in a fortnight.

Commando No 4887 – Out Of Time
It seemed that the Grossin brothers couldn’t be more different.
Marc was a mild-mannered watchmaker — the occupying German garrison had used his skills to mend various timepieces dotted around their base.
Meanwhile, his younger brother, Bernard, was a member of the local French Resistance and he had begun to wonder if Marc was getting too friendly with the Nazis.
That was the least of Bernard’s worries, though. During a shoot-out at a ruined churchyard, he wondered if he was finally
OUT OF TIME
Story: George Low
Art: Rezzonico
Cover: Janek Matysiak
Preview: http://www.commandocomics.com/latest-issues/11th-february-2016-collection?issue=4887

Commando No 4888 – Codeword – “Torch”
One man held the key to the operation called by the codeword — “TORCH” — the huge Allied invasion of North Africa. His name was Pete Macrory, a Canadian in the Royal Engineers — and nobody trusted him an inch.
To find out why, and what made Pete tick in his own peculiar way, you had to go way back to General Wolfe’s attack on Quebec in 1759. That’s when a distant ancestor of Pete’s, young Jock Macrory, was involved in a deadly adventure of his own...

Introduction
I don’t think I’ll be spoiling things for you, as there is a big clue in the title, when I reveal that this story features Operation “Torch” — the real life British/American invasion of French North Africa in the winter of 1942.
However, people often mistake Commando for some kind of history book but this is not the case. Although we use authentic military events as a backdrop (and strive not to be wildly inaccurate regarding their use), we will always have fictional principal characters placed among them, ensuring that the stories are works of the imagination, with scope for action and adventure.
Scott Montgomery, Deputy Editor

Commando 4889 – Polish Pride
When their unit was wiped out in the Blitzkrieg that heralded the beginning of World War II, Lieutenant Bartek Abramski and Sergeant Jakub Brejnak reluctantly found themselves on the run from the Germans.
These proud Uhlan cavalrymen were determined to survive and live to continue their fight another day. As time wore on, though, the chances of this seemed increasingly slim. However, when they teamed up with a downed pilot, a fellow Pole, it looked like they might have a chance to escape the clutches of the enemy…
Story: George Low
Art: Carlos Pino
Cover: Carlos Pino
Preview: http://www.commandocomics.com/latest-issues/11th-february-2016-collection?issue=4889

Commando No 4890 – Dive And Kill!
It took nerves of steel to survive in the deadly skies over war-torn Europe…Pilot Officer Chris Bennet had proved that. Or so his fellow pilots thought. They reckoned he was the bravest guy they knew.
But even steel can break, and so could Chris…

Introduction
I reckon we could call this story a “bromance” — even though it was published long before that particular word came into widespread, everyday use.
Its main focus is on the friendship between two pals — who have known each other since their university days — and how they cope with the tumultuous pressures of being RAF pilots at the height of the Battle of Britain and beyond.
Naturally, both men are very different. David Gouldie’s quiet introspection is a neat counterpoint to Chris Bennet’s dashing showmanship — but it seems that he really is putting on a show…
Scott Montgomery, Deputy Editor