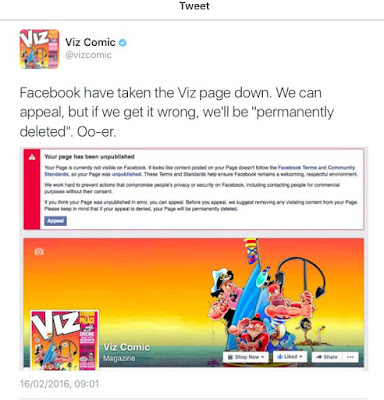 Original story:
Facebook, the multi-million dollar social network site that happily allows everything from photos of fluffy kittens and snapshots of people's dinners to pouting pubescent selfies, images of roadkill, far right groups such as Britain First and the English Defence League, and worse, have today suspended the official page of Viz Comic.

Viz, the most successful and longest-running adult comic in the UK, posted the news on their Twitter page this morning. (See screen grab above.) It included the statement from Facebook that the Viz Page did not follow the "Facebook Terms and Community Standards". While the statement said Viz could appeal, it also warned that if the appeal was denied they'd be permanently banned.

Presumably Facebook must have received complaints about the page for them to take such censorious action. But what sort of ninny would complain about a comic when there are so many horrors happening in the world to rail against? (Yeah, sadly people like that do exist, I know.)

Support Viz by buying the latest issue, available from the top shelves of shops now. 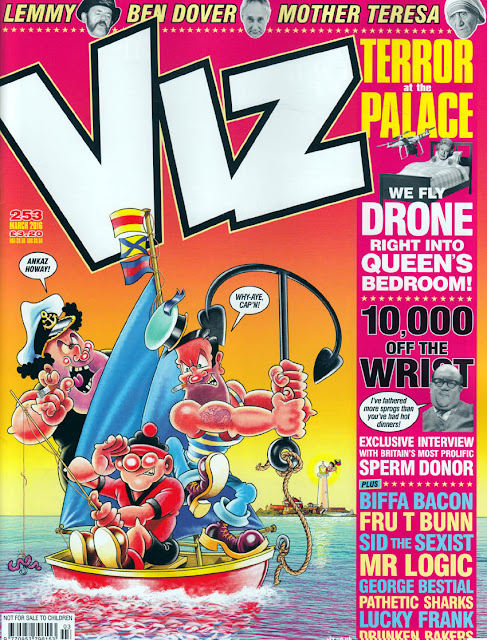 Wow as you state when you see some of the crap / filth that Facebook allows including "secret" paedophile pages that they only acted on after the BBC reported on them (for a second time) this is very strange indeed. As someone who hasn’t got a Facebook page I'm not sure on their policy - maybe you can't run a business from there etc. I hope they are not using the “VIz” page as a "sacrificial goat" to say to the media “look we took down this site that could corrupt kids now leave us alone were doing all we can to protect kids etc…”

There are numerous magazines and organizations using Facebook to promote their businesses, Paul. I have a page myself:
https://www.facebook.com/lewstringercartoonist/

The ban on Viz will be down to some spiteful idiot complaining to Facebook. Hopefully it can be resolved. The national press will be reporting on it later.

well.. anything that moves people further away from that.. 'thing' that is facebook, and thus making the computers of the users saver (the amount of virus infections via that place ¬_¬ gee it's a pain) is a good thing.

However, the viz site underwent a redo a few months ago which means TONS of ads on each page which is.. not nice at all..

I hadn't noticed Intrusive extra ads or viruses. Besides, this won't move anyone off Facebook. No one goes there just to visit one page. This is far from a good thing in my opinion because it's censorship of something that was completely harmless, whilst still allowing free reign to fascist nutjob organisations, sexism, and worse.

I probably see more cause I don't use a lot of blockers because I work on script enough to not want it stopped most of the time. Also use debuggers and bits at times.

also just checked and it looks like it's been redesign a bit again since the last time I visited.. which was end of last year I think. they put ads on every post, with a few adbars around too.. good they got rid of them. Ad bars if used right, and sparingly can be a good way to cover hosting bills, but too much and bad ones (like adwords) turn off your visitors ^_^

Manic Man, you could just use Adblock.

there are.. a large number of problems with Adblock and the like. And as just clicking on an ad can bring a couple of pence to help pay the hosting bills, it's also a bit.. more problematic. As they are mostly content filters they can remove more then what should be, and of course, gives a small delay on page rendering.

I don't see ANY ads on the Viz FB page apart from their own spoof ads. It must be your settings.

like I said, they have toned down a lot but scroll down on the site bar under 'Stalk viz around the web' is 'SPONSORED LINKS' which are adverts using Taboola's system. the javascript insert is lines 195 to 206 of the mark up. some blocks can remove stuff but.. I've said about them ^^

I don't see any sponsored links, Manic. Perhaps your settings are different to mine. I've just posted a screen grab on the next post.