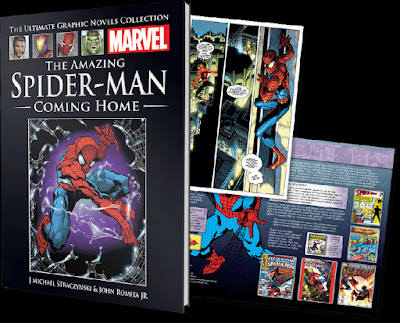 Even though the fortnightly partwork Marvel Graphic Novel Collection is still running, Hachette have just relaunched it again this week from issue 1. The first edition is in WH Smith and other shops now priced £1.99. It looks as though these reprints will follow the exact same order and content as the original run.

I understand it's quite common practice with partworks to relaunch before the original series concludes, as usually the issues have gone to subscription-only many months before any relaunch. However in this case, the books were still regularly on sale in some shops due to their popularity. 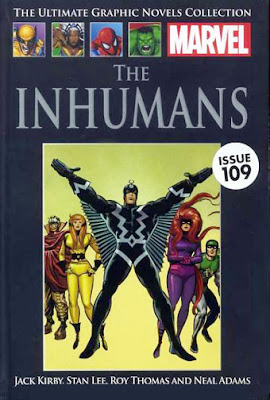 So, this week you can either choose between volume 109 (The Inhumans) at £9.99 or restart from volume 1 (Spider-Man) at the starter price of £1.99. The old series may be winding down but according to the recent Previews catalogues a few more are still scheduled for the next few months. (I just hope this doesn't cause confusion with wholesalers and newsagents reserving the wrong books for long-standing orders!)

The series is due to finish at volume 120 so there's still almost 6 months to go, I'm going to have to explain it to my local newsie when "new" series starts coming in. The other Hachette partwork "Marvel's Mightiest Heroes is currently up to volume 55 and has recently been announced that it is being extended to volume 100.

Sad to hear that the ongoing series may be ending soon it really is a great set of books especially the classics (60 -70s in my case) reprint editions. I don’t get them all but I have quite a few and so far everyone has been more than worth the £9.99 cover price - I will adding “The Inhumans” edition to my collection as well. I missed a few of the earlier editions so might catch some of them if they are starting again.

The relaunch is in newsagents now Anon, so you'd best tell him as a soon as possible.

Paul, it was already extended due to popularity and they'd been doing sixties/seventies stories recently which was nice to see. I bought the previous one which reprinted the Kree-Skrull War as I didn't have the early chapters in single issue form.

It'd be nice to see old British strips reprinted like this but very unlikely really. Marvel is a huge brand but classic UK strips, not so much.

I'm really enjoying the sixties and seventies reprints (I am going to pick up the recent Iron Man edition later today on the way home from work) I can't afford (well more I'm not willing) to pay the sometimes exorbitant prices asked for some back issues so this is a great alternative to pick up those missing issues from a collection (or longed for single issues you may want- more what I look for) and at the same time are a great wee read.

Oh a UK comic strips version of these books are the things of fanboy dreams aren't they ?- if only - I am probably "too close to it" to see that it is not a commercial option nowadays but part of me thinks, if done correctly, it could work (a Leo Baxendale and Ken Reid edition of Odhams strips , Don Lawrence work, House of Dollman, Adam Eterno sigh!!)

There are some copyright-infringing works around and pirated discs sold unofficially that I'd never support for ethical reasons but the best way to show publishers there's an interest in old UK strips is to support the officially licensed books. Stuff like the ones Hibernia and Titan published, and that Dandy/Beano Christmas covers book that Phil Rushton published.

Some strips are unlikely to ever see print again, sadly, as the potential audience is shrinking all the time. Anyone for a Weary Willie and Tired Tim book? Thought not.

Your right I think we all tend to forget at times just how long ago these strips were and time and tastes moves on (still!! lol) - I have 2 of the Hibernia books (bought for me by others) and they are pretty good.

When I discovered comics fandom in the 1970s I first presumed everyone would have the same range of interests as I did, ie: an interest in the entire history of comics. Sadly I soon realised that most fans were only interested in the present, or their own nostalgia. And most were totally dismissive of British comics. Things have improved a bit over the years but in regards to reprint collections a lot of collectors will only buy stories they're familiar with. And even then, some people will hold out on the hope they'll pick them up from a car boot sale at 50p. There's no real incentive for any publisher to do a compilation of vintage British strips from, say, the 1940s or before. Shame.