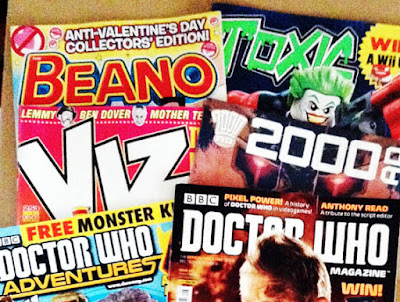 Over on the Down the Tubes blog, John Freeman has the circulation figures for British comics for the last six months. While no one is saying the British comics industry is thriving it's definitely holding its own, with some titles showing an increase in sales.

True, sales look grim compared to 40 or 50 years ago, but the world has changed with more things competing for people's leisure time. (Even TV shows don't get the same viewing figures as they did decades ago.) The important thing is that there are still British comics being bought in their thousands. (With some outselling most American comics.) Toxic and The Beano even rank in the top 100 UK magazine sales. Yes, some people will always focus on the negative for reasons of their own, but true comics fans will support the industry.

You can see the figures for yourself over at this link:
http://downthetubes.net/?p=29163

Any thoughts on the matter? Post your opinions below. All comments welcome. (Only spam and abusive comments are blocked on this blog but all comments are held until I log on again, so if yours doesn't appear right away don't resend it multiple times. Thanks.)
Posted by Lew Stringer at 12:39

I don't think that's going to happen just yet Colin, although there are already digital versions of many publications of course so it's a possibility. At the moment though print is more viable for most.

Not too sure why you're concerned Colin. Newspapers were originally designed for the immediacy of their delivery of news, this is no longer the case with 24-hour news channels and the internet. Trash like Murdoch's tabloids and the Mail prey on certain types of minds with their opinion-as-fact scaremongering to generate sales, but for papers like The Independent which, by its very name, was just about presenting the facts then that's what people use online news sources for these days. But comics aren't news; they're a product so this shouldn't have any correlation.

You also have to understand we're all grown adults now and children's comics are, well, for children and it's them they should appeal to, not us. Whether it's a printed monthly comic or a digital comic, whether it's regular or semi-regular, whether the comics are inside a children's magazine or in a book, comics creators are busy working away on a huge (huge!) variety of content for children. Children today are more technically savvy and we'll see the printed titles continue but more and more digital comics come along. Whose to say children will want a weekly or even monthly regular title? They may want to buy a variety of different semi-regular titles constantly. They may also want standard reading material or they may want fully interactive comics.

Just as the music industry has evolved so are comics beginning to, and British talent is really grabbing those new avenues and possibilities and seeing where they go. Some still prefer to buy physical CDs and they're still there but I prefer iTunes. But I prefer reading books and magazines physically but many (and more and more) prefer digital and interactive ways of reading. Things change and should be embraced and celebrated, after all comics had already changed and evolved into what we enjoyed as kids :)

Looking at the top sellers its clear there is still a market for branded content aimed at the younger reader (Frozen, Peppa, Cbeebies etc), I think the issue for the magazine industry is how to keep a large percentage of those readers as they grow older.

And eek at those figures for Doctor Who Magazine, I can see why Adventures is losing circulation as the show isnt as kid friendly as it used to be but for the main mag to lose that much circulation must be a worry ahead of a year with no episode until Christmas.

DWM is actually up in sales, Duncan. I'm going to look into this because that chart seems wrong on that bit. DWM hasn't lost 20% of its readers.