Memories of ACTION, 40 years on 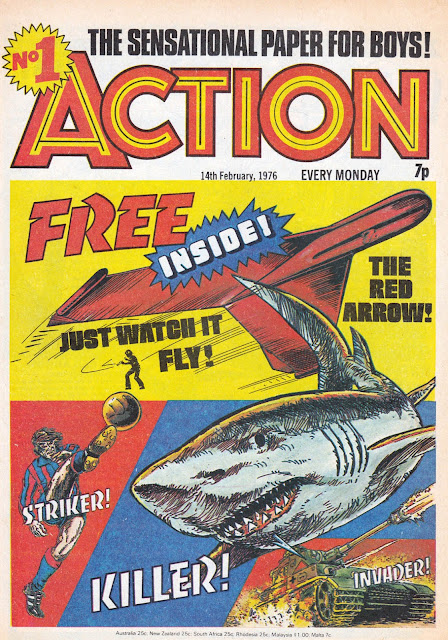 Continuing my celebration of the controversial Action weekly comic which was launched 40 years ago on Saturday 7th February 1976, here's a selection of its most dynamic covers. 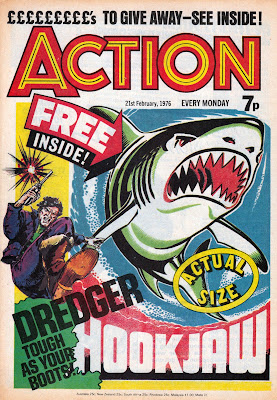 For me, Action arrived at just the right time. I was 16 and had naturally outgrown the standard British humour comics such as The Beano and Whizzer and Chips. The British adventure comics of the time were too juvenile for me then too, except for Battle Picture Weekly and possibly Warlord, but I was never into war comics. I'd left school the previous summer, was working in the office of a mining tools company, and had abandoned any ambitions to work in comics. I still liked comics though, and bought the ones for older readers such as the Marvel horror comics (Tales of the Zombie etc) and some superhero titles, and I'd enjoyed the short-lived Atlas Comics until they went bust. However, as far as the UK market went, there seemed little to interest me outside of the Marvel UK reprints.
Then along came Action, full of attitude, tightly written, dramatically illustrated, and very much of the moment. Although I was perhaps slightly older than its intended audience I was hooked by Hook Jaw and the rest of its robust content. Sadly it wasn't to last. The establishment got its knickers in a twist over the violent tone of the comic, dubbed it "The sevenpenny nightmare" and called for it to be banned. IPC had little choice. After 36 issues they suspended Action for a few months, then relaunched it in a neutered form. I didn't buy many of those issues. It had lost its energy.

I'd have probably given up on British comics altogether at that stage if it hadn't been for 2000AD launching in 1977. Action was still around in its deflated form but 2000AD had the spirit and guts that Action had lost. Even more so in fact. I discovered comics fandom around that time too and by 1980 I'd quit my dead-end job, reignited my ambition to work in comics, and started buying British comics again to look at them from a more creative viewpoint. I turned pro in 1983 and haven't looked back, thanks to Action being one of the few comics that kept my interest in the form alive way back when.

Anyway, on with more covers. Click each one to see it much larger. 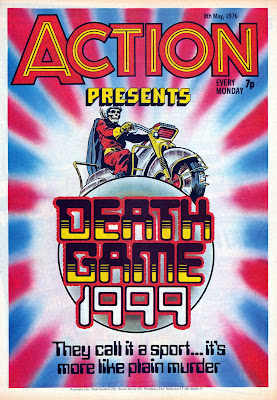 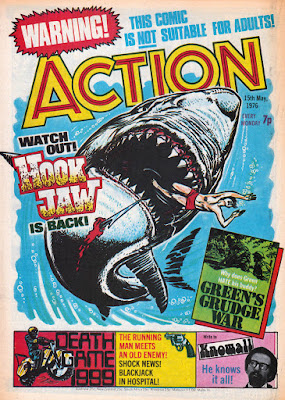 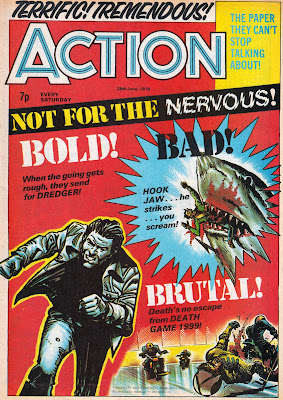 The issue above was the last to be printed by Carlisle Web Offset. The following week, Action went to a cheaper newsprint format which meant fully painted colour wouldn't reproduce well so they had to make do with flat colour overlays. However the energetic nature of the covers remained which was the main thing... 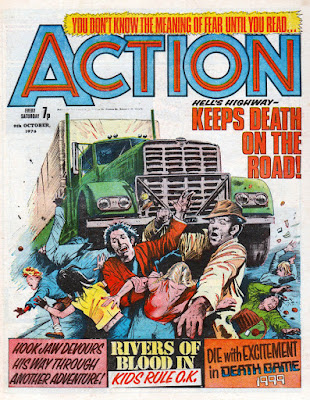 All the above are scanned from my collection but the following two are from elsewhere on the 'net. Here's Action's most controversial cover, drawn by Carlos Ezquerra. Critics thought it was a policeman cowering in the foreground due to the clothes being mistakenly coloured blue like the helmet... 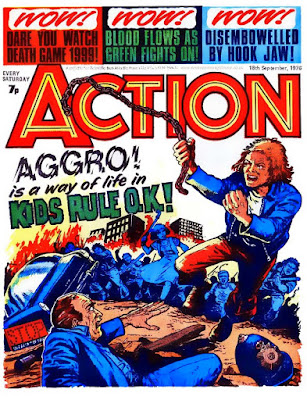 Here's the final issue of the pre-ban run, which never went into general circulation and only had a very small print run. This issue fetched over £1,300 on eBay last year... 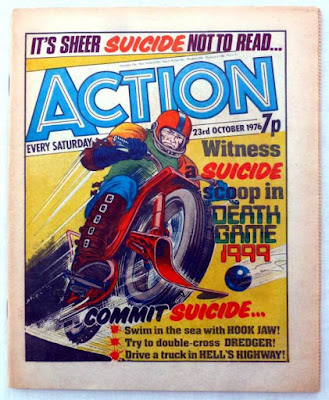 Not only were the contents of that rare issue censored and re-used in the relaunched issues, so was the cover. This is the second post-ban issue of Action from December 1976... 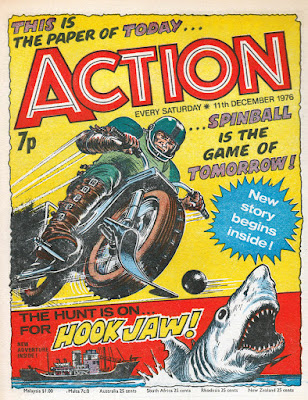 If you're interested in the history of this memorable comic, I recommend hunting down Action: The Story of a Violent Comic by Martin Barker. Not only does it contain background information on the comic it also reprints many selected episodes including the banned unseen ones and compares them to the published censored versions. A fascinating read! 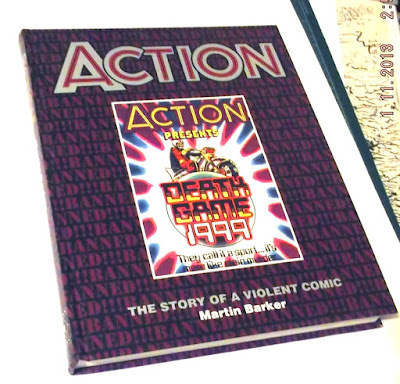 I had forgotten I picked up the first issue of "Action" until I saw the cover here - I think I picked up a few of the first 5 or 6 issues but for me I think I was only interested in US comics by this time (mostly Conan and Swamp Thing and the black and white titles) so it mostly passed me by and I missed all the controversy over its "violence" . In hindsight 76 - 79 was a good time for UK comics with Action, 2000AD etc but titles like “Bullet” I’m afraid left me very cold.

Did Action have an annual at any point? I remember reading a friend's annual which had Hook Jaw in it and even though the story was ripped straight from Jaws (a mayor wants to keep the beaches open while the shark is about because he's being threatened by the local mob) I thoroughly enjoyed it.

Yes Phil, there were a few Action Annuals, all tamer than the weekly though. Years later there was a reprint monthly called 'All-Action' I think, that reprinted the milder strips from Action and otter comics.

Paul, I posted a link yesterday to an old blog post where I showed some of the contents to issue 1, in case you missed that post.

I was 14 when I first became aware of 'Action.' I read the Sun article about it, and knew I had to get a copy. The first issue I bought days later was the one when 'Death Game 1999' began. I bought it then each week until it re-appeared in its muted incarnation and I stopped buying it shortly afterwards.

It's quite telling that so many readers dropped Action due to the changes. It just became yet another IPC adventure title after that. Perhaps IPC should have stuck to their guns but I imagine retailers and the media could have made things even more difficult if they had (possibly blacklisting all IPC's titles). What was a shame though is that IPC's subsequent comics, such as Speed and Eagle, had a much softer edge to them than Action, Battle, and 2000AD.

The post-ban Action was not neutered. The writers did not have the skill and talent to produce good stories without using violence. So the stories were dull and lightweight. Exciting as pre-ban Action was, the 'staid' yawn) Victor, Hotspur and even Wizard had gripping stuff without the need for, well you know... And while Bullet did not stray far from DC Thomson's parameters it managed to have good stuff in it: and lasted longer than Action so clearly was doing something right.

I think we can safely say that writers such as Pat Mills certainly had the skill and talent, anonymous. Action wasn't all about violence, but of course it was neutered if it had its energy ripped out of it.

As for Bullet lasting longer, bear in mind that back then D.C. Thomson owned their own printing presses so could produce comics more cheaply than their rivals. Consequently their comics could last longer when sales declined.

Yes, Victor and Hotspur gripped the readers in their heyday but by the 1970s things were changing. The gentler style of comic was going out of favour. (See the failures of Thunder and Jet for example.) Thomson's launched Warlord as a tougher comic, inspiring IPC to follow suit.