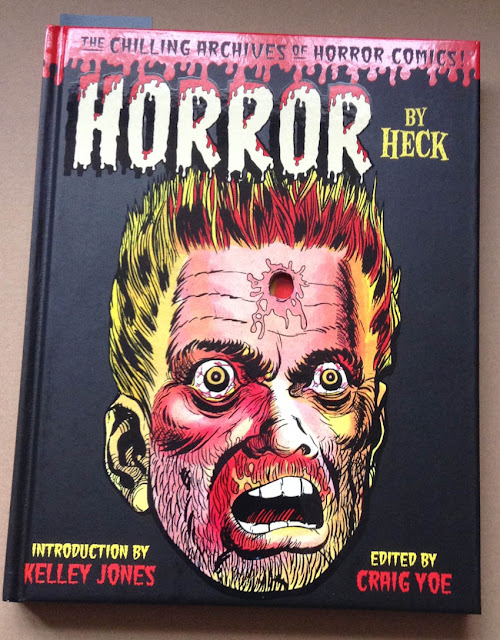 I've always liked the work of Don Heck and thought the dismissal of his style by some people overlooked the talents he had. After all, this was a guy who was one of the main artists at the dawn of The Marvel Age of Comics in the 1960's. He was the co-creator of Iron Man and had a memorable stint on The Avengers amongst other comics. Before that he illustrated many short stories for non-superhero genres. Now Craig Yoe and his Yoe Books team have compiled a hardback selection of Don Heck's great 1950s horror comics stories in the latest volume of The Chilling Archives of Horror Comics. 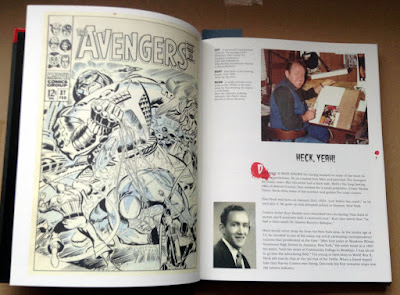 Horror By Heck is a faithful reproduction of those forgotten strips and proves what a great artist Don Heck was. The choice of cover image was obvious, - it had to be the notorious bullet wound cover from Horrific No.3 (Jan 1953) but Yoe Books take it a stage further and it's an actual die cut hole in the cover! Ban this filth! No, sorry, BUY this filth! 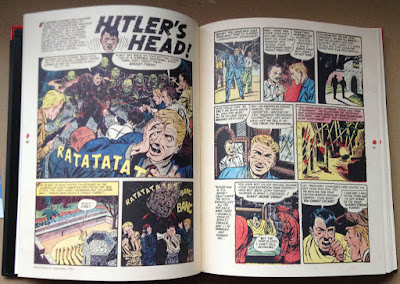 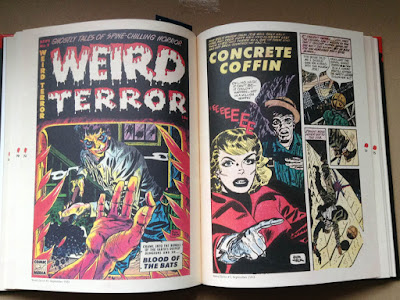 Hi Lew..Yes Don Heck was always seen as the also-ran in the Marvel "bullpen" to many fans back then . It was unfortunate that he worked in the same shadow as iconic creators like Ditko and Kirby who had more solid stylistic approaches . They were also enhanced by some great solid inking which dramatically lifted their work above average.I "got" Kirby and Ditko right away when I first came across them even though I had no idea at that time how pencilling and inking actually worked in comics.We just thought these artists simply drew the whole stories up in that crisp style .I started noticing the different styles. Someone like Gene Colan or "Adam Austin" as I think he initially worked as also produced such drama and exaggeration.and John Buscema was great at heroic stuff. I certainly had no idea how comics were put together when I first started reading them in the late 1950's and early 1960's.Heck's style seemed sketchier and less "solid" by comparison to some of those mentioned so it wasn't until i tried drawing some things myself that I understood my own limitations and understood just how good someone like Heck actually was. I say that if you can draw as well as Heck or better then maybe you can judge him.

I think Don Heck's best work was when he inked his own pencils. Some of those early Iron Man stories were superb examples. I also liked the short stories he did for Astonish, etc. Discovering his 1950s work has been a revelation.

Many thanks for the review, Lew. On the strength of that I've ordered a copy and I'm very much looking forward to a good read as I wasn't familiar with Don Heck's work and I'm becoming very interested in 1950s art. Can you recommend any other similar works?

Hi Stuart,
All of the Yoe Books are worth exploring if you like the Heck one. Personally I like Bob Powell's work. Here's the Yoe Books website to
tempt you:
http://yoebooks.com/