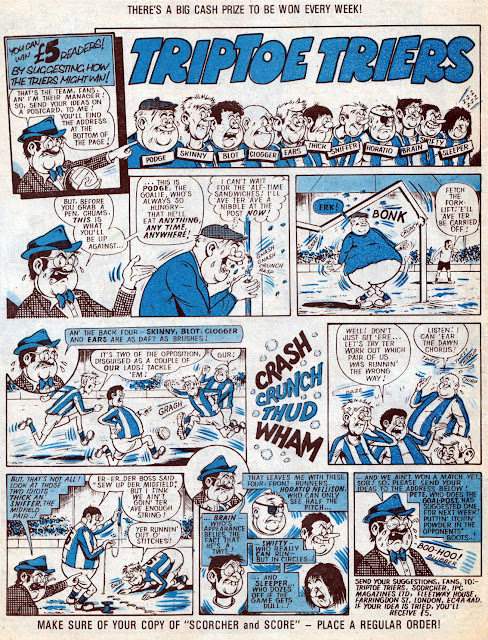 Here we are, finally on the last of Ken Reid's humour strips he did for Scorcher comic. Triptoe Triers started in Scorcher and Score dated 24th August 1974... and finished in the issue dated 5th October. Yes, just seven short weeks! The final one appeared in the last issue of Scorcher before it merged into Tiger.

Interestingly Triptoe Triers was a reader participation strip, encouraging kids to send in ideas in the hope of winning a fiver. (Similar to Ken's Dare-A-Day Davy for Pow! in that respect.) This suggests to me that the strip was intended to have a longer run as they were still asking for suggestions the week before the final issue. Perhaps the Scorcher editor's hope was that it would move over to the merged Tiger and Scorcher but sadly that didn't happen. The reason can't be lack of popularity, as it wasn't around long enough to gauge proper feedback. (With an eight week lead-in time being the norm, the last issue of Scorcher would have been put together before the one with the Triptoe Triers hit the newsagents.) Perhaps the editor of Tiger just didn't 'get' Ken's humour? Who knows?

Anyway, for whatever reasons, Triptoe Triers only lasted for seven weeks, and here they are in order of publication... 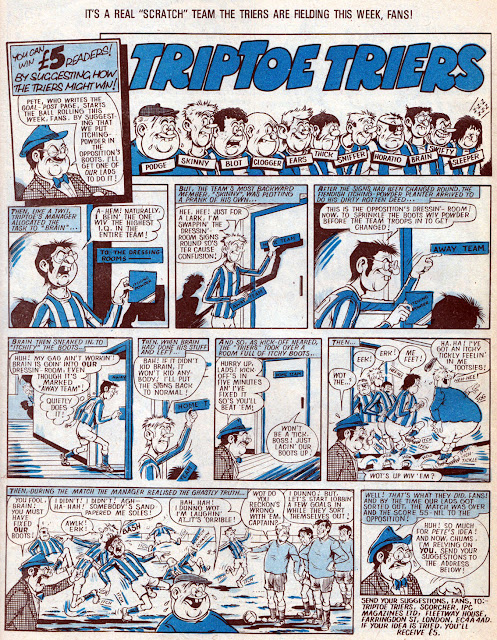 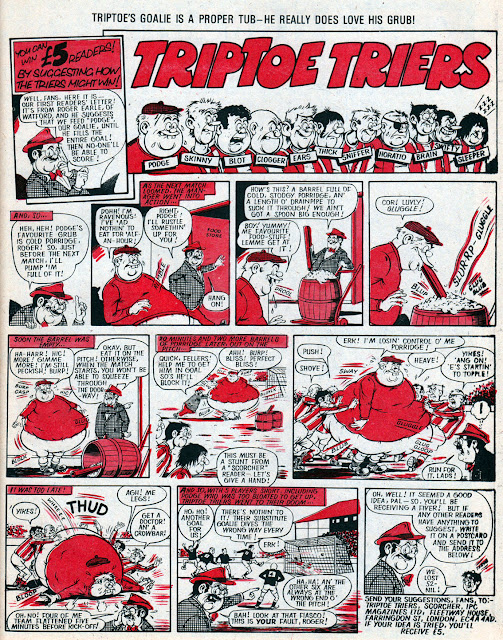 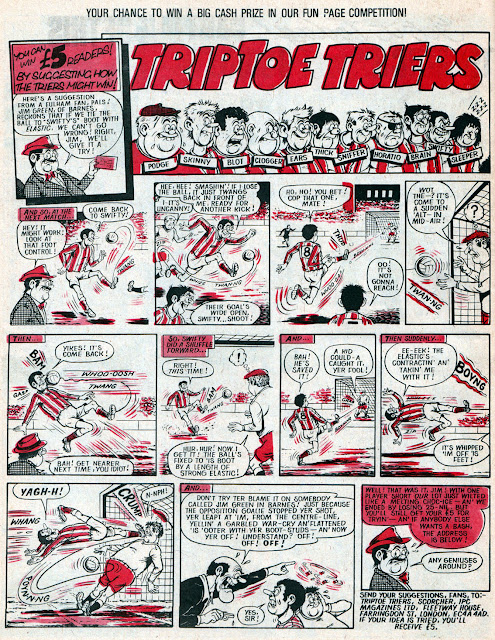 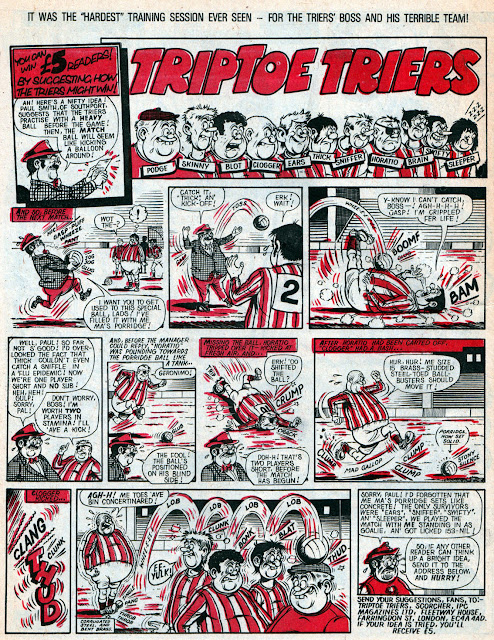 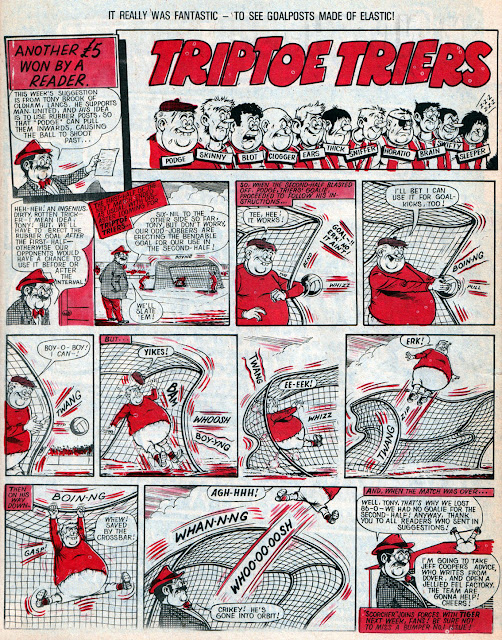 ...and that was it for Ken Reid working on IPC's adventure comics, after being in almost every issue of Scorcher throughout its almost-five year run. Fortunately he was already on Buster at this stage, thanks to it absorbing Jet, and was producing work for the humour group on Whoopee! and would soon be creating material for Shiver and Shake.


Here's a cross-reference of all the other series that Ken Reid did for Scorcher. Have fun!

I'm not a football fan, but I enjoyed this look at Ken Reid's work in Scorcher. One thing I could never understand though is why did they have black text on a solid magenta red background. It seems to make the text a bit hard to read.

I suppose the staff colourists were told to make each panel as colourful as possible within the limitations of spot colour but I agree it's not good to put solid colour over speech balloons.

I'm not a football fan either ( never even been to a match) but I did find Scorcher entertaining. (Some of the scripts in the adventure strips are full of plot holes and inconsistencies though.)

If they were preparing the final issue before the first of these strips was in newsagents, how can any of them actually be ideas submitted by readers, as all but the first two were stated to be?

They'd make them up, James, just like they made up reader's letters sometimes. Strips were drawn at least seven to eight weeks in advance back then.

That's just plain dishonest. I hope they don't still do that sort of thing nowadays.

I suppose it was dishonest but there was no harm done. It was just a way to illustrate to children how ideas could be used in the strip, to encourage them to participate. Readers are more likely to join in if they see activity, rather than week after week of pleas for suggestions.

Other methods included the staff's children sending in ideas, letters, art etc. Again, it was just a way to keep the page active. These days the lead-in time to publication is much shorter thanks to technology making production faster so it's not so likely to happen today.

Thanks for showing these Lew - "Triptoe Triers" is one of Ken's strips I had only a pasing memory off and these look really good (imho one of Ken's best footy strips). Wasn't "Football Focus" also one of these strips that kids used to write in for - I wonder if Ken actively wanted to do these type of strips as he seems to do a lot including the "Creepy creation" type pages.

You're thinking of Football Forum, Paul. You'll find it in the list above.