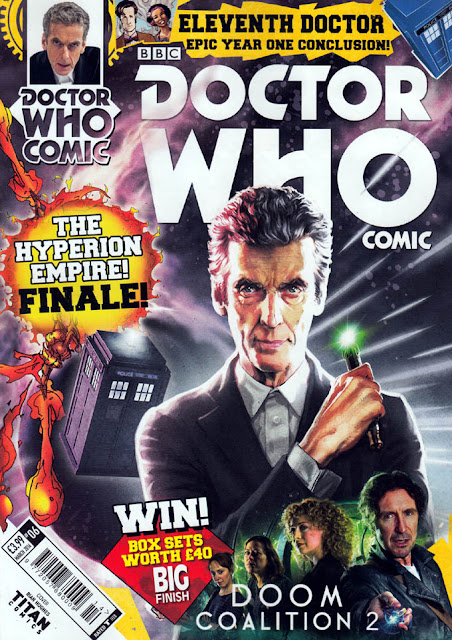 The issue of Doctor Who Comic that's in newsagents today is the final issue. From next month the strips move over to the companion title Tales From the TARDIS: Doctor Who Comic. It's kind of a merger but not stated as such.

Sadly, this isn't unexpected. Titan's decision to launch Doctor Who Comic as a nice big A4 size publication was a welcome move that showed off the art better but it immediately met with problems. Even though Titan had a 'Rated T teen' advisory on the barcode, most branches of WH Smith I visited tended to stock it alongside the younger readers comics such as The Beano and nursery titles. (In my local branch it was often tucked behind Doctor Who Adventures so no one could even see it!) In such circumstances it just wasn't being noticed by the intended older audience as it would if it was displayed in its correct place with SFX, Doctor Who Magazine, and the Titan and Panini US reprint comics.

Bizarre as it seems, I can only guess that Smiths staff made this decision based on the comic's size, as exactly the same thing occurred to Titan's Arrow and Superman comics in that format several years ago. Quite staggering really, considering publishers pay the shops a hefty fee for display space.

Next month, Tales From the TARDIS No.4 picks up the adventures of the 10th, 11th, and 12th Doctors. TftT is has a smaller US-style format so it's always displayed in the correct place.

Gave up on this as I could never find it in any of the 4 branches of Smiths near me (though I have started seeing it since giving up). Shame as the larger format really helped showcase the art. Killed by poor distribution at the start I'd say.

All my local branches had it but every one had it in the wrong part of the shop. Doing a quick count of the issues over four weeks I was the only person here buying it. Probably because the staff kept hiding it behind Lego kids magazines etc.

Looks like Titan have had a lot of unsold copies returned, for there's an ad in DWC 2.6 showing all the covers except for last month's, advertising back issues.

The same was happening in my area. I often couldn't find the title and it would either be with the childrens comics or occasionally with DWM. There were times I couldn't find it at all.

Shame, perhaps Titan should have considered another reboot from issue 1 in TftT format.

I suspect TftT was launched partly to use up material so Titan's newsstand comic could catch up with the comic shop editions. They're now just three months behind which is good.

James, Titan always advertise back issues of their comics. As Titan have close links with Forbidden Planet (ie: same owner) who stock their titles I imagine they have a surplus of copies printed.

I'm not a big Dr Who fan (TV or the comic ) the character never really engaged me the way is has for so many other folk but wasn't this particular comic aimed at kids and in the right place? (sorry I don't know the content)if not you would have thought due to the popularity of Dr Who that would be an ideal comic audience for a comic with more cartoon style art (like your own strip Lew )

You might be thinking of Doctor Who Adventures, Paul, which has a lighter style and is aimed at children. As I said, Doctor Who Comic had a 'Rated T teen' advisory on the cover. Smiths are supposed to stock it next to SFX, 2000AD, Mighty World of Marvel etc.

Ahh that's the comic I was thinking of t Lew, I have read an issue of that and was getting mixed up sorry about that.

The back issue ads don't usually show ALL the covers though. Issue 1 is a year old now, and still not sold out? That does seem rather unusual.

One thing I'm still wondering is about Asda and other supermarkets, which stocked DWC but not TftT. Will they now stock TftT? Asda, to their credit, had DWC right next to DWM where it belonged, but don't sell any of the Panini Marvel or Titan DC collector's editions, whose format TftT shares.

The problem is that more and more branches of WH Smith are now racking the Collectors Edition format titles behind the tills... making them all but impossible to find and browse.

This was once explained to me as a way of preventing theft but I think it might also be down to the squeeze on space allocated to periodicals in favour of greetings cards and stationary. Both presumably with much higher margins than print.

They told me it was due to theft too. I'm not convinced. Besides, it's up to shops to prevent theft, not damage sales of comics by hiding them. It's ridiculous.

Cards and stationery sell well but those comics do ok too. It wouldn't make sense to only select Panini and Titan comics for behind the counter sales and not other magazines. I don't know what the real reason is but, from what editors have told me, the shops are not informing the publishers of their decision.

This is a real shame as I was starting to enjoy these larger than life Dr Who strips!I picked mine up from the local tesco's or the small Smith's shop down in the ferry port. Tesco's always stacked their copies with Empire, Starburst and the like whereas the local Smith's displayed them with all the other US format comics. When they first hit the stands, you would always find about 6-7 copies but the last couple of issues this number shrunk down to only 2. I still pick up TFtT though and will continue to do so as long as they remain on the newstands etc.

I'm glad to hear that at least your Tesco and WH Smith had displayed the comic in the correct place and not with the younger reader titles. If all the branches had done that, as instructed, then perhaps DWC would have survived longer.