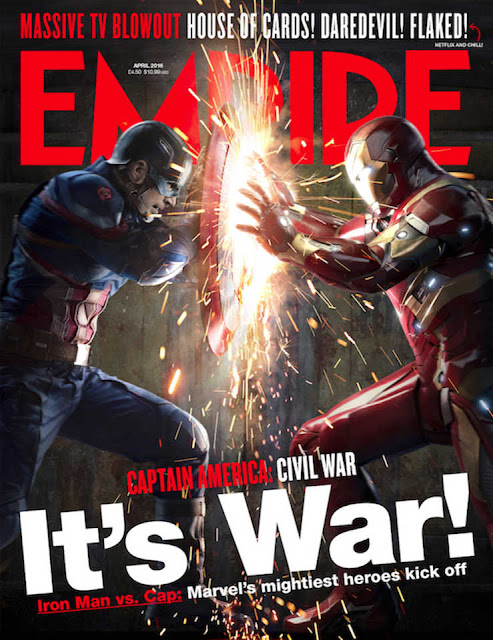 For those of us who grew up in the 1960s discovering the Marvel superheroes in Fantastic, Terrific, and the other 'Power Comics', who could have imagined that one day the characters would appear in live action Hollywood blockbusters that would become some of the most popular films in history? Now here we are in 2016 with numerous superhero movies and more on the way! Look out for the next issue of the UK's top film magazine, Empire, on sale 25th February, for an exclusive Captain America vs Iron Man cover (inspired by Steve McNiven's cover for Civil War No.7) and content related to the upcoming Captain America: Civil War movie!
http://www.empireonline.com/movies/captain-america-civil-war/civil-war-captain-america-iron-man-empire-cover/
Posted by Lew Stringer at 12:44

Email ThisBlogThis!Share to TwitterShare to FacebookShare to Pinterest
Labels: Fantastic

Superhero/sci-fi films never win Oscars but they are always on the covers of magazines like Empire and Total Film - in fact, those magazines never feature anything else on their covers :D

Those movies put bums on seats and sell magazines, Colin, despite any lack of awards from the Hollywood elite, so I can see why film mags are eager to feature them on their covers. I don't always buy Empire but I'll be buying it this month for sure.