On this day in 1957, Andy Capp first appeared in the Northern edition of the Daily Mirror. Initially a gag cartoon before later becoming a strip, Andy was the creation of cartoonist Reg Smythe.
Andy Capp struck a chord with its working class readers and became a national institution. My parents and my grandad read the strip, and it seemed like everyone knew who Andy Capp was. He was so popular, and so respected by the paper, that his strip even appeared on the cover of the Christmas edition in 1966. 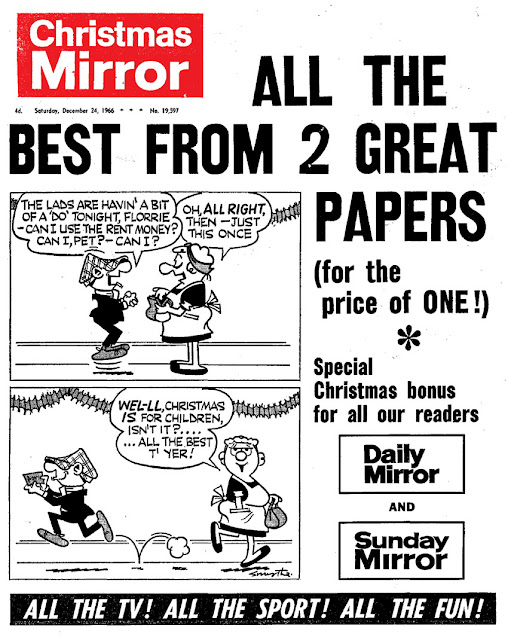 Young comics creators today yearn for comics to be accepted by the general public. It already happened decades ago! Once upon a time the public loved newspaper strips and characters such as Andy Capp became household names. The Andy Capp collections, published twice a year, were read by blokes in the pub and by dads on holiday. Other newspaper strip collections such as Bill Tidy's Fosdyke Saga were also popular with adults. Sadly, over the years, comics have fallen out of favour with young and old, and the UK industry, down but not out, is not what it once was.

Perhaps this explains why today's Daily Mirror makes no mention of Andy Capp's 60th anniversary. Not even a jokey line in their celebrity birthday listings. In fairness, they could be waiting until 17th August, which a recent article claimed was the actual anniversary. (Presumably this was when it appeared in the London edition.)

Reg Smythe passed away years ago but his strip is still going strong, seven days a week, ably produced by writers Lawrence Goldsmith and Sean Garnett and drawn by Roger Mahoney. As previously reported here, a new collection of their Andy Capp strips is to be published soon.

There's been some criticism this week that Andy Capp is too "politically correct" these days. Certainly his profile lost part of its distinctive look when the character lost his ever-present cigarette, but aspects such as beating up his wife Flo (or her reciprocating) stopped being funny a long time ago. Changes were necessary when the strip became syndicated around the world, but the essence and look of the character remains intact and the strip still raises a laugh.

In these dark days of newspaper cutbacks, the fact that Andy Capp has been running consecutively for 60 years is something to celebrate. Cheers, Andy!

Here's an article I wrote for the strip's 50th anniversary ten years ago:
https://lewstringer.blogspot.co.uk/2007/08/andy-capp-is-fifty.html
Posted by Lew Stringer at 14:04

I get it... Don't want to sound like a dinosaur.,, But the drinking, sloth, and wife beating made me laugh as a young boy back in the early 70s. Dennis the Menace getting the slipper in countless ways was funny too. When my kids read my old DMs in the 2000s they laughed and laughed. Is there no place anymore for this in modern comics? Seems odd since superhero comics as violent and racy as ever? Just asking, not trying to offend anyone who suffered from alcoholism.

Well, superhero comics aren't using violence as humour are they? And Marvel and DC don't actually use domestic abuse or corporal punishment as entertainment. Completely different world to that of Andy Capp and Dennis the Menace.

If you follow Andy Capp you'll see he's still lazy and he still likes a drink, so that's still there. I don't think that the absence of jokes where Andy and Flo have a dustcloud fight has affected the quality of the strip at all. Jokes where Andy gives Flo a black eye are certainly not missed.

I don't think there's any justification for showing children being spanked in modern comics. Let's look at it in perspective. Caning was banned in schools decades ago. Such treatment vanished from comics at least 30 years ago! It's not a "modern" change. I've certainly never been asked to, or felt inclined to, draw such scenes in 34 years of working in comics.

Sure, there were some inventive and funny ways that Dennis was punished back in the sixties. (A slipper fired out of a cannon comes to mind.) That sort of stuff was never the main attraction of comics though, - at least I hope it wasn't! In many ways it became a lazy way to end a story.

When I was doing Tom Thug I felt it was necessary to show the punishment fitting the crime as it were, so Tom's bullying and mischief would backfire on him. He'd often end up bruised and battered but it was either by accident or by retribution from another kid, never a slippering or a caning.

The old corporal punishment endings in comics are long gone thankfully, and may they never return. (Before you ask, no I was never caned or slippered, so it's not a personal resentment against it.)

A long answer but it's something I felt needed saying as I've read quite a few comments online where people yearn for the days of seeing kids being spanked in comics. I find it all a bit strange to be honest.

I, for one, yearn about humanity in comics, warts, spanking, and all! American comics have none of it anymore, but British humour strips still have it in spades, and Andy Capp is one of those I dream of drawing someday, though my chances may be slim :)