Commando comics out this week... 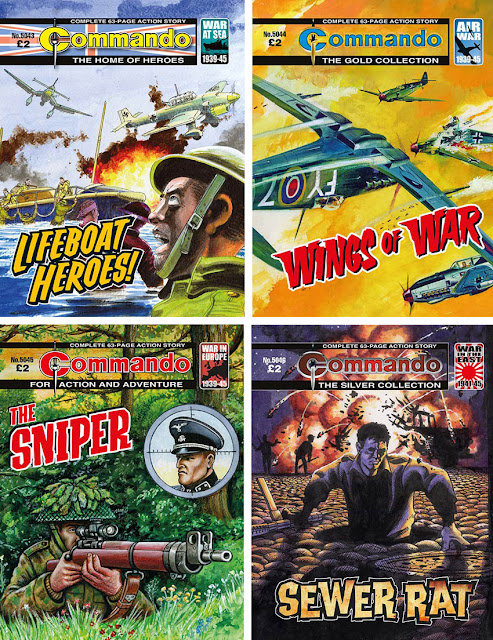 Brand new Commando issues 5043-5046 are out soon! Ready your guns for incoming Luftwaffe, Kriegsmarine and Wehrmacht as our Commandos face air, sea and land skirmishes against the Axis forces. From R.N.L.I. volunteers to Eastern street cleaners, our heroes come in all sizes.

Often dubbed ‘Weekend Warriors’, R.N.L.I. volunteers patrolled the dark waters of the Channel, rescuing the men they found from the icy drink, though their heroics were often overlooked and forgotten…

Keith Page’s instantly recognisable artwork matches and conveys both the humour and earnestness of Colin Watson’s story. This balance is always maintained, as the comically affronted facial expressions of the crew lighten the tone, while the perilous night-time rescue missions are filled with heavy blacks, sustaining a sense of dread throughout these darker moments. And Page’s cover is one such moment, showing the carnage of the Dunkirk evacuation in a stylised spectrum, from yellows and blues, to greens and even purples.

But these aerobatics are not lost in the issue’s interior as Repetto’s thin line strokes and attention to detail really add to the depth of the art, contouring the landscapes beneath the planes and giving more dimension to the aircraft. Meanwhile, Fitzsimmons pilot officer, Jack Mitchell is all edge, determined to beat his father’s WWI record for shooting down twenty-five Luftstreitkräfte planes, by any means necessary. Looking every inch the R.A.F. hero of Commando, Jack’s actions seem callous and downright deplorable as he shuns his fellow pilots and shoots down planes mercilessly.

5045: Action and Adventure: The Sniper

An expert marksman, Sergeant David Woking was the guardian angel of his squadron, taking out anything and anyone that threatened his men. But his superiors didn’t think too highly of snipers, or Woking’s rogue manner. Within this issue, Colin Watson takes full advantage of both Woking’s one-man battle and his time with his teammates, working on the individual characters and how these personalities interact. Jaume Forns then adds to these personas through his art, giving the precise, unerring Woking his thin moustache and bright eyes, and the mischievous Roger his freckles, adding to their charm.

Completing this is David Alexander’s cover art, mixing watercolour, acrylic and ink to create a traditional looking piece with its own quirks. Keeping our eponymous sniper front and centre, as he hides among the undergrowth, Alexander also inserts images of Woking’s targets, highlighting his deadly accuracy.

Finally, looks can be very deceiving in Mike Knowles story of a scruffy Lance-Corporal, dismissed immediately by his superiors for his careless appearance. Yes, Thomas Henshaw may have a bit of stubble and be rather inept at ironing, but his heart was in the right place. So, when his C.O. and crew are taken to a Japanese P.O.W. camp, he takes to the sewers, using the network of tunnels for raids and ambushes on the enemy. These underground systems are perfectly depicted in Keith Shone’s interior art, as he uses thick blocks of black for the background, highlighting the characters in white, as the shadows take over and appearances are rendered meaningless. And emphasising this theme is Alan Burrows cover, as Tom’s expression and figure is overcast in deep purple shadows, giving him a rather gothic look.

I think one of the aeroplanes is upside down, that's a mistake surely?

Shooting down enemy planes is more-or-less the actual job of a wartime fighter pilot... I suppose it was -enemy- planes?

I don't think the artist would have spent hours drawing it upside down by mistake, Robert. The story will explain it.