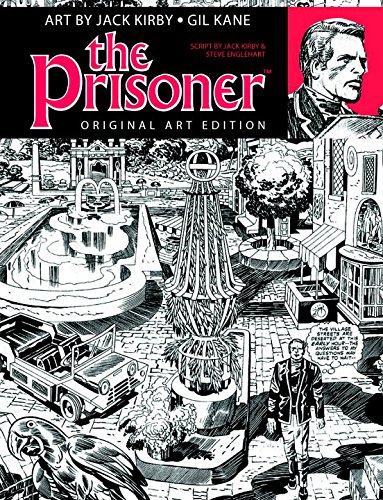 It's way in the future at the moment, but scheduled for March 2018 is The Prisoner Original Art Edition from Titan Books. A hardback collection of the pages produced for Marvel's aborted 1970s comics based on The Prisoner TV series of the sixties.

Jack Kirby produced one issue based on the script for Arrival, the first episode. His rendition of Patrick McGoohan was excellent (but McGoohan looked like a Kirby drawing anyway, which must have helped). Kirby depiction of The Village may not have accurately reflected Portmeirion (the real village where the series was filmed) but that didn't matter as the TV show took liberties with the layout of the place anyway.

Apparently Marvel were not happy with Kirby's first issue and it was abandoned by the publisher before all the pages had been inked. A new version was embarked upon by Gil Kane (written by Steve Englehart) but that too was never completed. The book will gather together all the pages and publish them officially for the first time. (Bootleg photocopy versions had circulated in Prisoner fandom many years ago, and some pages have also been officially shown in fanzines such as The Jack Kirby Collector. One fan even published a garishly coloured version, best avoided!)

The Prisoner Original Art Edition should be an interesting collectible for fans of The Prisoner and Jack Kirby alike. It's already available for pre-order from Amazon.

If you're interested in The Prisoner TV series, The Unmutual Website is essential reading:
https://www.theunmutual.co.uk
Posted by Lew Stringer at 00:00

I read an article on this once which said that The Prisoner was dropped because it did not fit into the Marvel universe... at a time when Marvel was publishing Man from Atlantis, Shogun Warriors, ROM, Human Fly, Godzilla etc etc

Hmm. Doesn't really add up, unless they meant the lack of action. The draft of the first episode that Kirby based his issue on lacked the fight scenes that were added for the transmitted episode, so it's a very "talky" comic for a 1970s Marvel.

What do you mean? I haven't come across that rumour.