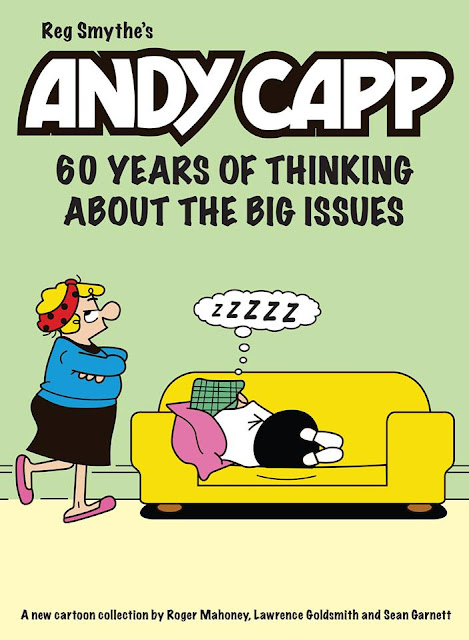 Andy Capp, the Daily Mirror's popular cartoon strip created by Reg Smythe, first appeared in the paper 60 years ago on 5th August 1957. From 1958, softback book collections began to appear, at a rate of two a year for several years. The collections proved to be a success with young and old alike. (My grandad was reading them in his 70s.)

As with most newspaper collections in the UK, the Andy Capp books have appeared less and less in recent times, even though the strip continues in the Daily Mirror 7 days a week. The last book was published in 2011 (by Titan) but this year will see it return with a collection of strips from the current team of Roger Mahoney, Lawrence Goldsmith, and Sean Garnett.

I'll post more about it at a later date but, for now, here's the cover to whet your appetite.

Here's an article I wrote about Andy when the character was 50:
https://lewstringer.blogspot.co.uk/2007/08/andy-capp-is-fifty.html
Posted by Lew Stringer at 17:53

Big Andy Capp fan from Chicago! Thanks for the update! How popular was Andy in the UK?

Very popular indeed. Our most popular newspaper strip, I'd say. There's more info at the link I posted.

Thanks for the link! I just read it. Good stuff! Did the UK have entire pages of comics like the US newspapers did and, for the time being, still do? Or was Andy always a stand-alone as the examples shown? We used to have 8 pages of color comics on Sunday, now it's down to 4. Weekdays are still 1 - 2 pages depending on the newspaper.

Andy Capp is one of three English strips that I used to read in the newspapers here in Canada, the others being Fred Basset and Alex. I still read Andy Capp as I have it, along with a number of other strips, sent to my inbox every day sometime after 9:00 pm my time.

Charlie, in the 1940s when paper rationing cut the Daily Mirror down to 8 pages, one whole page was devoted to strips and they'd have a couple of other strips on other pages. Comics were really seen as great escapism and morale boosters in the war. Other papers didn't devote quite as much space to strips as the Mirror but most carried strips.

Andy Capp started out in a different part of the paper as a stand alone (as did The Perishers and Jane) but eventually ended up on the strip page with others. Sadly, over the decades, the strip content in all UK papers has decreased. The Mirror now has a page of strips (shared with the horoscopes) but half of them are reprints. Only new ones are Andy Capp, Mandy, and the Gag Vault (and the latter often reuses old jokes but has them redrawn, hence the name).

We never had a tradition of a comics section, but The Sunday Times did have 'The Funday Times' as a pull out comic for a few years. Even that's gone now though.

It's a shame. Andy Capp was hugely popular with the public, particularly "blue collar workers" as you'd call them. My parents read the strips in the Mirror, as did my grandad. It amuses me when today's fans talk of making comics accessible to the general public. That had ALREADY been achieved decades ago, but it's been lost now for the most part.

I mentioned the Alex strip earlier. Although over here Andy Capp and Fred Basset always were to be found in the comic section of whichever newspaper ran them Alex appeared in The Globe and Mail's Business Report section.

of course, it shows how comics still have a place in UK newspapers.. even if the newspapers themselves are complete... Rubbish.

Also.. showing how popular Andy Capp was/is.. How many other newspaper comic strips had a semi-popular live-action TV show, a Debatable spin-off (I can't remember the full story with 'Mandy Capp') and a children's comic spin-off (again, loosely connected.. but more connected then Mandy)

Yes, Mandy Capp was supposed to be Andy's daughter I think, but that connection was later dropped and she's simply 'Mandy' these days with no reference to Andy Capp.

Just curious... is today's Andy Capp in the UK papers "politically incorrect" or did he change with the times? I mean, some of those strips... I still laugh hard when I read the paperbacks I have from the early 70s... really, really hard.

A nitpick, I know, but the Funday Times lasted about 17 years. That's a run which puts many an actual comic to shame.

What did last a few years was Disney Mirror, which came with the Daily Mirror every Saturday. That ran for a decent 160 issues between '91-'94. Liked that for two reasons: Gottfredson reprints and the ability to keep the kids quiet for half hour or so.

Thanks Kal. I didn't realise The Funday Times lasted for so long! Very impressive. I'd forgotten about Disney Mirror! Thanks for the reminder.