COMMANDO comics in shops this week 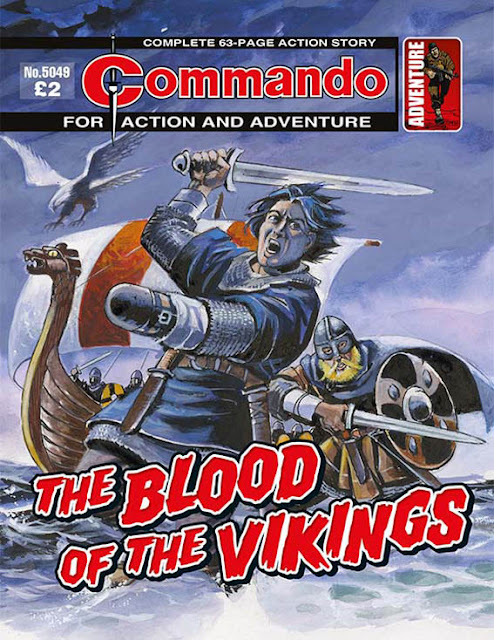 Here's the info direct from D.C. Thomson on the four issues of Commando that will be on sale from Thursday 24th August...

Janek’s life-like cover shows rival ships off the coast of Greenland, the bleak, icy water, just as threatening as the warships battling on them, while Vicente Alcazar’s thick black lines and heavy shading brings a moody darkness to Iain McLaughlin’s original story.

Set in Autumn, 1941, America had not yet joined in the Second World War, but that didn’t stop people like Charlie Dayton getting involved. Never shying away from a fight, Charlie’s strong views usually turned into something a bit more physical, so when the war in Europe started, Charlie knew he couldn’t stand by and wait for the battle to reach his shores. That was when he hopped aboard an English cargo ship, bound for Britain and the war that awaited him.

When R.A.F. air-gunner Fred Cotton crash-lands in the desert, it’s up to his brother Harry to rescue him. Omre’s story is one of fraternity: both blood brothers and not, as Harry must team up with the stubborn and by the books Sergeant Wilcox on his mission to save Fred.

With cover and interior artwork by the late Gordon C. Livingstone, you know that you’re in for a treat. The thin line strokes, expert shading and detail that Livingstone is famed for shines through in this issue, most notably during a sandstorm, where Livingstone draws hundreds of wispy lines to show to the harsh winds. Livingstone’s cover, however, is full of strong, contrasting block colours, the blue of Harry’s uniform juxtaposed against the yellow and orange of the desert sky.

5049: Action and Adventure: The Blood of the Vikings

Another original tale from Shane Filer, when S.S. Hauptsturmfuhrer Josef Heiden finds Viking relics in France, he believes they will make a grand gift for the Fuhrer, but he has no idea what he has uncovered… Set mainly in the 8th-9th century, we follow Frankish orphan Thorvald, raised by the Vikings who raided his village as he re-joins his kin in their fight against the invading Danes.

With cover and interior art by Carlos Pino, the attention to detail in the armour and weaponry really adds to this issue, making it stand out as a new classic for readers, while his morose coloured cover shows Thorvald as every inch the Viking god he is perceived as.

A prolific Commando writer, Alan Hebden’s titular grenade is the centre of action in this issue, taking on a personality if its own, as the somewhat supernatural weapon favours some, while goes against others, with its own comical sense of poetic justice.

Jeff Bevan’s cover shows the eponymous grenade front and centre, a hero in its own right, certainly showing plenty of character throughout, while the muted greens and browns give a classic war look to this issue. Meanwhile, Dennis McLoughlin’s interior artwork is equally attentive, drawing most panels during rain showers in the Italian countryside, with both white and black lines to show the falling droplets.

I seem to recall Commando having quite a few supernatural-tinged stories over the years. Curses and hexed items definitely featured in at least 3 that I remember.

Definitely picking this one up on payday.