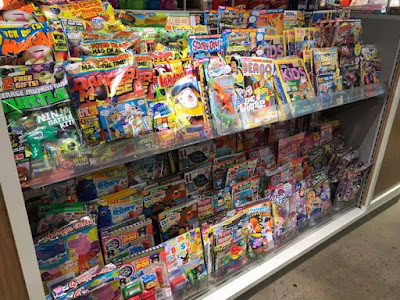 Following my post the other week about the state of UK comics in newsagents today, and how scruffy shelf displays could be detrimental to sales, Phil Boyce sent me a few photos of his local shop. These shots are from Easons in Belfast, and, as you can see, the presentation of the comics and magazines are neat and well organised, with logos (and sometimes full covers) clearly shown. 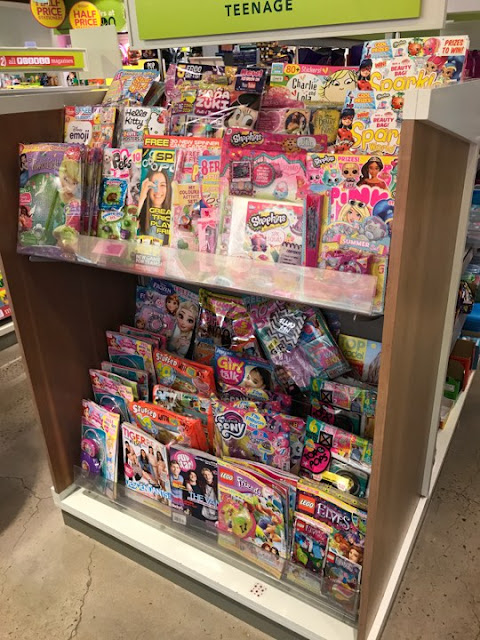 Phil tells me that he took these photos on a busy lunchtime, but that he's never seen the displays in an untidy state like those I showed from my local shops. It just goes to prove that with the right attitude from retailers, today's comics and bulky bagged magazines can look attractive and presentable with the right sort of shelving design and attention from staff. 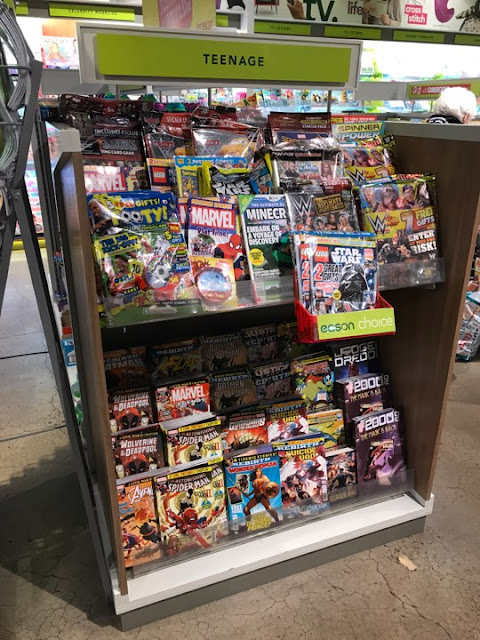 Good on Easons for making the effort to ensure their stock looks appealing and well presented. It's not rocket science that if you have stock, you want to sell it, not put customers off by making them rummage through tightly packed comics where they can barely see what's what. 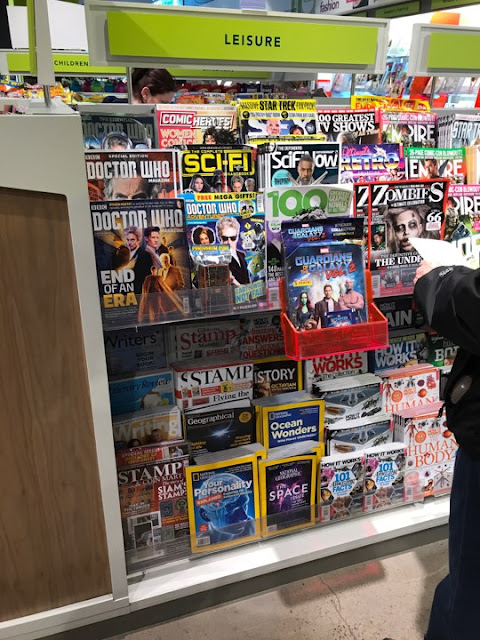 Thanks to Phil Boyce for letting me use the photos. If you don't already know, Phil runs the superb Oink! Blog which is always worth a visit:
http://the-oink-blog.blogspot.co.uk
Posted by Lew Stringer at 11:43

Now that's one fine looking rack. Of comics, that is.

I point out something.. while shops do pretty bad displays and everything, there is the amount of kids and parents that mess things up.. it never seamed a huge problem to me, but in the old days, you 'stuck' the gift onto the cover with the text under it saying "If missing, tell your newsagent".. of course these days that is a no-no.. damages the cover.. I never really noticed a big amount missing, bagging surely makes it easier to nick as the plastic is much weaker the then tape.. and the newsagents are more likely to tell you to stuff it if you try to say it's missing...

anyway.. one of the mess problems in the old days was how thick parents were.. Kids would see one that was of interest, pick it up for a quick flip.. now really, they could read it without buying which shops don't like, but more often I the parents don't want the kid to have it, they just pretty much throw it back. who cares where it goes ¬_¬; though now since kids can't take an interest in a new comic on the whole, so the parents don't throw it back cause... and with the packing, it makes it harder to put it back making it much more likely to get all screwed up and damaged..

erm.. where was I... ah right, while a lot of the shop staff are to blame for a complete mess, there is still the 'customer' problem.. we don't have the stupid American "The customer is always right" stuff that leads to major problems of toy swapping in the UK... we just have shops that stock sooo little ¬_¬ a lot of the areas are also badly designed so they just don't have the room for a decent layout, nor the sense for how it's possible to lay them out well in limited space.

Y'know, I don't think there really has been a large-ish study on displays.. maybe a lot of people can take photos at a number of local shops sometime over a month or so, and some ideas can be worked out? doubt it'll change anything though.. If evidence was proven that a great display can be cheap and sell ALOT of comics, shop managers will say "That's all well and good, but it won't work in our area"... retailers won't change, publishers won't change, so problems will keep happening..

As I've said in the past, although kids and parents do mess up the shelves sometimes it's the way that staff initially lay them out that's the big problem. Easons can get it right in Belfast. Shops in England should be able to do likewise.

Interestingly our local Chapters (part of the Indigo chain) uses an old fashioned spinner-rack for the American comics. I have seen the odd issue of Beano in the store and it is in with the various childrens' magazines. Those displays are usually neat and tidy.

I presume you mean the Panini and Titan comics are in the spinner rack? American comics haven't been available in UK newsagents for many years. Sorry if that comes across as pedantic. Just wanted to check.

No I mean the American books. I live in Canada so we get our comics from the US publishers and not the English ones, save for original books such as Beano.

Ah, sorry John. Good to hear the Beano is sold in Canada!

Thanks for spreading the love Lew! Belfast's Easons always looks like that. Manic Man, I know what you mean about customers messing it up (having worked in retail myself, in various capacities including a couple of big chain newsagents) but the staff should be making sure they're always tidy so other customers see everything. Easons is the only big newsagents in the city and is extremely busy all day every day, yet they manage perfectly as you can see. So there's really no excuse for it on the part of the shops across the water. I've also taken photos of my local Asda and a random popular newsagents in another town, both the same. Maybe it's a Northern Ireland thing haha!