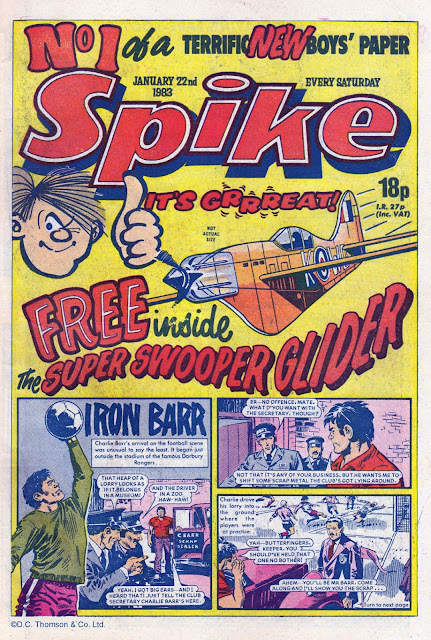 D.C. Thomson launched a new weekly comic 35 years ago, when Spike No.1 arrived in newsagents on Friday 14th January 1983. Although Thomsons had attempted a few tougher styled boys' comics with Warlord, Bullet and Crunch a few years earlier, this new comic was playing it comparatively safe and was more of a mixture of traditional comics like Victor and Buddy. That said, Spike did have its own style and felt more casual than its companion comics, helped considerably by the comic's mascot, Spike himself.

Under a nicely designed logo, the cover of issue 1 featured two proven methods to hook the reader; an exciting announcement that the comic contained a free gift, and the opening panels of the lead strip, Iron Barr (art by Mike White). The perceived wisdom at the time was that if a reader picked up a comic to read the cover strip, you were almost guaranteed a sale. Whether this worked in practice was debatable, as Spike only lasted for 67 weeks before merging into Champ.

Inside, the comic contained a nice variety of adventure strips, including sci-fi hero Starhawk (who had previously starred in Crunch) fighting the Powerbeast. (Art by Terry Patrick.) 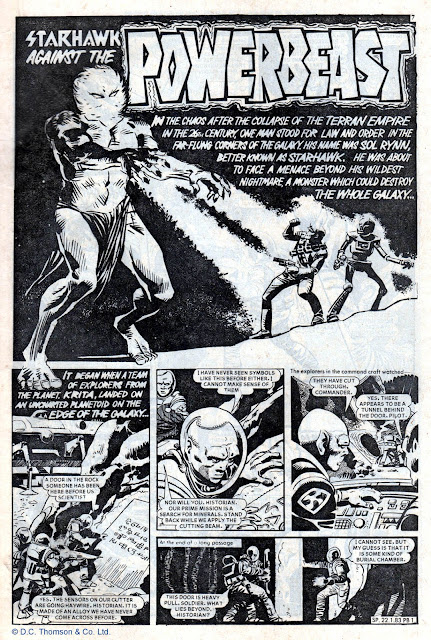 A D.C. Thomson boys' comic wouldn't be complete without a war story, and Spike gave us The Ghost in the Cockpit (art by Gordon Livingstone)... 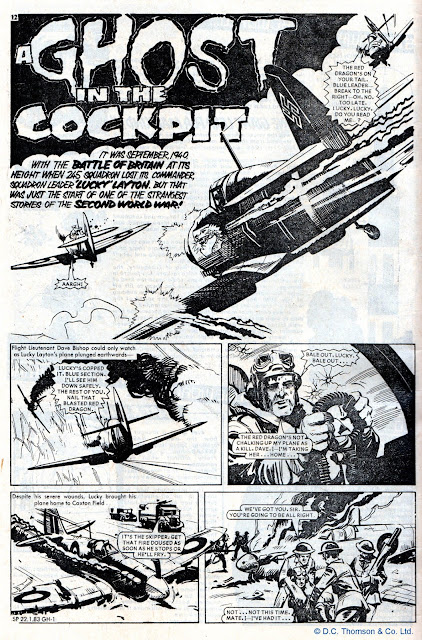 The main draw of Spike started in the centre pages. The Man in Black told the story of a mysterious, seemingly ageless athlete with extraordinary strength and stamina. The clues to the man's identity were revealed over the weeks that followed, eventually identifying him as William Wilson, the Wonder Athlete who had appeared in Thomson story paper The Wizard many years earlier, and in The Hornet in the 1960s. His revival in Spike acted as a sequel to those earlier stories but was also a retelling, using updated scripts as I recall. The artist of the strip was a Wilson too; Neville Wilson... 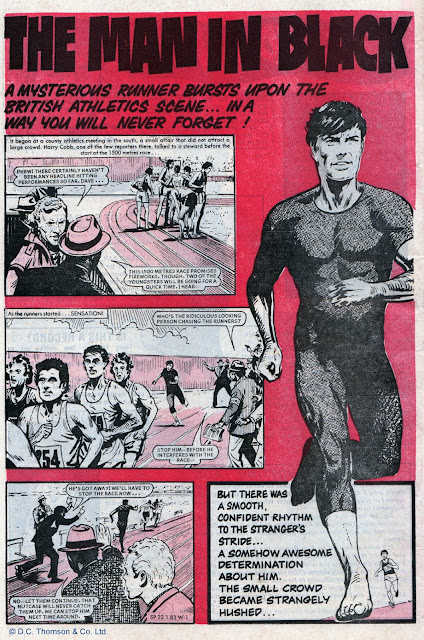 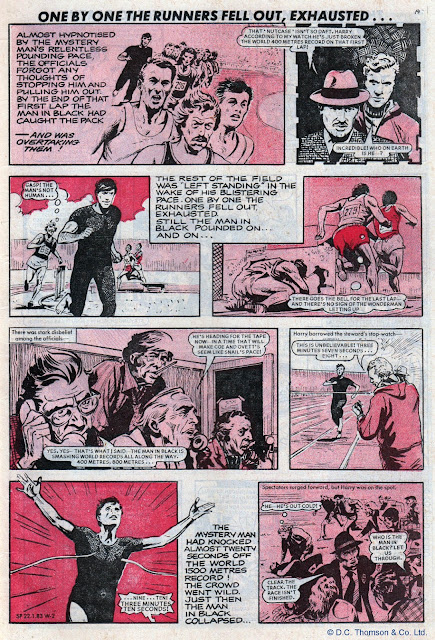 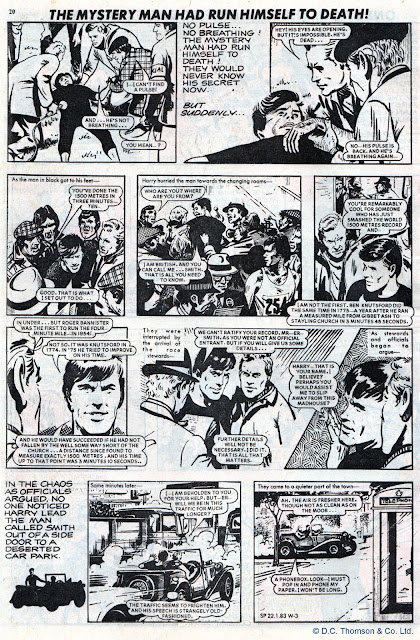 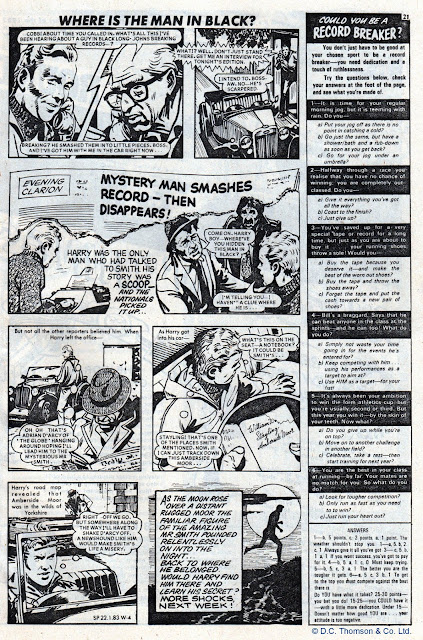 The Bleak Street Bunch was a traditional school strip, but with a contemporary setting. Art by Peter Foster... 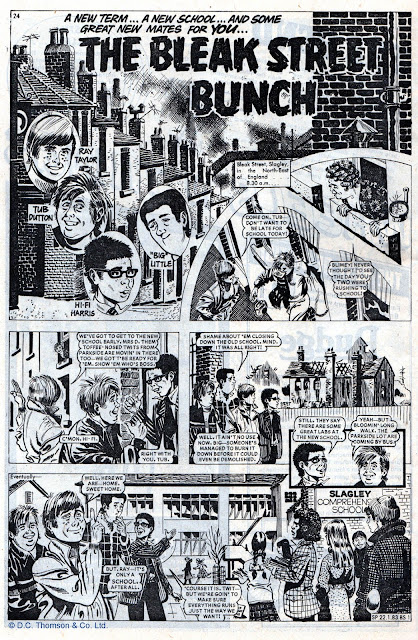 Ticker Tait, the Man with a Time Bomb in his Heart, was also drawn by the very-busy Neville Wilson, and was the spy thriller of the comic's line up... 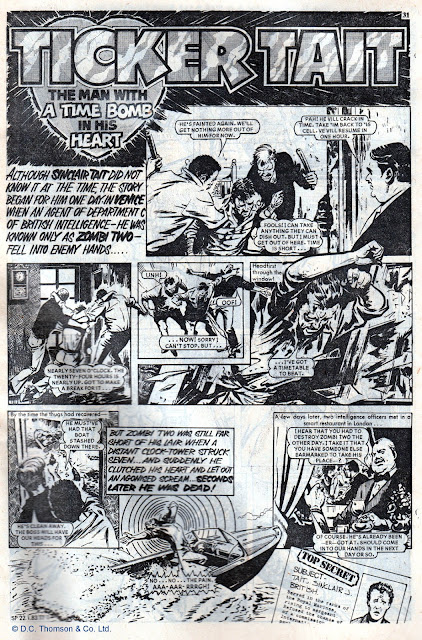 Spike also featured a few articles, a text story, plus a strip featuring Spike himself, drawn by Brian Walker... 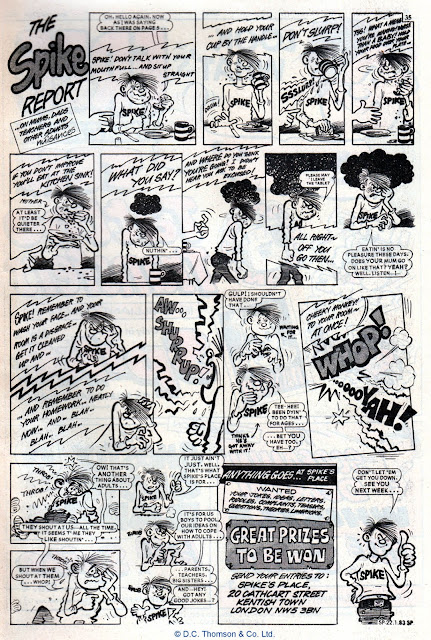 On the back page of the 36 page first issue was an ad for future issues and the free gifts to come! 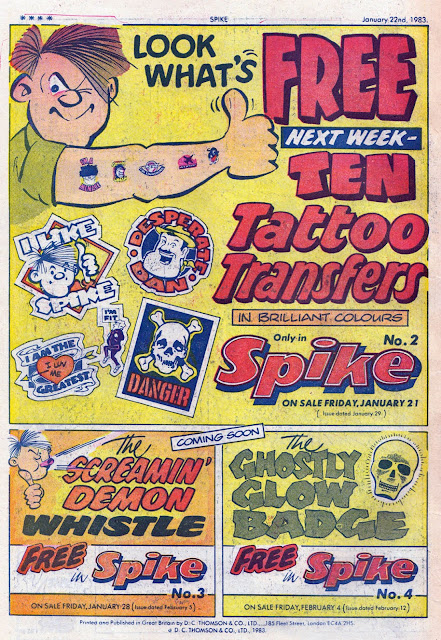 ...and if you wondered what the Ghostly Glow Badge in issue 4 looked like, here it is... 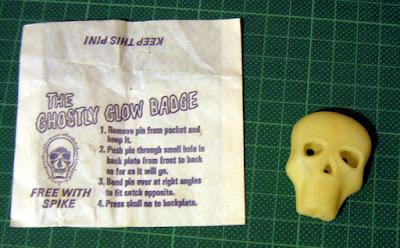 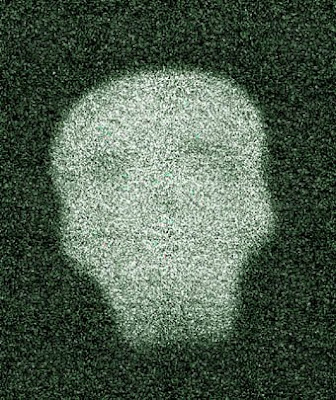 Spike was a very enjoyable, well produced comic but sadly it arrived at a time when traditional adventure comics were on their way out. Had it been launched in the 1960s it might have stood a better chance, but not in 1983 when it faced so much rivalry from comics based on toys and tv shows. The comics industry was changing and publishers soon found they had to adapt to survive.

All of the images in this post are my own scans and photographs, but I'm indebted to Jeremy Briggs at Down the Tubes for his excellent article on Spike which you'll find here: http://downthetubes.net/?page_id=25672  which enabled me to identify the artists.

One of my favourite DCT comics. I definitely preferred it to Champ.

But as you say, a comic born out of its time.

Great post. Spike was a lot of fun. Interesting point about the cover layout, I always liked the covers with one single image more. The 'strip' covers always seemed a bit boring.

I always prefered a comic strip on the cover, but it does depend on the story and quality of art. Unless it's an action scene, it can lead to some very bland covers.

As an older member of the audience I never saw the point of Spike, Champ and Buddy. If Hotspur could not keep going what chance had they when they offered more of the same?

Fair point, although it's easier to see in hindsight that the traditional adventure weekly was at its end. There were subtle differences to Hotspur though. Buddy had a younger style to it, Champ was heavily football-focused (which put me right off). Spike was the closest thing to Hotspur I guess, which may have accounted for its short life.

Seems to me it was outdated from the start. Even in the '70s I think "boys' paper" would have seemed a quaint turn of phrase to me. And compared with Action, Battle, 2000AD, even Countdown from ten years before, it looks terribly tame and old-fashioned. Disappointed not to see photos of the super swooper glider though.

The glider is still in its packet. Perhaps I'll add a photo later. Yeah, Thomsons and IPC always referred to adventure comics as papers. They argued that "comics" should literally only mean humour titles. It was the American influence that eventually had newer editors use comics for all strip publications.

I bought the first issue of Spike when it came out. Being 12 at the time I was presumably the target audience. I liked the free gift plane but I didn't like the comic at all and didn't progress to issue 2. The competition, 2000AD, easily won my pocket money when I discovered it a few months later.

Interesting to hear people's views on Spike. I was 23 at the time No.1 came out, so too old for its target audience but I enjoyed it. However, it's the younger readers whose opinion matters and clearly it didn't work for them.

In my younger days when I harboured hopes of becoming a cartoonist (but ended up drawing the dole, boom boom) I created a cartoon character of my own called Spike, blatantly stealing DCT’s Spike comic logo. It was essentially a Spike/Dennis the Menace rip-off, but from memory he looked more like Colin Whittock’s incarnation of The Champ. Wiping the nostalgic tears away, I can tell you that I never read this comic – I nicked the logo from other DCT titles in which it was advertised – and having read it recently in the British Library it did not exactly hold me rapt; bored me silly actually. I never read Battle Action Force either, but it utterly enthrals me to do so in adulthood (whatever that is); work that out.

My brother kept a stash of them for me to read which I did when I was 7 during the summer of 1986. I loved Ticker Tait, a cross between James Bond and Dirty Harry and didn't mind Iron Barr. I remember a story about a boxer as well. Also read copies of Buddy and Champ which had The Sinister World Of Mr Pendragon.