Cover preview: DOCTOR WHO MAGAZINE No.521 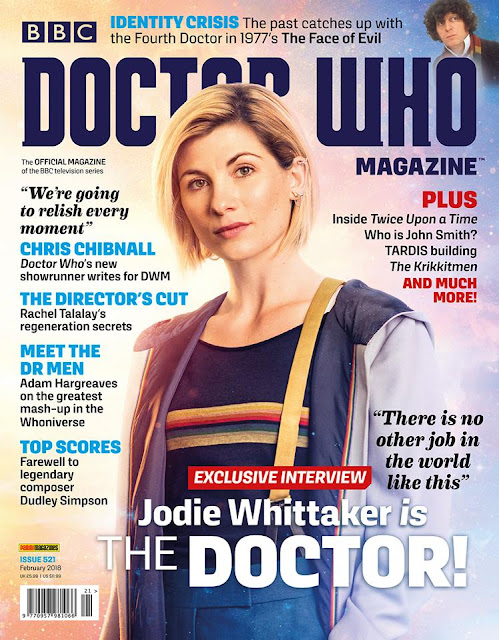 "Jodie Whittaker IS The Doctor" declares the cover to the new issue of Doctor Who Magazine, out this coming Thursday, with a brand new photograph of the actress in her costume for the role. It's long been a tradition of the mag to use an "...IS the Doctor" headline for the debut of a new actor in the part so it's good to see that still being the case for the first woman Doctor.

Reaction to this cover has been mixed on Facebook today, with some still unwilling to accept a woman in the role. I really do not see the problem at all. A shape-shifting alien changes from a man into a woman. So what? Each incarnation of the Doctor is different anyway; blonde, dark haired, grey-haired, tall, short, different personalities, different accents... if viewers can accept all that, why not a change of gender? Let's repeat; the character is an alien who changes form. Anything is possible. Also, after more than 50 years of male leads it gives a fresh angle to the show. It all depends on the quality of the scripts of course, but let's wait and see how it turns out. I think Jodie will win people over pretty quickly.

To be fair, the reaction has been mainly positive from what I've seen. Look at the videos on You Tube. Many fans are really enthused over this new direction, and I think it'll bring in a lot of new female viewers too.

Back to the magazine, my Daft Dimension strip isn't in this issue unfortunately; squeezed out by other features, but it'll be back next time. However, there is Part 3 of the 12th Doctor strip The Phantom Piper by Scott Gray, Martin Geraghty and David Roach, plus tons of exclusive interviews, previews, and features!

Email ThisBlogThis!Share to TwitterShare to FacebookShare to Pinterest
Labels: Doctor Who Magazine

I don't know about all of this 'equality for women' marlarkey, Lew.
Firstly, the moment she lays her hands on the tardis console, it throws a wobbler and she's shown the door. Women drivers, eh? Or maybe, the tardis is feeling competitive.
Secondly, if this new Doctor & the tardis do eventually hit it off, there'll be whole series of the two of them just gossiping.
It needs to be said, Lew. A woman's place on Doctor Who is running up & down cardboard corridors screaming. Or posing nude with Daleks. One or the other.
( tags)

I think the Internet is about to explode. :)

Subscriber copy comes on Wednesday (except during bank holiday weekends when it can be a day late, curse you bank holidays!!!).

That's my weekend filled, then. This publication has so much inside. If I read it in one sitting, it can take hours; if I read it over a few days, it takes a long time. So wordy. And that's good!

The likes of Star Trek Magazine and Star Wars Magazine have "shed some weight" in recent years, a shadow of their former selves, if you ask me (sorry, Titan). DWM gives me value for money each month. I'd also like to commend them for having one of their best years in 2016: despite the show not being on the air in 2016, they still managed to fill the publication with some great stuff.

Yes, I don't know how they manage to pack so much into 84 pages every four weeks. It's a great read, as you said.

Lew, I too don't understand all the fuss about a woman Doctor - from the very first regeneration in 1966 it must have occurred to the show's producers that a female Doctor was a possibility. It's a pity it took so long but I think a year from now we'll wonder what all the controversy was even about!

I don't think it would have been speculated on in the 1960s, Colin. TV shows were very male-centric back then (with The Avengers being an exception). I think you're right though that the fuss about a woman Doctor will die down after the series is shown. There's always some resistance to a new actor in the part but they usually win the audience over after a few episodes.