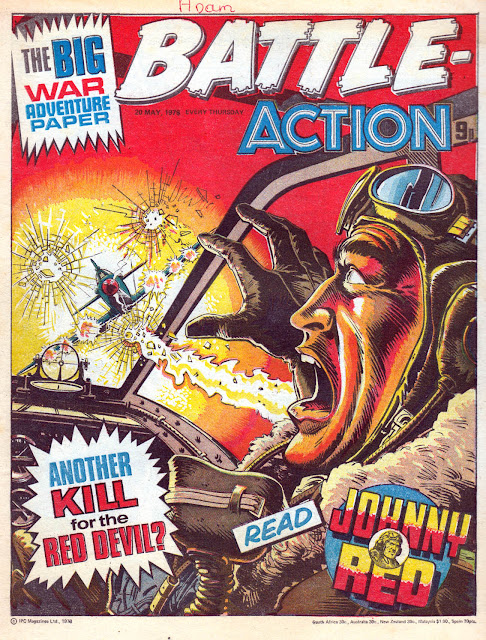 Last year I showed a selection of dynamic Battle Picture Weekly covers (see here) and, as there were so many great covers over the years, I thought I'd quickly scan a few more to show you today. These are selected from the years 1978 to 1980, by which time the comic's title had become Battle Action due to Action merging into it. Unlike most mergers, where the subsumed comic quickly sees its logo diminished, Battle made the Action title a fixture for a few years and actually incorporated it into a new masthead design as the name suited the comic so well.

Battle Action had some great covers full of tension and explosive drive. The one above is by Joe Colquhoun.

Carlos Ezquerra was a natural artist to depict gritty war scenes, as this cover demonstrates... 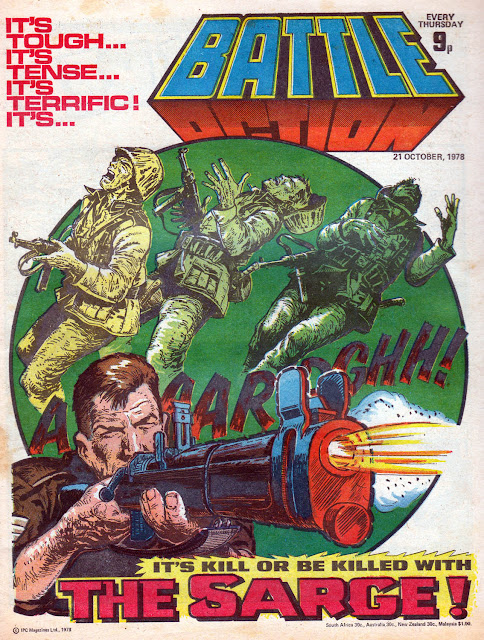 Issue 200 of Battle Action is significant in that it featured the first episode of Charley's War by Pat Mills and Joe Colquhoun. However, the cover of the issue was by Mike Western (with a vignette of Glory Rider by Geoff Campion.) 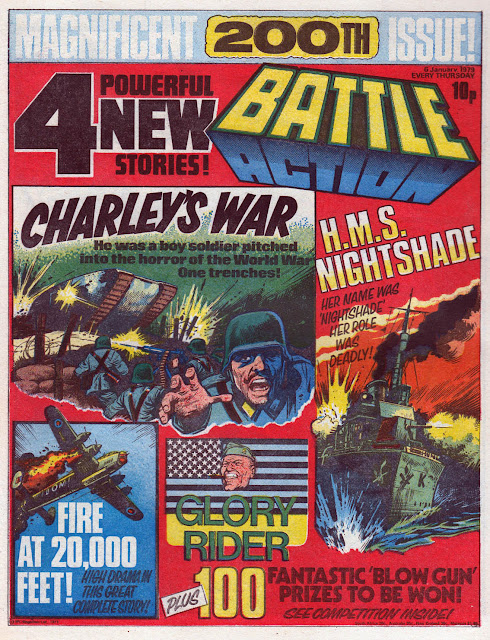 Battle Action experimented with its cover design more than any other IPC comic of the 1970s. I'm not sure this one using previews of interior strips worked, but it was an interesting attempt! 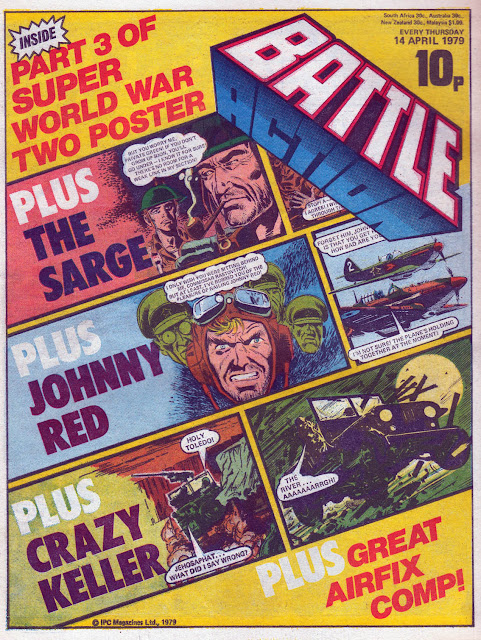 The best comic covers were the ones where text and illustration worked together for dynamic effect, as with this superb one drawn by John Cooper... 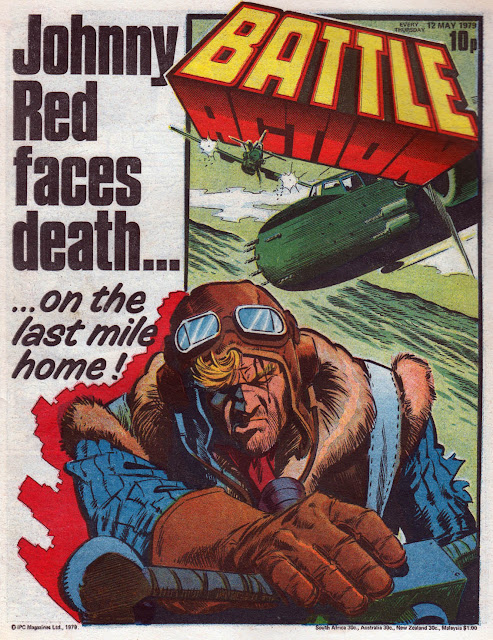 A good cover also grabs attention, such as this one by Cam Kennedy... 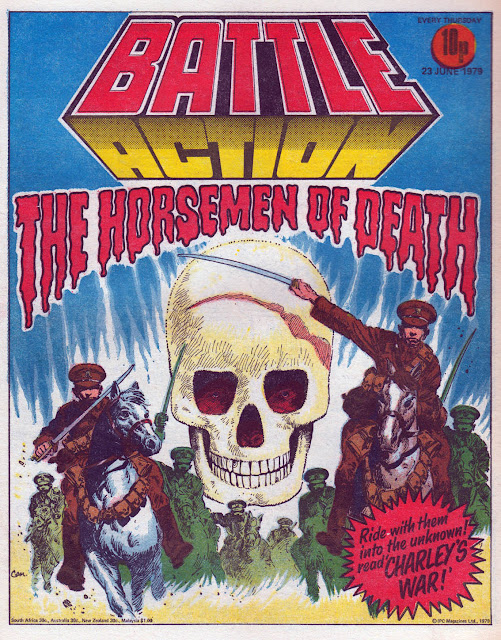 Prior to Battle Action, most comics kept the masthead in the same place every week, but this comic shook things up a bit. A logo in the centre of a cover? Certainly eye-catching, and that's what it's all about... 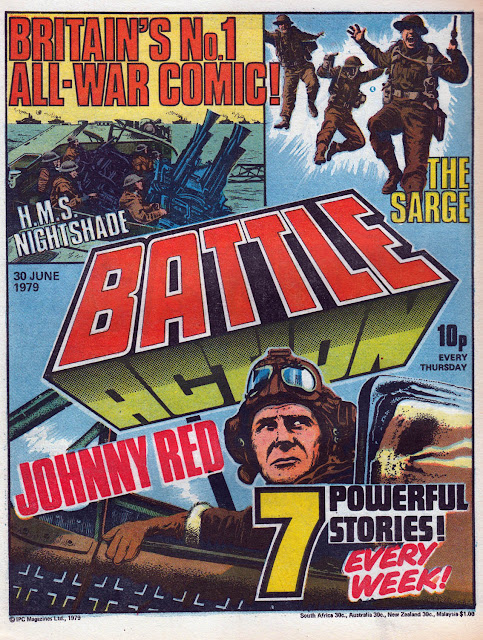 Another terrific cover by Joe Colquhoun... 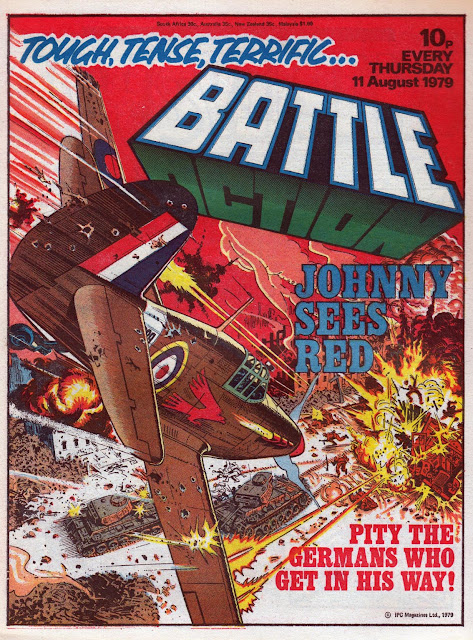 Mike Western was one of IPC's top artists, having illustrated covers for Valiant for most of its 14 year run. A versatile artist who could turn his hand to a slightly lighter style (eg: Buster's Leopard from Lime Street) or to darker, more dramatic material suited to Battle Action... 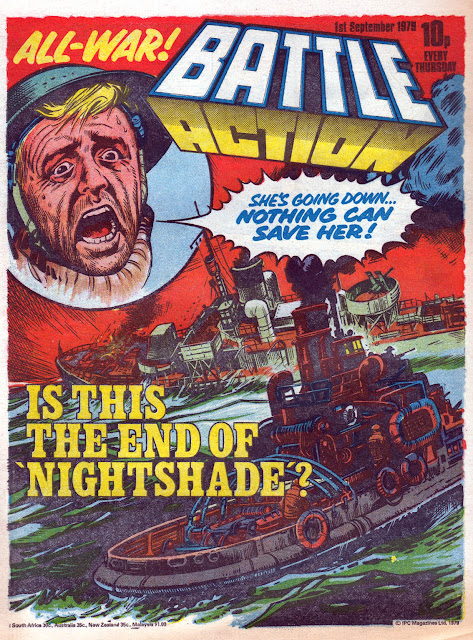 With all the fuss made about how violent Action was in 1976, people tend to forget that Battle was equally as grim at times. No publisher today would approve a cover for a kids' comic showing a knife at a throat, even if the subject was a Nazi. Art by Carlos Ezquerra... 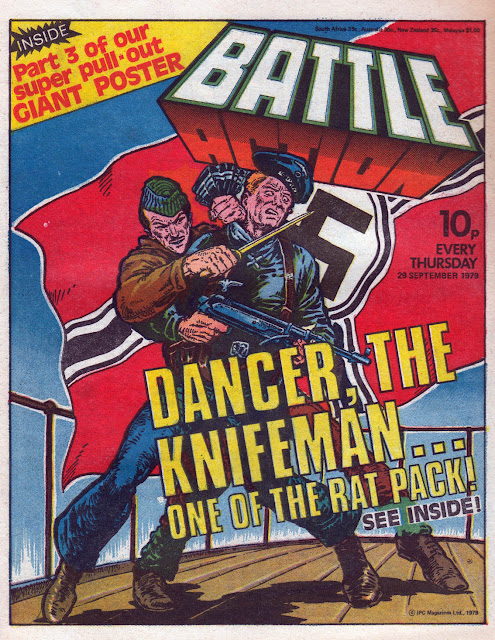 Another dramatic Mike Western scene, showing that even a dog could look deadly on the cover of this comic! 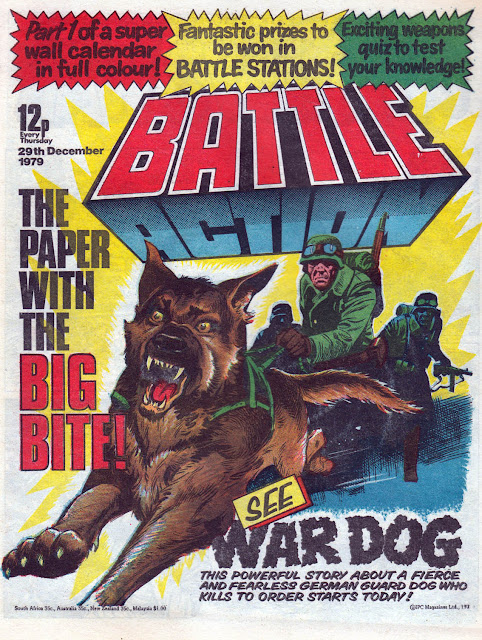 In 1980, Battle Action had a revamp, swiftly diminishing the Action part of the logo and bringing back the original Battle masthead. Its major change though was that strips now started on the cover (Charley's War and Johnny Red alternating week by week). Although this meant the comic suddenly looked very old school in its design, I must admit it was this issue that caught my eye and started me buying the comic. That said, I was 21, older than its target audience, so I've no idea what kids thought of this rather old fashioned looking cover revamp. I suspect many were not impressed, because this was the start of many changes for Battle that would eventually lead to its demise.

That said, how could anyone resist such a great illustration by joe Colquhoun? 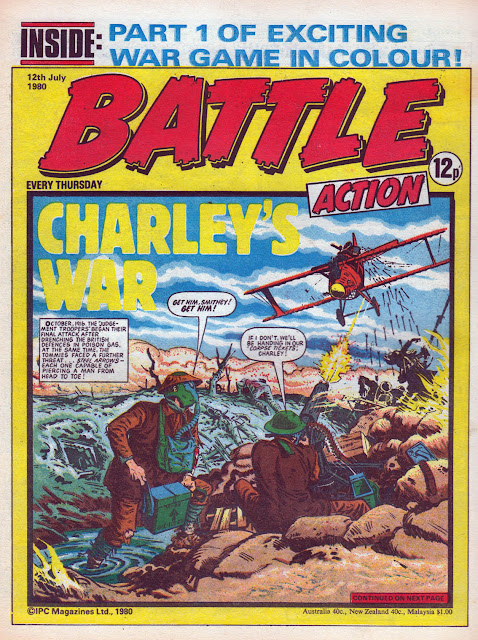 Battle Action and the cover images in this post are Copyright ©Rebellion Publishing Ltd.

Superb work here throughout. I always liked comics which changed their logo's look every week, not that many did. The short-lived Havoc (co-edited by John Freeman) changed its colour scheme to match the image on the cover every week and I always liked when Oink! would colour their usually pink logo a different colour. Maybe that's one of the reasons I really liked the last 9 fortnightlies (when it went newsprint) as the logo changed shape, size and position every issue, it added to the randomness. These Battle Action covers would definitely have caught my eye if I'd been about and reading comics at the time I have to say!

I regularly got Battle-Action after the two comics merged and personally thought that was when it was at its strongest. Also as a kid, I thought that 'Battle-Action' was such a cool name. So much better than the names that came before or after. I never understood why they changed it.

I suppose the change was down to that old reason; declining sales, Sid. Often it leads to fixing things that were not broken, such as the name of the comic. However, in this case it was later to accommodate a licensing deal by changing the name to BATTLE ACTION FORCE. That didn't end well, as Marvel got the licence to Action Force the next time it was renewed and Battle then came up with an imitation, becoming BATTLE WITH STORM FORCE. Yeah, they should have stuck with BATTLE ACTION!

Changing a UK comic's logo colour was mainly down to an American influence, Phil. (U.S. comics have always done it.) It could be argued (and used to be) that keeping a consistent colour and placement to the masthead helped the reader find the comic every week, which is why most UK comics stuck to that formula. Some kids didn't like changes to things like that. Even today, 2000AD usually has a white logo every week, and variations are not common. Even Panini UK has settled for using white logos on all of its comics, never changing their colour. The Phoenix is currently the only UK newsstand comic that shakes things up a lot, often changing the masthead's colour or tweaking it to suit what's happening on the cover.

I take it the hyphen in "Battle-Action" didn't last long. It's correct word wrapping but it looks awkward.

In retail I should think it's valuable for the cover to be visually distinct from the issue previously on sale, so you can see it's the new one - or maybe the trains ran on time in those days. Ringing changes in the logo would do that, particularly if the story starts on the cover. Also on that point - was there colour on inside pages?

The hyphen disappeared when the block-style logo replaced the old one.

The format of Battle was exactly the same as 2000AD in those days; full colour on front and back covers, and on the centre pages. The rest was in black and white. This was standard for IPC comics back then.

I forgot to mention this last time, but it's interesting to see (after our conversations about Toxic's publishers basically ignoring its 300th issue) the celebration of the 200th issue here, despite the fact the other issues don't mention the issue number! Was the issue number mentioned inside every week?

No, but they started putting the number on the cover a few weeks before issue 200, then dropped it again straight after the celebration. I think it was really down to the editors looking at 2000AD and realising that celebrating a milestone issue did the comic no harm. However, other editors never put the issue number on their comics (eg: Tiger, Scorcher, Buster).

Correction, sorry: in its last few years, Buster did have an issue number on, but it started afresh each year to appear like it was new, rather than include the issues dating back to 1960.

The 1980s Eagle comic was numbered.

Ah yes. Not for the first year or so though John.

Was there ever an official reason for this? I mean Beano and Dandy had numbers and I always liked my comics to have them, so I can't understand why it'd be a conscious decision to drop them after the first few issues. Certainly makes them a little bit quicker to sort! Or maybe I'm just getting on a bit.

I think it really came down to Fleetway and IPC not wanting new readers to be put off by what kids might perceive as "old" comics. Yep, it makes no sense, especially as having issue numbers never hampered D.C. Thomson one bit.