The Black Panther is coming to The Mighty World of Marvel 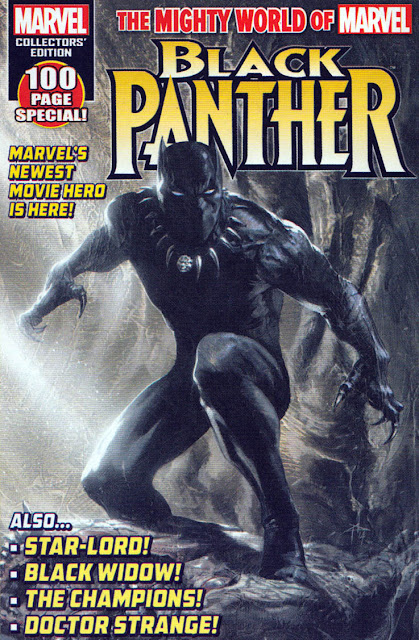 It's been a long time since the Black Panther starred in a British comic, but next month sees him get top billing in The Mighty World of Marvel, when Panini UK begin reprinting his adventures.

Issue 18 of the comic, out on February 8th, will contain part one of Who is The Black Panther? by Reginald Hudlin, John Romita Jr, and Klaus Janson, that first appeared in the Marvel Knights Black Panther No.1 in 2005. The Panther will also be headlined on the cover, taking over from Champions which is currently featured.  The reason for the change of course is because the Black Panther movie debuts next month, but it's still great to see one of Marvel's most interesting heroes back in newsagents.
As well as the Black Panther, The Mighty World of Marvel No.18 will also feature a Star-Lord solo story, continue the story arcs of the Black Widow and the Champions, and have a classic 1960s Doctor Strange tale by Stan Lee and Steve Ditko as a bonus.

Meanwhile, issue 17 of MWOM is currently on sale, featuring a cover by Neal Adams. 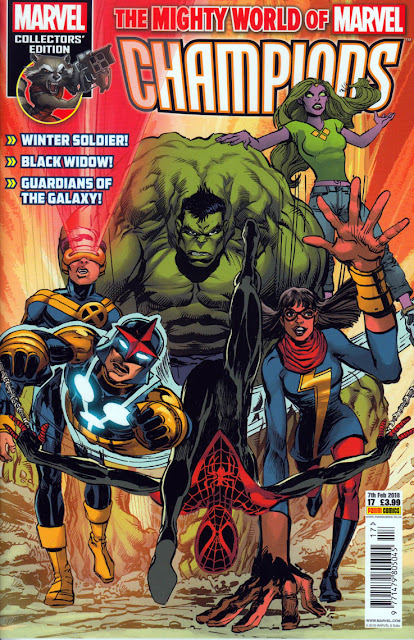 The first appearance of the Black Panther in a British comic would have been in the last few issues of Fantastic in 1968, which reprinted a crossover between the X-Men and The Avengers. As the X-Men reprints were ahead of some other Marvel reprints, any British readers who weren't buying American comics wouldn't have seen the Panther's debut in the Fantastic Four, or his initiation in The Avengers, so his sudden appearance as an Avenger in Fantastic must have puzzled a few people.
I'm certainly looking forward to the Black Panther movie. When I was a kid in the 1960s, I thought the Panther was the coolest comics character I'd seen. Looks like the film will convey that too. Here's the trailer...

I always liked Black Panther as well especially those early appearances in FF , such a cool costume. However, I will be picking this issue up for the Dr Strange 1960s reprint, can't wait. The Panther film looks amazing lets hope its a success. MWOM is a pretty good comic I've picked up quite a few issues and it has a nice mix of stories.

It'll be interesting to see which Dr.Strange story they reprint. As its a one-off it'll be one of the very early complete ones I guess, before the Dormammu serial.

BP was one-time co-star of the shortlived weekly MARVEL SUPER ADVENTURE alongside Daredevil.

It didn't last long... And he didn't survive the merger with CAPTAIN AMERICA weekly.

Yes, he's been in a couple of Marvel UK weeklies. I can't remember the first one he was in now, but one of them serialised the Panther's Rage story. That was many years ago of course.

Lew, Panther's Rage was in Planet Of The Apes.

Thanks Colin. Maybe not the most appropriate place for it but I guess they had to fill it out with something.

I'm surprised MWOM isn't launching a new volume for this as they do like to do that around a big movie. Looking at the back of the latest issue of Avengers Universe listing the Secret Empire issues it looks like it will be soon as the MWOM chapters are in a new volume format but not starting next month it seems

Yes, they'll all start new volumes soon, but it's seems a bit random this time. Avengers Universe started a new No.1 hallway through a story, and I suspect the other comics might too. I hope not though, as that's one of the drawbacks that Titan have with their comics.

The current MWOM logo is really annoying me. Surely the title of the comic should be the largest thing on the cover?

You saw this in the shop and you'd think the comic was called Black Panther! Which I rather suspect is the whole point along with Panini's continual rotation of strips to fish for more people from whichever film is current.

Marvel have a long tradition of having a stripped logo like that for some comics, in order to grab people's attention with the character name. Look up 1960s comics such as Tales of Suspense, Tales to Astonish, Strange Tales, and '70s comic Marvel Premiere to see what I mean. Even MWOM did it in the 1970s, with it highlighting the Hulk logo. When Panini revived MWOM years ago they did it too, highlighting Hulk and Daredevil as the main parts of the logo.

Personally I think Marvel Legends should do it too, highlighting Iron Man, Thor, and Captain America in rotation, but the big MARVEL logo works too.