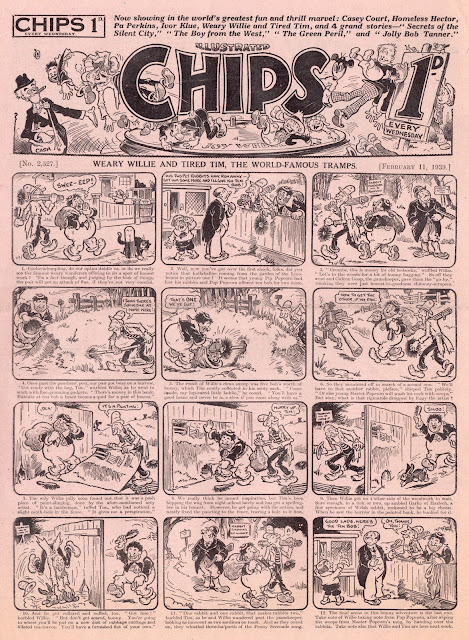 I'm a bit busy at present but I didn't want the week to pass by without posting something from the history of comics, so here's a quick scan of the cover to Chips No.2527, dated February 11th 1939 (published on Wednesday Feb.8th). It featured those long-running cover stars Weary Willie and Tired Tim and was drawn by Percy Cocking.

Comics only had 8 pages back then, so they really packed a lot in for the reader's money. A very busy cover with some smashing cartoon work. And yes, it really was printed on pink paper. Definitely a cheap and cheerful comic!

While I'm at it, I'll give a plug for my other blog. (Hey, I promote the work of others often enough so why not plug my own?) Drop by there sometime and have a look:
http://lewstringercomics.blogspot.co.uk

Is this where they got the idea to use in "Road Runner" cartoons, of the aperture painted on a wall??

I've just noticed the magazine title with all the cast riding (or not) on the "joy wheel", was that a permanent attraction? According to web pages, that's a curious fairground ride - the term "short lived" was used - which is a large flat wheel mechanically turned at ever-increasing speed until the last of the riders falls off. It sounds jolly dangerous.

Yep, the joy wheel (or a variant thereof) was popular in fairgrounds for decades. I remember a similar thing, but a giant spinning barrel, but I never went on it.

The aperture painted on a wall dates back to early cinema I believe. I'm sure there's something like that in a silent comedy I've seen.

Forgot to answer your other question. Yes, the masthead of Chips (and similar comics such as Comic Cuts, Jolly, Funny Wonder etc) always carried a busy scene in those days, showing the comic's characters having fun. They'd usually run the same image every week, then change it for another after a while. Celebratory issues such as Christmas or Whitsun had their own illustrated mastheads.

love the mast heads in this era..
also clever story..

My father was a child of the 1930s and to this day he still describes tired people as 'Weary Willie and Tired Tim" - and until I saw the characters featured in your blog (in your earlier post on the origin of these characters), I'd had no idea where this saying came from! Great stuff.

Thanks for answer. The "joy wheel" by its name is appropriate for inclusion in this prominent position on the magazine.