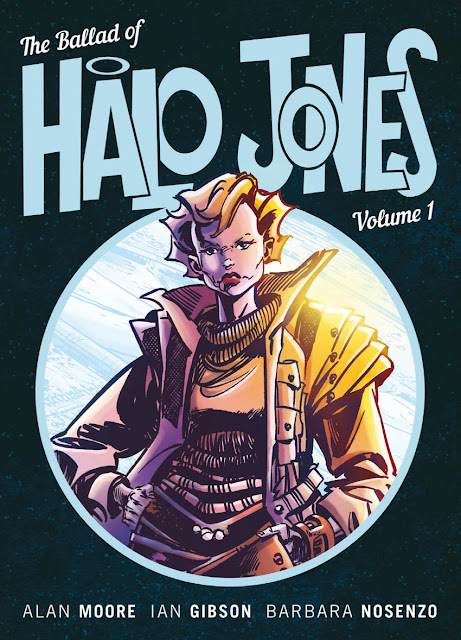 The Ballad of Halo Jones is to be collected in book form again, but this time it'll be remastered in full colour! Here's the press release from Rebellion...

Coloured by breakout Italian newcomer Barbara Nosenzo and published in three volumes this year, Halo Jones is an ordinary unemployed teenager living on a crowded and oppressive housing project floating off the coast of Manhattan. Desperate to leave her humdrum life, she escapes as a stewardess aboard a luxury space-liner but a chance encounter has ramifications far beyond Earth. And after she enlists in a dehumanizing interstellar war she becomes embroiled in an unlikely and complicated romance, her humanity tested and strained as she matures.

The first progressive feminist character in British comics, Halo Jones is a mature masterpiece of characterisation and world-building, and heralded the extraordinary talent of the writer who went on to pen Watchmen and V For Vendetta. Ian Gibson’s superlative art is complemented and energized by Nesenzo’s pitch-perfect new colours in an ideal edition for those yet to dive into Halo’s incredible but utterly relatable world.
Volume 1 on sale 17th May 2018, £9.99 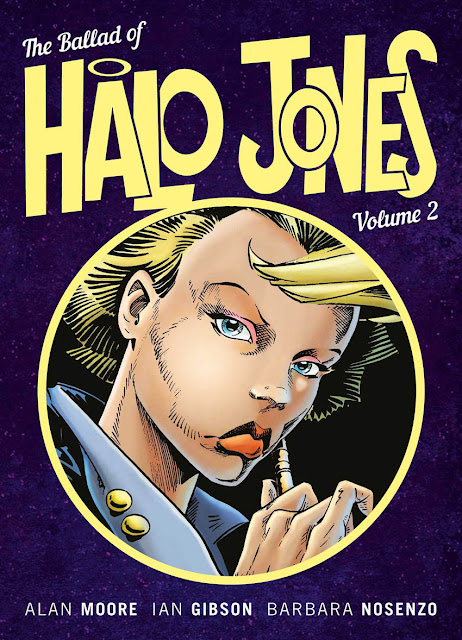 One of the those epic, unfinished strips whose incomplete status causes the most regret (another would be the contemporaneous manga 'Appleseed').

I haven't heard of Appleseed but, yes, I agree regarding Halo Jones.

Appleseed is okay, but some of his other works are much better..

I would kinda debate 'The first progressive feminist character in British comics' line.. but then, they are kinda buzz words these days.. hell, for the last 10 years, 'feminist' doesn't even mean equal rights but female domination. Not that I got a problem with that, i've worked under females for most of my life in various ways, but it reminds me of a good Karl Marx quote.. When talking to Jules Guesde and Paul Lafargue in a letter, both claimed to be big time marxists. After trading some words with them, he reported to Fredirch Engels, "It is certain that if they are Marxists, then i myself am not a Marxists".

still, It's always good to see British comics getting some respect and collections.. now if only they could do more about it with OLDER british comics.. We have almost had the longest paper comic history in the world (beating america by quite a few years). and yet soo little respect for it..

Feminist does not mean male domination. Where did you get that idea from?

If this is going to be the colourized "Quality" Comics reprints from the 1990s, I don't want to know. It's about as much use to me as the similar Eagle Comics' Nemesis reprints Rebellion erroneously thought it was a good idea to bring out a couple of years ago. I'll get off my soapbox now.

It's not. As I said, it's a new colour version.

I've seen a fair few complaints bemoaning the release of a coloured version. Am unsure whether those complaining realise that they don't have to buy it, nor will Rebellion send the art droids 'round to attack their existing B&W copies with felt tips.

Very true, Kal. The attitude of "I don't like it so it shouldn't exist" seems to be the automatic response of some people. Not just in comics fandom but in television, sport, or life in general. Tedious.

That's the point.. I probebly worded it wrong but Feminist doesn't mean male domination. But going back quite some time to some riots in the 60s, there is what is called the 'radical' groups to which "All men are rapists" view.. rape of men by women is growing. But doesn't get as reconised. It's like, due to some.. issues, I can 'play' a card if i want a job interview which says in order to be equal, i can get a guareented interview.. so that gives me BETTER treatment then others.. that's not equal. that's what is refered to as 'positive discrimation'.. but there is nothing postivie about any form of discrimation. Alot of jobs still have a 'female quoter' which says they need X number of women for every X number of men. reguardless of their skill.

I'm not that keen on him as an actor (well, it's more the case of i don't think much of what i've seen in him in the last XX years.. he was good in the electic company though) but there is an actor called Morgan Freeman. He is a black actor. He doesn't like Black history month in america and wants it removed. basically, because its racist. It's not lumping everyone together as equal but as special treament. to quote some bits he said on the subject, "Stop talking about it. I'm going to stop calling you a white man, and i'm going to ask you to stop calling me a black man". People are Equal. Well, no, that's not quite true. Women can give birth, I can't. So we aren't equal there because that's a physical difference. Generically, men are build with a stronger frame so better at heavy lifting, but excerise counts too. I can name tons of women friends who excerise more then me and can carry more weight. But i can also name some men who excerise alot and can carry more then them. But if you want heavy lifting, it's based on person more then gender.

but if you look around, you will see tons of groups that don't think equal is 'good enough'... it's a shame. It's like them idiots that think two friends of the same gender must be gay.. "Oh look, Batman and robin are good friends.. and they are both male.. they must be gay!", "oh look, peppermint Patty and Marcia are good friends, and they are both female.. they must be gay!"... some people even think your voice is what decides if you are gay or not ¬_¬ sigh..

I don't see how Black History Month is racist. It's allowing people to focus on significant achievements by black people that might otherwise be overshadowed.

As for equality, it's about being *treated* as equals. Nothing to do with how strong someone is for a particular job etc. It's about respect.

I favour the late Rebecca West's oblique epigram on feminism; the one that ends with the word "doormat". I think if I need to describe feminism to a politically unaware lady, I'll tell her to shut up; if she disagrees, it's that.

But how much of it is demonstrated in "Halo Jones", I'm not sure - although in fact I didn't read a lot of it. I found some negative and positive comments, details I remembered and didn't, here:
https://www.tor.com/2012/04/09/the-great-alan-moore-reread-the-ballad-of-halo-jones/
(including readers' comments below the article)

I also wasn't clear on how it amounted to a "ballad", but I think my idea of what a ballad is was partly the problem; I was expecting a song about a famous hero, but a perfectly valid ballad can be just a story - a song - where in due course someone of no great importance dies pointlessly and probably violently. Or something unfortunate like that.

This quote? "I myself have never been able to find out precisely what feminism is: I only know that people call me a feminist whenever I express sentiments that differentiate me from a doormat." - Rebecca West.

Seems pretty clear to me.