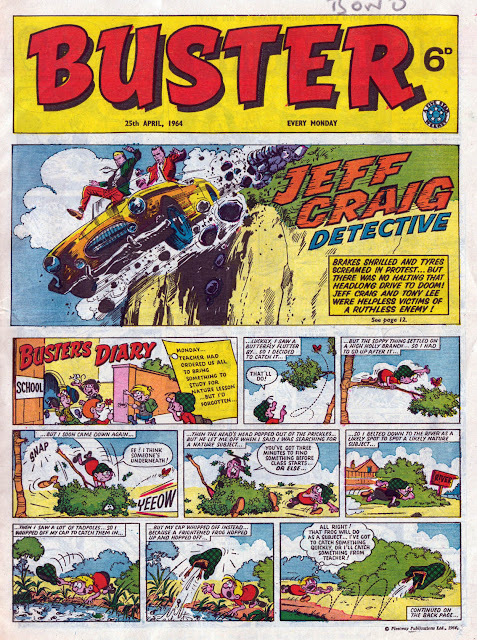 Before I embark on this year's selection of classic Christmas comics I have a few more non-festive items to show you. First off, here's a few pages from Buster dated 25th April 1964, back when it was still a large tabloid size comic.

As the years passed, a myth surrounded the Buster character that he was never seen without his cap. That wasn't always the case, as this 1964 issue proves. Buster takes off his cap and he's blonde! Artwork by Angel Nadal. 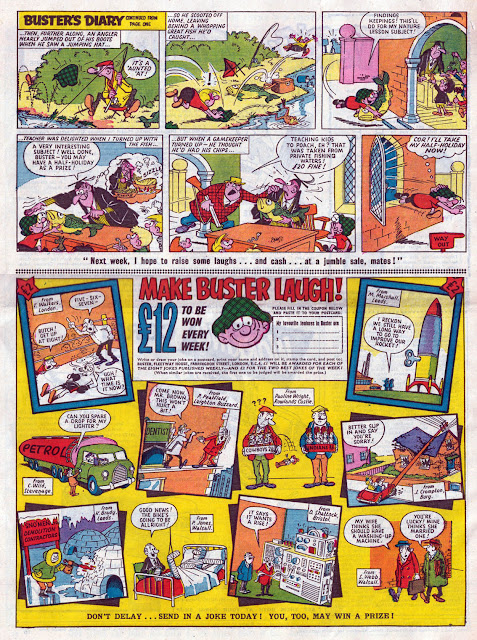 Let's take a quick look at a few strips from inside the comic. Back then, Buster had an even split of humour and adventure strips providing a nice balance to the contents. The adventure strips were not light fare either, but rather spooky, atmospheric tales. One of them being Maxwell Hawke, drawn by Eric Bradbury... Another adventure strip was advertised to be starting in the following issue; The Shrinker's Revenge. This ad is illustrated by Mike Western... 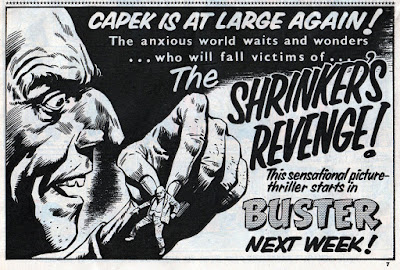 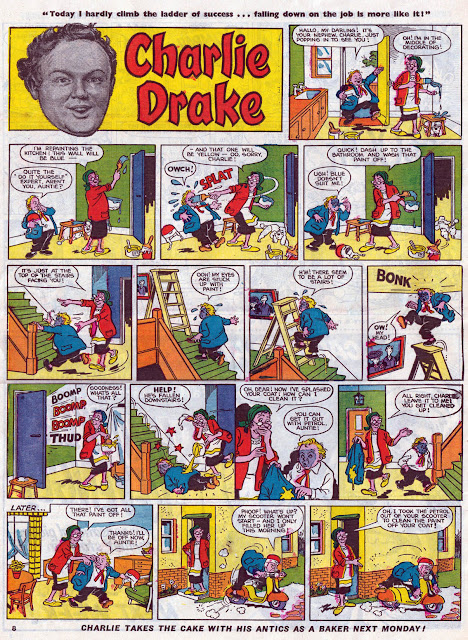 Another supernatural strip on pages 10 and 11, nicely illustrated by Tom Kerr; Thunder Boult, "an amazing illusionist turned secret agent". No relation to the British superhero Thunderbolt who came to Buster a short time later. 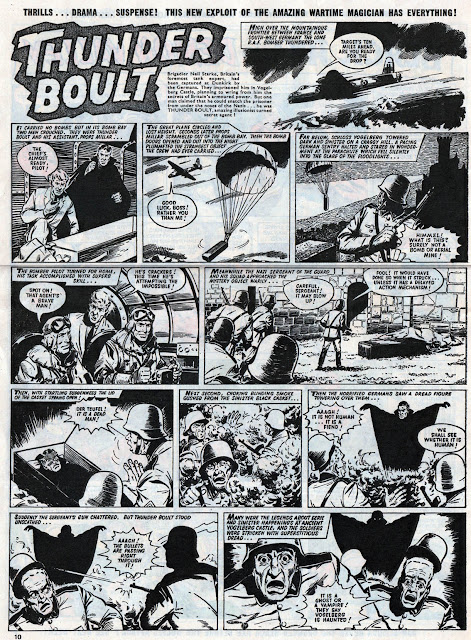 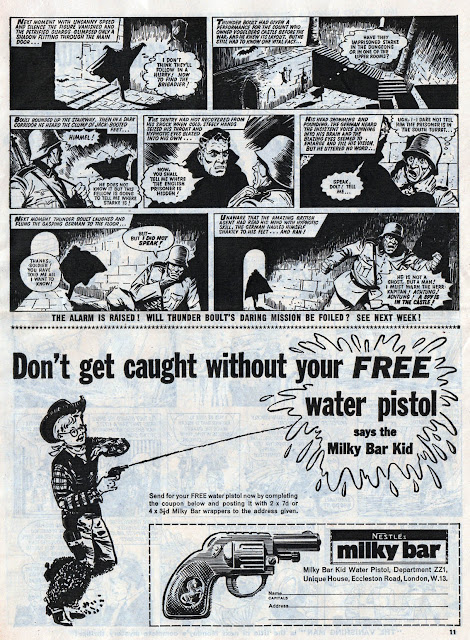 Nice look back. Pity some of these stories haven't been reprinted. The Maxwell Hawke strip looks interesting. Was there a previous Shrinker story? I have seen references to this story elsewhere but not to an earlier story. And thank you again for increasing this Canuck's knowledge of British comics.

The Buster comic was actually a beautiful big comic.The tabloid size certainly allowed the artword some space to breathe.today's readers of comics would be quite surprised just how big these pages were..I have a good run of Busters between 1960 and 1963 which I bound between cloth covered hard covers. They really do look excellent. That's really the way these old comics should be reprinted , if at all...but preferably on better quality paper.

Yes, it was the same size as today's newspapers, giving Buster a chance to compete with the similar-sized Topper and Beezer I guess. Tabloid sized comics were dying out then so it's interesting that Fleetway chose to go with that, even though Buster only lasted in that size for its first six years.

I doubt they'll ever be reprinted with the way things stand at the moment.

I wasn't aware that Buster was a tabloid sized comic at this time. I think I started reading Buster around late 1965 (at 5 or 6 years old) - the art must have looked amazing in that size with these artsists working on it ( something for me to look at getting now is a tabloid issue of the Buster). I was a big fan of the "Shrinker" tales as a kid and the advert here took me right back to how IPC/Fleetway used to advertise new strips, as a kid I always fell for them as they looks so interesting/ funny and or exciting (this one here looks particualrly inviting). This is also the first time I have heard of or seen the Tom Kerr "Thunder Boult" strip - An amazing article Lew thanks for showing this, I miss the Buster especially with its mix of humour and adventure strips.

I've shown some of the early issues here before, Paul. Perhaps you've forgotten. There are some issues for sale on eBay unless they've all been snapped up.

I must have missed these Lew or (more likely at my age) forgotten , but I will have a search for these and no doubt remember.

I suppose 36 years later when they were working on the final issue, they figured nobody would remember Buster's hair ever being shown before - the target audience certainly won't have.

Charlie Drake must've been popular - he's originally from Radio Fun, which merged with Buster in 1961, and would've already been in Buster for three years at this point.

Even the editors wouldn't have remembered one strip from 35 years previously, and if they had they wouldn't think it important. (It was a different editor by the 1990s anyway.) This wasn't the only time Buster lost his cap. Another example is when it came off in one of fill-ins drawn by Leo Baxendale in 1967, and Buster had a shaven head in that episode.

Yes, Charlie Drake was very popular. I wasn't a huge fan, but he made me laugh sometimes when I was a kid.

Blonde? I always thought he was ginger under the cap. Another great Eric Bradbury strip, always felt that he's been under rated.

"Lew, I was just looking around on ebay and found this link. What's your view on people selling old comics like this?
Steve"

I hope you'll understand why I didn't post your full comment, Steve, as it linked to someone selling pirated material. As you can guess, I don't approve. I wouldn't want anyone selling pirated versions of my work so I can't condone them selling anyone else's.

Publishers are ok with people (such as myself) posting selected sample pages on our blogs, (and even send me some to use) but they don't like people posting entire comics, or entire serials, and certainly not for profit.

I know people think there's no difference between selling comics on disc or selling back issues, but the big difference is it's not illegal to sell an old comic. It IS illegal to publish and distribute a comic you don't have the copyright of.

Completely understand why you didn't show my whole post. I was very surprised to see the link in the first place, seems ebay takes a very loose approach to such items. Maybe if enough people complained they'd think about addressing the problem.

Yes, it's up to the publishers to take action and complain to eBay though. Some have, but others don't bother. eBay won't respond unless it's the copyright owner filing the complaint.

The problem is in knowing if something is in copyright or not. Not sure about elsewhere but in the US copyright notice has to be phrased a certain way and be in a certain spot. As well if there is no copyright notice then the work automatically falls into Public Domain. Finally it has to be renewed at a certain time. That means a lot of smaller publishers who simply ceased operation probably never had their material renewed thus allowing it to fall into public domain. One can't really expect a company like eBay to know what is and isn't in public domain if it doesn't come from a major publisher who is still active.

That doesn't sound right to me, John. Are you sure you're not confusing it with a Trade Mark? The 'TM' has to be in a certain place I believe.

UK copyright law:
"The 1911 Act provides that an individual's work is automatically under copyright, by operation of law, as soon as it leaves his/her mind and is embodied in some physical form: be it a novel, a painting, a musical work written in manuscript, or an architectural schematic."

"In 1995 the period of copyright was extended to the life of the author plus 70 years (as described above) for works which were, at that time, still within copyright anywhere within the European Economic Area. One effect of this was to impose a copyright extension of twenty years on all works that were made or published after 1911 by any person who had died after 1945, as the previous copyright period (of lifetime plus 50 years) had not yet expired in the UK for someone who had died in 1945 or later."

US law apparently requires specific wording and for it to be placed in a specific spot. As well from what I have read elsewhere if a work is before 1969 renewal has to be done manually but if after it is done automatically. A lot of early stuff is in public domain because the publisher ceased to exist and no one renewed the copyright. In other cases (like Charlton from my understanding) Charlton didn't follow the correct procedures.

US copyright law is here:
https://www.copyright.gov/title17/

Although of course the strips we were talking about are British, so subject to UK copyright law. Those pirate discs are illegal.

I think when a comic goes out of print it becomes public domain.

Simon in the US copyright expires after certain amount of time unless it is renewed which is why some comic material is in the pubic domain and other stuff not. One oddity, Paramount renewed the copyrght on some issues of DC'c Dean Martin & Jerry Lewis comic but not all of them.