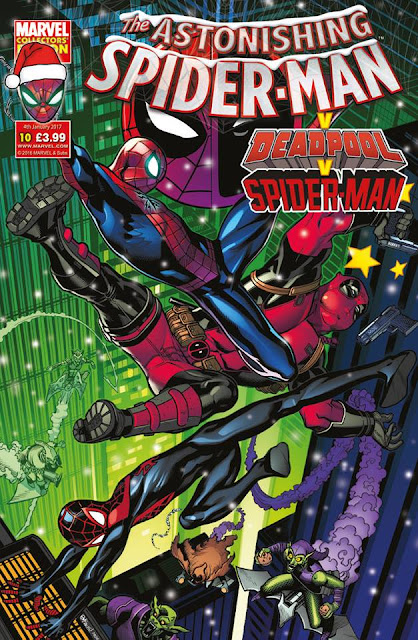 Another pause in our look back at vintage Christmas comics to show you this cover of the latest edition of The Astonishing Spider-Man from Panini UK. Editor Brady Webb always likes to make his comics look more festive at this time of year, even though the reprint contents might not reflect the season. By adding a Santa hat to the corner icon, snow on the logo, and a few snowflakes to the action, it's job done! A nice touch.

Here's the info on this issue...

https://www.facebook.com/MarvelCollectorsEditions/
Posted by Lew Stringer at 13:02

My local WH Smith's closed in 2014 but Tesco has recently started selling Panini Marvel comics - but for some reason they only sell Astonishing Spider-Man, Avengers Universe and Wolverine & Deadpool...beggars can't be choosers I suppose.

It's a similar situation in my corner shop, that has MWOM, Avengers Universe, Incredible Hulks, and Astonishing Spider-Man, but not the rest. I've no idea why this is the case. Fortunately we do still have a Smiths that stocks them all.

I've still kept with Spider-man, but am still not really enjoying the Tony Stark/Bruce Wayne/Batman version. Where there was once ingenuity, to get himself out of trouble, now Spidey just whips out a bit of tech. Having said that, I still keep coming back for more. However, I also picked up the Mighty World of Marvel when it re-started; Doctor Strange is excellent. I had never read that title before; what have I been missing?

I live behind a hospital with a Smiths in the foyer; all the comics I want within five minutes walk from my front door!

I know what you mean about Spidey and his tech, Cole, although I suspect that it's all building up to a mighty fall for Peter Parker again. Plus there are problems coming up that even his technology can't solve. I'll say no more for fear of spoilers for those who haven't read the U.S. editions.