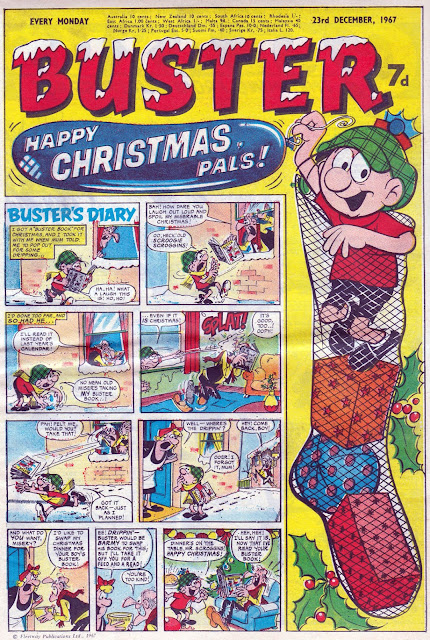 By 1967, Buster had reduced its size from its original tabloid format down to 32mm x 23mm (the same size as Smash!, Pow! and Wham! were at that point) but this was still larger than most comics. With 36 pages for 7d it was good value, even though only the front cover was in colour. Speaking of which, Angel Nadal provided the cover strip shown here, although I'm not sure if it was him or a staff artist who did the larger picture.

Inside, we were treated to some nice material by Leo Baxendale, who had quit the Odhams comics a year earlier to freelance for the better-paying Fleetway titles. Here's The Cave Kids, avoiding the anomaly of Christmas in prehistoric times but still cleverly managing to do a seasonal story involving a sledge and snow... 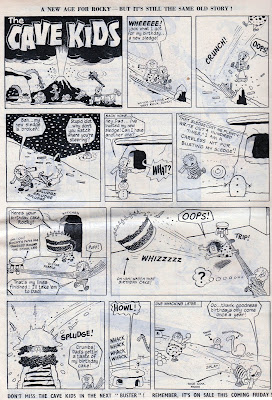 A sledge also features in the Charlie Peace story, drawn by Jack Pamby. It seems bizarre now that one of Buster's longest-running strips was based on a real-life murderer, although for the purposes of the strip, Charlie is just a loveable rogue and bumbling thief. All the same, it was a very strange inclusion in a children's comic... 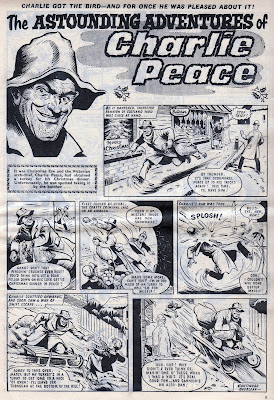 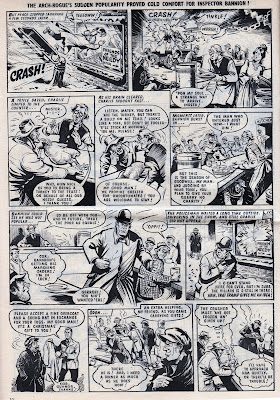 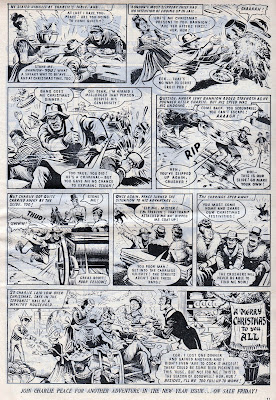 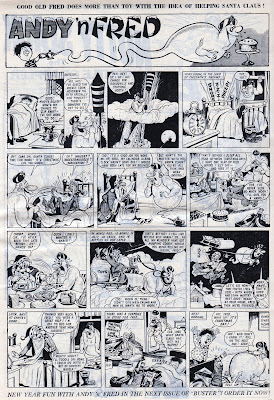 Running across the centre-spread was The Pirates, another strip by Leo Baxendale. Nice work, and a pity it wasn't in full colour. 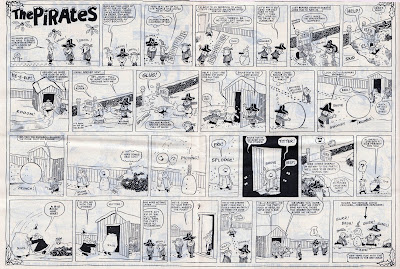 Attempts at doing British superheroes didn't always meet with success. Thunderbolt the Avenger isn't as well remembered as Billy the Cat or Marvelman, but he had a run of just over two years in Buster... 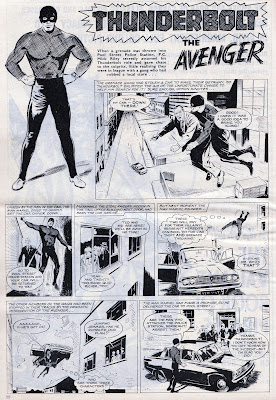 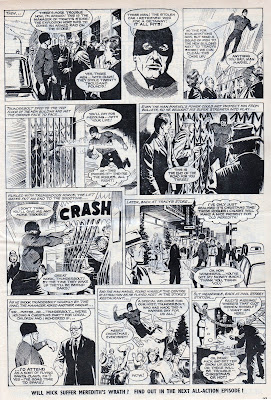 This Harry Secombe strip from the back of this issue of Buster was actually a reprint from Film Fun, and the artist, Roy Wilson, had passed away two years earlier, but any work by Wilson is worth showing... 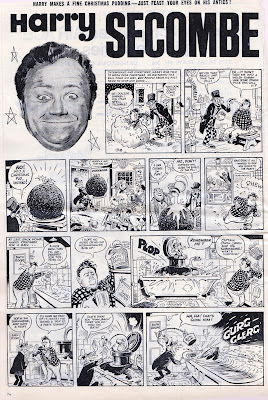 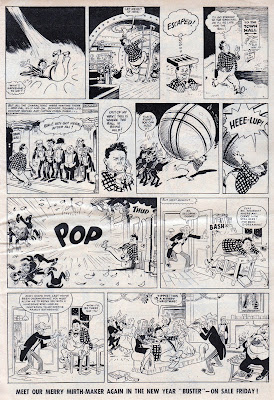 I hope you're enjoying these Christmas classics! Click on the images to see them larger. More soon!
Posted by Lew Stringer at 13:34

I don't think it was Nadal that did the large Buster image on the cover.. too many style differences.. but that being said, drawing the image compared to the smaller ones for the strip can lead to some differences.. either way, it's a good image that goes well with the strip to give a good cover.

Charlie Peace was always... an interesting subject.. I do not agree that people turn to a life of crime because they have no choice.. there is always a choice, even if not very good, but badly crippled at a steel mill at 14 didn't give him a great start.. it as an odd choice to do a comic about him.. probably more the case of take a name and when it was set and that's about it.

I'm not sure when Jack Pamby left Buster.. conflicting reports and I don't know enough on I'm to figure it out ^_^.. seam to have left late 60s, but others say mid 70s or even about a year after he started on it..

Thunderbolt the Avenger is a rather unfortunate name in hindsight - unless I'm mistaken, DC's owner Time Warner would own the character these days, but Marvel has teams called Thunderbolts and Avengers so it would be impossible for DC to use the character without a rename. So that's one character that won't be emerging from obscurity any time soon. Not that they use any of the British IPC comics archive anyway.

It's surprising there wasn't at least spot colour on the interior pages, especially on the centre spread. I guess that changed around the time Whizzer and Chips launched a couple of years later?

Ah this is more like it.absolutely classic comic. Wish the buster annual was still available - I seem to remember they were softcover and often got creased. Buster's mum looks a lot like Flo

Just no comparison between the Buster Christmas comic and the Danger Mouse 50 years later. There is just so much going on in very single panel of every single story in the Buster. Time to dig deep in the pockets and see if I can grab a Buster or two off EBay for Christmas!

Harry gets the ladies..:)

Thanks for the look at this issue. The only UK comic I was reading at the time was Lion so this is all new to me. One question though. Is this sixties Buster material part of the recent sale to Rebellion or the earlier one to Warner. I have some of the Beano and Dandy volumes that came out years ago (in fact I indexed one on GBCB and that was a major undertaking). It would be nice to someday see similar volumes for the Fleetway/IPC books but if two companies own the rights that would probably make it rather difficult to do.

As I understand it, John, the characters in Buster were divided between IPC and Egmont, with Egmont Buster himself and a bunch of others, but that's never been publicly clarified as far as I know.

Steve, Buster was the "Son of Andy Capp" so his mum was loosely based on Flo.

James, it was common for Fleetway comics of the sixties to be entirely black and white except for the front cover. Spot colour had been used by Amalgamated Press of course, but not so much when Fleetway took over. The practice returned with IPC's new comics in 1969 with Whizzer and Chips and then other humour comics such as Cor!! in 1970. Thunder had a few pages in colour too, but Buster still didn't have colour inside until the 1980's I think.

Whoever owns Thunderbolt the Avenger could still use him without a name change. After all DC publishes comics with old-time characters Captain Marvel, The Sandman and The Scarecrow even though there are contemporary Marvel characters with thosse names. In the case of the Big Red Cheese what they can't do is use the name for a comic.

Like Dick Turpin, Charlie Peace was a star in the penny dreadfuls. Their portrayal in these periodicals led to their romanticisation as loveable rogues. I believe Peace was hung for a crime he probably did not commit as a serves you right for the crimes he had got away with.

I remember being pretty shocked when years after reading Buster, I read that Charlie Peace was a real person who had been hanged. Any idea who thought putting him in a kids comic was acceptable, after all they could have stuck with the character but made up a name.

I guess that would have been the editors, Jack LeGrand or Sid Bicknell. It really was an odd decision. I always thought Charlie's evil leer in the header was a bit out of place too. That said, I did really enjoy the strip!