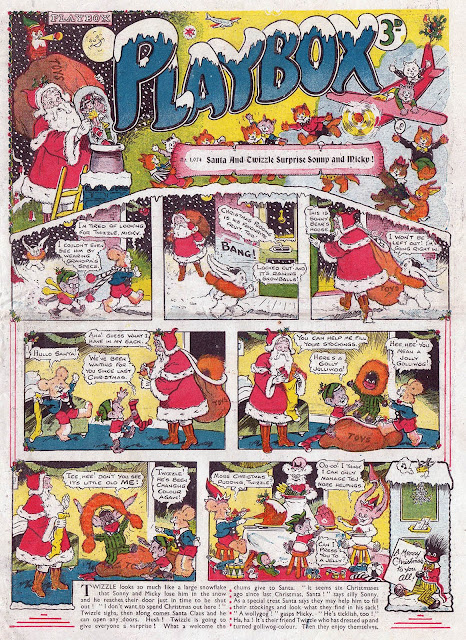 A few things occur to me about this 1950 nursery comic. One, it looks very old fashioned, even for 1950. Secondly, although the artwork is of a superb standard, it seems somewhat creepy and sinister to modern eyes, especially for a comic aimed at five year olds. Thirdly, the racial caricatures in some stories are alarming by today's standards. Kids were really being conditioned at an early age to normalise racial slurs and ideas. (I've decided not to show them.)

Playbox was published by The Amalgamated Press from 1925 to 1955, so it was entering its last few years by this 1950 issue. I suspect readers of the day were finding it outdated too. According to the research by the late Denis Gifford, the cover strip was by Freddie Crompton. That's a wonderful Christmassy title banner there, and worth posting on this blog for that alone.

Inside, its 8 pages were the usual (for then) mixture of prose stories and strips. I don't know who drew Chums of Jolly Farm but the line "I'm going to take this young dandy off to Fairyland" must have been written tongue in cheek even then. 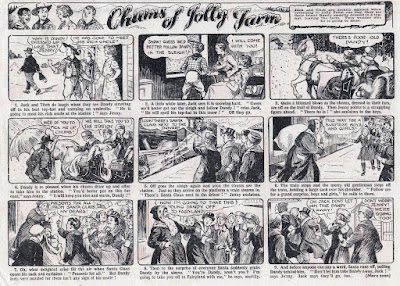 Again, using Gifford's research, it appears that Sidney Pride was the artist of Wendy... 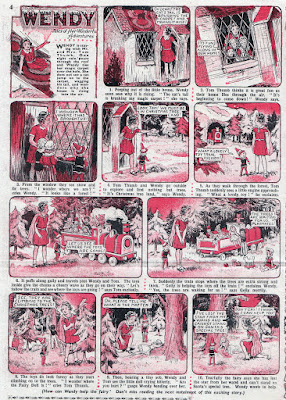 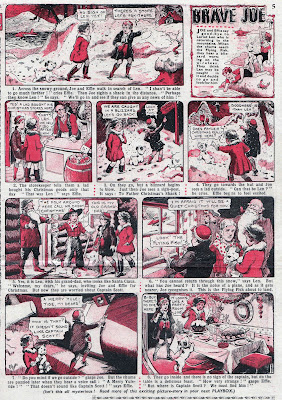 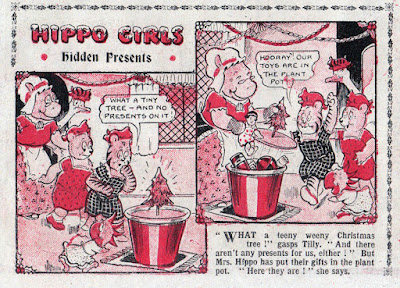 Flips is by Freddie Atkins...

I don't know who drew Skipper Dan on the back page, but Tuffy is apparently by Arnold Warden (although this one looks like George Wakefield art to me, but I could be wrong). 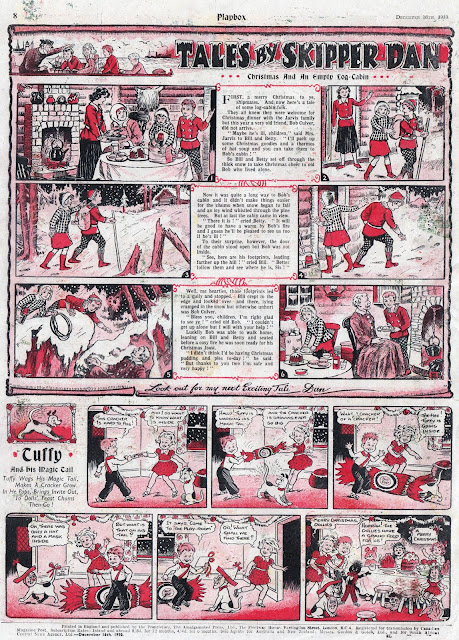 Some of your readers may be bemused by the short extent of this comic, Lew -- just eight pages? -- but when I was doing some background reading during editing the late Roger Perry's articles for downthetubes earlier this year, I was surprised how long paper rationing (which affected the Eagle, too, for example) lasted after the war. In fact there were quite spirited debates in Parliament about how it was damaging the newspaper industry and was blamed in part for some newspaper closures. Onnthe racial characterisations, while anathema today, I always find it frustrating that some make judgments on some elements of past fiction but not others, and indeed as we've seen recently (attempts to ban books like "To Kill a Mockingbird" in the US for its use of what is now considered racist terminology, removal of statues of historic figures from U.K. Universities because of modern condemnation of those portrayed), it is a shame there isn't a level of understanding from some to recognise the context of the time in which it was published, note it is now wrong, ignore it and move on. Where does this stop? How will some comic strips written even 10 years ago be judged in future - or even some written now?

It is of course a worry that racist and imperialist undertones are scattered throughout much of the fiction some of us grew up reading and you can't help but wonder how it influenced our world view at an impressionable age. For example, I grew up reading Books such as Doctor Doolittle at an early age , but there's no way Hugh Lofting's original version of the first book, written in the early part of the 20th Century, would be published now with its portrayal of an African prince trying to be white. As a kid, I can't recall that portrayal directly affecting me but now it seems even more an insidious than some of the "comedians" on "The Wheeltapper and Shunters Club" or some of Dave Allen's jokes.

Thanks for commenting, John. I did wrestle with whether to show the racist strips in Playbox or not, and decided in the end not to, mainly because there's another comic coming up that's even more littered with racial stereotypes and I thought it'd be too much in one week to show them all. When I show that comic I will include its racist content and explain it in context, although I do feel somewhat apprehensive at doing so.

It's debatable how much such material influences children, I think. There was still racist material around when we were kids, but if it's balanced by an upbringing that encourages an outlook of fairness and equality then I think it cancels it out. Sadly, I know some people my age who didn't have that balance and have racist attitudes to this day.