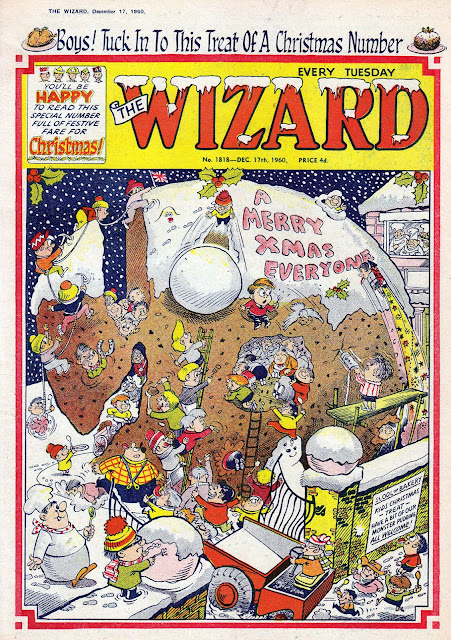 Strictly speaking, this isn't a comic. The Wizard was a story paper, full of prose adventure stories, but it's worth showing this copy here if only for the excellent cover by Bill Ritchie. (As most of you will know, Bill was the artist of Baby Crockett in The Beezer and many other strips.)

Inside this 28 page story paper there are several short text stories with various adventure themes and some contained a festive theme, such as this complete story, with art by Fred Sturrock... 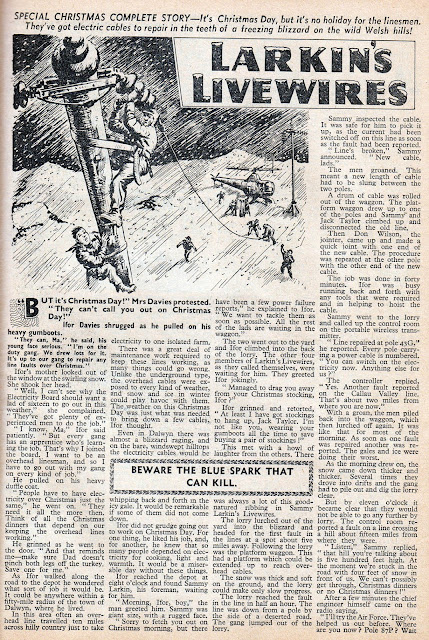 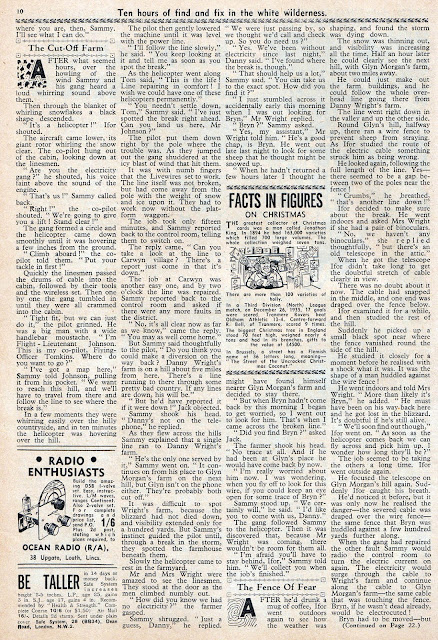 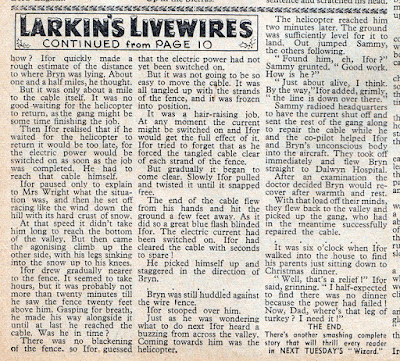 Peppered throughout the paper were a few cartoons and a couple of small strips. Christmas Capers is by George Drysdale, and Rocky is most definitely Bill Ritchie's work again. Ah, the old 'holly on the chair' gag. Still used in comics today. (I drew a recent version as part of The Bash Street Kids story in this year's Beano Christmas Special.) 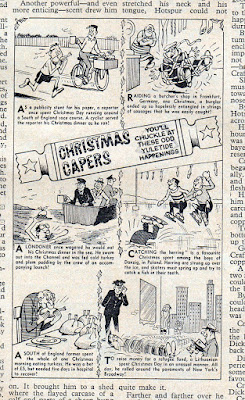 This issue also featured an advert for that year's Black Bob book as an incentive for a last minute Christmas present... 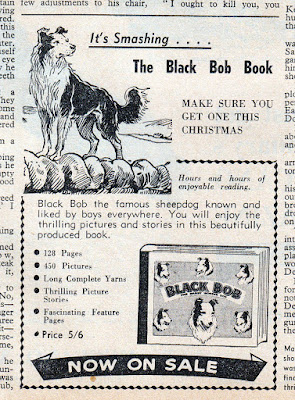 On the back page, another seasonal story; It Looked Like A Cold, Cold Christmas with art by George Drysdale... 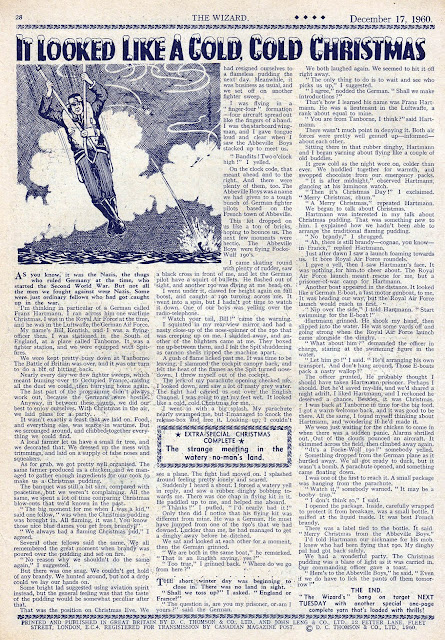 UPDATE: Phil Shrimpton showed me this cover of a 1953 Christmas Topper (the comic's first Christmas issue) by Dudley Watkins which had the same theme as the Wizard cover. 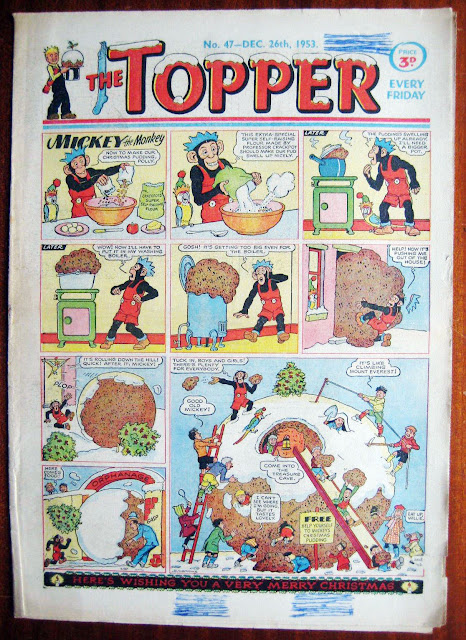 Phil has loads of British comics for sale on his eBay page and it's always worth a visit:
http://www.ebay.co.uk/sch/phil-comics/m.html

There'll be another vintage festive comic in my next post. Any guesses as to which year I'll be visiting?
Posted by Lew Stringer at 00:03

I'm very pleased to see, Lew, that you are now accepting my classification of The Wizard as a story paper rather than a comic. I feel vindicated this morning.

I don't think I've ever referred to all-text publications as comics, have I, Derek? Even when I reviewed your book two years ago I referred to The Wizard as a story paper:

It was on the adventure strip comics (eg: Valiant, Victor, etc) where we disagreed on the classification.

We certainly disagreed over what the nature of The Victor was, and by extension that of The New Hotspur, The Hornet etcetera, even the later picture version of The Wizard, and we still do, mainly due to the way we see them. You see a difference between a story presented in text form and one presented in pictures. I just see stories. In fact I am currently writing a book about Thomsons' story papers for girls of the same age range as that of those boys reading The Big Four (8/9 - 12/13). Apart from The Blue Bird (1922-1924), which was indistinguishable from Adventure and The Rover of that same period except for the fact that its stories were aimed at girls, there was no more effort made by Thomsons to produce anything for girls for 34 years. Bunty arrived in 1958. To be fair, Romeo came earlier but I don't count that because its stories were love stories whereas Bunty's covered a wide range of themes in the same way that the text papers, and the later picture papers, did for boys. Actually I wouldn't be at all surprised to learn that the presentation of Bunty's fiction mainly in picture form kick-started the fundamental change in the company's boys' papers in 1959 when The Hotspur morphed into The New Hotspur. Then came The Victor in 1961 and the rest, as they say, is history.

"You see a difference between a story presented in text form and one presented in pictures. I just see stories."

Well, myself and numerous others see an easy distinction between the two, which is why the former are called story papers and the latter are called comics. Good luck with your new book, Derek, and Merry Christmas.

The majority are not always right.

We must leave this discussion where it lies now because not only are we not on the same page we are not even in the same book. I remember making clear some years ago on Comics UK my view that a comic has to be funny otherwise there is nothing comic about it. Nothing will make me change my mind. Thank you for your good wishes for my book, Lew, and a Merry Christmas to you too. I'm off to Cornwall for a fortnight on the 22nd to spend the festive period as usual with my younger son Russell, Rachel (now Mrs Marsden as of last April 1st after living over the brush for getting on for a quarter of a century),Lois (10) and Alex (7).

You certainly made yourself clear, Derek, but as a teacher I'm sure you know that an opinion isn't a fact, no matter how strongly it's believed. The historical fact is that "comic" became a generic term decades ago widely used for publications featuring strips of any nature, whether they're funny or gut-wrenchingly serious, or anything in between.

From the Oxford English Dictionary (1996 edition):

Comic:
"a children's publication, mainly in the form of comic strips"
"a similar publication intended for adults"

comic strip:
"a horizontal series of drawings in a comic, newspaper, etc., telling a story".

The Topper cover is dated December 26th 1953 and my parents were married six days later on New Year's Day 1954 (it wasn't a holiday in England & Wales until 1974). Luckily for me they waited another 12 years before having a baby :D

Mr. Marsden, If the people making comics says they're comics who can argue with that???

To be fair to Derek, the editors themselves used to call adventure comics "papers", so he has a point. However it was never completely accepted by everyone, and certainly not in America where Detective Comics for one was clearly calling itself a comic from day one in 1937.

In the UK, the editorial practice of calling them "papers" dropped out of favour a few decades ago, and they've certainly been referred to as comics by editors, contributors, and readers for as long as I've worked in the industry.

Really enjoying your blogs as always.
Christmas Capers was actually the work of George Drysdale and the illustration for 'It Looks Like a Cold, Cold Christmas' was also his. Thomsons did like their staff artists to be adaptable!'Larkin's Livewire' was the work of Fred Sturrock.

Many thanks for putting me right on that, Ray. I've updated the post with that info now.