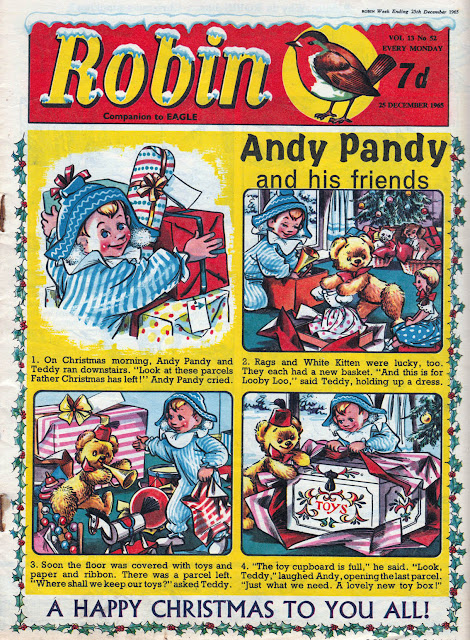 Today we're looking at a comic that was aimed at the early learner age group; a "nursery comic" as they used to be referred to, or a "pre-school comic" as they're called today. Robin was published from 1953 to 1969 and was part of the Eagle stable of titles. The idea being that children would start off with Robin, graduate to Swift, and then, when they were older, onto Eagle or Girl. Looks like they missed a trick not naming that last one after a bird. Or maybe they did. Hyak, hyak, as Sid James would say. (I'll get me coat.)

This issue is from Christmas 1965 and features 16 pages for 7d. Relatively poor value you might think, but Robin had top-quality photogravure printing (like Eagle and TV Century 21) and four of its pages in glorious colour. The cover strip featured Andy Pandy, who was still hugely popular in 1965 even though his Watch With Mother TV series was a repeat from the 1950s.

Inside, the brilliant Basil Reynolds, who had illustrated strips for Mickey Mouse Weekly nearly 30 years earlier, was still producing work of the highest quality on The Adventures of Bizzy Beaver. Take note also of the little cartoon running across the bottom of all these interior pages. They show a train picking up characters from each strip, adding more passengers as the comic progresses. 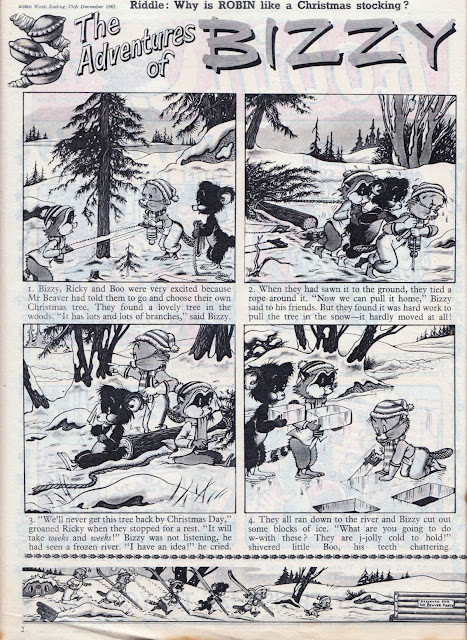 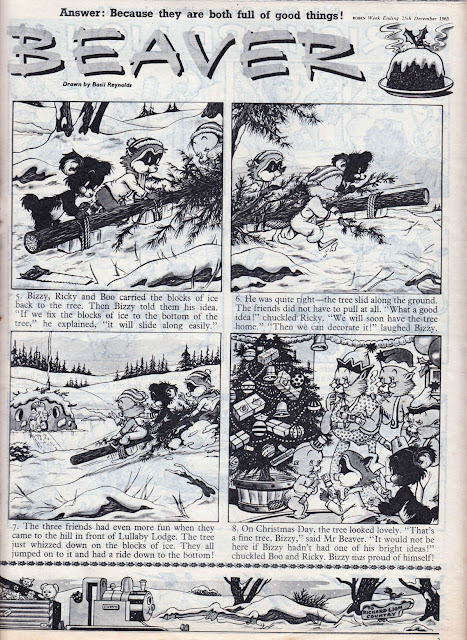 A few pages on, and in the centre pages it's The Funny Adventures of Nutty Noodle. The artwork in Robin is excellent throughout. It was considered paramount that nursery comics should use the best artists as they required illustrators who could tell a story clearly for the benefit of young readers who were naturally discovering something new about the world every day. No artistic shortcuts or awkward layouts were wanted, as that might confuse them. 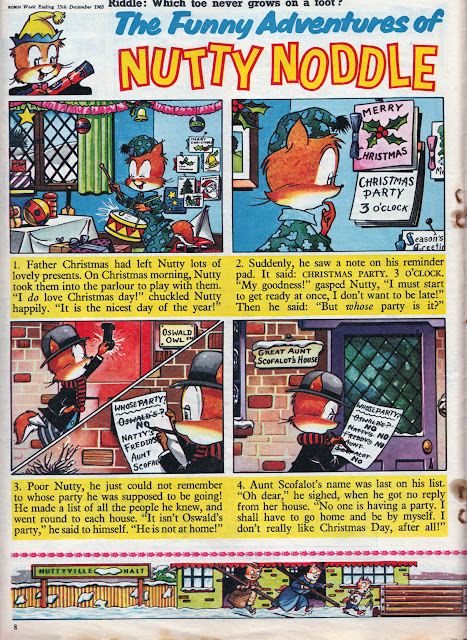 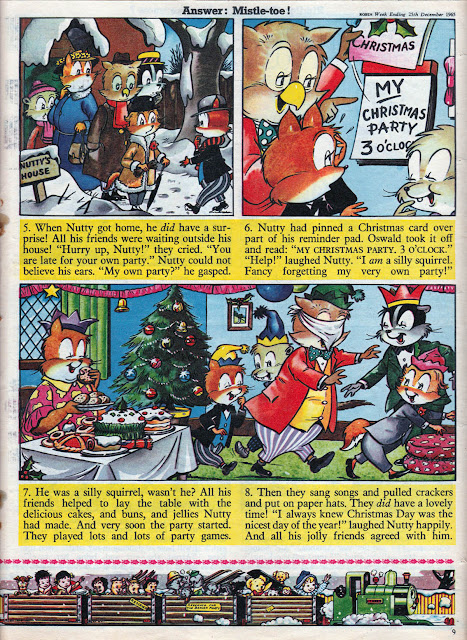 The Runaway Princess is a great example of John M. Burns' earlier work. Again, top quality work, and John is still working in the business today, - back on 2000AD this week in fact! 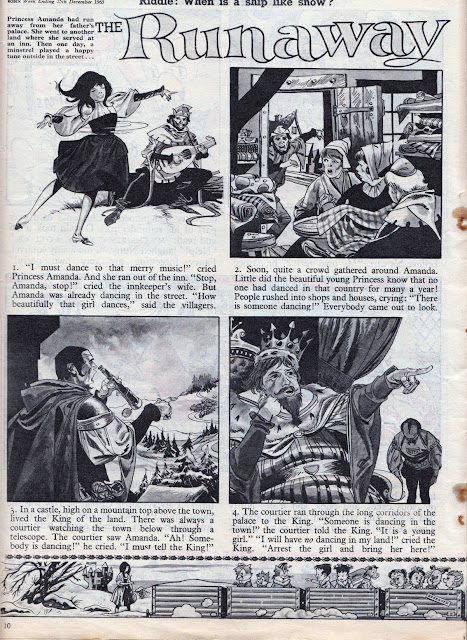 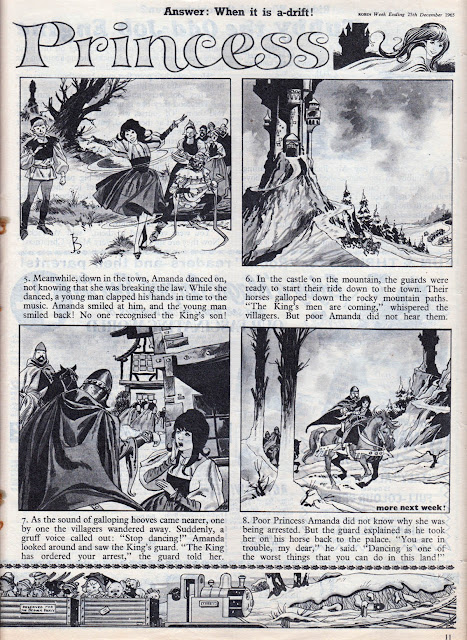 The little mini-cartoons at the bottom of the pages reach their destination on the back page, with an excellent full size illustration. I'm not sure of the artist; Basil Reynolds again perhaps, or someone following his style? 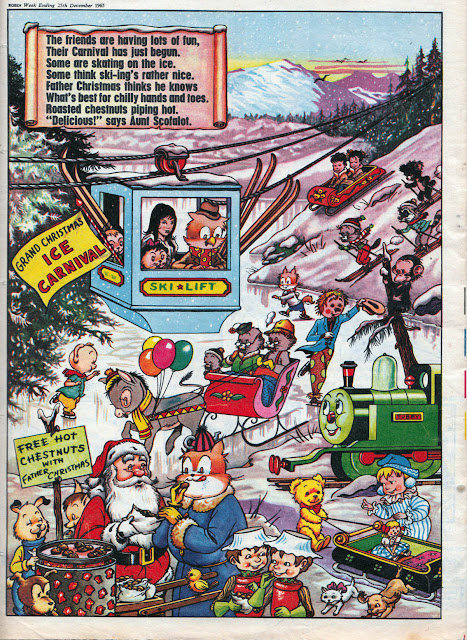 I hope you're enjoying these vintage Christmas comics. Post your thoughts in the comments section below. I'll be back with another festive flashback tomorrow.
Posted by Lew Stringer at 00:02

In my neck of the woods, Andy, Ted and co. were regular mid afternoon favourites on the ABC network until around 1973.(two years before colour TV started here in 1975)

Am I imagining things, but isn't that Bill and Ben the Flowerpot Men in the final illustration?

Yes, Bill and Ben appeared in a short strip inside but it didn't have a Christmas theme so I didn't include it.

'Watch With Mother' featuring a rotation of Andy Pandy, Bill and Ben, and The Woodentops, was shown on UK television well into the 1970s here too. Possibly even later.

Love the train at the bottom of the page...great you are showing a nursery comic..

My nursery comic of choice was Teddy Bear in 1964/65. I would love you do a Christmas feature on this great little comic.

I'm afraid I don't have any of those, Ken. I never had nursery comics as a kid, apart from Bimbo very occasionally. It was straight onto Dandy, Beano, and TV21 for me. I bought this issue of Robin recently but it's the only one I have.

Pity Lew, having browsed a few coupes later in life, it really was a quality comic. They do occasionally pop up for sale on EBay but usually only late 60s early 70s copies.

This one example will be enough for me. I'm at a stage where I need to stop buying old comics as I'm running out of room even in a three bedroomed semi! :)

When I was a boy, in the mid-1970s (probably about 1977 or so; I would have been six years old), I was given a couple of Robin Annuals from circa 1961 and 1962. I still owned them until I went off to college in 1989. I have no idea what happened to them. I however, have many fond memories of the cartoons, and of the stories. The fairies who had black hair and wanted to be blonde (and who were all extremely well drawn), the sealion Nanuk and his Eskimo family, Andy Pandy, the Flowerpot men, and Nutty Noddle of course.I wish I could find them online to download.