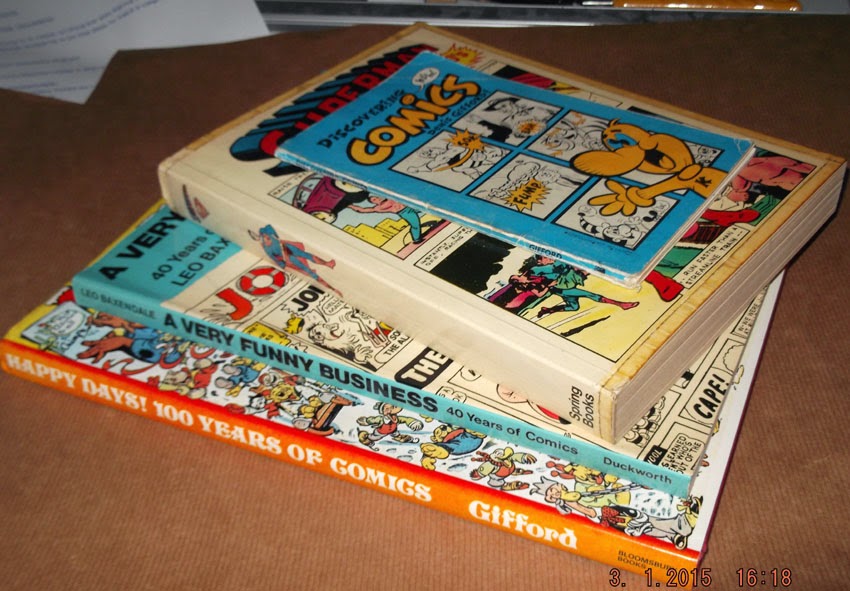 This is the first of an occasional series of posts where I'll be giving a brief look to the books on comic history that inspired me, and which are well worth seeking out on eBay, car boot sales or wherever you're likely to find old books.

The book that kicked off my interest was The Penguin Book of Comics, which I've already blogged about several years ago (see here). That same Christmas (1971) I also had the book Superman from the Thirties to the Seventies, a whopping 386 page softback reprinting many Superman strips up to that point. (There was also a Batman companion volume but I didn't have that book until its second printing in 1979.) 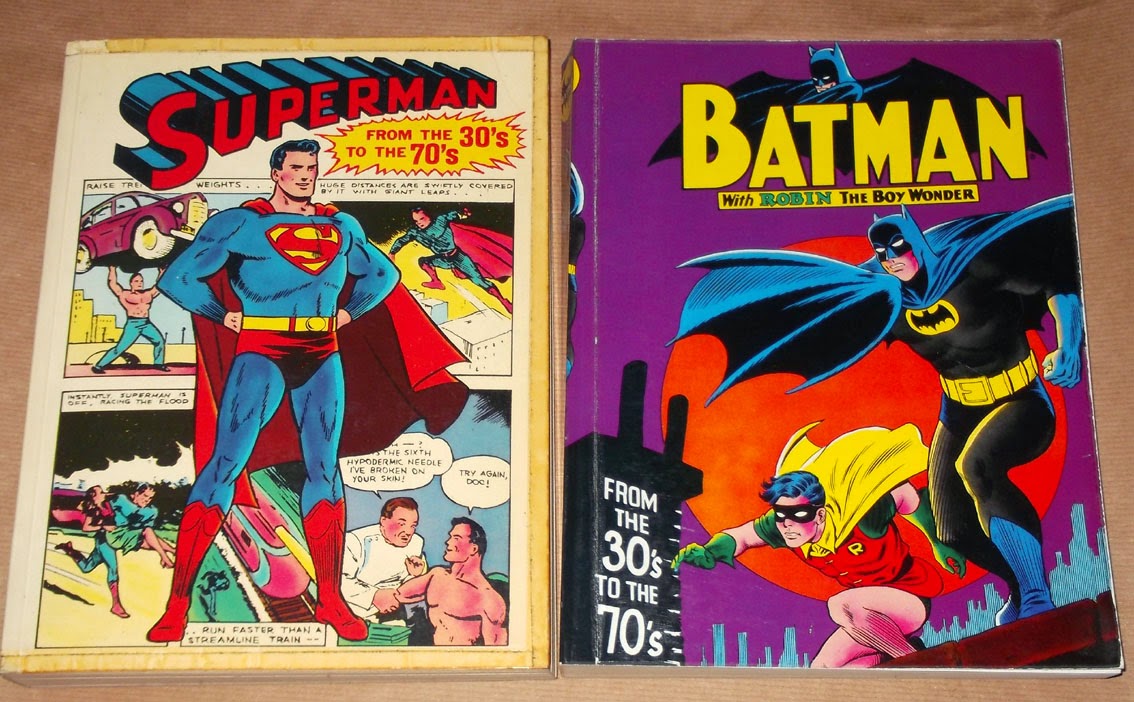 Superman from the Thirties to the Seventies had a nine page introduction by E.Nelson Bridwell, followed by page after page of classic comic strips. 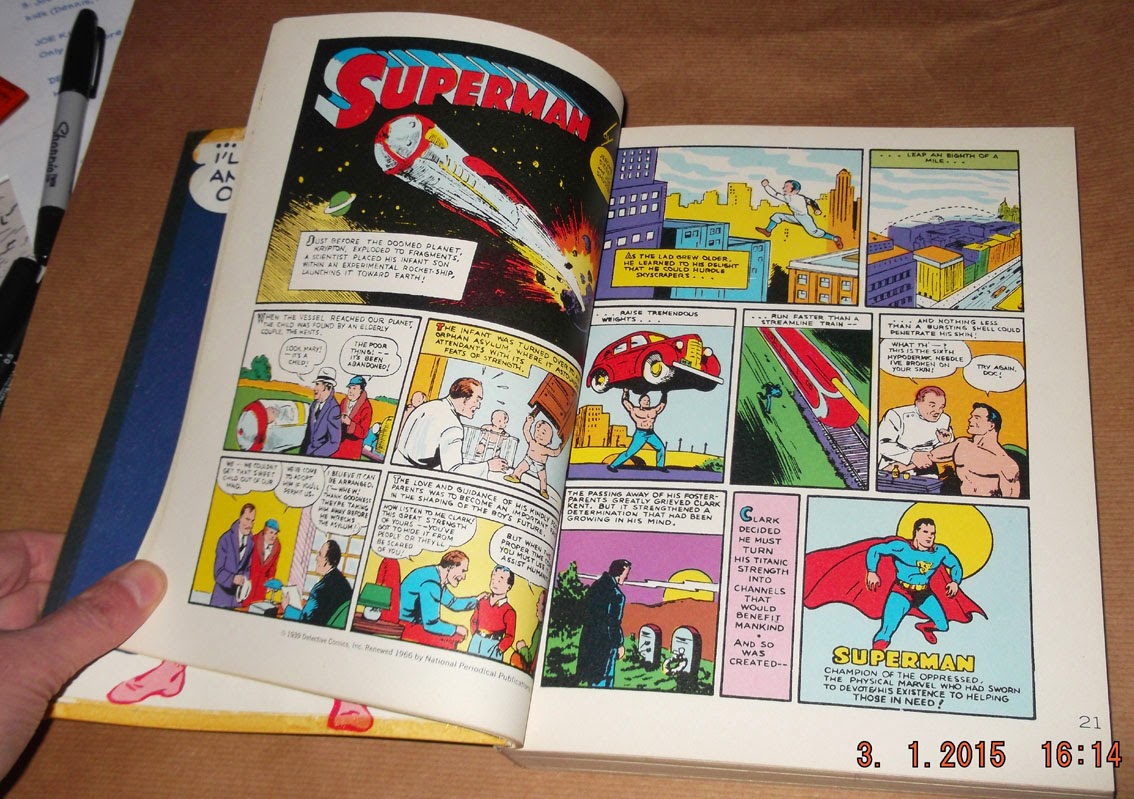 Most of the pages were in black and white, but I didn't mind that at all as it gave the reader a better focus on the artwork. 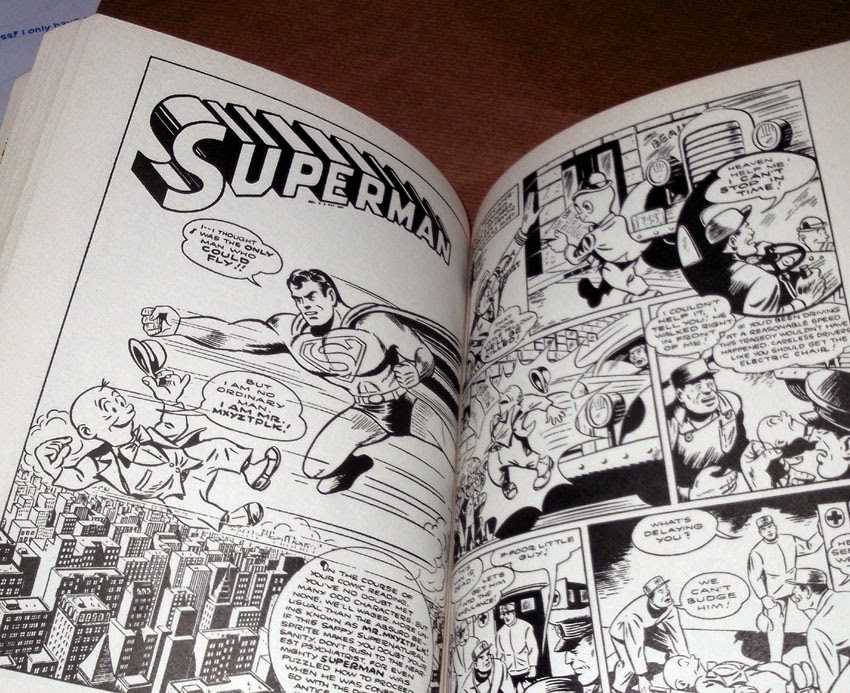 After the Penguin book and this, I was always on the lookout for any books on the history of comics. A few years later, in 1975, when I should have been researching for my 'O' Levels, I found two books in the local library that I found so fascinating that I used to borrow them as often as I could. One of them was Discovering Comics by Denis Gifford... 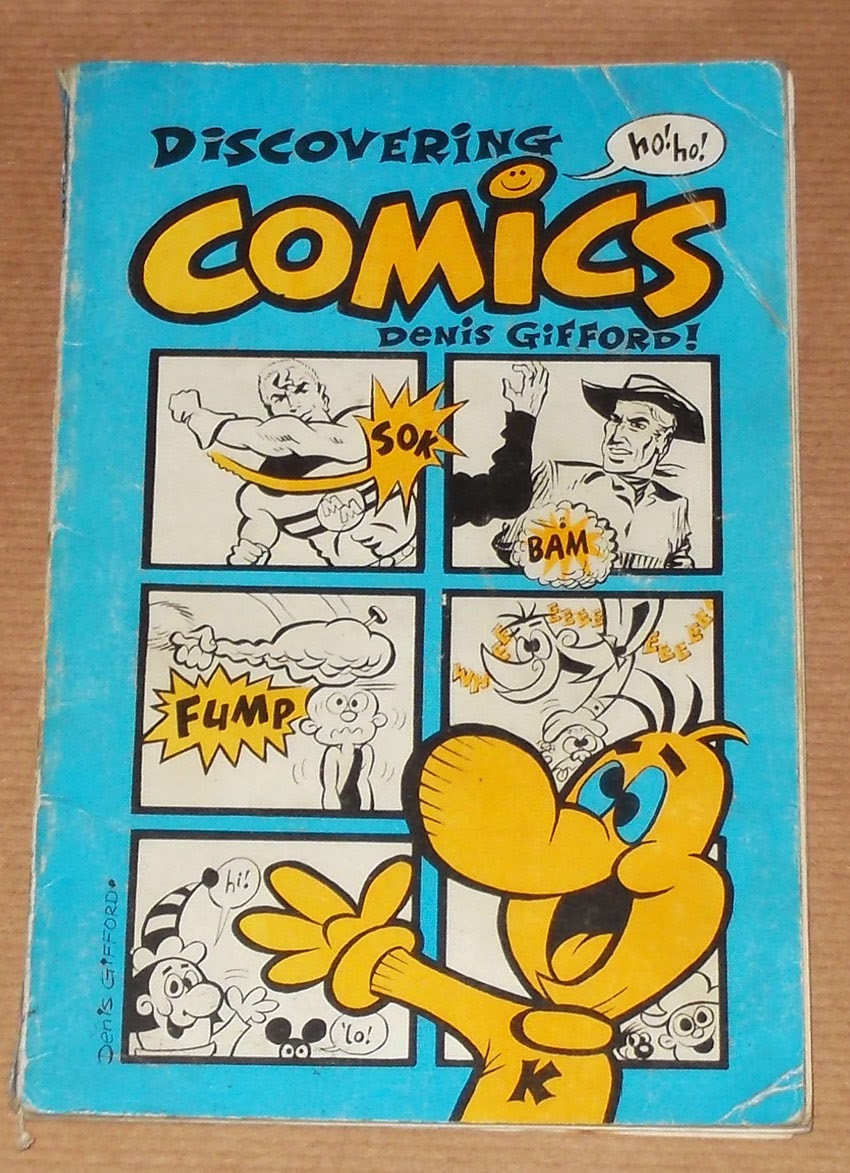 This small, pocket-size 64 page softback was only a very brief tour through the history of comics but it still proved invaluable for anyone interested in the subject. 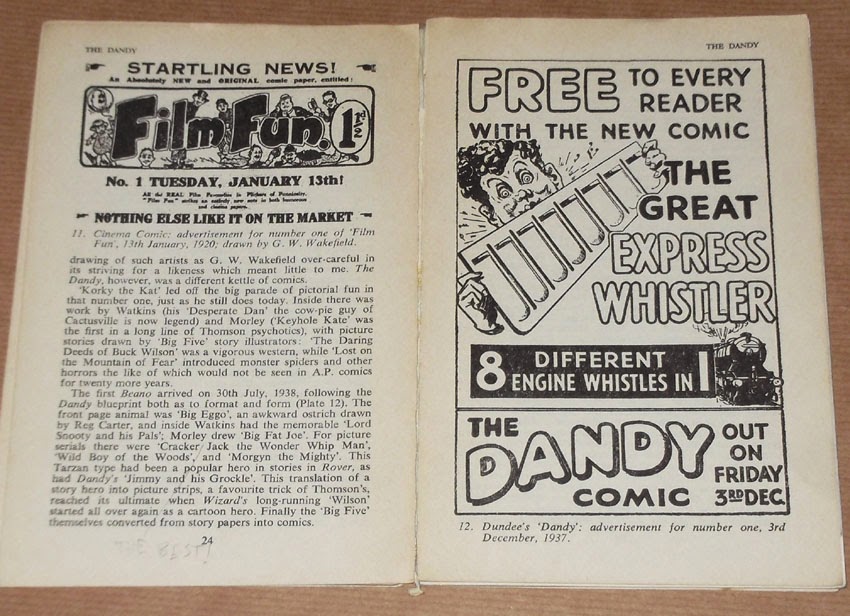 It was here where I first read about horror comics, with Gifford briefly touching upon the 'vigorous' campaign against them. I wanted to find out more, but all the book provided was the cover to the American edition of The Vault of Horror No.12 (first issue) opposite a cover of the nursery comic The Rainbow! 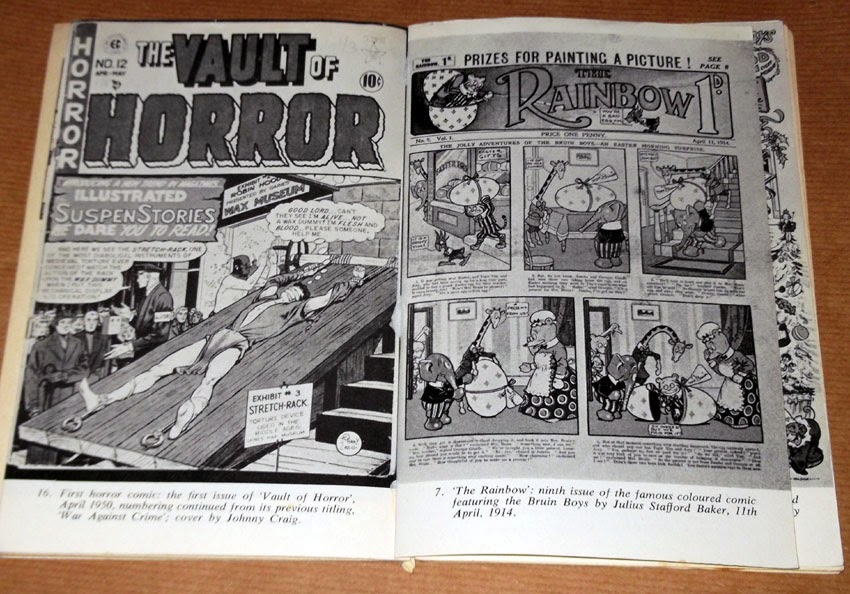 One very useful part of Discovering Comics was Denis Gifford's listing of the cover dates of all the new comics that were launched between 1960 to June 1971. There are a few omissions including Commando, which is ironic considering that's the only 1960s comic still being published today. 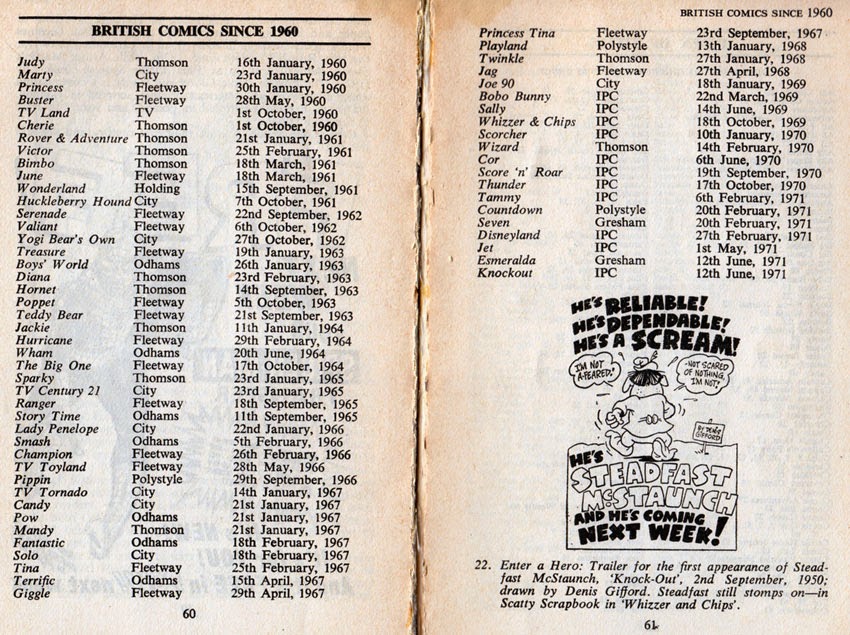 The other book I found in my library was Happy Days: 100 Years of Comics, also by Denis Gifford. A nice big 128 page hardback, light on text, but with plenty of reprinted covers from across the decades. 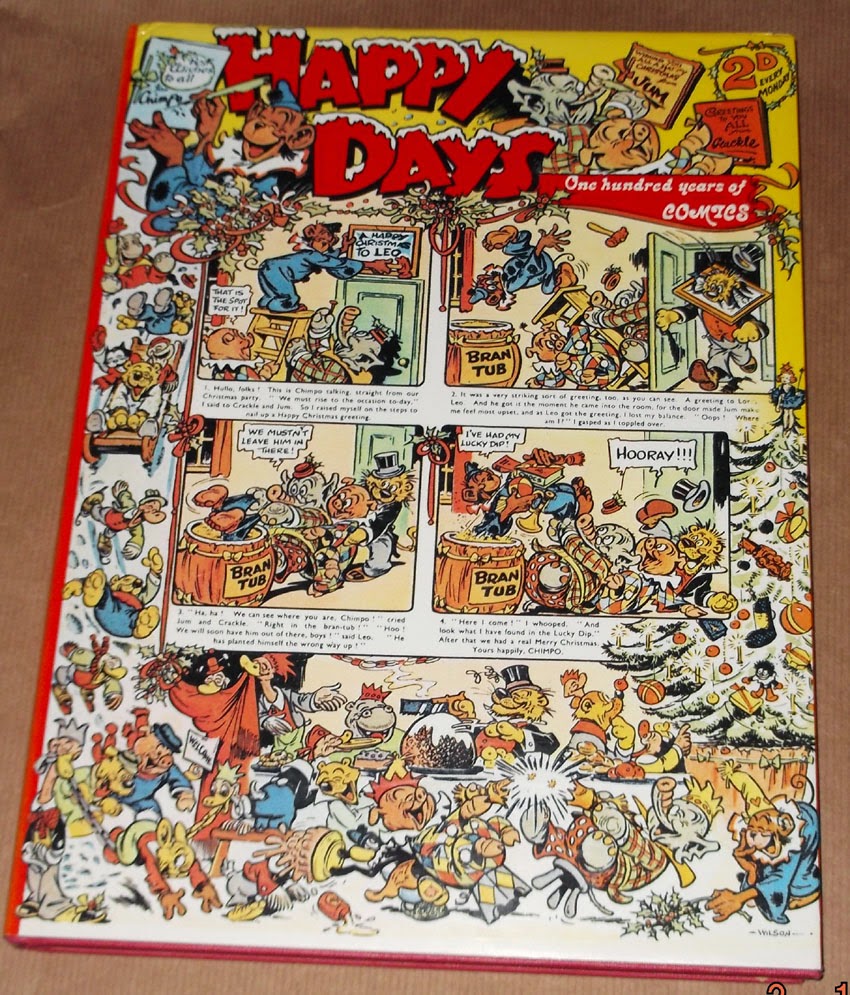 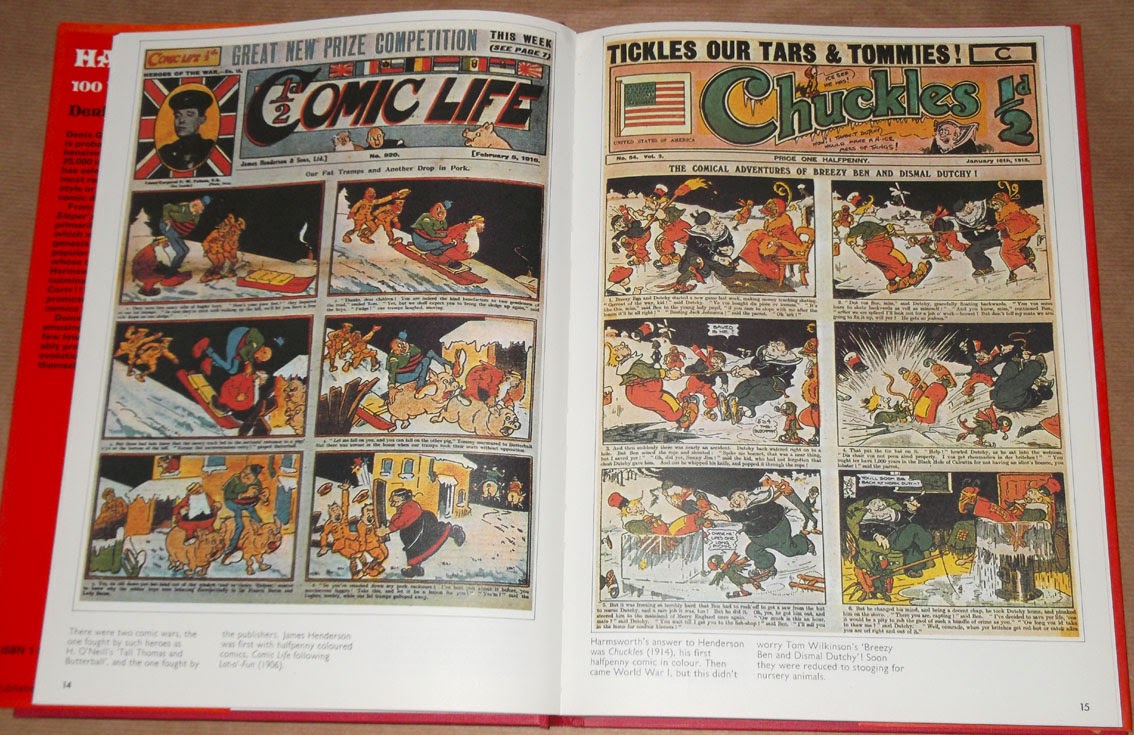 It was mostly in black and white or single coloured ink, but that didn't matter as the book was a visual treat of comic covers... 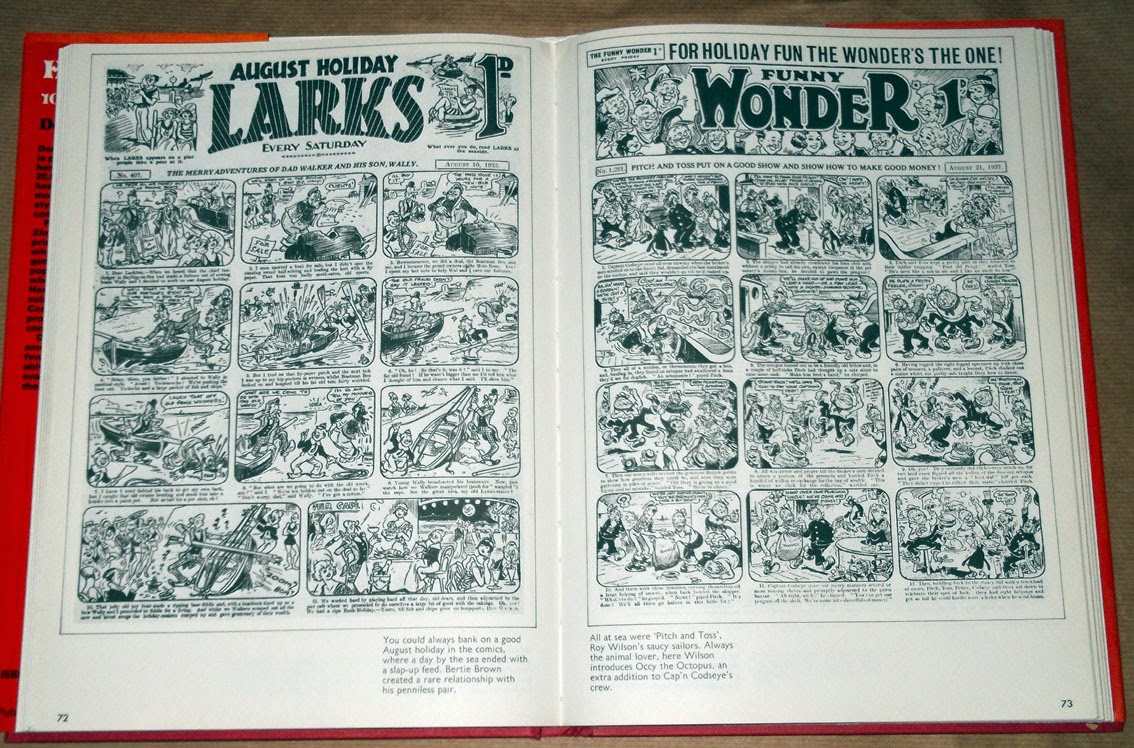 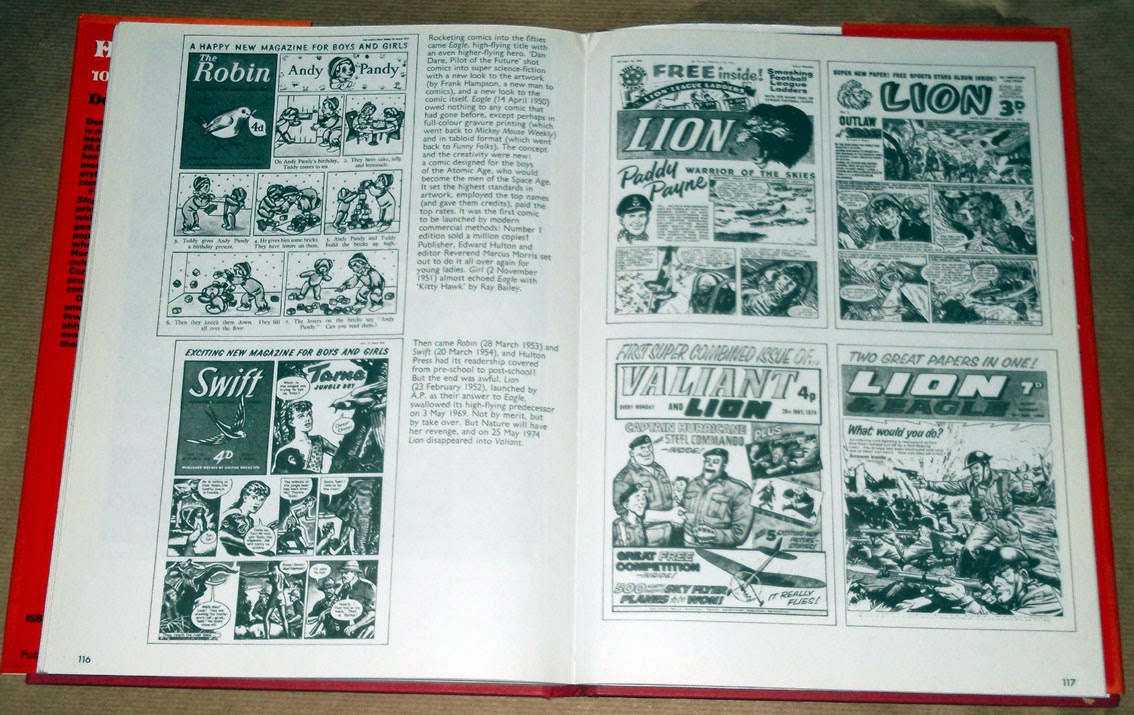 Those books were out of print when I found them but years later I picked up Discovering Comics at a second hand bookshop and Happy Days was reprinted in 1988.

In 1978 Leo Baxendale's autobiography A Very Funny Business was published. What an excellent book! In this 136 page softback, Leo took us through his development as an artist, told us anecdotes about the business, covered other key artists in comics (such as Davy Law and Ken Reid), and pulled back the curtain on a behind-the-scenes look at the British comics industry. 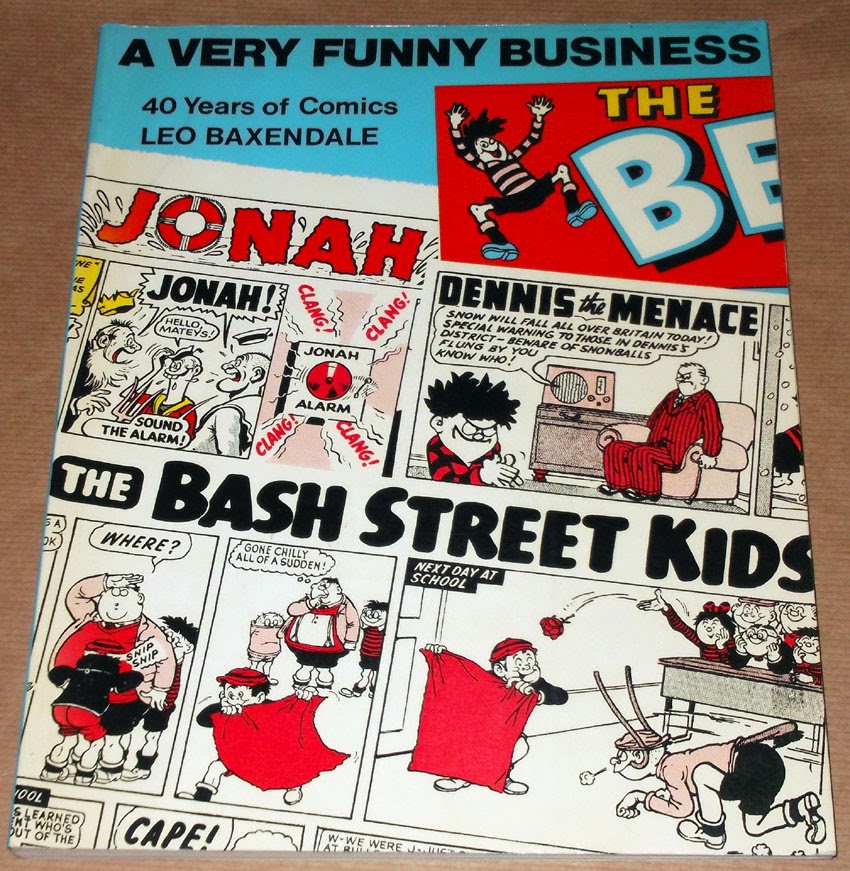 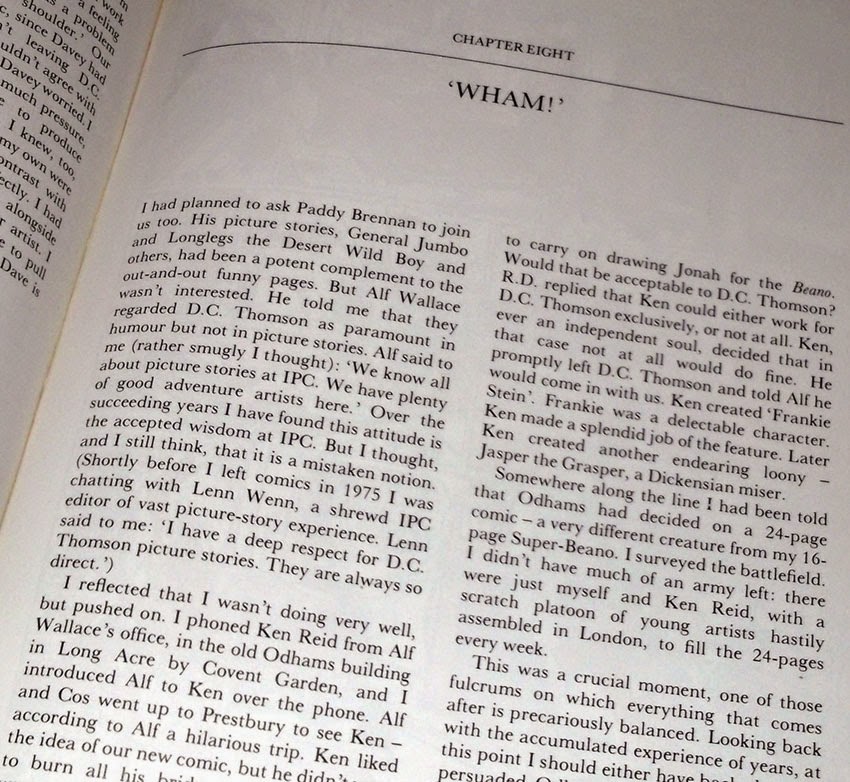 It was also well illustrated with sharply reproduced examples of his work along with pages by other artists. 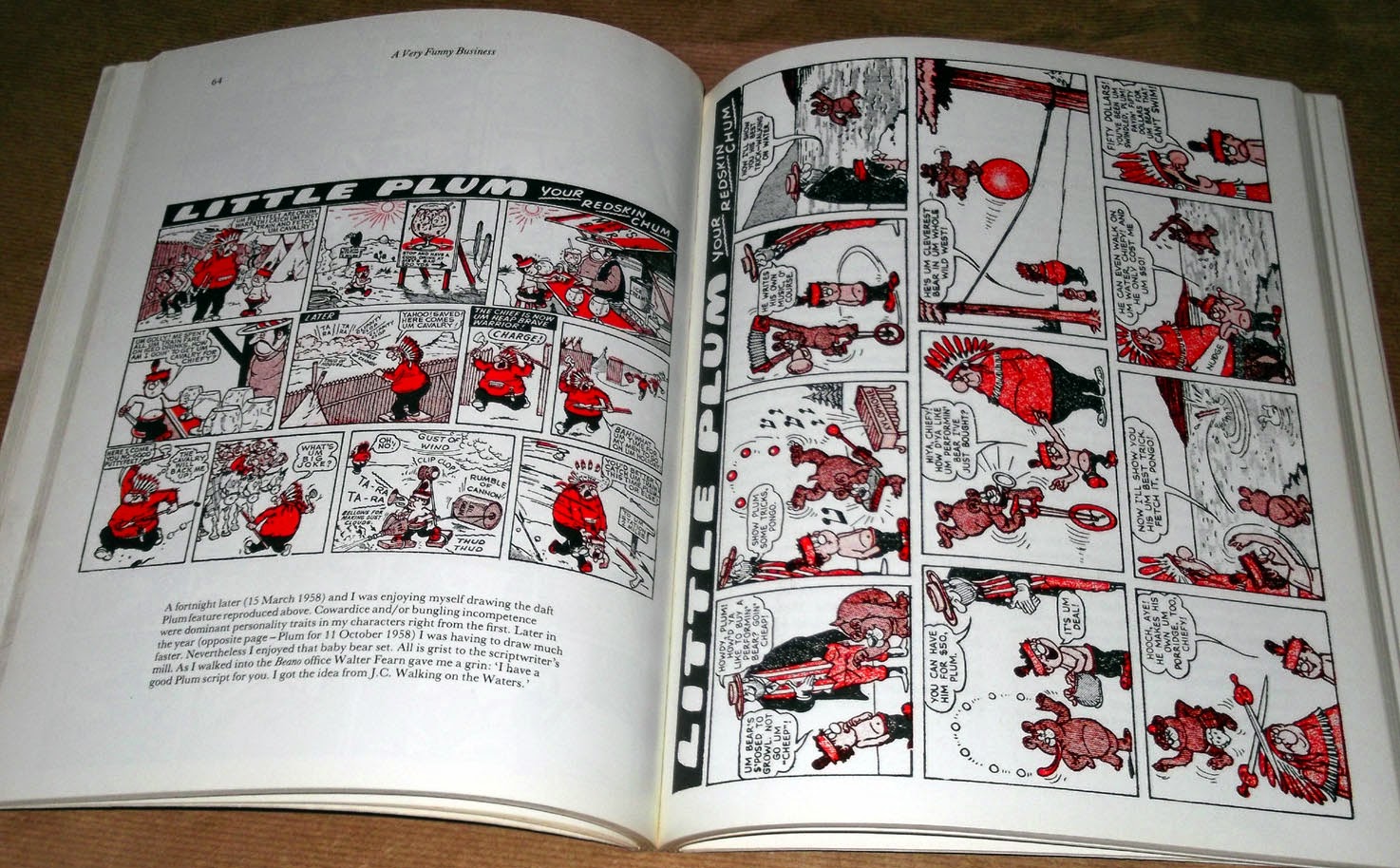 A Very Funny Business was instrumental in playing a key part in inspiring me to submit work to comics and also clued me in as to what to expect (eg: no payments for reprints). The book was quite an eye-opener - and a very good read too.

All of these books are long out of print now of course but they're all worth looking out for second hand. I'll post on the subject of a few more Books about Comics at a later date.
Posted by Lew Stringer at 17:24

What a brilliant idea for a series! I love books about comics. I have the Happy Days book, but none of the others on this post. Looking forward to further posts in this series!

More to follow, when I get around to it.

One of the best books about comics I have ever read is The Ten-Cent Plague by David Hajdu. Not UK comics related, but an excellent history of American crime and horror comics and an entertaining read. I would have loved it to have more illustrations but there is plenty other books that contain lots of them - Four Color Fear and The Horror! The Horror! are two excellent examples. Also Foul Play! compiled by Grant Geissman.

Yes those books are excellent. I gave a couple of them a plug a few years ago:
http://lewstringer.blogspot.co.uk/2011/10/victory-of-horror-comics.html

A good post , Lew. I suppose if we are interested in comics at all , we'll get into fanzines and then into the heavier better produced tomes. Like yourself, i have collected all those books you mention and more.I've got too editions of the Penguin book of Comics, for instance. The Happy Days one came later in the mid 1970's and it was a revelation . ...worth it for that beautiful Roy Wilson cover artwork.Now ..that man's art was comedy and fun ... a comic genius.His work just spelt life. I bought it at around the same time as the big hardback "Comix" by Lee Daniels and the first edition of Estren's "History of Underground comix" . I got them both in Leeds'"Books" ...a shop which stocked underground comix and all sorts of esoteric literature.Nostalgia press brought out the huge book on EC comics around that time too . I got it in Compendium Books in Camden in London along with their huge Little Nemo collection...I dare say it's worth over £100 now ..even though the EC line has been reprinted since in many different formats.That was the start for me and i'm still at it !!!

Compendium Books was a good shop. I think that's where I bought the Les Daniels Comix one. I also had Steranko's two-volume History of Comics, which I bought from Dark They were and Golden Eyed in 1976. I forgot to mention those! (Although I'm mainly focusing on books that cover UK comics. It'd take forever to cover all the books on American comics.)

Fanzines were another source of info of course. I've covered some already but I'll feature them again in another post sometime.

Have all these except the Baxendale bio. I remember being very excited about the two 30s to 70s books and a couple of years ago found a hardback edition of Shazam 30s to 70s in a local charity shop...hadn't even known that existed before I saw it. Ah, DTWAGE...remember making a pilgrimage there as a youngster. Steranko is hinting at a reprint of 'History' I believe. My recommendation for a good comics book is Martin Barker's 'Haunt of Fears' covering the UK's anti-horror comics campaign of the '50s.

There was a Shazam! one? I never knew that. I'd certainly have wanted that back when I was a kid as I bought DC's Shazam! comic every month.

I've just looked it up and it was published several years after the Superman and Batman ones, in 1977. Don't know how I missed it as I was frequenting comic shops regularly then.

I think there was a Wonder Woman one too, but when I was a kid I thought Wonder Woman was a girls comic so I never read it! (Same applied to Lois Lane and Supergirl.) These days though I really like those classic Kurt Schaffenburger Lois Lane stories of the fifties.

Yes, 'Haunt of Fears' is excellent. I met Martin a couple of times at comic cons in the 1980s when he was promoting his books. Nice guy and very interesting to listen to the research he'd uncovered.

I had forgotten about the two big Steranko books, Lew. They were a great introduction to the golden Age comics. It's a pity the binding wasn't done better though .The cover popped away from the staples on Volume 1 very easily. They were so big that they really needed hardcovers,

My Steranko books are still intact, but I've only read them once, very carefully, back in 1976. It's a shame he never continued with them as intended, although the American Comic Book Chronicles series from Tomorrows serves that purpose (and they're hardcover and all in colour).

I have spotted some of the Gifford books over the years, and I have the Complete Catalogue of British Comics by him with values and all! Invaluable book, another I use quiet a lot is the Comic Book Priceguide published by Titan, I have 1988 edition, again really handy for title lenghts, dates started, Holiday special etc.
A Very Funny Business is new to me, Ill have to keep an eye out.

I think I have all of Denis Gifford's books. They're very informative (although mistakes do creep in).

Good luck hunting down Leo's book. Most people tend to hang on to it but you might find one. He published a few others afterwards but Funny Business remains my favourite.

Leo's book is one of the best. I had trouble finding it.I finally got a copy in an ebay auction .I know he created his own character books later , but did he write more about the industry like Funny business?

They include anecdotes about his time in comics, yes. More info on Leo's own website:

I too have the Leo Baxendale book Lew. It is quite superb; especially in giving some insight into just how Thomsons operated; which rather surprised me (I detected that it was pretty strict to put it mildly) I think General Manager R.D Low was an admirer of how `Walt Disney` ran his empire!

Leo also mentions Iain Chisholm (`Chiz`) who he became good friends with. Iain (after Leo left Thomsons) went on to edit `Sparky`. Leo's book really is worth seeking out on E.Bay.