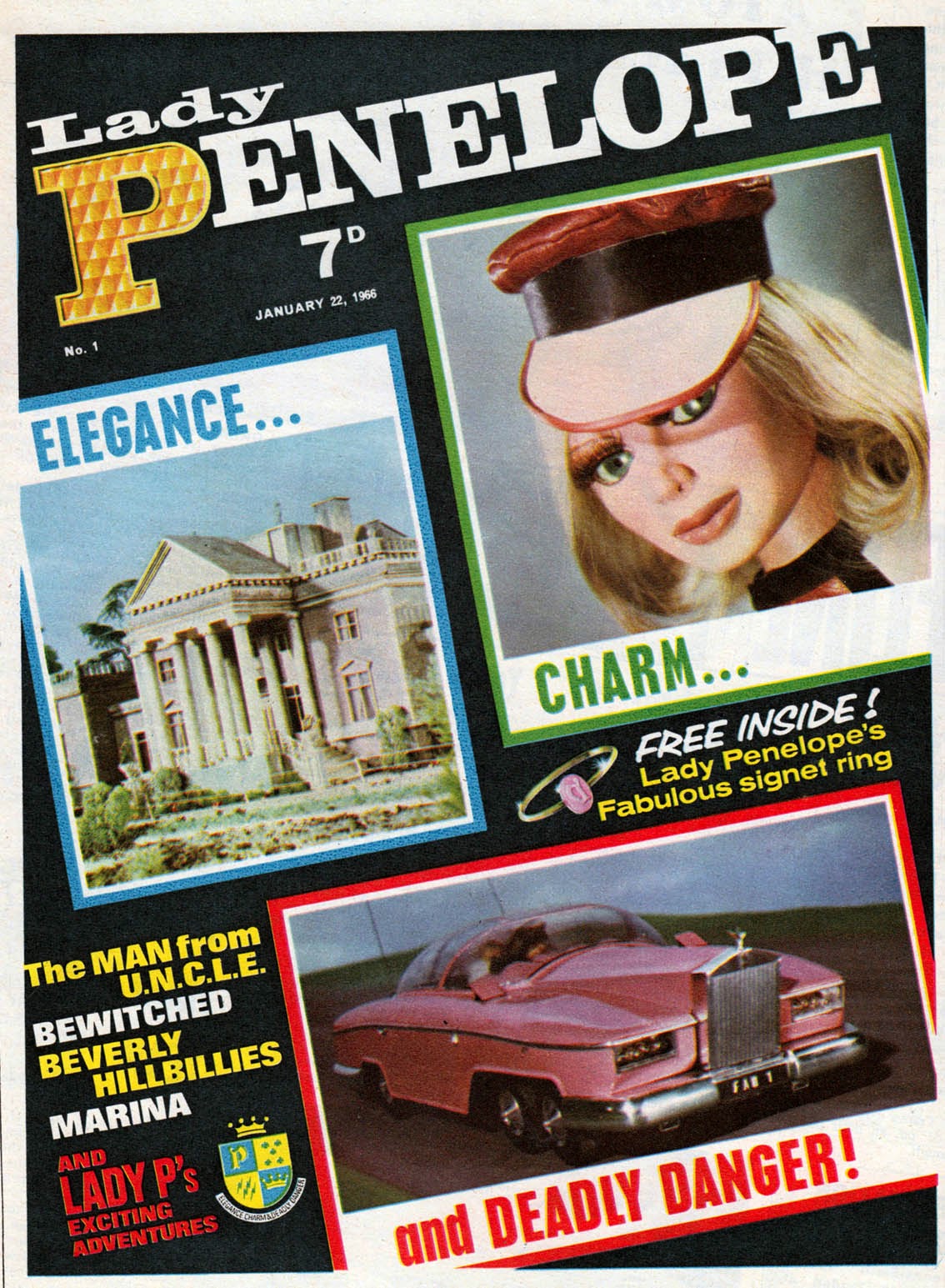 When it came to cover designs for comics, Century 21 produced some excellent ones for City Magazines. The flagship title TV Century 21 was groundbreaking with its futuristic newspaper design of course, but the comic's companion titles looked great too. For example, above is the cover to Lady Penelope No.1 from January 1966. Its contemporary style instantly made other girls comics look old fashioned. (And the cover design would change from week to week just to keep it looking fresh.)

Even Joe 90 Top Secret looked more exciting and modern than most other boys comics when it was launched in January 1969. Here's the cover to issue one, with artwork on the strip by Frank Bellamy... 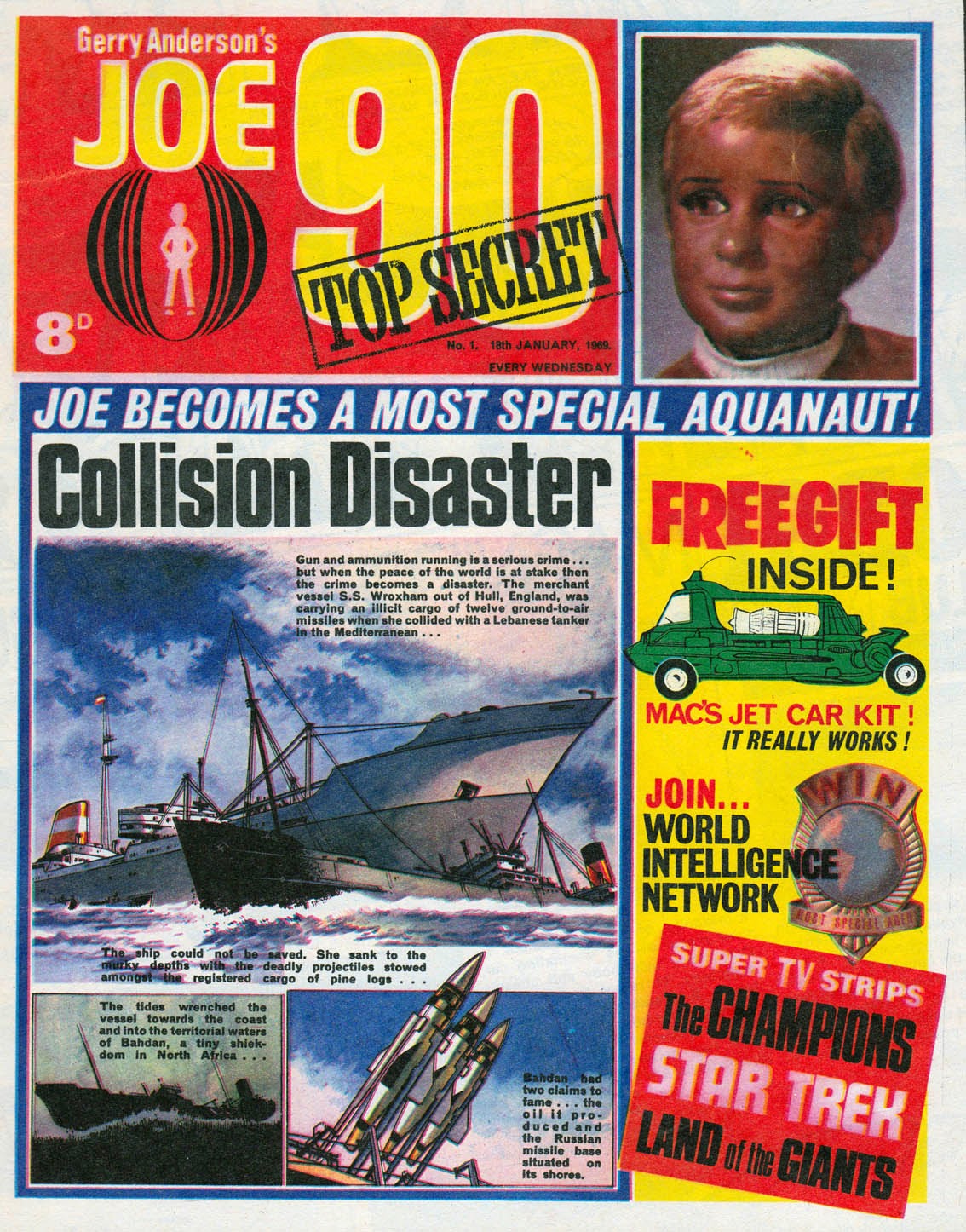 The interesting thing is that Century 21 didn't follow what IPC, DC Thomson, Odhams, or anyone else were doing with cover design. They ignored formula and did their own thing. Admittedly Joe 90 didn't last long but both TV21 and Lady Penelope had respectable runs. Cool-looking comics for the coolest decade.

(By the way, I don't have copies of these issues but the adverts for them in TV21 were clear and sharp enough so I scanned those, enlarged them, and cropped off the advertising stuff that was around the cover images.)
Posted by Lew Stringer at 17:12

I was born in 1966 so Joe 90 is the first Gerry Anderson show I remember watching in the early '70s. My gran had a colour TV and it was a big thrill to be able to watch the show in colour. Great opening titles too with him sitting in that big spinning ball thingy.

It wasn't a favourite of mine I must admit, but I have the box set to watch. I haven't seen the whole series since the 1960s so I've never seen most episodes in colour.

Both were just natural extensions of TV Century 21 and you wouldn't expect either comic to be anything less than excellent. I would bet money that the Dutch counterpart, TV 2000, when in its tabloid incarnation, would be another masterpiece. I did manage to track down one of the later copies, but by this time it was reduced in size and was very similar to the UK Top Sellers (e.g. Tarzan) comic books.

I only have one issue of TV2000 and that's a later, smaller one too. From what I can gather, the early covers were based on TV21 and Lady Penelope but translated into Dutch of course.

Thanks for that link, Lew. I've bookmarked it, as I really do NEED to read that in full!
A few years ago I did see a picture of an early tabloid issue with a photo of the TV Batman on the cover. I'd really like to get hold of a copy of THAT particular issue!

Great Post Lew, they certainly were striking covers. I seem to remember seeing an image of the Joe 90 cover which was either a mock up or a pilot issue which was slightly different from the published one. However I can only remember that Journey to the Centre of the Earth was one of the features mentioned in the cover blurb. Has anyone else seen this, or is the product of too much cheese at bedtime? Again.

That's news to me Andrew but I'm sure you didn't imagine it. Sounds very interesting! Let me know if you ever find it again.

I'd really like to see a compilation of dummy covers from over the years as some comics never got the green light of course. (Spitfire, the never-published sixth Power Comic being one.) Sadly most were no doubt destroyed years ago, although some do crop up. (Dez Skinn has a few on his blog.)

Probably not, but I see Lady Penelope Comic as more female based.. which it appears to be.. but the strips include The Man from U.N.C.L.E... Bewitched and the Beverly Hillbillies? interesting choices to say the least

It was a girls comic so attempted to have as many TV related female stars as possible in its strips. Man from UNCLE was there because a) it was a spy series, b) it was very popular, and c) girls fancied David McCallum.

As for the Beverley Hillbillies and Bewitched, two comedy relief strips and both were very popular TV shows at the time.

Girls comic or not, given the TV21 connection, I would have bought it - if ONLY Ihad had the GUTS to pick it up at the time!
Alas, I was not THAT brave!

I had the first issue, expecting it to be like TV21 but didn't touch it again when I realized how geared towards girls it was. We just didn't in those days did we? Boys just had a natural mental block not to bother looking at girls comics. Admittedly in hindsight we did miss some great strips!

However I don't think we're any worse off for not reading the articles on pop music and dresses, John. :)

I bought the first issue.....felt very self-conscious though! Just wish I'd kept it.....