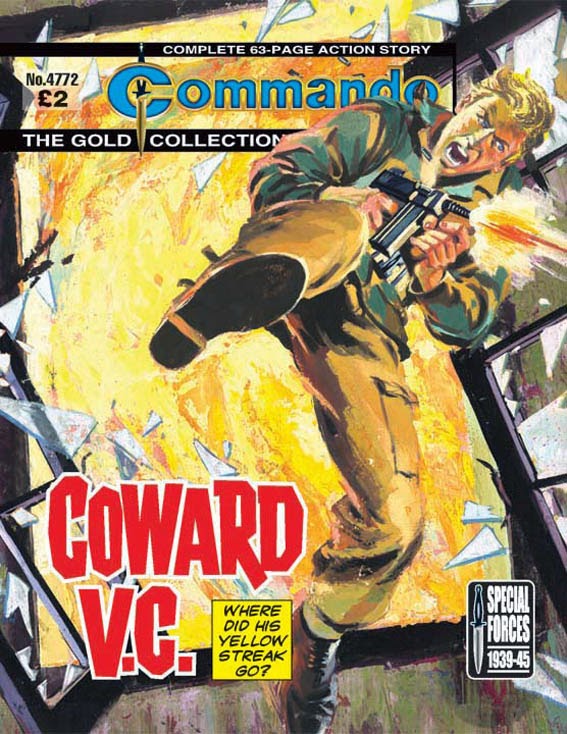 There's four issues of Commando comics in the shops now, which were published on 1st January. This time they're part of the 'Special Request' series, which means all four are classics from the archives, but the usual pattern of two new/two reprint will return with the next batch.

My thanks to DC Thomson for sending over the press release and cover images.

Commando No 4771 – Nerves Of Steel
Mosquito pilot Bob Ross had been sent to kill a Nazi general. Already the mission had been cursed with bad luck and, of the three planes that had started out, only his Mossie was left. So it was all up to Bob and his French navigator, Paul Mallon.
From the mad, hate-filled look in the Frenchman’s eyes, though, Bob reckoned that the Germans weren’t the only enemy he would have to cope with…

Introduction
With echoes of the Amiens Jail raid, this book seems tailor-made for an air story with plenty of aerial action filling its pages. To a certain extent, that’s true, but artist Collado is called on to illustrate an attempted murder mystery as well. Actually make that a potential attempted murder as Monty has managed to introduce a certain amount of doubt about that.
If Ian Kennedy’s bold orange-skied cover points directly to an air story and the plot to something else, you could be forgiven for thinking the tale might be confused. But there is no split personality here, the whole flows together and pulls you along like a merlin engine.
Well chosen, Sam Leigh.

Colonel Bostock read the top secret message carefully, then, unbelievingly, he read it again. There was no doubt about it — British intelligence Headquarters wanted him to send him a coward. Why? What good to anyone was a coward in a war?
The answer lies in this fantastic story…

War is a messy business — nasty, brutal and ruthless. History shows that military authorities can be as cold-blooded in the treatment of their own soldiers as those of the enemy — like “Operation Mincemeat”. Such is the thrust of the story concocted for you by Goodall; the tale of a man offered up by his own side as a sacrifice. Needless to say, the operation doesn’t go as planned. Indeed it ends up turned on its head because, after all, this is Commando.
One of Gordon Livingstone’s early books, his inside artwork shows his characteristic energy and accuracy…without any economy.
Which brings us to that cover. Fantastic doesn’t do it justice, there’s so much life and action packed into that 7 by 5-inch area. There’s a hint of possible death too so you’d better get reading to find out what happens. 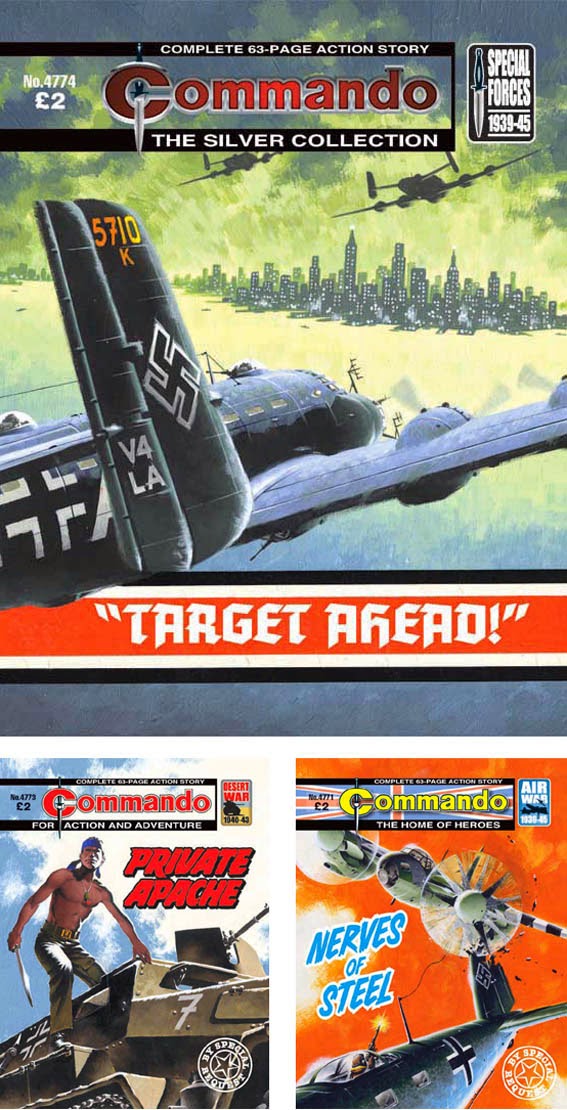 When it comes to living and fighting in the desert, the Apache have no equal, and Juan Running Deer was a true Apache.
His eagerness to be a warrior like his ancestors led him to North Africa with the British Army in 1942.
Soon the battle-ground echoed his tribe’s ancient war cry, “Da’itsaah!” — “Unto Death!”

When Commando fan John Warburton nominated this book for a fresh viewing, I don’t think he realised how unusual it was. The artist responsible for the inside work, Jim Watson, only drew half-a-dozen issues for us — no surprise, really, as he was much in demand for the likes of Warlord and Battle. He does bring an individual style to the art, but it’s still very much in the Commando style…and very good.
Author Ken Gentry hailed from South Africa and loved his desert war stories, but there he has excelled himself for invention, bring a Native American thousands of miles to join the action.
The cover is from the inimitable Ian Kennedy — one of his earliest efforts for Commando — and is accomplished as the ones he does today.
With all that going on, little wonder it’s such a good story.

The big four-engined bombers droned their way north over the sea, a few miles out from the Eastern coast of the USA. They kept tight formation, flying fast and low. If anyone had seen them, they would have been mistaken for American planes on a training flight…except that there was no one to see them. And this was deliberate, for they were Junkers 290s of the Luftwaffe — and their target was New York.

When originally published, this story was called “Bomb New York!”
However, even though it appeared long beforehand, we don’t want to appear insensitive to the events of September 11, 2001, so the book has been re-named “Target Ahead!”
Going purely by the visuals, we immediately know what the tale is going to be about, thanks to Ian Kennedy’s superb realisation of Manhattan — and those Luftwaffe aircraft hurtling towards the unmistakable metropolis with deadly intent. There was that original title, too, which you can see below. After consulting our records, the tale came to us via top scriptwriter Alan Hebden’s typewriter bearing the slightly more poetic legend, “The Night They Bombed Manhattan”.
Presumably at the time Ian’s cover was deemed too action-packed to fit all those words on!