This week marks the 50th anniversary of DC Thomson's Sparky weekly, which enjoyed a respectable 12 year run from January 1965 to July 1977 before merging with The Topper. I'm just going to focus on its very early days in this post.

Some of Sparky's most fondly remembered strips didn't arrive until a few years into its run. Fan favourites such as I-Spy, The Sparky People, L Cars, Puss 'n' Boots, and Spoofer McGraw were relatively late arrivals that were part of the comic's gradual evolution into a different type of comic. The Sparky that most fans remember was a wilder, wittier, comic, but when it started it was a much more conservative title and seemed to be pitched at a slightly younger readership than its sister papers Dandy and Beano. 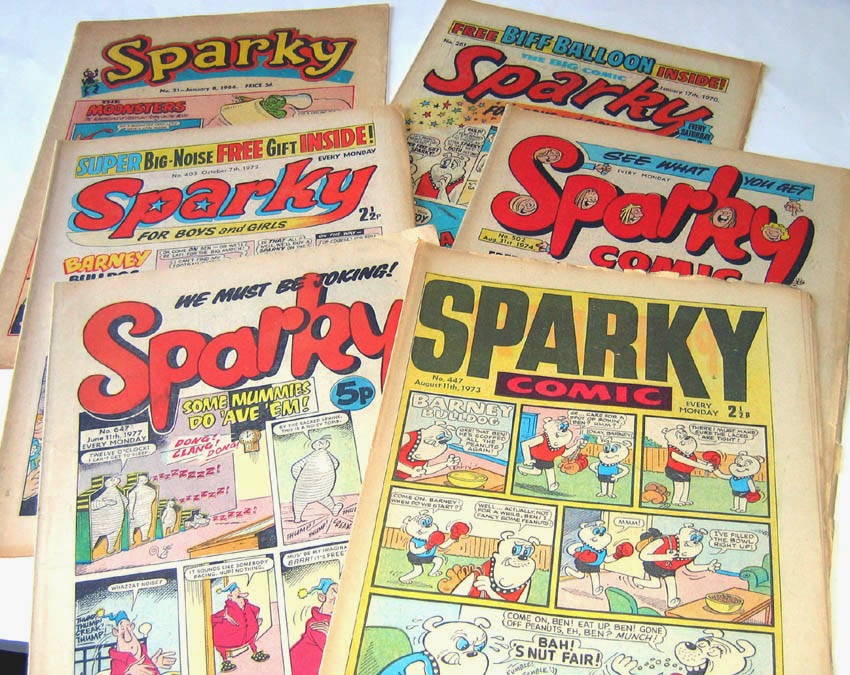 My copy of Sparky No.1, purchased 50 years ago, was thrown away back then, and I've misplaced the earliest issue in my collection (No.6) so these are a few pages from 1966 and 1967.

Like Bunty, the title of the comic Sparky was also the cover star. Quite a controversial one in this case. Any article on the early days of Sparky comic can't avoid the fact that Sparky himself was an outdated racist caricature, with his distorted features and grass skirt. Indeed he was basically a revival of Sooty Snowball, an old 1930s character from the short-lived Magic Comic. (http://www.britishcomics.com/Magic/) 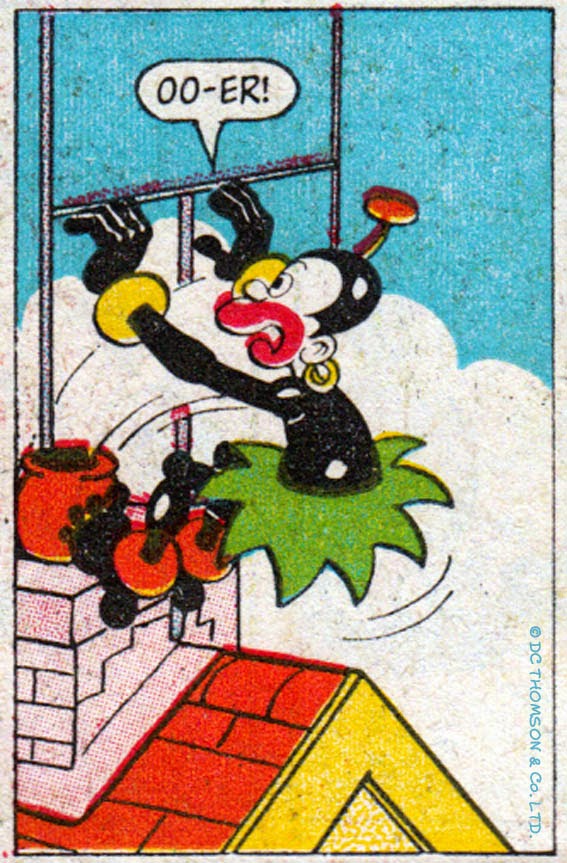 If I remember correctly (and I'm thinking back 50 years here so I could be mistaken), the first strip had Sparky arrive via a flying saucer, suggesting that he was an alien, rather than an immigrant. (Can anyone verify that? Have I imagined it?) However, the physical similarity to black caricatures and to the old Sooty Snowball character would dispute that. I think what made the Sparky strips even more alarming was that although Sparky himself was a distorted caricature, most of the white characters in the strip did not have exaggerated features. Also, why was Sparky dressed that way when he lived in 1960s suburban Britain? 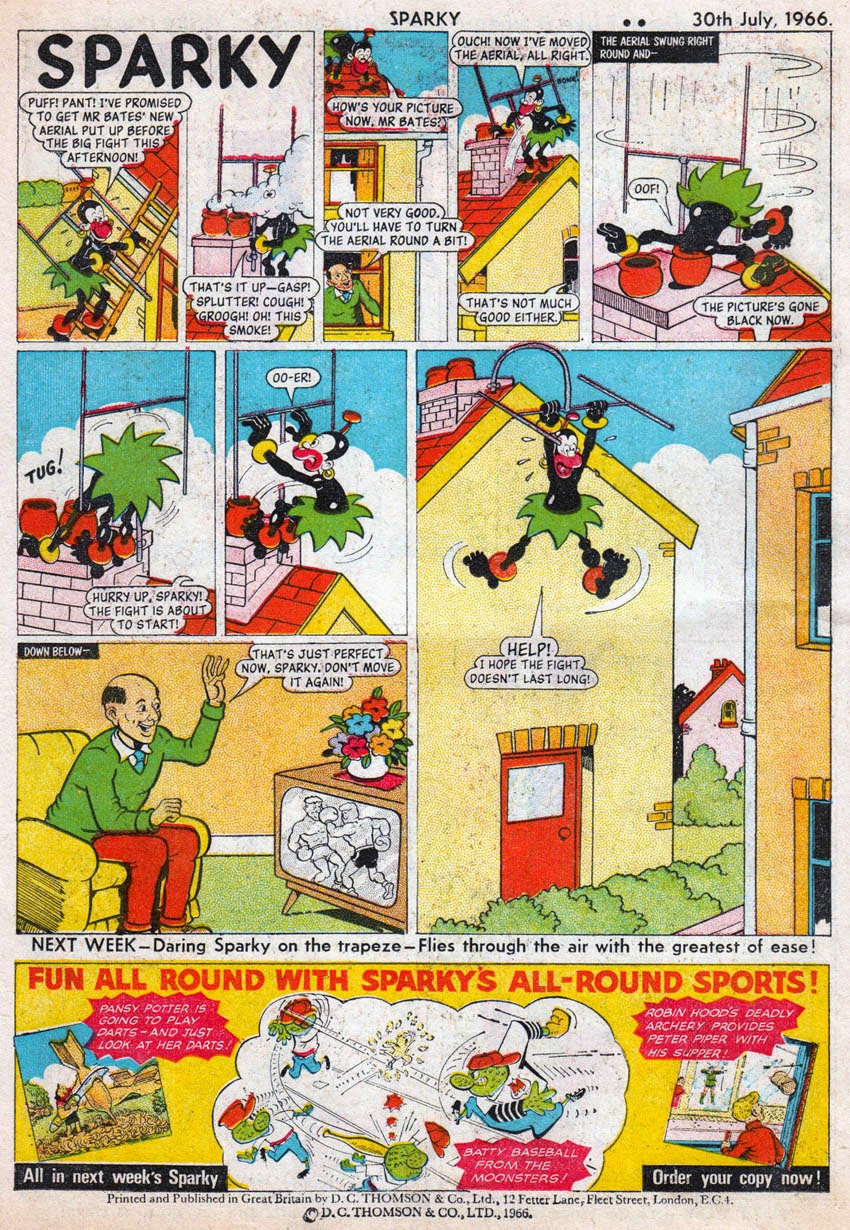 Sparky occupied the cover strip for a while, then was shunted to the back page to give the presumably more popular Moonsters the cover position. A far better strip in my opinion, with nice work by Bill Ritchie. 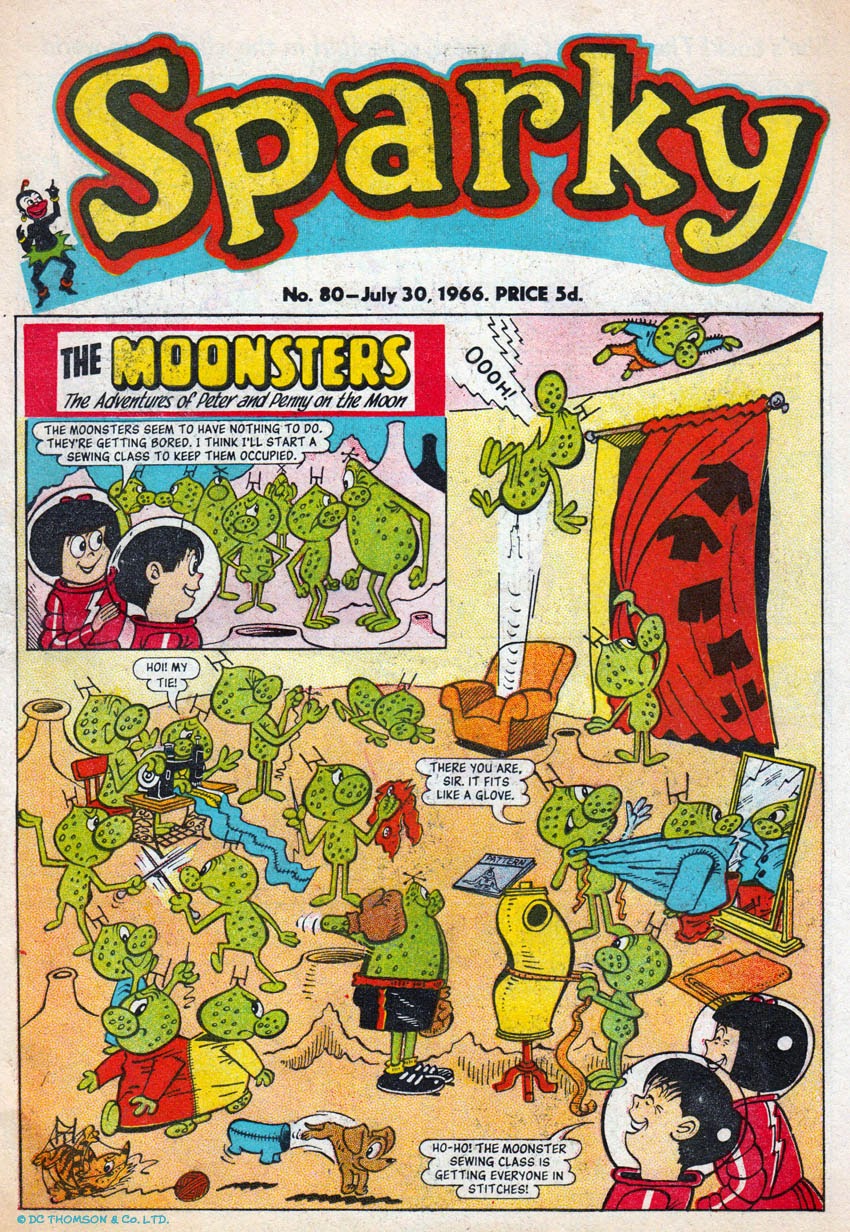 It didn't last unfortunately. In 1967 Sparky was back on the cover again, and would remain so at least until towards the end of 1968. Thankfully by 1969 he was gone, surviving only as a head shot on the jokes page, and eventually phased out altogether. 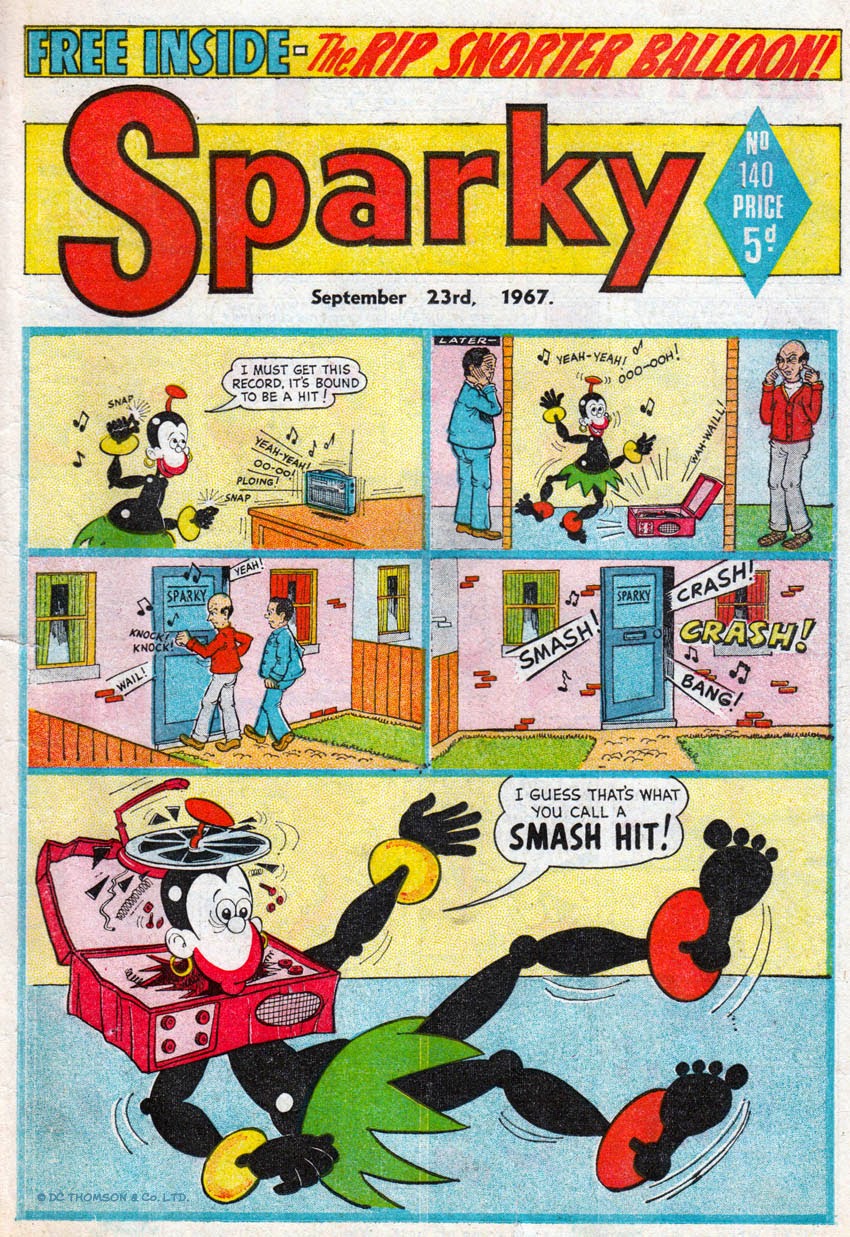 As I said earlier, the content of the early years of Sparky was a little younger in tone than DC Thomson's other humour comics. Strips such as Cuckoo In The Clock for example, seemed to have a tone somewhere between Bimbo comic and The Beano... 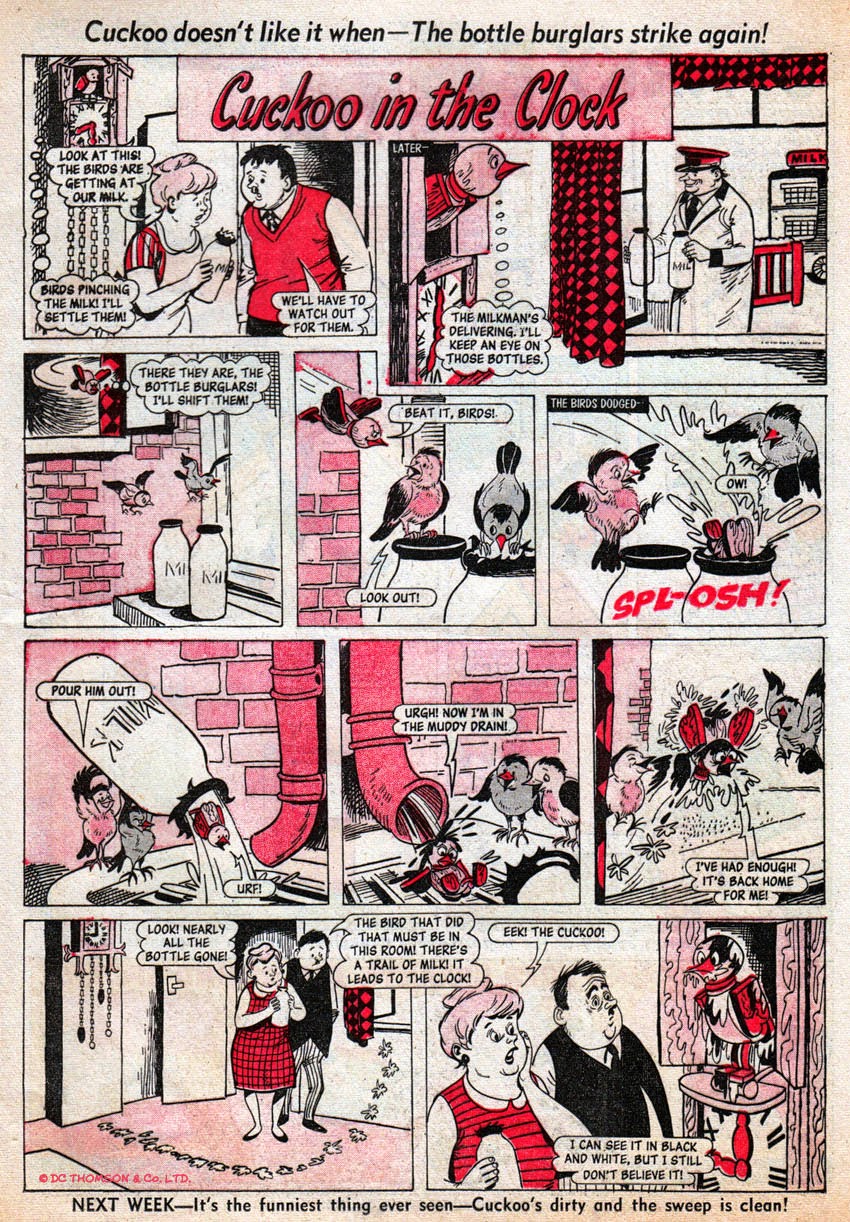 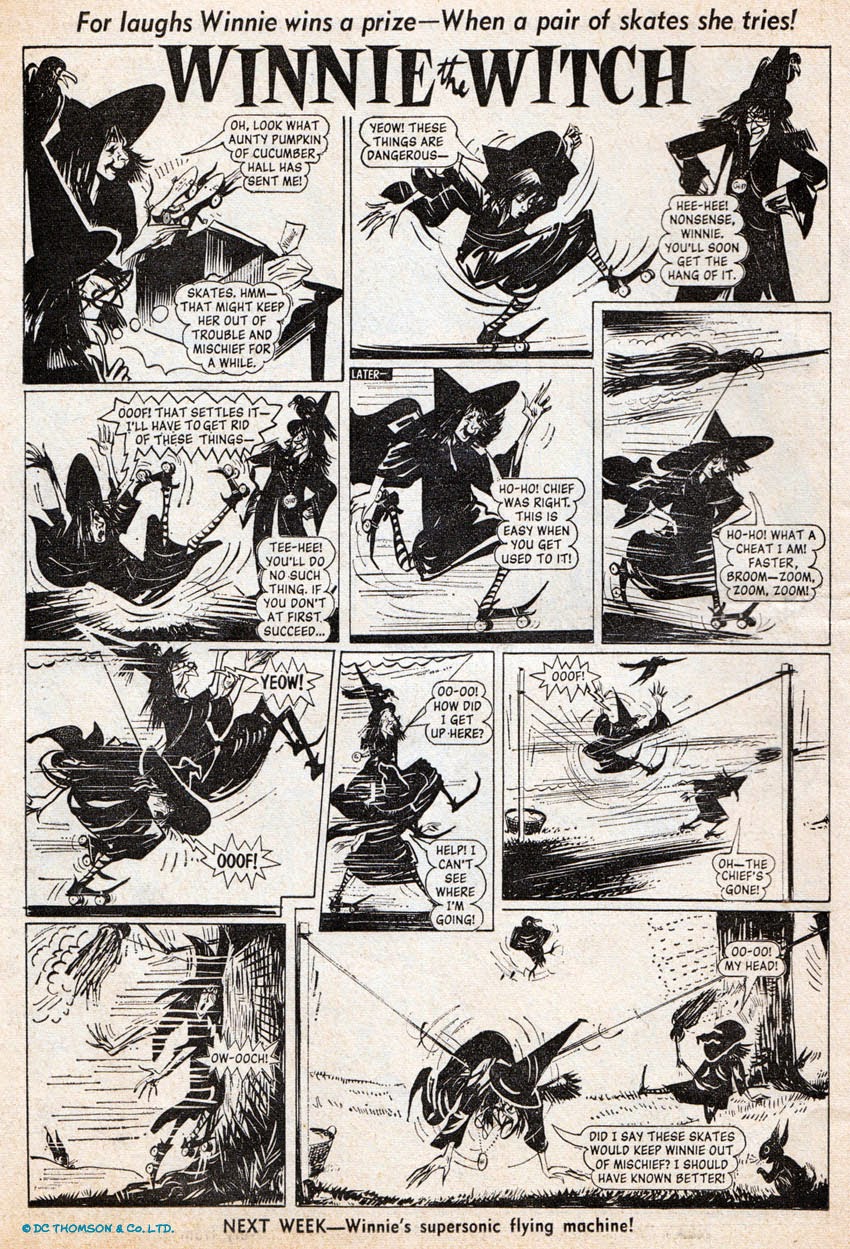 Dreamy Dave and Dozy Dora was another whimsical strip that had almost a fairy tale aspect to it... 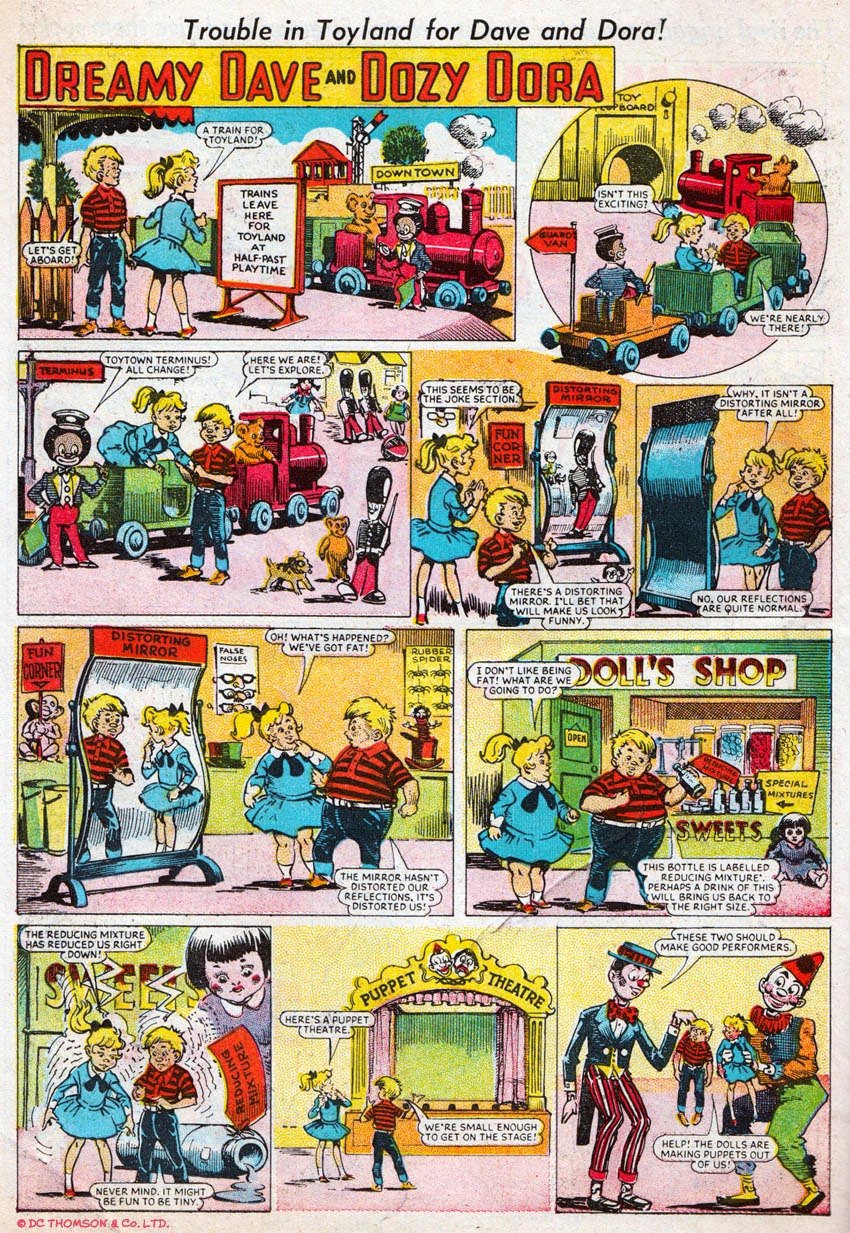 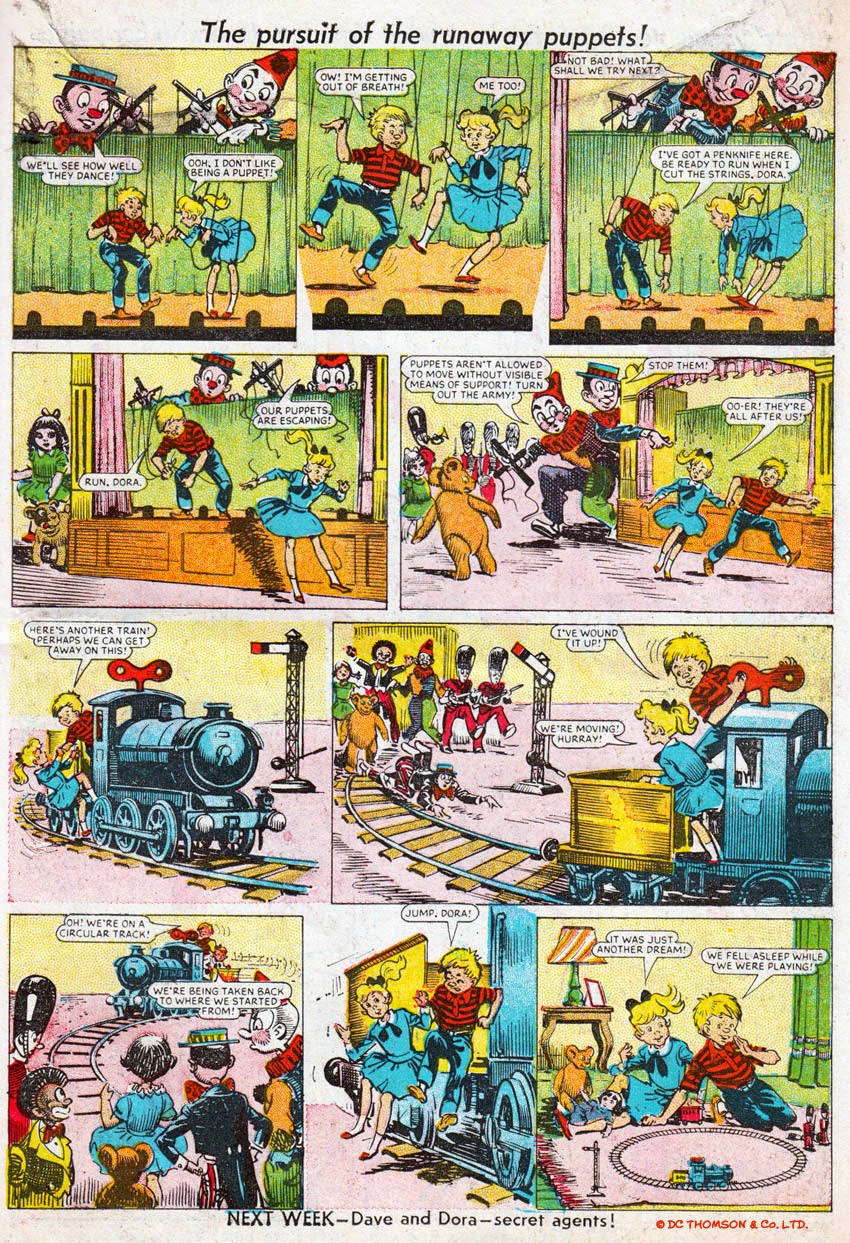 However, Sparky also revived some classic 1930s DC Thomson characters such as Peter Piper, Hungry Horace, Pansy Potter, and Keyhole Kate. These would prove to be more enduring than any Cuckoo In The Clock and would become the mainstays of the comic... 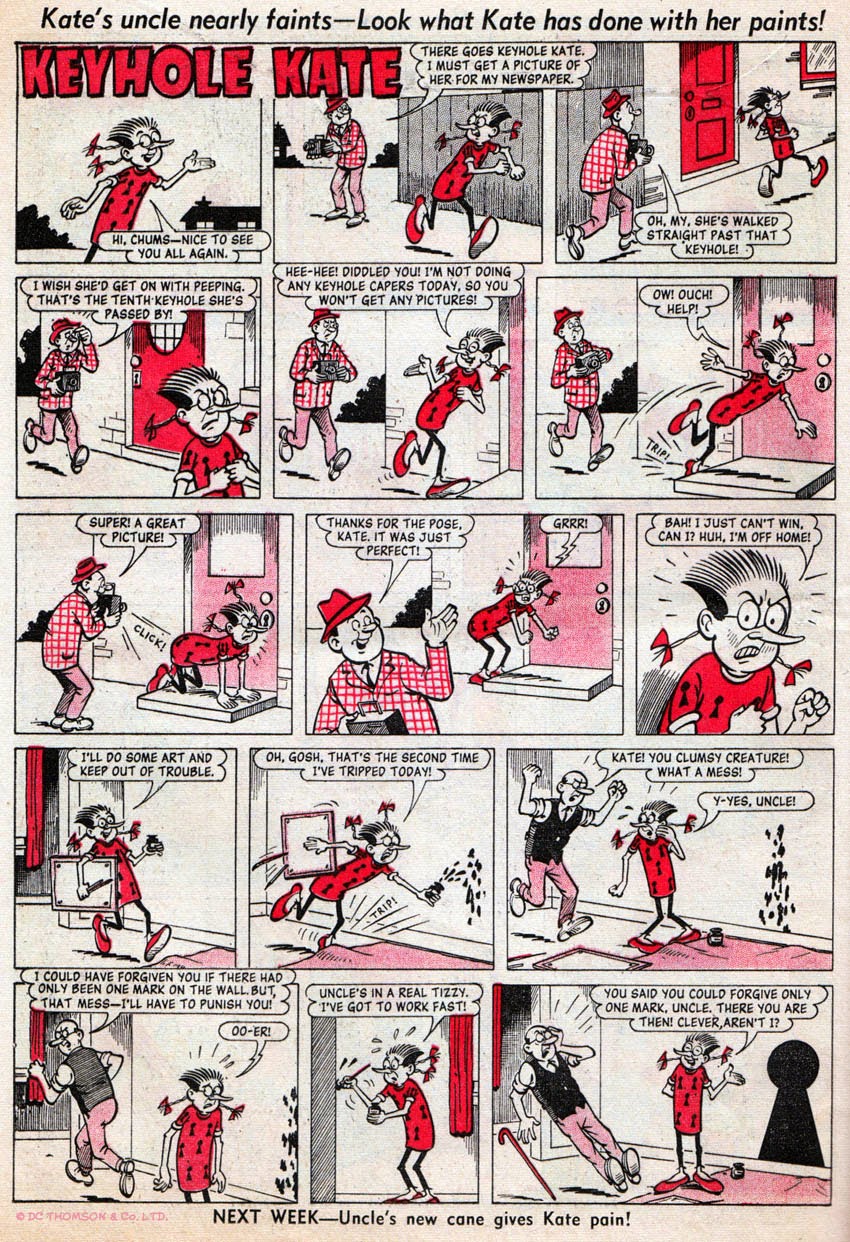 Sparky also featured a few adventure strips, with the robot Big Klanky being one of its best remembered characters... 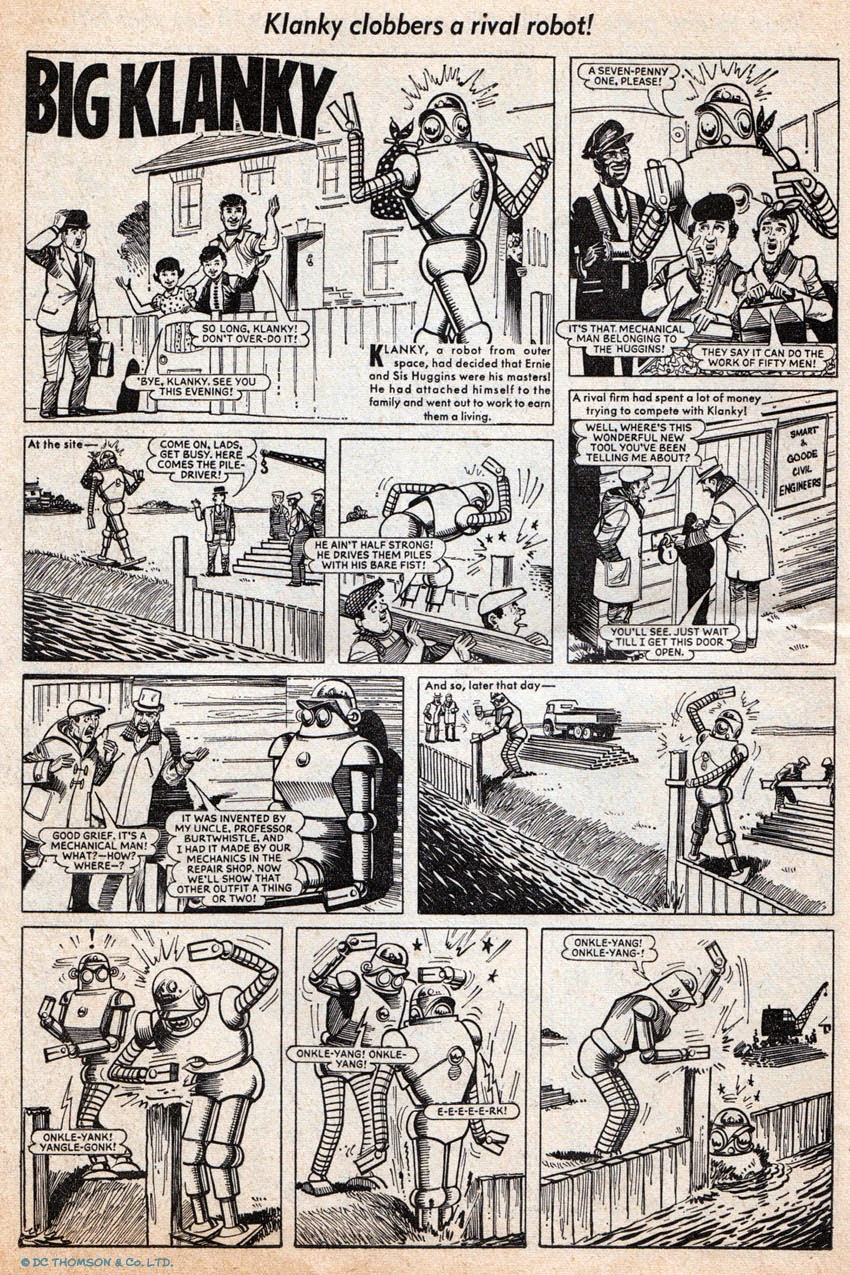 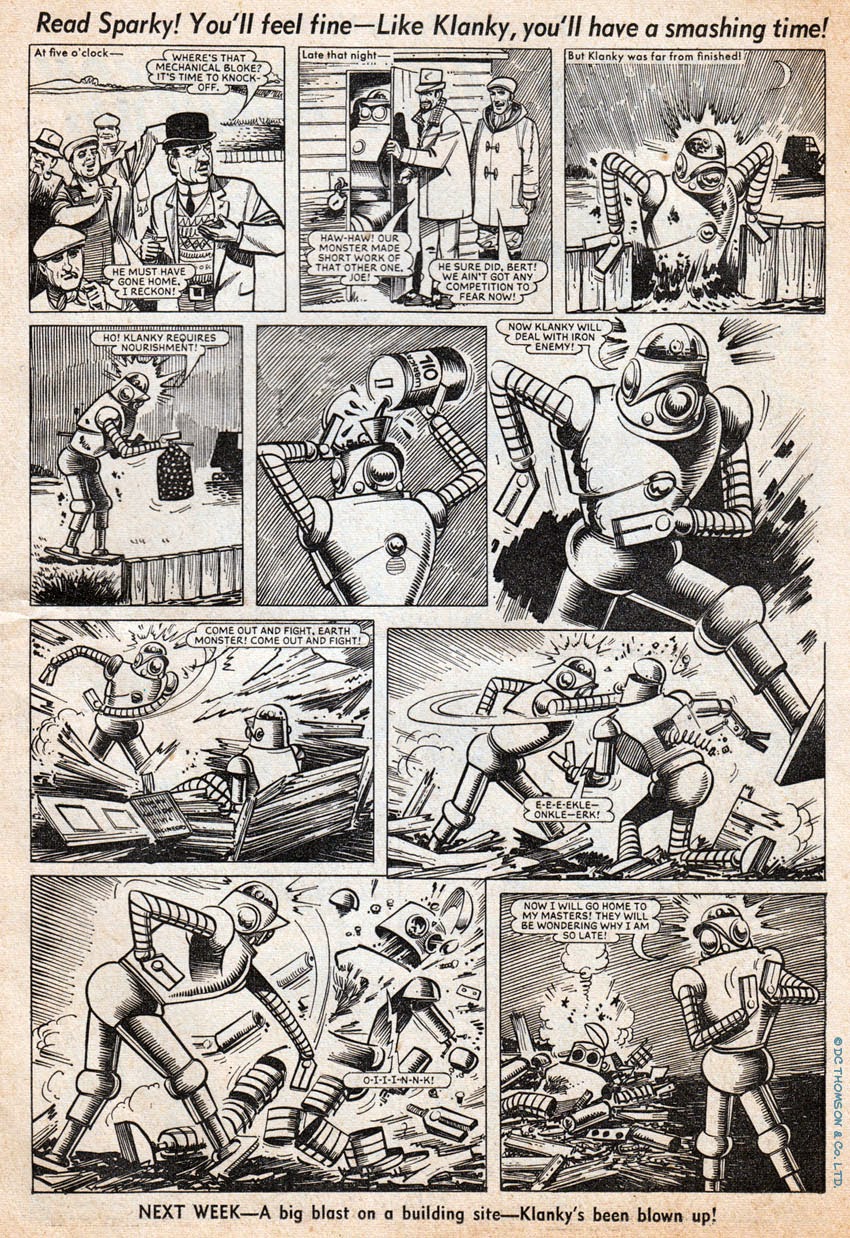 I've only barely touched upon Sparky's long history of course, but if you want to find out more, Alan Smith did a very thorough research of the comic which he posted over on the Crikey! Forum a few years ago. Click here:
http://crikey.forumotion.com/t148-the-sparky-file
Posted by Lew Stringer at 14:10

Yeah, as a little kid, I thought Sparky was an alien - until my mom said one day that she thought he was meant to be a black boy, and it wasn't very nice. A strip I doubt will ever be reprinted is Dirty Dick's 2-page first appearance, filled with comments like "He looks like a darky!". I've got a photocopy at the museum somewhere, I'll try and dig it out.

Anon, there are examples of I-Spy and other later Sparky strips elsewhere on my blog but as I said I just wanted to focus on the early years for the comic's 50 anniversary week.

Steve, I have that issue with the first Dirty Dick strip. I showed it on my blog several years ago:
<a href="http://lewstringer.blogspot.co.uk/2010/04/memories-of-eric-roberts.html</a>

You're right. It certainly wouldn't be reprinted in the comics these days.

Sorry, did the link wrong. Here it is:
http://lewstringer.blogspot.co.uk/2010/04/memories-of-eric-roberts.html

I have the first Sparky Book, dated 1967, and one of the strips in that was Dolly Dimple, who according to that British Comics site you linked to is another character from Magic Comic.

Thanks James. I wonder if Thomsons ever considered reviving 'Magic' as a title for it before they settled on using 'Sparky'?

Love the middle run of Sparky but I've only a few of these early issues. However I have a full set of annuals and the first two reflect the early run. The art is seems to have a almost old fashioned charm to it but with a very surreal feel on several strips.

Yes, the first Sparky Annual I had was the one dated 1970, which due to annuals being produced a year in advance meant it contained the pre-1969 style strips. I still liked it though, mainly because it was a bit strange.

I'm just reading the first 'Sparky' strip from no. 1 and I don't see any flying saucer - he's on a butcher's bike delivering meat, uses a sail to get up a hill, then crashes into a lamppost. Dogs eat the meat but then Sparky uses the dogs to pull the bike and all is well...

There was a comic called 'Magic' that came out in about 1977 - I remember my sister used to read it.

Another cracking post, Lew. Thanks for bringing back forgotten memories for me!

Thanks for the info, Simon. I must have imagined the flying saucer, or read the description elsewhere from someone else mis-remembering.

Didn't Klanky the Robot survive the absorbtion with other comics? I remember him well after this date.

I think Klanky returned to Sparky in the 1970s. He may have turned up somewhere else afterwards but I don't recall it. Some Klanky strips were reprinted in Classics from the Comics I think.

The Sparky character `didn't` arrive by flying sauser Lew! you might be thinking of Penny & Peter's arrival on the Moon in "Moonsters" strip.

In Sparky No1 he was on the back cover with `Bamboo Town` style dialogue "Dem Sausages am Damaged" not edifying today. Thankfully the strip gave `Sparky` regular English dialogue after that. Can I mention a 1966-67 personal favourite! "Willy the Woeful Wizard! Artwork gorgeous and stories full of surrealism! Alan Smith.

Thanks for confirming that Alan. You're right, I must have been thinking of The Moonsters.

I don't think I saw Willy the Woeful Wizard. I'd probably given up Sparky to switch loyalties to Smash! by then. Thanks for your comment and useful info!

Thanks Alan! It's the 1969 series I'm most familiar with as that's when I started buying the comic regularly. I only have a few of them now though.

One of the highlights for me of the comics early days was the 1966-67 strip "Willie the Woeful Wizard! A surreal delight graced with-what is for me- the finest artwork I have seen in many a day on any comic.

He rings a bell, although I don't have any issues with him in now. Sparky definitely had its own identity with some very appealing stories. I can see why you collect it!

Lovely to see these strips again. I'm pretty sure that Winnie the Witch was not in the earliest issues but part of what I remember as the first revamp - and possibly (although I'm less certain) that Peter Piper was part of that too, as was Fireman Fred.

For years I had happy memories of the David Copperfield strip which appeared at some point in Sparky - don't know how many weeks it ran for, but it was quite a while - and remembered it as being by Dudley D. Watkins. I once had the opportunity to ask Sandy Calder about this and he couldn't corroborate it. Many, many years later I was in Colindale on another task and couldn't resist summoning up the relevant years of Sparky. I had to look at them in view of the main desk - presumably they've had trouble with comic nuts before, and indeed the odd page had been removed - and to my surprise it most definitely was not Watkins. Not a bad artist, but light years away from the subtlety of Dudley D.

David Copperfield I think was drawn by Paddy Brennan. It was a re-print from `Bunty` comic. Though it ran for 20 weeks, it only covered a small early section of the novel. Davids adult life was missed out. Peter Piper arrived in issue No3 artist unknown (One source said Mike Lacey drew early `Peter` but that's not Lacey's artwork) `Winnie the Witch` appeared in issue 22 as part of a mini revamp -(without gifts)