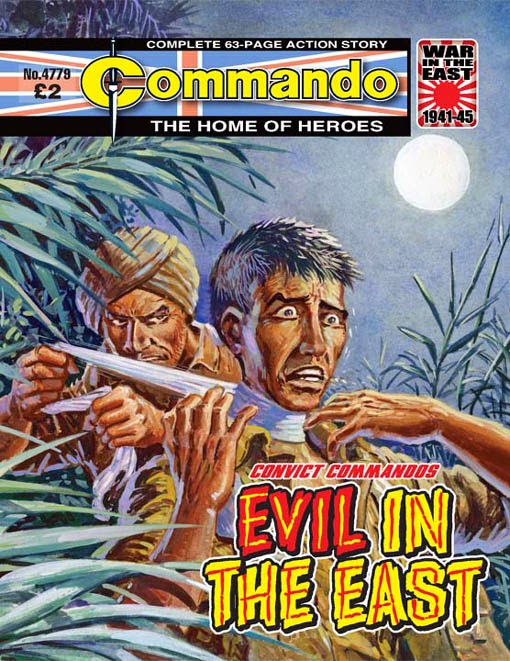 This blog is all about the past, present and future of British comics so let's take a trip to the future! Well, two days from now anyway, when these issues of Commando go on sale on Thursday 29th January. My thanks to DC Thomson for sending the images and details...

Commando No 4779 – Evil In The East
The jungle can be a hostile place, besides the strength-sapping heat and humidity, dangerous animals and plants abound.
This counts double if you’re a confirmed coward, born and raised in London, separated from your comrades and being pursued by a deadly assassin.
That was the position that “Jelly” Jakes of the Convict Commandos found himself in. let’s be honest, he had every right to be terrified.

Commando No 4780 – Fighting Fury
He was only a skinny little guy, about five feet nothing at all…but, by jiminy, any Nazis who ran up against Private Sam Small were out of luck.
While his ammo lasted, Sam shot them; then with his empty gun he clubbed them; when it was in splinters, he started in with his bare hands!
Only one man knew what drove that little guy to such a fighting fury — only one found out the terrible secret of Sam Small — and here he tells Sam’s amazing story.

Hiding behind Aldoma’s magnificent all-action cover is one of the most idiosyncratic Commando stories you’ll ever read. Told in the first person, and an American first person at that, it chronicles the acts of a man with a death wish over a very short period of time. These are traits not normally associated with Commando and, indeed, very difficult to get right. But right they are here, very right indeed.
Sit back, suspend your disbelief and enjoy this roller-coaster ride in the thick of the action in the company of ace reporter Jim Dawson.
By the way, we had noticed Jim’s similarity to Robert Mitchum.

Commando No 4781 – D-Day Dodgers
In 1944 someone named the servicemen in Italy the D-Day Dodgers; as though somehow the war they were fighting was a cushy number compared to the battles in France. Outraged, one national newspaper decided to expose these loafers once and for all.
That’s how reporter Perry Potter and his photographer Chalky White came to be standing on a freezing airfield in “sunny” Italy. The weather was just the first of the eye-openers the pair was going to see.

Commando No 4782 – Tempest Fury
In the summer of 1944, a frightening new weapon was unleashed against the war-weary British — the dreaded V1 flying bomb.
Sergeant-Pilot Jamie Collins had a personal score to settle with these robots of death. So when his squadron-leader grounded him after yet another display of reckless flying, it didn’t stop him.
Where there were V1s, that’s where Jamie wanted to be, at the controls of his hard-hitting tempest fighter. Orders or no orders…

Scott the Deputy Ed is on holiday so I get to write the intro to this story from our 25-year-old collection. Growing up with Commando in the 60s there were no creator credits on the books but there was one inside artist whose style stood out. Very individual, angular, with strong, strong blacks and peppered with skilfully-employed Zip-A-Tone — the sheets of dots which provide shading. To me the style looked just right for Commando. His name? Gordon Livingstone.
I still think that, which is why you’re getting another chance (or a first chance) to read Ken Gentry’s crackling air/ground story and marvel at the magnificent economy of composition that is Ian Kennedy’s cover — there’s nothing there that doesn’t have to be.
This really is a mini-masterpiece. Should I let Scott read it?