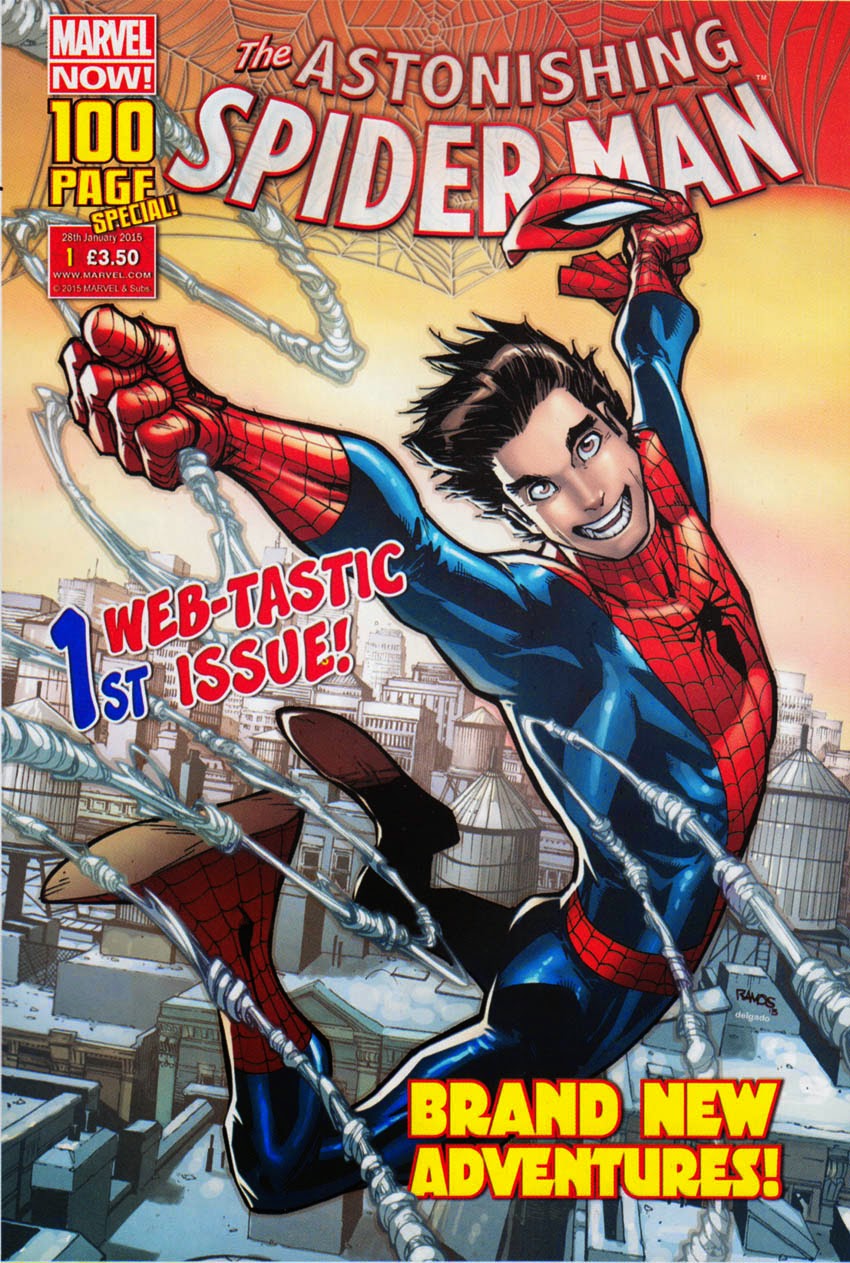 Panini UK's fortnightly comic The Astonishing Spider-Man gets another relaunch with a new No.1 this Thursday, 15th January.

The comic's previous run ends with issue 33 (on sale now) which concludes the 'Superior Spider-Man' story arc of Doctor Octopus inhabiting the mind of Peter Parker. A controversial story, but one which I really liked. Personally I've never been a huge fan of Spider-Man comics. I liked Steve Ditko's run in the sixties, and the issues that John Romita inked himself in 1972, but otherwise I've been fairly indifferent to the strips. (Although I've still followed it on and off over the decades.) However, since Dan Slott took over the writing duties several years ago he's really turned the Spider-Man strip around, providing good solid escapist fun and various twists and turns. Having Doc Ock as an arrogant Spider-Man provided a lot of laughs.

With the new Astonishing Spider-Man No.1, Peter Parker has regained control of his own mind and body and the status quo is restored. And in Parker's life that means various ups and downs, including dealing with people who Doc Ock had cheesed off (as most people didn't know Parker had been 'taken over').

Along with other material, The Astonishing Spider-Man No.1 reprints the American Marvel comic The Amazing Spider-Man No.1 from June 2014, which was the top selling comic of the year (see news item on Down The Tubes). Story by Dan Slott, artwork by Humberto Ramos. 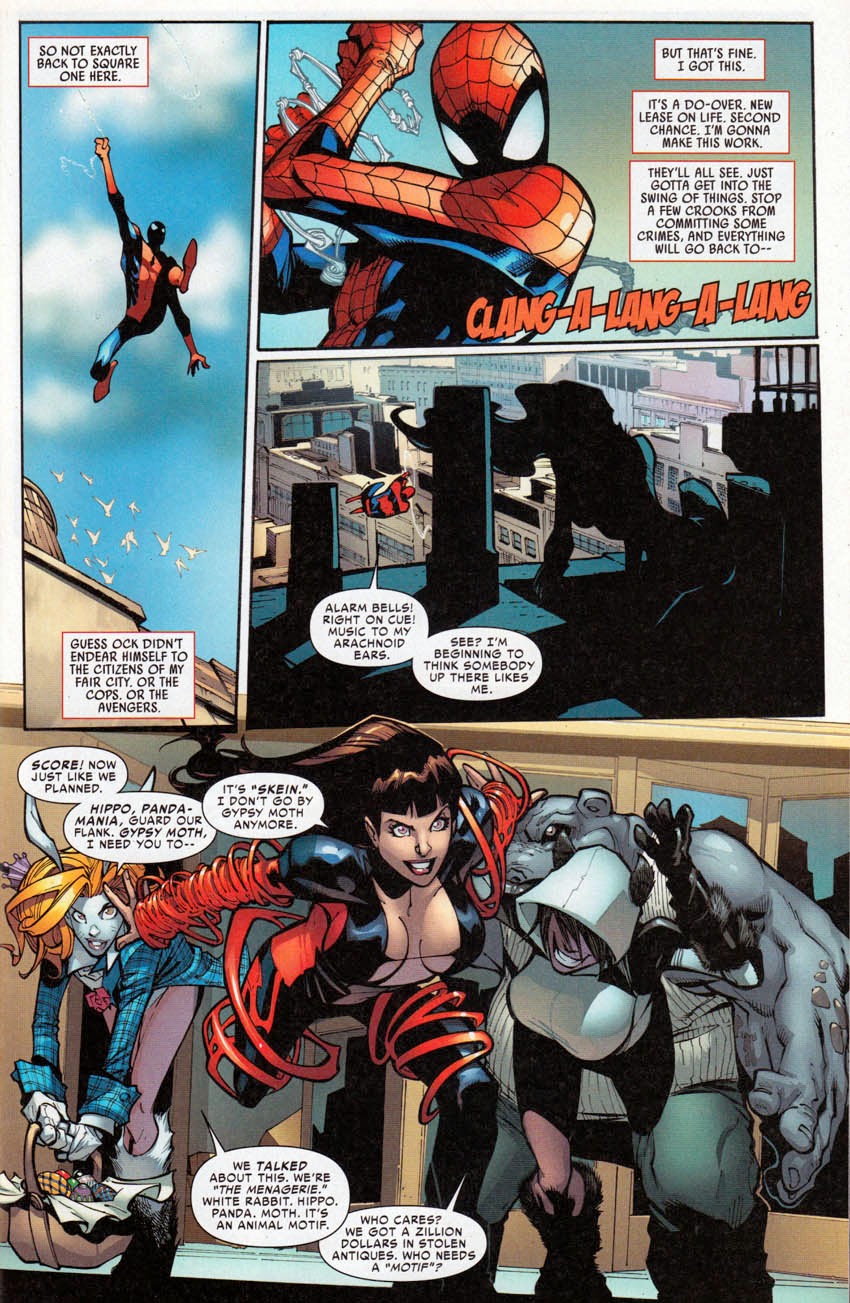 This is the fifth renumbering of The Astonishing Spider-Man, a comic which dates back to 1995. Prior to that, Marvel UK had been publishing Spider-Man under various titles since Spider-Man Comics Weekly in 1973. And before that, reprints of Spider-Man's early adventures had appeared in Pow! (1967/68), Smash! and Pow! (1968) and TV21 (1970/71). Selected Spider-Man reprints also appeared randomly in various Alan Class comics in the 1960s.

Good grief, not another relaunch. And in 1976 when Spider-Man Comics Weekly changed its' name and its' entire format thereby becoming A TOTALLY NEW COMIC it just carried on with the same numbering - different times.

I suspect retailers will cotton on eventually that it's just a way to entice them to order more copies but while it's working publishers will keep doing it I suppose.

I suspect this will be the last Marvel UK "relaunch" for a while (Maybe Wolverine & Deadpool will late this year, early next with "events" currently happening in the US) - I think Marvel Now was a good move to renumber them all especially with the sheer amount of Marvel movies etc and new readers to entice - when it's part of an ongoing story, I can see how "Issue 134" can be offputting to kids today. That said the old traditionalist in me does miss it, and it has been a very short time since the last Astonishing #1, but it's all part of the story so I can understand it.

It is a good way of getting readers on board even if it isn't really the first issue. Funnily enough I just subscribed before seeing your article, Lew.

I actually found the Superior Spider-Man arc better than the current stories but I hope you'll enjoy it Sid. It's still fun stuff.

It's interesting to know what the actual issue number would be, Chris. If we add all the previous ones to it, such as Exploits of Spider-Man and the weekly ones I presume it'd come to about 800 issues or more?

If we are talking purely flagship Spidey there were 666 of the weekly Spider-man comic (in one form or another) - about 50 of Spider-man and the Zoids, 24 of The Complete Spider-Man and 50 of Exploits before Astonishing. Around 1140-ish all in (before even counting different continuities/kid friendlier formats Spectacular Spider-man Adventures and Ultimate Spider-man).

Sorry for boring you, but at least I'm entertaining myself!

The Superior storyline was a good one, I agree.

Chris, that's not boring at all. Very interesting information! Thanks for working that out. I had Spider-Man Comics Weekly/Super Spider-Man for years but threw most of them out. I've only followed the UK ones occasionally since (keeping the ones I had stuff in of course).

I presume Astonishing must sell pretty well considering they publish it fortnightly when all the rest of their line are every 4 weeks.