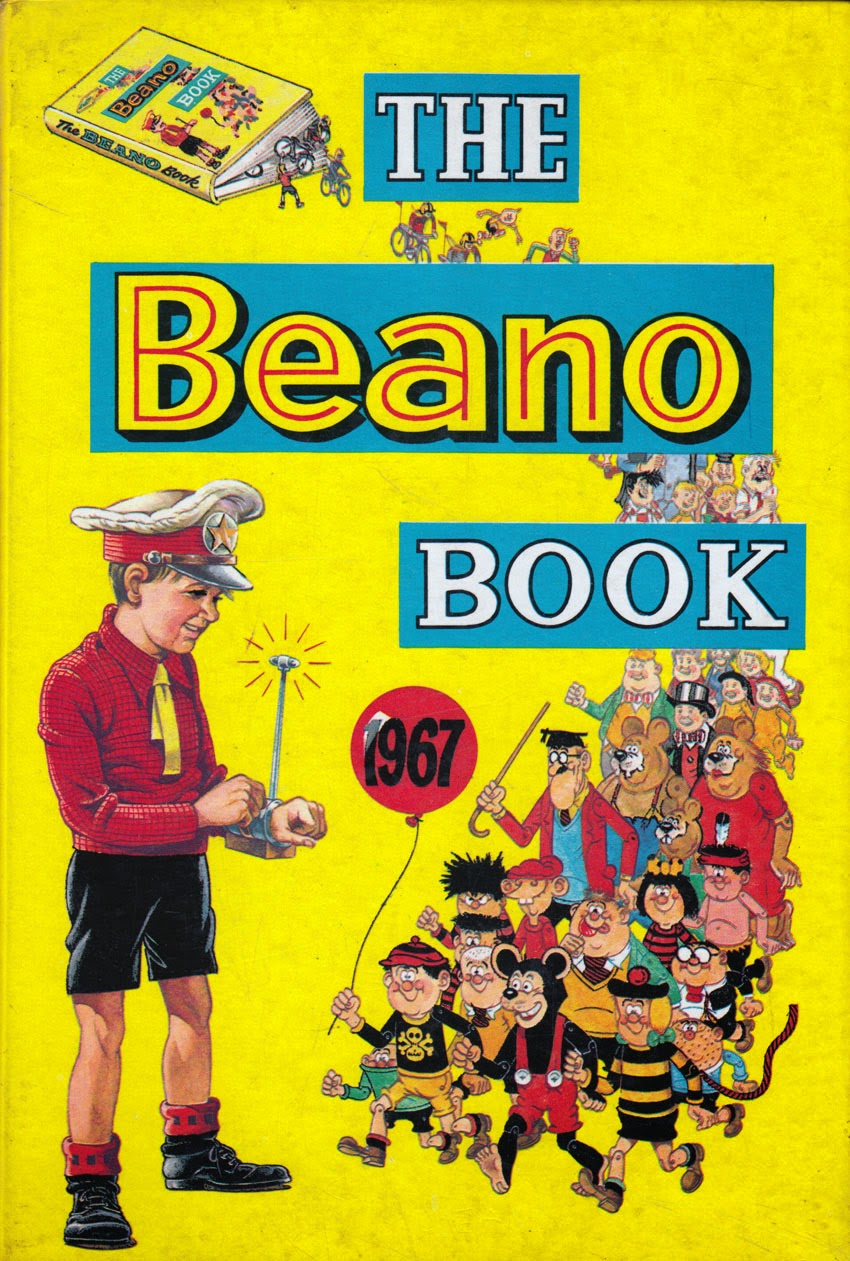 The Beano Book / Annual has had many great covers over the decades but this remains a favourite of mine. I know some of you like it too so I thought I'd show it here today. The Beano Book 1967. An excellent illustration by David Sutherland of General Jumbo and all the Beano characters as his radio-controlled model army.

If that wasn't fascinating enough for a 7 year old (as I was then), it also touches on the infinity effect by showing characters emerging from that very book, and that cover has a similar army emerging from a book... and presumably on into infinity. Quite a mind-blowing concept for a kid to take on board, and I was captivated by it back on Christmas Day 1966 when I had this book.

And I still think it's a great image to this day. Click on it to see it in more detail.
Posted by Lew Stringer at 00:42

Email ThisBlogThis!Share to TwitterShare to FacebookShare to Pinterest
Labels: Dave Sutherland, The Beano

This is a great cover but I always thought Biffo looks a bit too much like a mouse.. Does he have whiskers? My own favorite is the 1969 cover, which I marveled at as a seven-year-old mainly because it was the only 'old' Beano book I owned, and was a treasured possession as a result. The look on the face of the hedgehog on the front cover of the 1965 Beano Book is pretty spectacular too.

Hi Lew .The 19.60's Beano covers were truly lovely. My actual favourite is the earlier "Jonah" one. Offhand ,I think it was 1960 or 1961. Some years ago I collected a run of 1950's and 1960's Beano Annuals on ebay when I was selling comics for about five years. You'll know that they can fetch around £100 pounds ...or maybe more now! That was my favourite Beano period.

This cover is a good example of David Sutherland work. While I wouldn't say every image is the BEST version of the character, they are all very good and the change in style from General Jumbo, to the Tin 'Cast' shows you this range., moving back the line, even Lord Snooty and Friends are drawn more in their own series style (with Sutherlands touch of course), a great range showing you can make characters very much on model with there own styles with the artists only style and tweaks showing though. A nice piece but a great artist who is still doing work when.. he's gotta be 82 this year?

though interesting note, I thought Minnie's colour had been pretty much settled as Red and Black by this time, even though it had seamed to change over the years. (also Toots in Red and Black more then often shown Blue)

I see what you mean about Biffo, Simon, - and yes he does have whiskers on that cover. Perhaps Dave got carried away after drawing the Three Bears with whiskers and thought Biffo had them too.

I think I have that one with the Jonah cover, Paddykool. A great ghosting of Ken Reid's style by David Sutherland. I didn't realise they sold for that amount as I don't keep up with comic values too much. I'll hold onto mine for a while yet I think.

There are a number of colour differences on that cover; Danny's shorts, Fatty's jacket, Plug's cap and so on. Things like that were less set in stone in those days.

Surely the Bash Street Kids colours should've already been set in stone? That story had been in colour ever since Dave Sutherland took over and it got the center pages in 1962, four years before this cover will have been drawn. The only others with fixed colours back then would be front cover star Biffo and back cover star Dennis.

Obviously the colour differences were not considered that important or the cover wouldn't have gone ahead as it was. I can't say it bothered me as a reader. Anyway, if it helps, remember they're Jumbo's models, not the actual characters. Perhaps he's colour blind. :)

Even if that were the case, General Jumbo being color blind I mean, he should know and would surely have asked someone to verify that he got the colors right? If he IS color blind he would also get the colors of his normal army wrong so it doesn't add up. Their must be another explanation, unless he had help with his normal army and not helped either his Beano army?

I think we just have to put it down to one of life's many irrelevant mysteries.

I can't remember which year was my favourite Beano annual, although the Jonah cover was my favourite cover as well. My memory is very fragmented about the favourite annual. I can remember Uncle Windbag; a centaur playing football and the Magic Patch.
BUT one thing I DO remember clearly is my all-time favourite ( clean ) lymerick which was in it, complete with a cartoon, which is: -
A football trainer abroad
Taught the game to a cannibal hoard.
But it's sad to recall
They used him as the ball,
And the pot was the goal - and they SCORED!

Really good to see this cover again, it is also one of my favourite Beano's and indeed annuls of all time and I have great memories of that book and the 1963 annual (I was to young to read thi sat the time but I thin a family friend gave me this book when I was about 7/8 years old 0 but a great cover regardless)from that Christmas time I think I read and re read that annual till it fell apart.

I picked up the (Ken Reid) Jonah 1962 Beano annual about 15 years ago (complete all bar a ripped spin) along with the 1961 annual for £18 for both (both amazing annuals)- I actually saw the 1962 Beano in a shop in Glasgow a few days ago , not great condition but clean and complete for only £10.

I read somewhere that Dave Sutherland had ghosted it but I've just checked Ray Moore's Beano index and the official History of the Beano and both state that it's Ken's work.