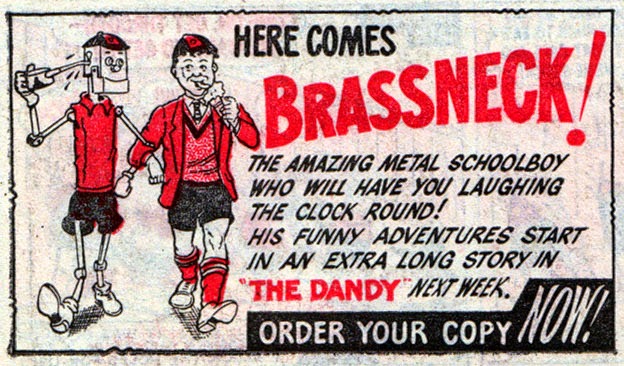 It's been just a few weeks over 50 years since Brassneck made his debut in the pages of The Dandy. The character must have proven popular as he'd return again and again many times over the years. I was certainly a big fan of the strip back in 1964.

The strip was heralded a week earlier, in The Dandy No.1201 (dated November 28th 1964) with a small ad (shown above). DC Thomson's art staff could always design a good ad and this was a great teaser for the series. Brassneck was to replace Joe White and the Seven Dwarfs which had concluded that week.

A week later, in The Dandy No.1202 (dated Dec. 5th 1964, on sale Nov.30th) Brassneck's adventures began! For the first few episodes, Brassneck had three pages, which then reduced to its standard length of two pages. The artist was the excellent Bill Holroyd, who was perfectly suited to this type of comedy adventure story.

Here's that very first episode, with Chuckler Charley Brand (they soon dropped the 'Chuckler') meeting his new metal pal all those years ago. Click on each page to see it larger. 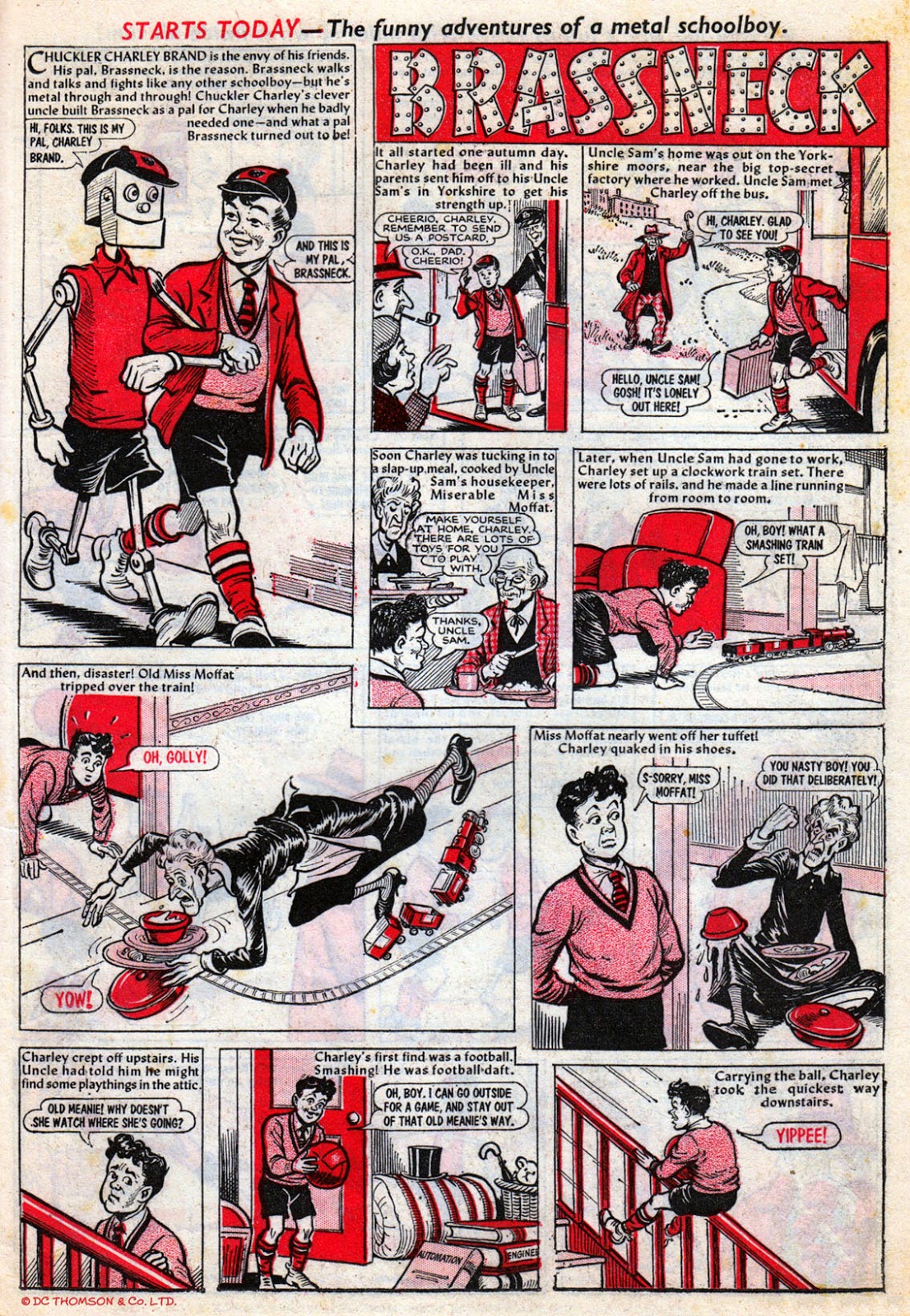 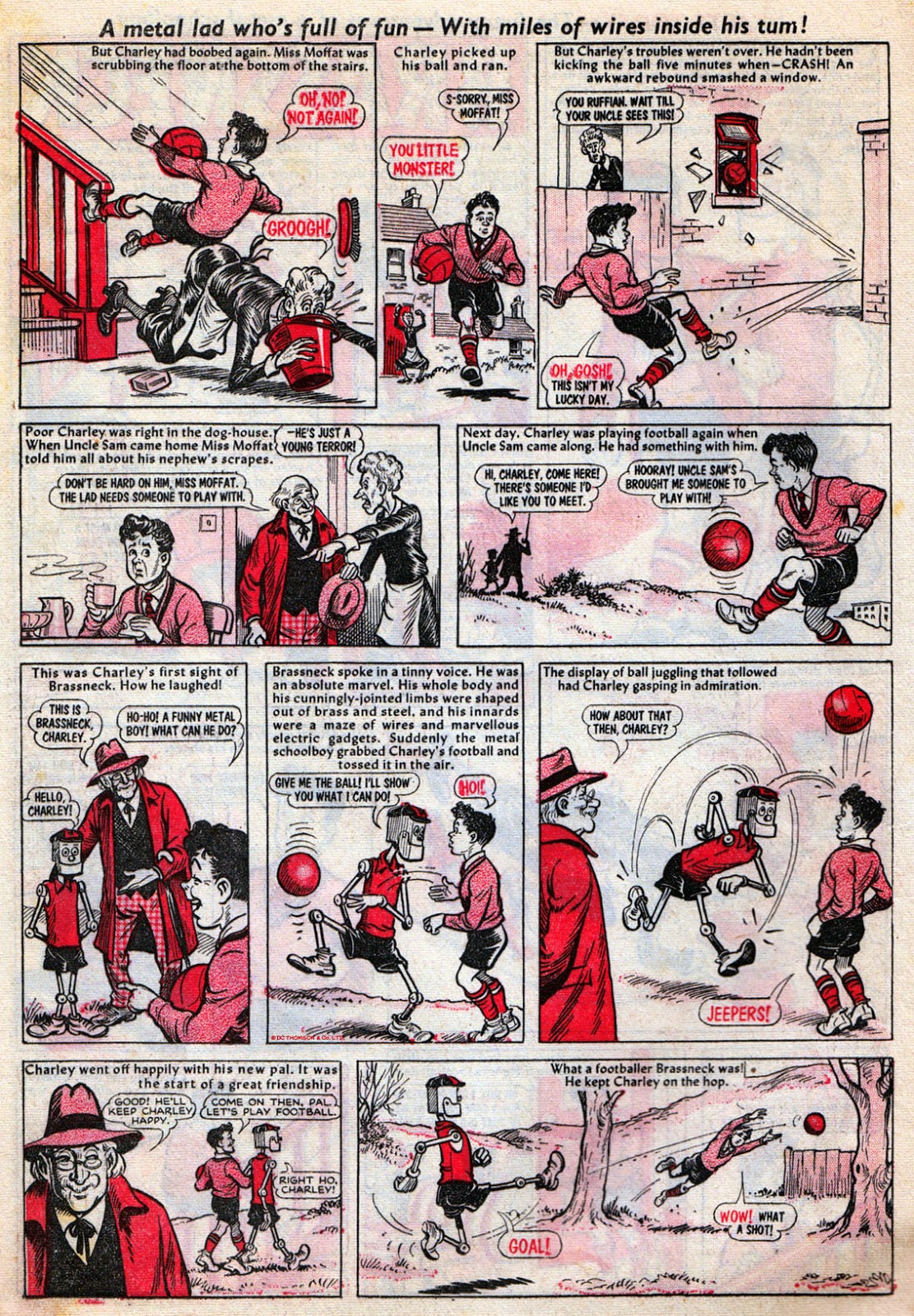 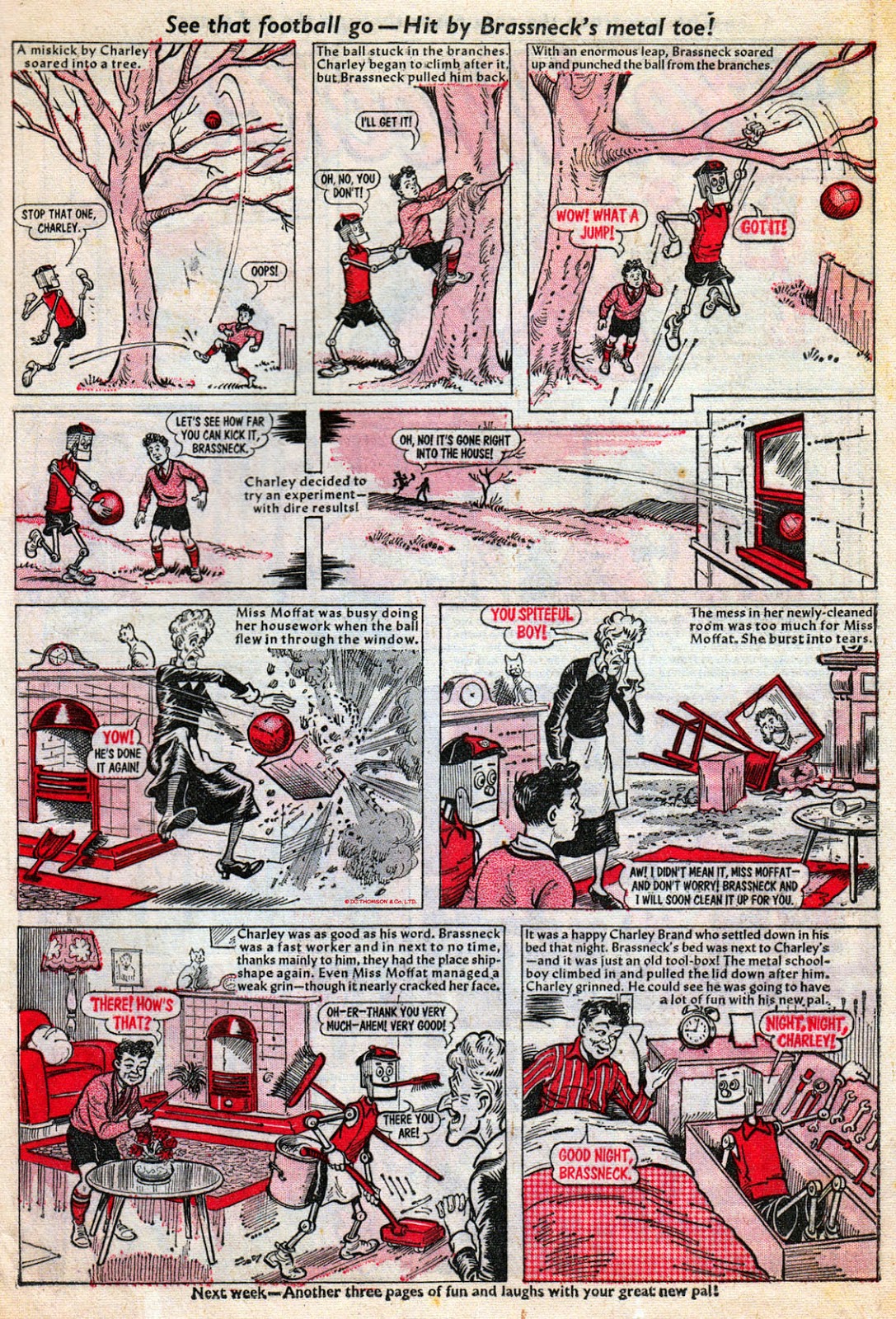 A real joy to see...good to see the first one! Made my day!

The character even made it on to the digital Dandy recently...shame its gone now..

I suppose the character seems a bit old fashioned now but I'm sure he'll be back in some form one day. The concept of a kid having a robot pal is too good to keep in limbo forever.

Brassneck was one of my favourite characters in The Dandy. Thanks to his artist. His later creation Jack Silver was brilliant - especially his scenes of Marsupial and its lifeforms. Daresay Brassneck will eventually pop up in The Beano.

Brassneck has a few stories in the latest Dandy Annual, too (out now in all good remainder shops. Some artwork by a certain L. Stringer)

Anyway, Charley's uncle claims to have invented Brassneck, but he invented him pretty quickly, and, apparently, without many resources. It's clear he actually just got him from somewhere else, and that somewhere else is Japan, where he was originally known as Private 3rd class Robot (aka Robotto Santohei).

He ably assisted the Japanese marines, but must have been captured and reprogrammed after the war. He also lost his ears, which was no doubt the cause of a few misunderstandings.

It'd be good if some Dandy characters did appear in The Beano, Sid, and I know readers are speculating on that, but I've heard nothing in that regard. Perhaps while The Dandy Annual is still running they prefer to keep Dandy characters there.

Interesting, Mike. I've never seen that Japanese character before. A few slight similarities to Brassneck but that was the standard way to draw robots I suppose.

By the way, the Brassneck pages in the current Dandy Annual are by Steve Beckett.

I thought the Brassneck stories in the Dandy Ann were by you Lew?

Great to see the first episode Lew. I never read it in the weeklies, but reading the annuals in the eighties it was always great to see these unfamiliar stories, Jumbo and Jonah appeared in the Beano annuals sometimes too.

No Jumbo or Jonah in this year's Beano Annual unfortunately. Perhaps they'll be back one day.

Anon, I've never drawn Brassneck. Steve Beckett is the artist. The strips I did for the 2015 book are Smasher, Korky, and Keyhole Kate.

Cute strip but one part sort of makes no sense. How could a football cause so much dust? It would of been better if the football smashed the window and they had to clear that up.

That's not dust. It's ash. When you have a coal fire (as most of us did back then) you have to clear out the ashes every day, which is what's happening in the strip. The ball has hit the tray of ashes, scattering them across the room.

I grew up with a coal fire and what a mess they could be with all the ashes - but they were handy during a power cut as we could make tea and toast on the fire :)

I've never seen the first Brassneck before, so thanks for posting this.

When the character returned in the 1980s, he was given another origin story in Dandy Comic Library #8, in which Brassneck's creator was not so friendly - his name was Professor Dooyerwurst.

I think I have that Comic Library somewhere. I suppose it made for a more exciting origin but I still prefer the first one.

Colin, we used to make toast on our fire too, every morning instead of using the grill. I really liked having an open fire when I was growing up. Not such a dry heat as that from electric or gas fires.

Ah, the inhuman accomplice, always a winner. Why be outrageously naughty when you can get an odd-ball, a genie, or even a lifeless machine to stick out its (brass) neck on your behalf.
Holroyd's work seems to have much in common with D.D. Watkins'. I wonder if he also did illustrations for adventure text-stories.

Being consistent with me recent comments, here's 4 posts (1907-1951) from my old blog tagged 'robot'(I'm especially taken by the sad and slightly unhinged origin of Tin-Can Tommy) :
http://bumperfunspecial.tumblr.com/tagged/robot

I remember a Brassneck story in one of the Dandy annuals in which for some reason a load of cats were on and around a parked car. The look on the face of one of the cats just totally cracked me up.

I guess you had to be there! lol

Loved Brassneck and it was wonderful to read the first episode. I was only 5 at the time and I didn't have the Dandy. Many thanks for the blog

You're welcome. Bill Holroyd did some great work. I remember laughing at a Joe White story in a Dandy Book.

Dear Mr. Stronger, I have never had the honour to correspond with a comic artist despite being an avid comic collector particularly Beanos, Dandys, Beezers and Toppers. My interest falls into comics from the early 60's to late 80's. This of course represents comics I inherited from my dad's childhood collection to what I continued purchasing as a young lad. My collection and interest outgrew themselves with the advent of eBay since it became possible to acquire back issues from my favourite period. When speaking about favourite period one means the artists and characters one gets used and attached to. To focus on the brassneck subject above, I note that artist Bill Holroyd was responsible to a number of comic strips namely Brassneck, Jack Silver, Screwy Driver, Itchy Snitch and many others which currently fail me. Holroyd seems to have been electromechanically minded and interested, apart from the fact that his drawings feature a significant amount of science fiction in it. Another artist who I admire greatly is the iconic Eric Roberts responsible mainly for Winker Watson, Dirty Dick and the numerous witty two page strips in Dandy annuals bearing his trademark command of the use of excellent English.

Leo Baxendale who penned Minnie the Minx is also another favourite.

Once again I am pleased and very honoured to correspond with a comic artist. I will stop here as I shall otherwise write forever.

Hi Ken,
Good to hear from you. Thanks for writing. Those artists are amongst my favourites too. There are a few more examples of their work on my blog. If you're reading this on a desktop computer, just type in their names in the search window at the left and you'll find other posts about them.