I was never a fan of war strips and I must admit I often used to skip the four pages of Captain Hurricane that were at the front of Valiant every week. However it can't be denied that he was a popular character, lasting the duration of the comic's 14 year span.

In the early days he was depicted in a more 'straight' adventure style but after a while the art and stories became more exaggerated. The main artist was R. Charles Roylace, who drew both the strips I'm showing here today, although other artists such as Jack Pamby and Fred T. Holmes also filled in from time to time. Looking back at it now, the strip does have a certain charm, could be very funny, and it's certainly well illustrated, although some of the racist remarks made by Hurricane towards Germans and the Japanese make one wince today.

Without further ado, here's the very first Captain Hurricane story from Valiant No.1, dated 6th October 1962, (scanned from a photocopy)... 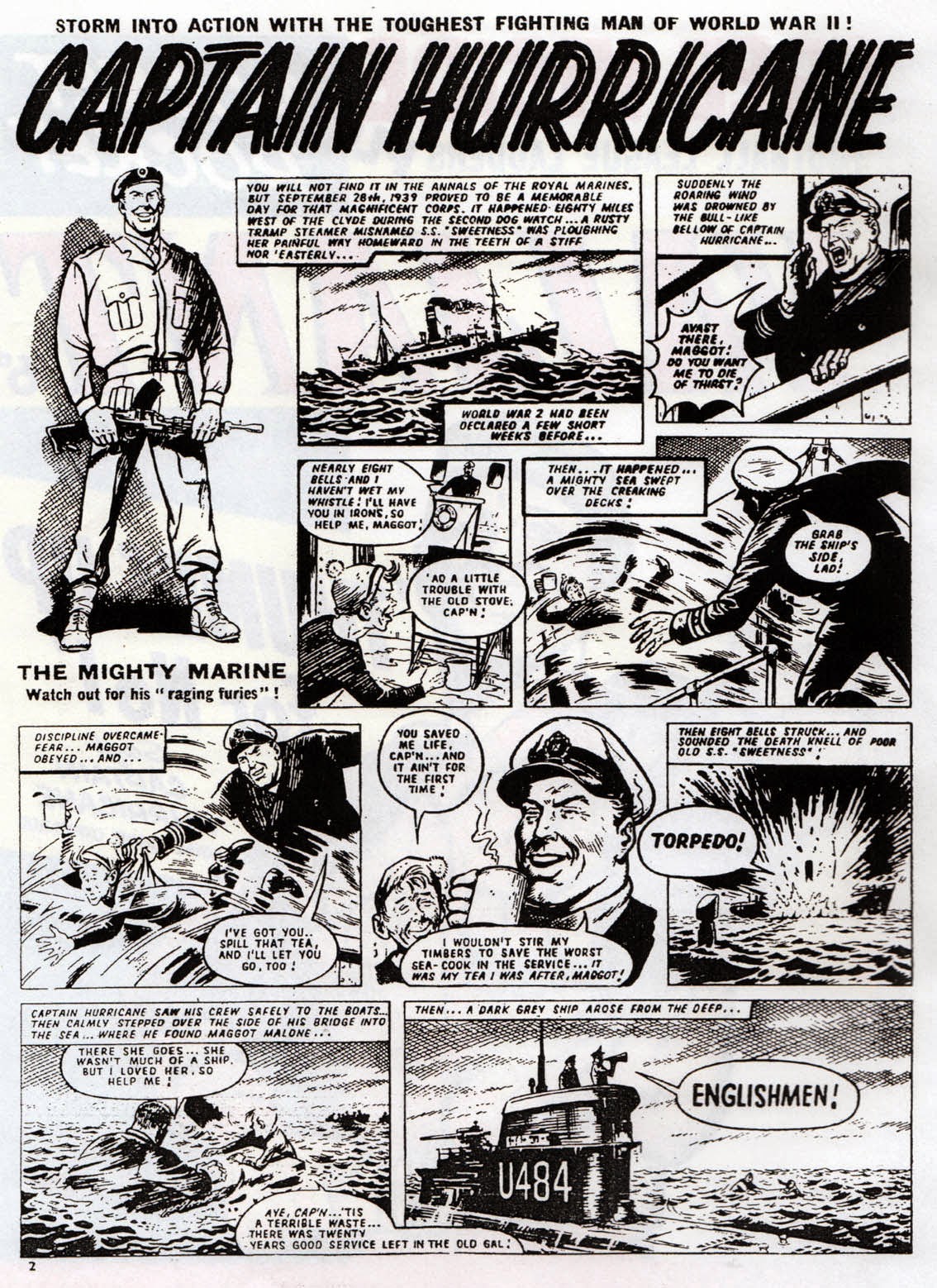 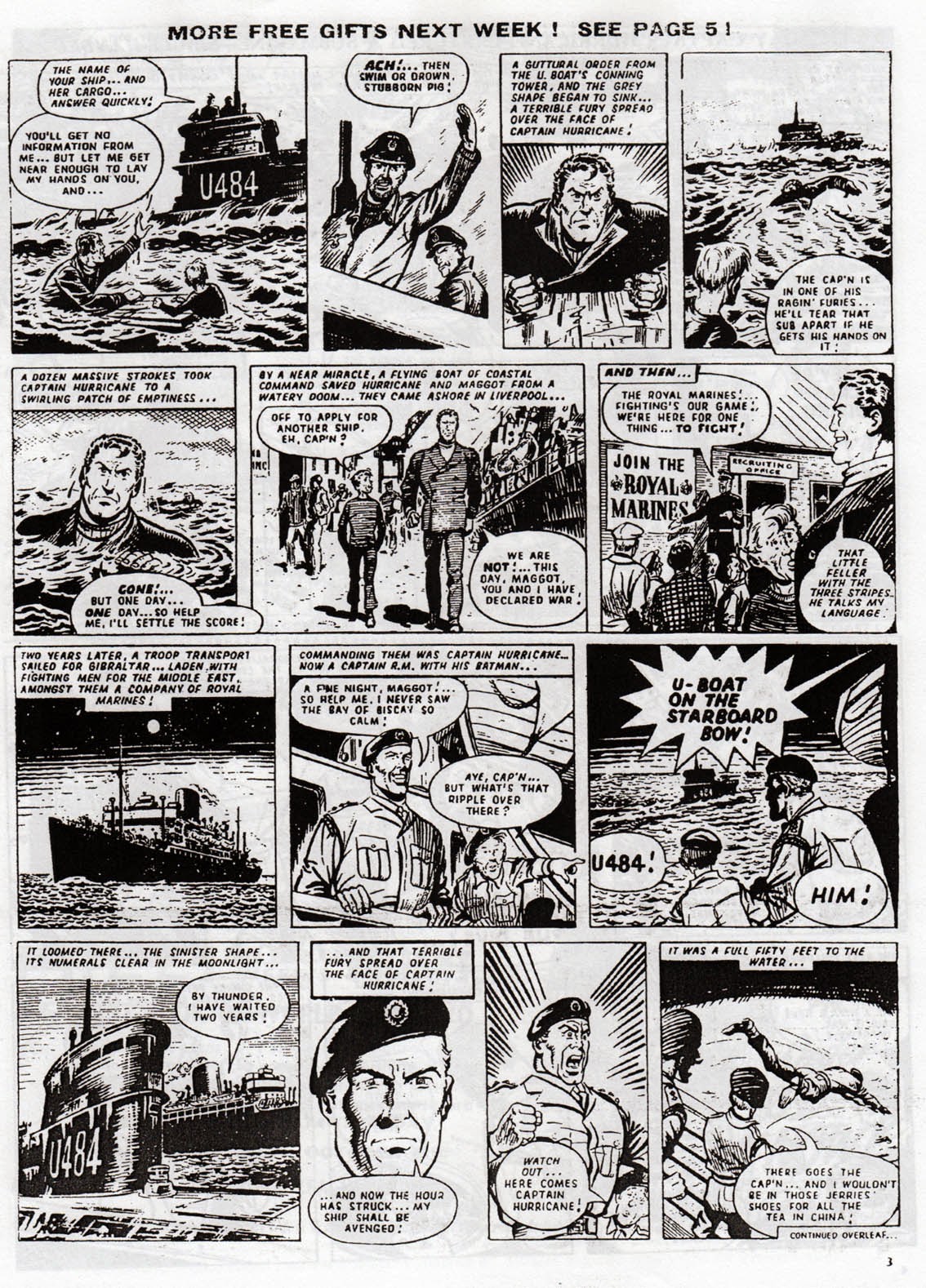 Now a story from ten years later, from Valiant and TV21 dated May 27th 1972. This exaggerated, more humourous style, is the one that most readers will remember... 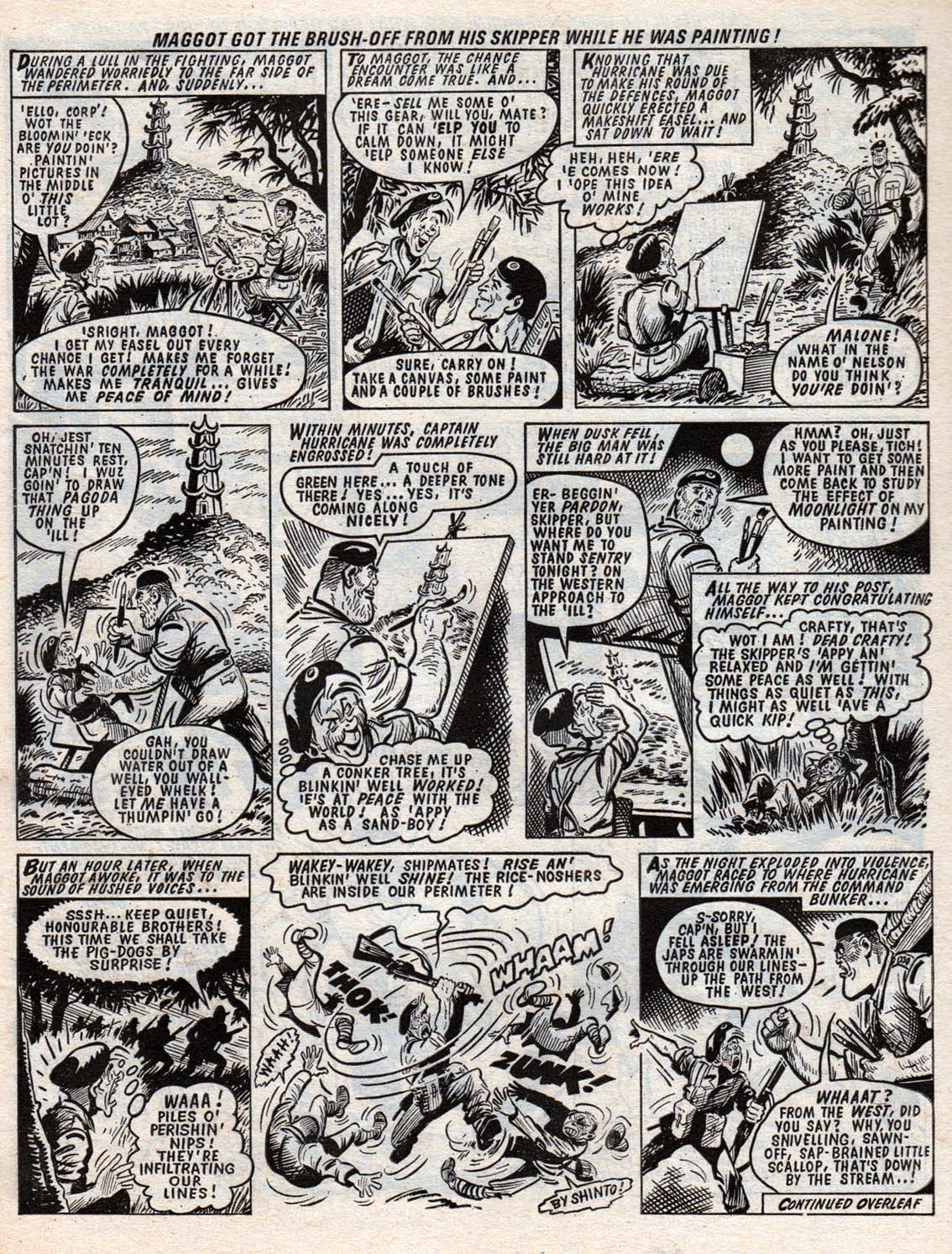 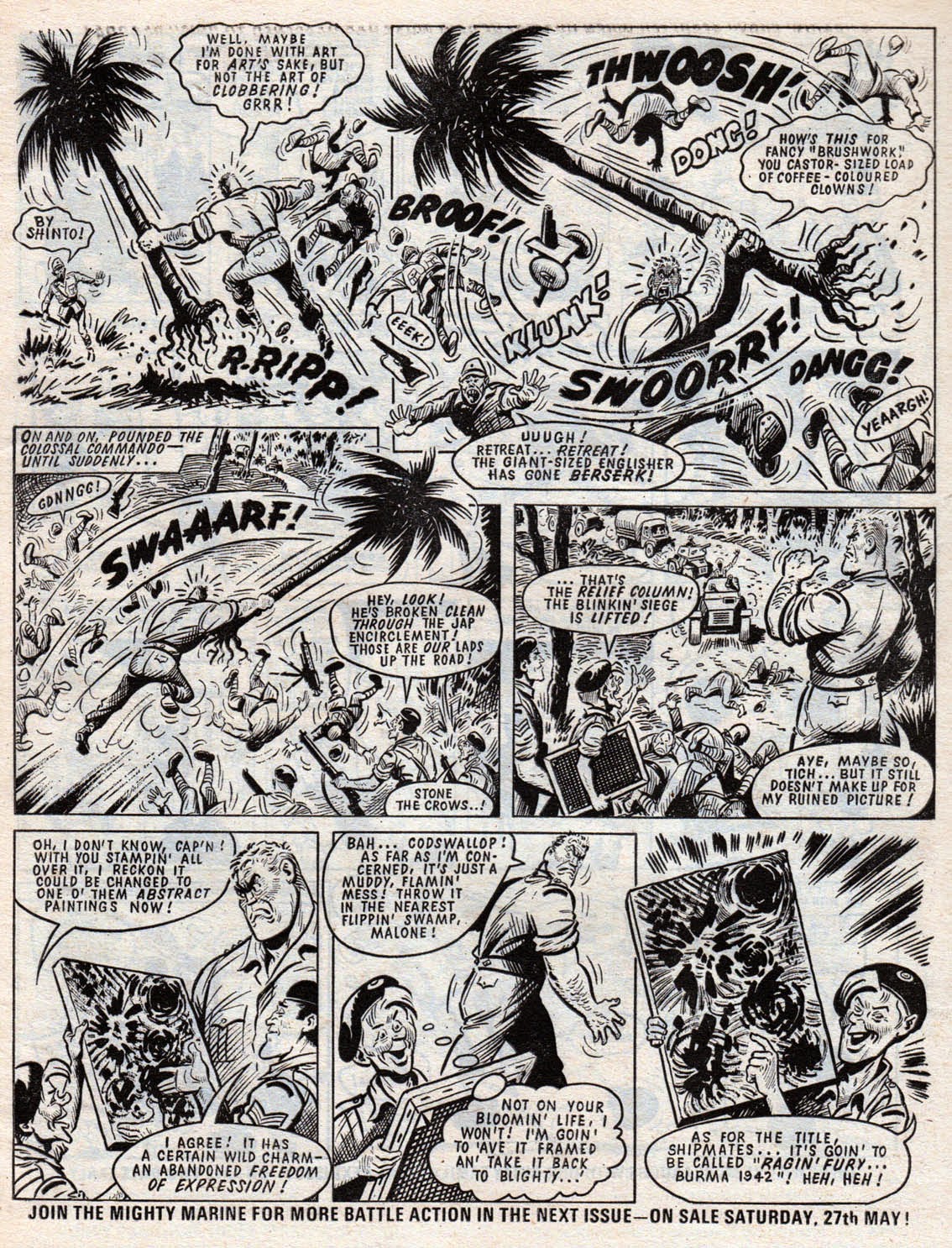 Captain Hurricane was a character very much of his time, when war strips appeared in virtually every boys' adventure comic. By 1976, when Valiant merged into Battle Picture Weekly, he'd had his day. Presumably not as popular as he once was, and perhaps too jocular for the deadly serious Battle comic, the strip was dropped and he only appeared in the merged comic as a mascot on the letters page, eventually being phased out altogether. He later turned up alongside other old comic characters in the mini-series Albion written by Leah Moore and John Reppion, illustrated by Shane Oakley.
Posted by Lew Stringer at 13:58

Wow, Captain Hurricane And the League ladders, no wonder I bought Valiant...and everything else.

Thanks! I've been meaning to show that first strip for a long time but kept forgetting. Glad you liked it.

Lew, I had completely forgotten about the Captain's "Raging Furies" . Something to look forward to but I don't recall if he had a RF in each comic strip ?

A bit of a knock-off of Herge's Haddock and his moments of bad behavior ?

Thanks from me too, Lew. I loved CH as a kid, especially the way he would, in his "raging fury" never actually shoot a single German - he would just dent their helmets with the butt of his rifle! " TAKE THAT, YOU FLAMIN' SAUSAGE GUZZLERS!"

I think his Ragin' Furies were the thing his fans looked forward to so I'm sure they would be in every week.

I've never really followed Tintin but I don't recall Captain Haddock's temper being quite so extreme.

Like so many of these cartoons, I do wonder if the original work of Charles Roylance will ever surface in the marketplace or if they are lost for ever. It's difficult to even find biographical info of Roylance,

Again, thanks for prompting all these memories

Lots of original art pages from Valiant, Lion, etc turn up for sale at various comic marts and conventions. I'm sure there were some Captain Hurricane pages amongst them.

There are also a few for sale on eBay. Here's one with Hurricane having one of his ragin' furies:

Thanks Lew, hopefully I can catch a convention when I cruise home in November, I will also check eBay.
Hedley

That looks like an unofficial replica you've scanned Lew. The date is missing from the copyright line. Aren't photocopies where the publisher or contributors receive no recompense just as bad as other forms of piracy you so often rail against?

I've already said in the post that those early pages were scanned from a photocopy. I presumed the pages I received were photocopied from from the actual comic not a bootleg. It's not the same thing as entire pirated comics being made available for download is it?

Lol! Who would scrutinize a blog for a tiny date? Keep up the good work Lew. Those pages look good to me. Hercules Hurrican was a favourite and I thought it funny myself. Then we have the Steel Commano in Lion, well, that wasn't so good was it but we loved those weeklies!

Do not feed the troll

I don't think Kev was trolling but I'm not sure what motivated him to make such a comment. I suppose the Captain Hurricane photocopies are "bootleg" in that the owner of the comic didn't want to send me his original comic but I think it's disproportionate to compare that to online piracy!

Trolls being anonymous posters who add nothing to a legitimate enquiry? A photocopy is the same as any other form of piracy I'd say. But as you prefer to avoid the issue I won't waste your time. Or mine.

I think you're being a little bit petty Kev. Also hypocritical in complaining about 'anonymous posters' when you're anonymous yourself! Yep, all the hallmarks of trolling sure enough. I had given you the benefit of the doubt but you're obviously just a wind-up merchant. Sad. On your way now. You've had your fun.

Aw, this was an incredibly good post. Spending some time and actual effort to make
a superb article… but what can I say… I procrastinate a whole lot and never seem to get anything done.

I'd like to remind "Kev" that the "issue" of the posting is about Captain Hurricane, NOT anything he's brought to the table. Kev is the one avoiding the issue.


Thanks for showing the first CH story Lew. I only ever saw the later ones. When did he start to change to a less realistic figure?

I'm not sure Gareth. The earliest issues I have are from 1965 and he had become the familiar comedy-adventure character by then.

I never liked Captain Hurricane (loved the Valiant comic though) and like yourself Lew, I didn't really read the stories but I loved the cartoony art style so it was nice to finally put a name to the artist - do you know of anything else that R. Charles Roylace drew?

Come on Lew you know the routine by now. Guy using a name that's never been used here before posts a comment taking the subject off tangent to try and score points over some trivial issue with you. Why give him the satisfaction of letting him post here? Sack him off for good and don't let him needle you. Don't make me swear Lew but he's a ****** waster space. Lol!

Don't hold back, Phil. Tell us what you really think. :)
(Seriously though, no more of his comments are getting through. I've deleted two as they were clearly antagonistic. Sorry I didn't spot the signs from the start, folks!)

Paul, I know that the artist had a long run on 'Nipper' in Tiger comic after Solano Lopez, but I don't recall anything else at the moment. I'm sure there's info on the 'net about him.

Nice ventriloquist act. At least two anons, Phil and Gareth....and possibly even Kev as well. Work a bit slow at the moment?

Hey troll! You missed out Paul, John, and Hedley from your silly theory. As you're obviously (and quite rightly) a staunch believer in genuine comments I can only assume that 'Captain Birdseye' is your real name. I haven't seen you on the telly for years. Sorry to hear your work dried up yonks ago and you're now reduced to 'trawling' the net.

I've checked in my mirror. I'm definitely me!

Ignore him Lew, he'll say anything to get attention.
Phil

Lew, I know you're a polite man but just tell that troll to F*CK OFF! He's a pain in the bum. Seriously, don't publish any more comments by him. He's a weirdie gagging for attention.

On topic now, is there any possibility of a vol 2 of Steel Claw? It desperately needs reprinting. It's a classic.

Ha! I think you've already said it for me, Jase. Thankfully this blog has been troll-free for quite a while now. (I still get loads of spam though.)

Steel Claw volume 2? Not likely at the moment I think. I understand that IPC were asking a lot for anyone to reprint their works, although since Time-Warner took over perhaps that will change. The other factor is that sadly as time goes on there are less people around who remember those strips, so it's a shrinking market.