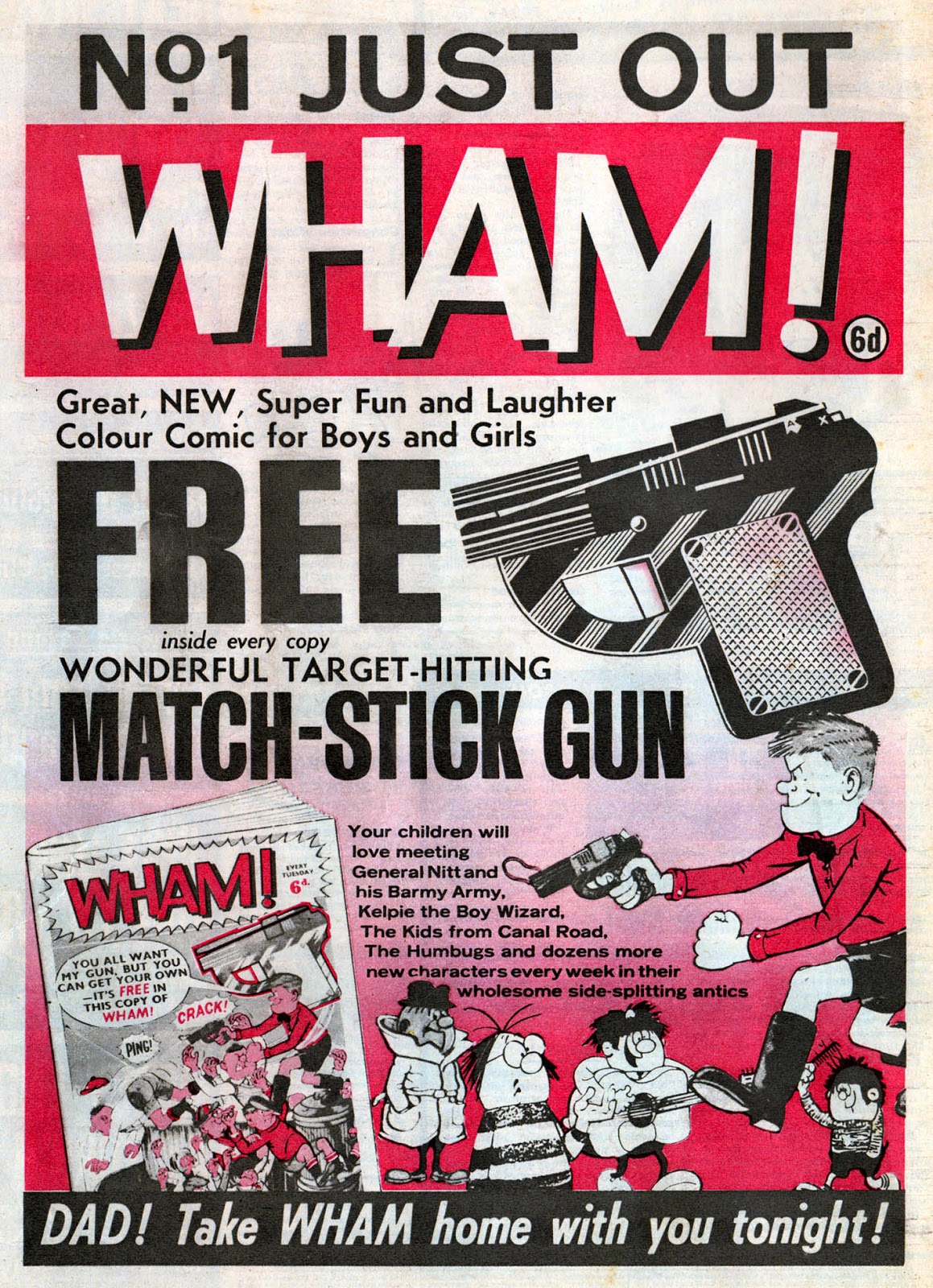 Remember a couple of weeks ago I showed an ad for Wham! No.1 from 1964 that collector 'stevezodiac' had kindly let me post here? Well, I found a copy of the mag it was in on eBay and promptly bought it, so here's a bigger scan of the advert. It appeared on the back cover of Odhams' Today magazine dated June 20th 1964.

But that's not all! Inside the magazine on page 26 is a little promotion for the comic... 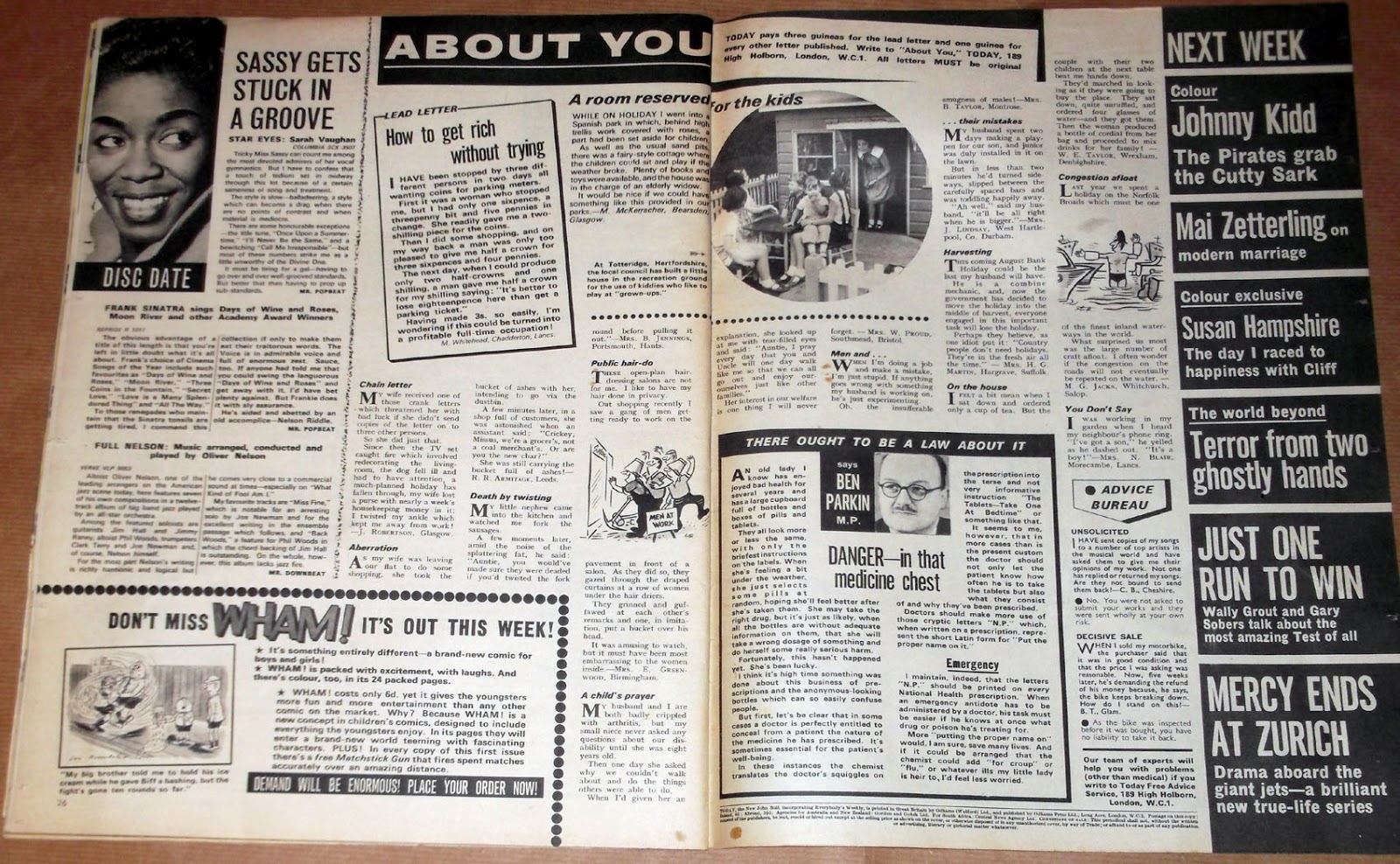 Here's a bigger image. Click to see it larger.

...and a close up of the accompanying cartoon by Leo Baxendale, which I think was drawn exclusively for the magazine... 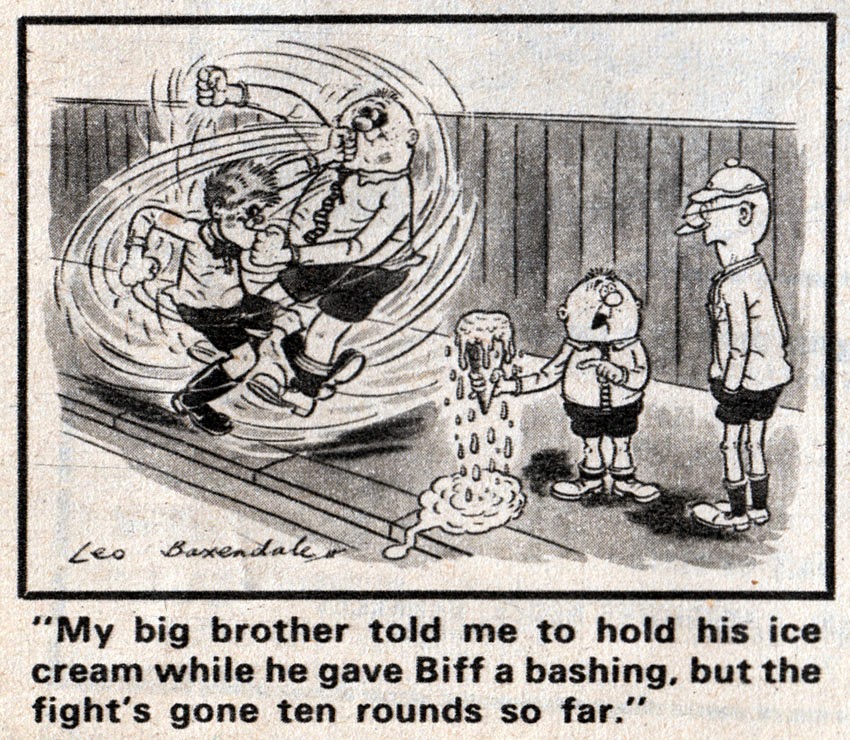 Good stuff eh? Interesting that Wham! was promoted as "a new concept in children's comics, designed to include everything the youngsters enjoy". It was pretty accurate I think, as Wham! seemed more modern than other comics of the time.

I had to smile at the back page ad saying that the comic was "wholesome". Conductive to good health or moral well being? Well, it certainly cheered us all up that's for sure! If you're interested in looking for a copy of this issue of Today on eBay or wherever, here's the cover. Despite appearances it's not a naturist magazine! 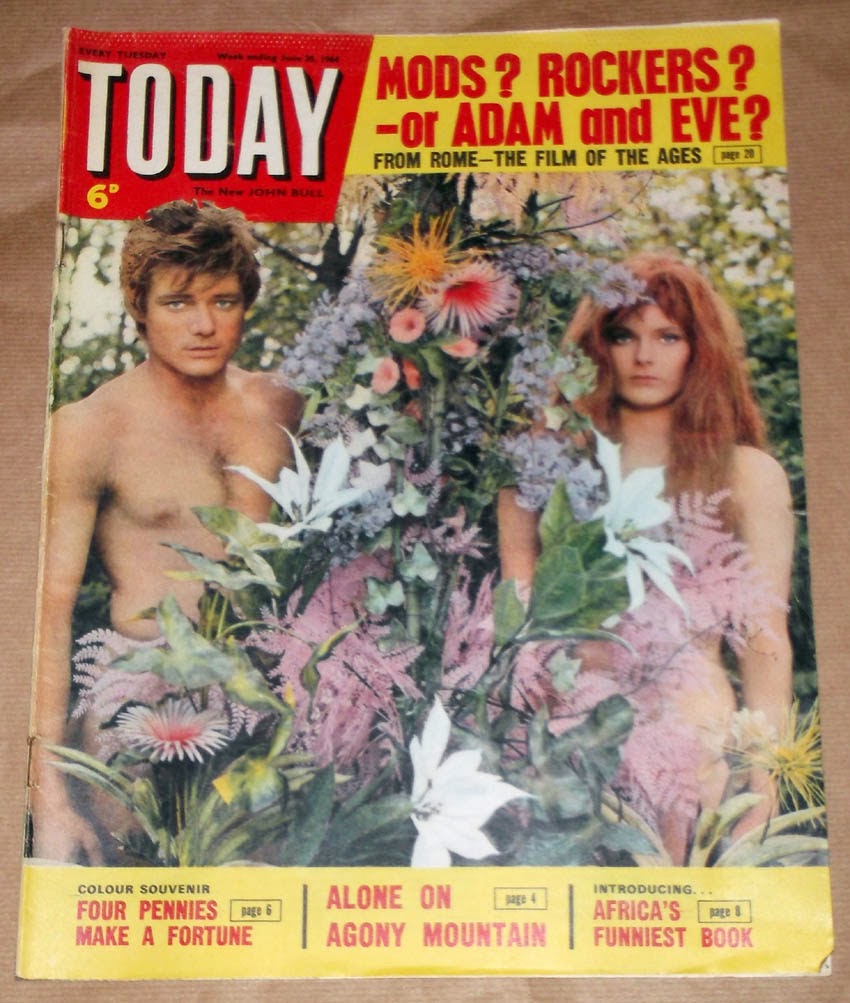 What a brilliant find Lew, thank you (and Steve Zodiac) for sharing this with us - there is just something about Odhams books that I just love whether that be an advert for them or the strips themselves - great stuff again.

Yes I'm grateful to Steve for bringing it to my attention and was pleased to find this copy on eBay last week. I should add that Today was about tabloid size so this was quite a big, striking advert on the back cover.

Seconded thanks to Steve Zodiac for the pictures they look wonderful. I have never seen this!

There's a bit if a misunderstanding here I think. As I said, these scans are ones I did from the mag I bought recently. Glad you like them.

Nice one Lew. i don't think they'd get away with a matchstick gun now, eh? There's bound to be some health and safety law about it now..ha ha!!

Another excellent post, Lew, - the actual embryo of what would become my beloved Power Comics, no less!
I'm pleased you also showed the cover and that's interesting that it is tabloid-sized, as in my mixed-up memory, I always remembered the magazine as magazine-sized at my Granny's, like Weekend, which they replaced it with. The same for John Bull, which is whatToday used to be called.
Anyone out there remember clearly what size John Bull was?

I'm surprised they got away with it then, Paddykool. Pow and Fantastic also had free guns but they fired cardboard discs. Probably trying to discourage kids from playing with matches by then.

John, I suppose it's possible Today may have gone to a smaller size later perhaps? I'd never heard of it until recently.

Goodness me, I was all of two days old when the advert appeared. It's funny you mention about how much more modern it seemed, my equivalent in that department would be Krazy in the Seventiies - that and spinoff Cheeky Weekly work like bolts from the blue.

It was cover dated 20th June but would have been out before then. Weekly publications carried the date of the following Saturday, even though they would be in the shops up to a week beforehand. I don't know which day Today came out but it'd be the week of your birth anyway.

I'd stopped buying humour comics by the mid 1970s for a few years but I did buy the first issues of Krazy and Cheeky.

This takes me back. I clearly remember waiting with bated breath for the first copy of Wham! to come out because of this kind of clever marketing -- though the free match gun didn't hurt either. It's only now, with reflection, that I can see how much my sense of humour was shaped by Baxendale's work in that comic.

Coincidentally, I can look across my office and see a Tom Thug sticker on a box of books where it must have been for almost thirty years. Oink! was my oldest child's comic of choice. I'm pretty sure that I would have influenced that choice of comic though -- I certainly read it cover to cover every week.

These may well be the only two comics I ever really cared about.

They're the only two comics you need.