Commando goes further back in time 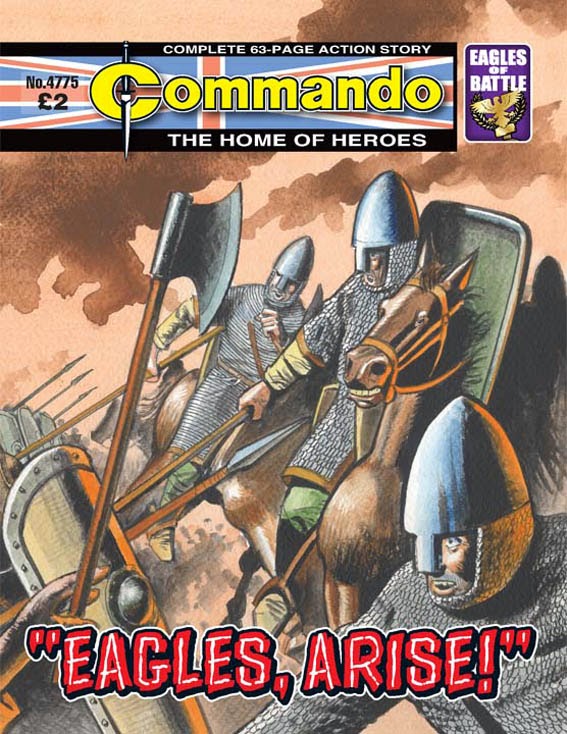 The stories in DC Thomson's Commando comic have usually focused on World War 2, sometimes World War 1, and a few other 20th Century conflicts. It has featured stories of other eras too from time to time, but not for a while. That changes this week in Commando No.4775 with Eagles Arise by Ferg Handley and Keith Page being set in the 11th Century!

Commando No 4775 – “Eagles, Arise!”
England, after 1066, was a violent place. As William of Normandy tightened his grip on the English throne, it was a time of war and great unrest.
The incoming Norman forces ruled with an iron fist. One especially cruel member of the new ruling class was Roland of Alain — who aimed to crush any resistance from those he regarded as peasant upstarts.
One such “upstart” was Carrick. He and his band of rebels were determined to put up a fight against their oppressors. A fight to the death, if necessary…

Commando No 4776 – Sea Fury
Spray lashed the cockpit screen, blinding the big pilot as he fought the bucking controls to belly-land the crippled Albacore in the choppy sea. Once, twice, she bounced before she hit the icy water at terrifying speed.
This was the second time young “Gusty” Bellows of the Fleet Air Arm had come off second-best to Kapitan Kreuzmann of the German Navy — the ruthless Kreuzmann, with his submarine mother-ship, “Seewolf”, bristling with guns, and his pack of U-boats. But Gusty was determined that next time it would be different — if there was a next time…

It’s a difficult thing to do, to write a successful war comic based on ships. Ask Pat Mills — creator of Charley’s War — he’ll tell you. What Roger Clegg did here was to throw in some aircraft, add a man wracked with guilt and paint a very effective villain. All these lift it above the waves trying to suck it under.
With a menace-laden Ken Barr cover and some very atmospheric art by the King Of Zip-A-Tone, Gordon Livingstone, who almost has you feeling the icy water round your ankles, it the classic Commando formula — believable characters struggling against the odds…and themselves. 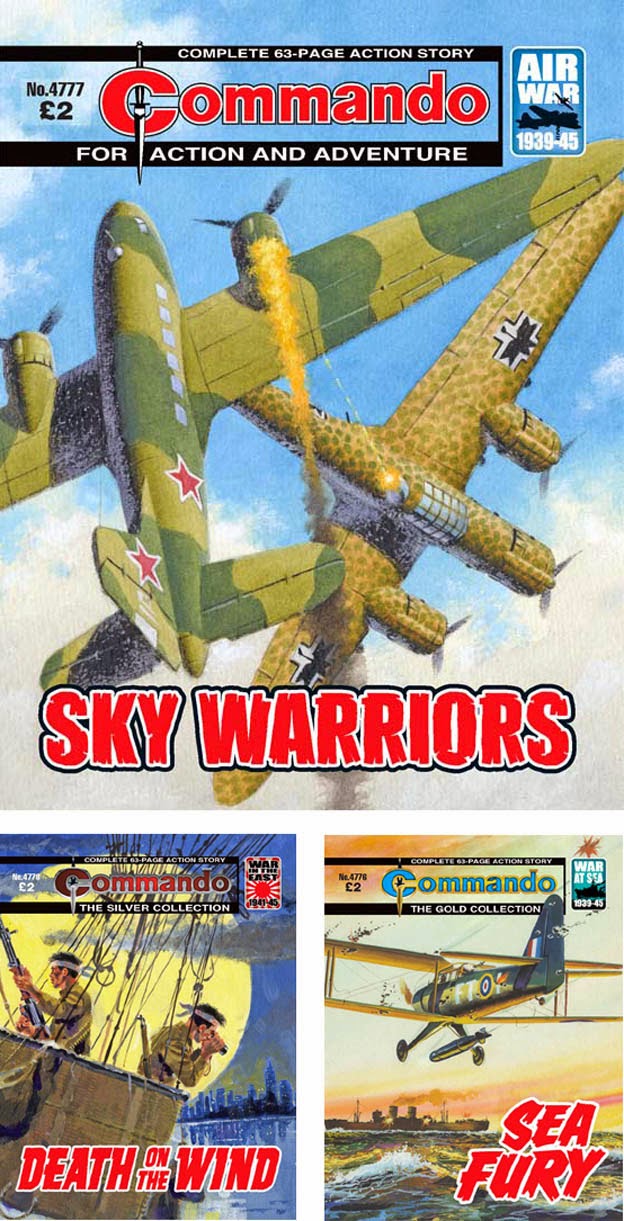 Commando No 4777 – Sky Warriors
Towards the end of the Second World War, the Balkan Air Force operated over Greece and Yugoslavia, supplying the Partisans and fighting Axis air power. Made up of men and aircraft of many different nationalities, it was an uneasy alliance at the best of times. Former enemies were expected to put aside their differences and work together.
The tensions looked to have come to a head when Polish fliers clashed with a new-arrived Russian unit but that was just the start.

Commando No 4778 – Death On The Wind
Staff-Sergeant Harry Sale of the Special Air Service had fought his way out of more tight corners than he cared to remember. Now he was across in the USA, away from the bullets and the bombs, passing on his specialised knowledge to squads of hand-picked Yanks.
It was supposed to be a hard-earned break from the savage war in Europe but, before Harry could begin to relax even a little, a silent and deadly new weapon was drifting ever closer to his training area…

Okay, a story about a tough SAS Sergeant — I like it already. Except he’s swapped the savage war in Europe for a training exercise in Oregon, USA? Oh, righto…
Does this premise sound slightly underwhelming? It briefly crossed my mind but I’m glad to admit I was completely wrong. In fact, Death On The Wind is Commando at its most inventive — turning a plausible idea on its head and heading off on a taut, gripping adventure where hunter becomes hunted (and hunter once again!).
We’re lucky, then, that we might actually judge the book by its wonderful, moody cover — painted by the late, great Phil Gascoine.

Pleased to discover that individual digital issues of Commando can now be purchased on Comixology.

Preferable to the Commando Android app which only seemed to offer subscriptions rather than the ability to buy single issues.

Hopefully this will allow more people to find the comic, (although I had to search for it by name rather than it appearing under new releases for the week.)

That's great, because I know people were put off subscribing because they only wanted selected issues. I myself only buy it occasionally.