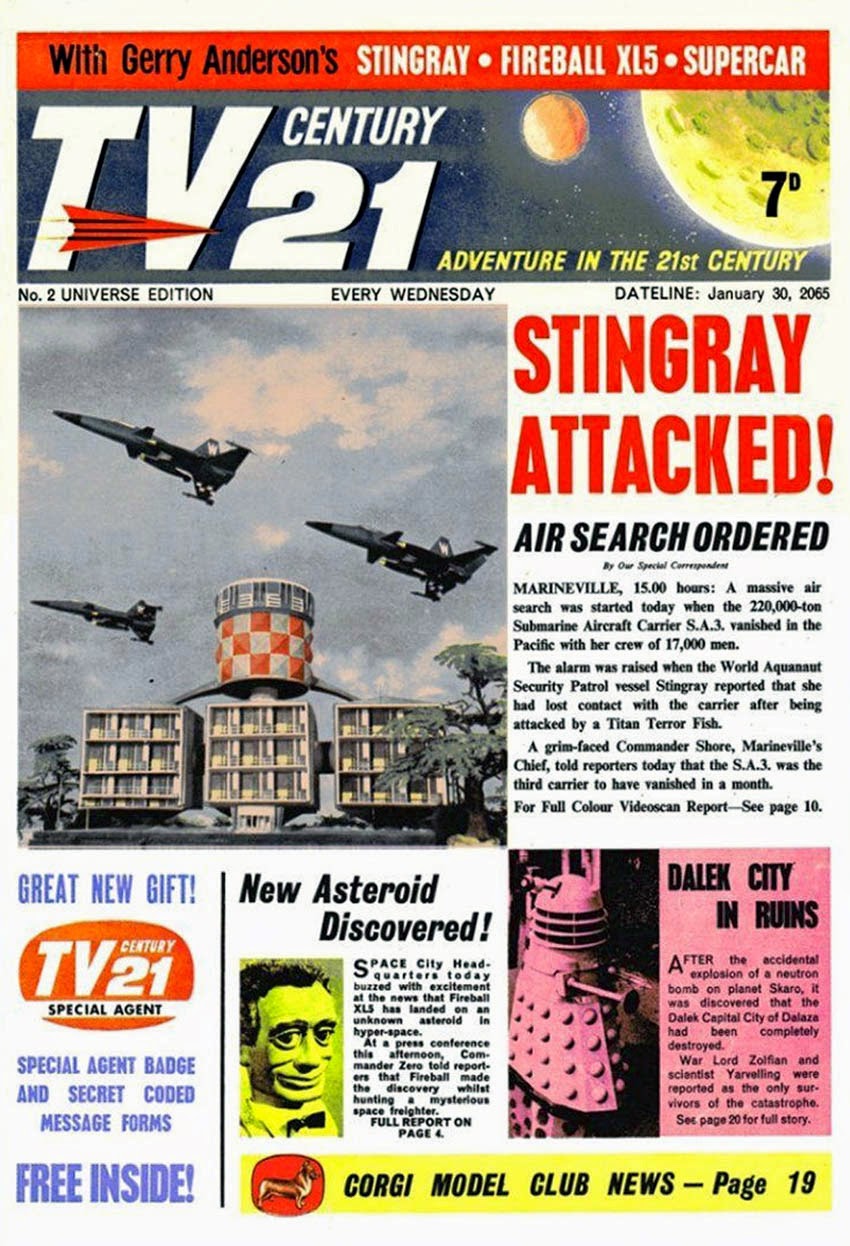 UPDATE: In an earlier version of this post last night I said that every week from now on I'd be showing a few highlights from the issue of TV Century 21 that went on sale exactly 50 years ago that day. However, after sleeping on it for a few hours I realised what a crazy notion that was. Not only would the idea get old very fast, not only would it take until September 2019 to complete, but many TV21 strips are available in reprint collections anyway, so most fans who want them already have them.

Still, now that I've done the work for this one I may as well re-post it. As I said on the original post, I don't actually have a copy of TV21 No.2 so what I've done is find a few pages from various sources. The cover shown above is actually from an eBay shop selling fridge magnets of all things!

The Stingray strip by Ron Embleton ran across the centre pages of TV21 No.2. In its absence of the actual comic I've scanned the reprint of it from Stingray the Comic No.1 (1992), which ran across two pages, hence the gutter. Nevertheless it still conveys the impact of Embleton's dynamic and colourful artwork. 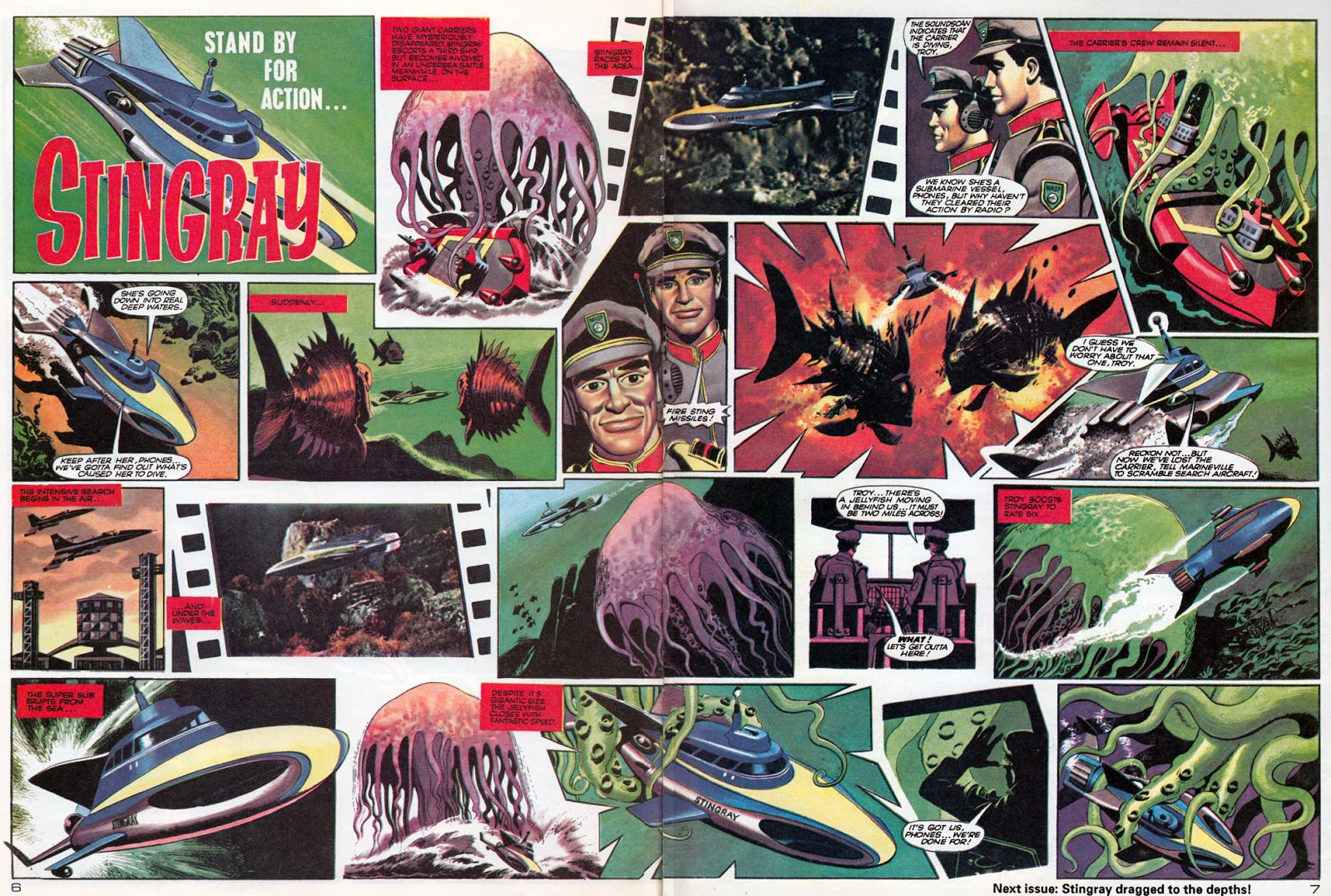 On the back page of that issue, the origin of The Daleks continues with art by Richard Jennings. With no comic to scan from I've used the appropriate page from Marvel's The Dalek Chronicles instead, but the result is the same. This is the strip that first appeared exactly 50 years ago today on Wednesday 27th January 1965... 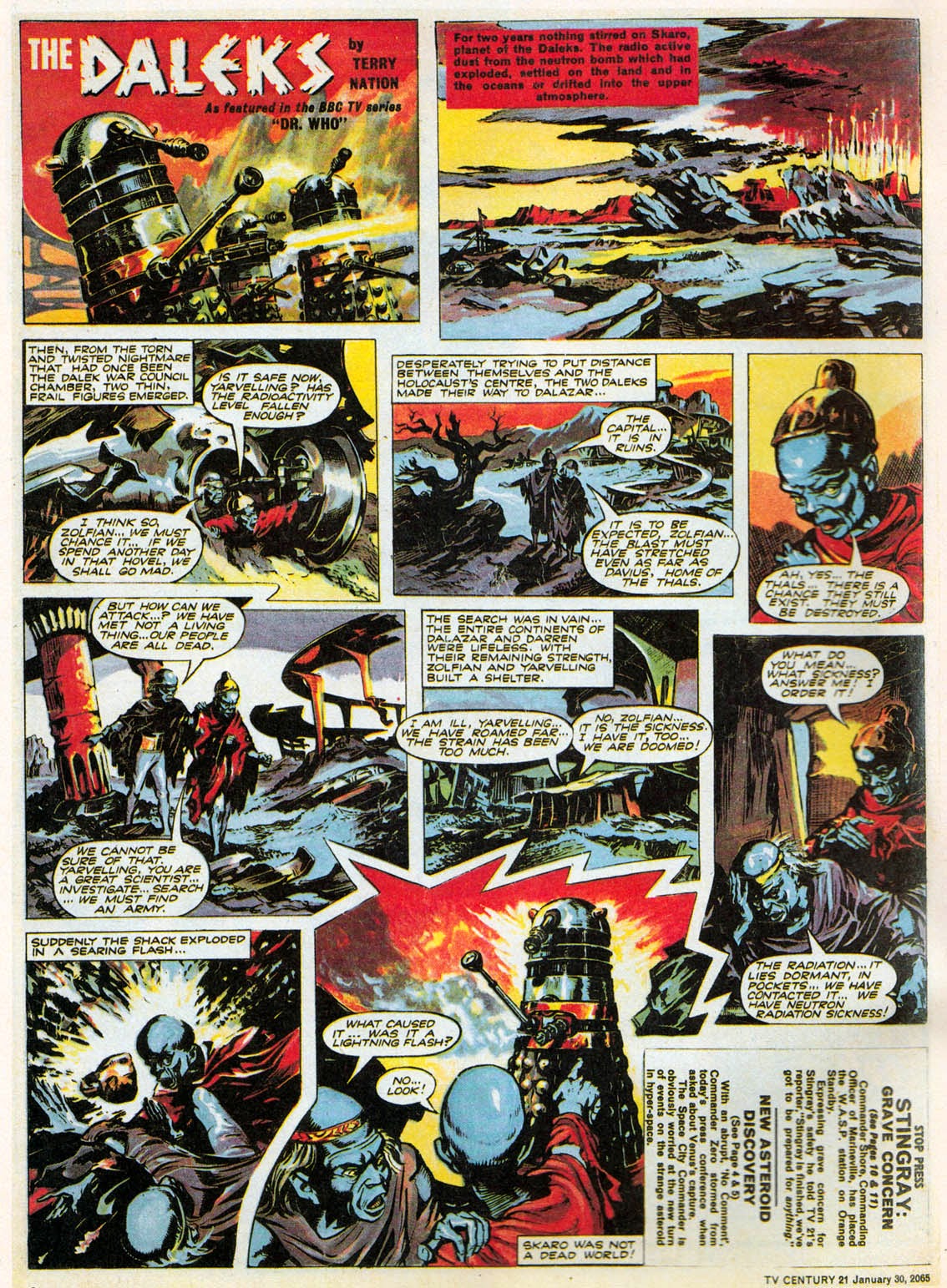 I'll still be revisiting TV21 from time to time, but the plan of doing it every week like clockwork was just one of those mad middle-of-the-night ideas that seemed good at the time but not so appealing in the cold light of day. I'm sorry if anyone is disappointed by my change of mind. I'd rather keep this blog operating like a rackety old TARDIS so that readers never know what to expect from week to week. What year will we visit next? Wait and see!
Posted by Lew Stringer at 10:30

Well, I would have looked forward to it every week, but if you've some issues missing it might be a chore to track down images. But whenever TV 21 crops up, I'll be there!

That wasn't the problem John. I only have four issues missing from the series of 242 so I'd just use scans of Fleetway reprints for those weeks, as I did with this one.

I just felt the whole exercise would become tedious and predictable after a while. TV21 only had a handful of strips each week so there'd be a lot of repetition of examples from the same artists. And to have to commit to it for four and a half years... nah, I can't see me blogging for that long.