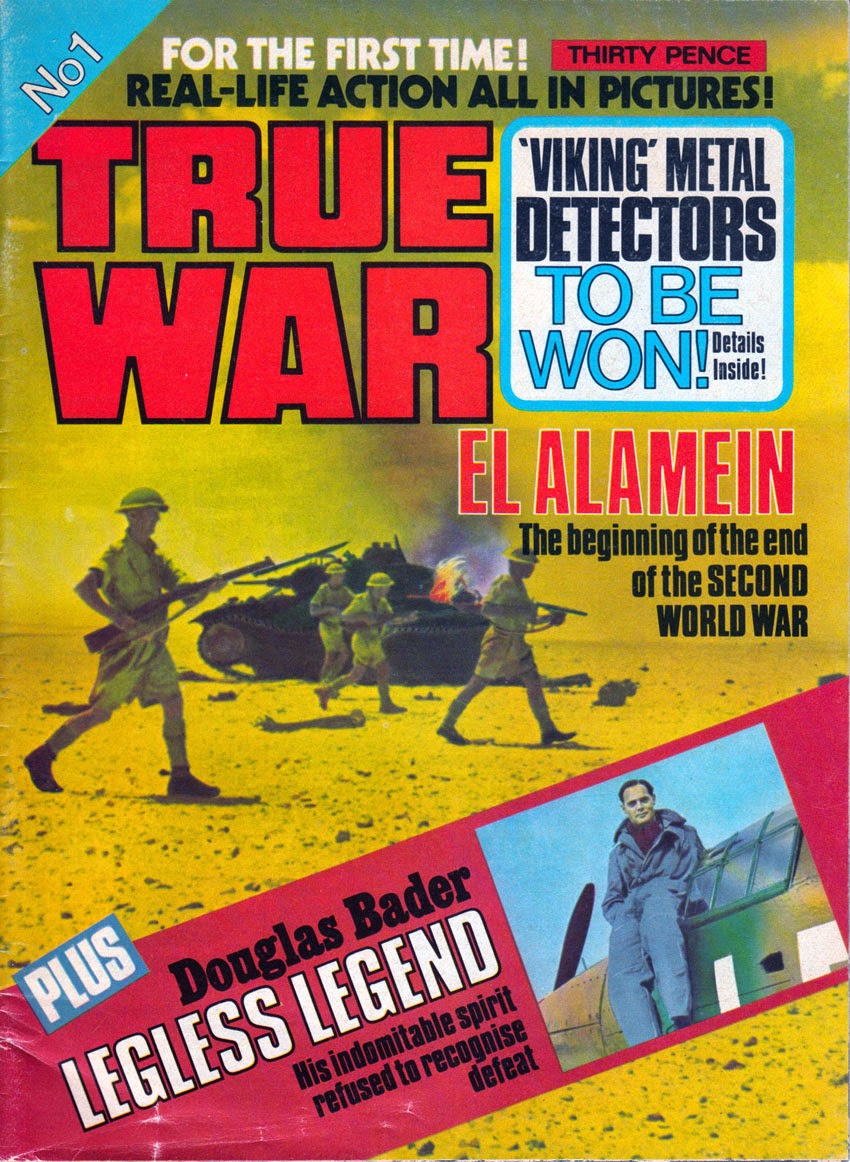 True War No.1 was published by IPC Magazines in June 1978. The 40 page comic magazine was quite unique in that it was clearly aimed at an older reader than IPC's usual fare. Also, instead of the traditional anthology format it just featured two long 15 page complete stories, both of which were based on fact rather than fiction. 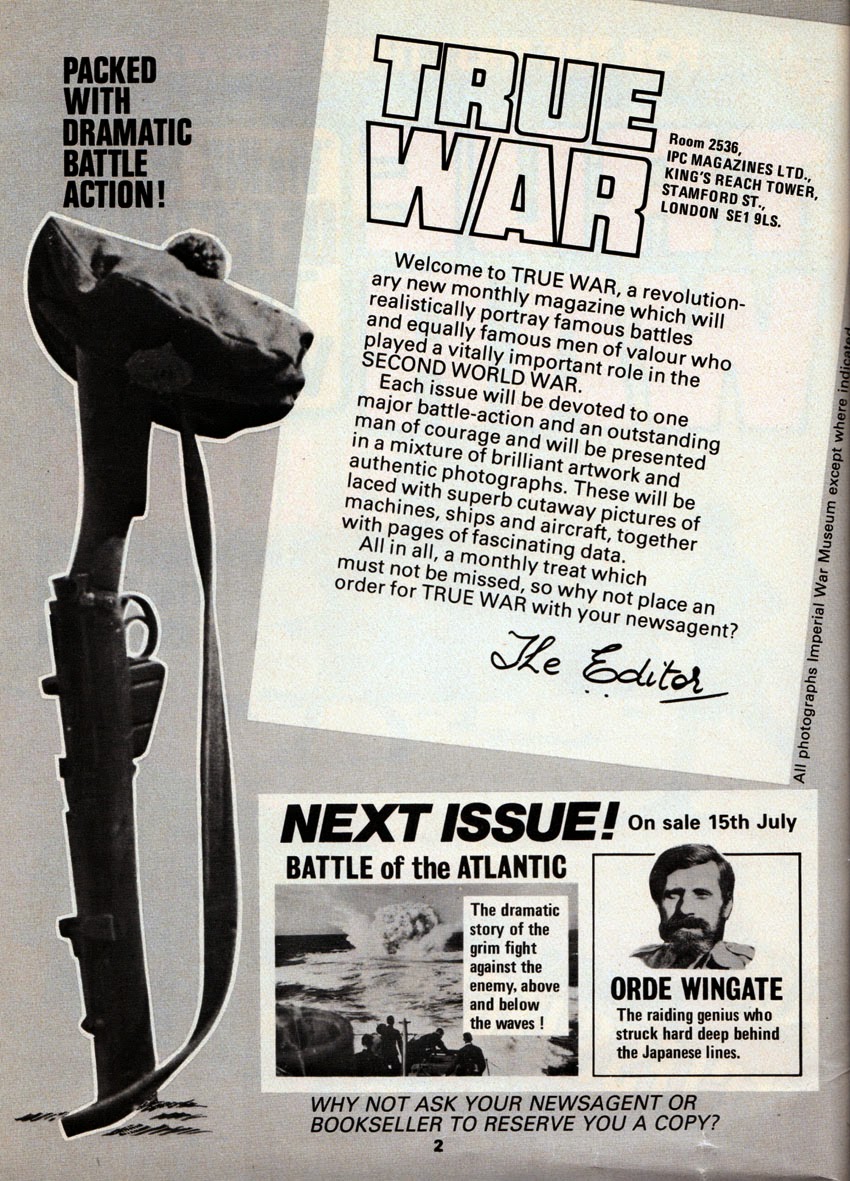 The first strip, The Battle of El Alamein, was superbly illustrated by Jim Watson. True War used a better paper stock than other IPC comics and it allowed good reproduction of painted artwork and photographs. Watson's grey wash technique really emphasized the qualities of his work. Here are a few examples... 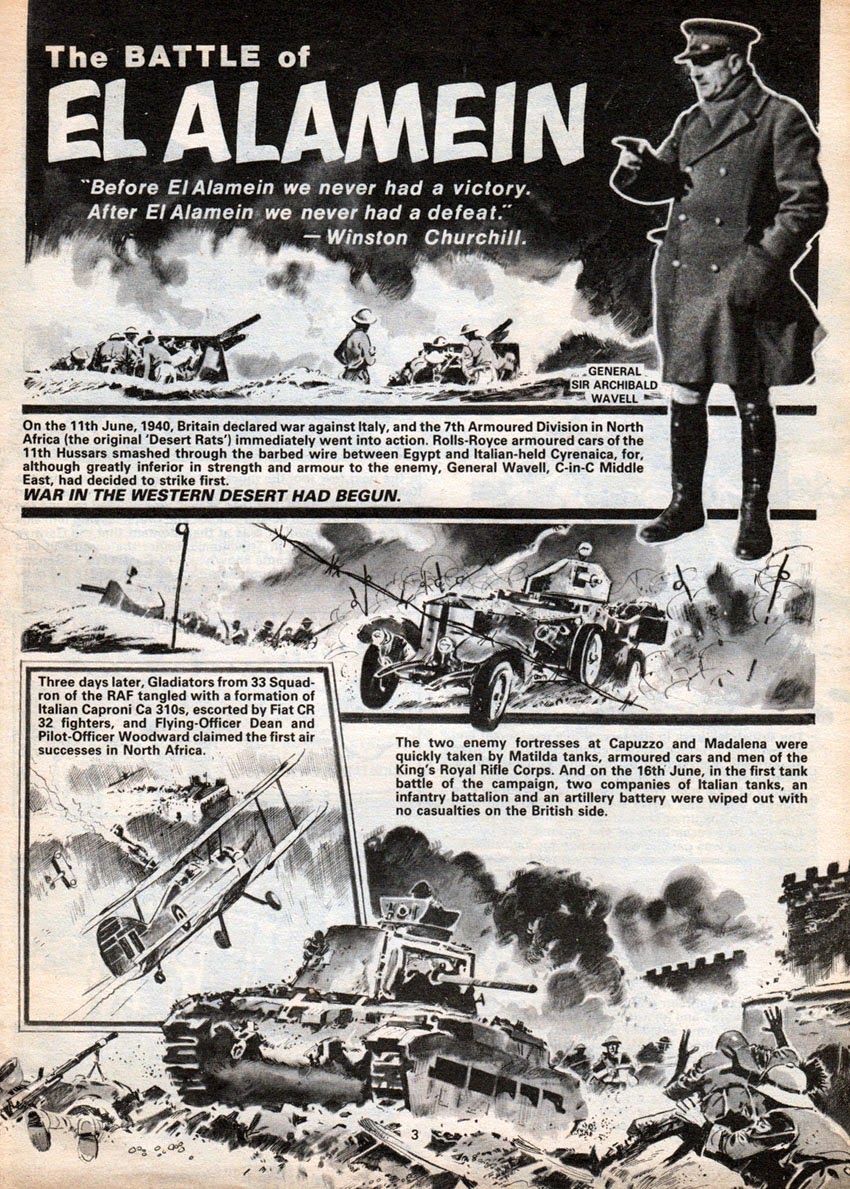 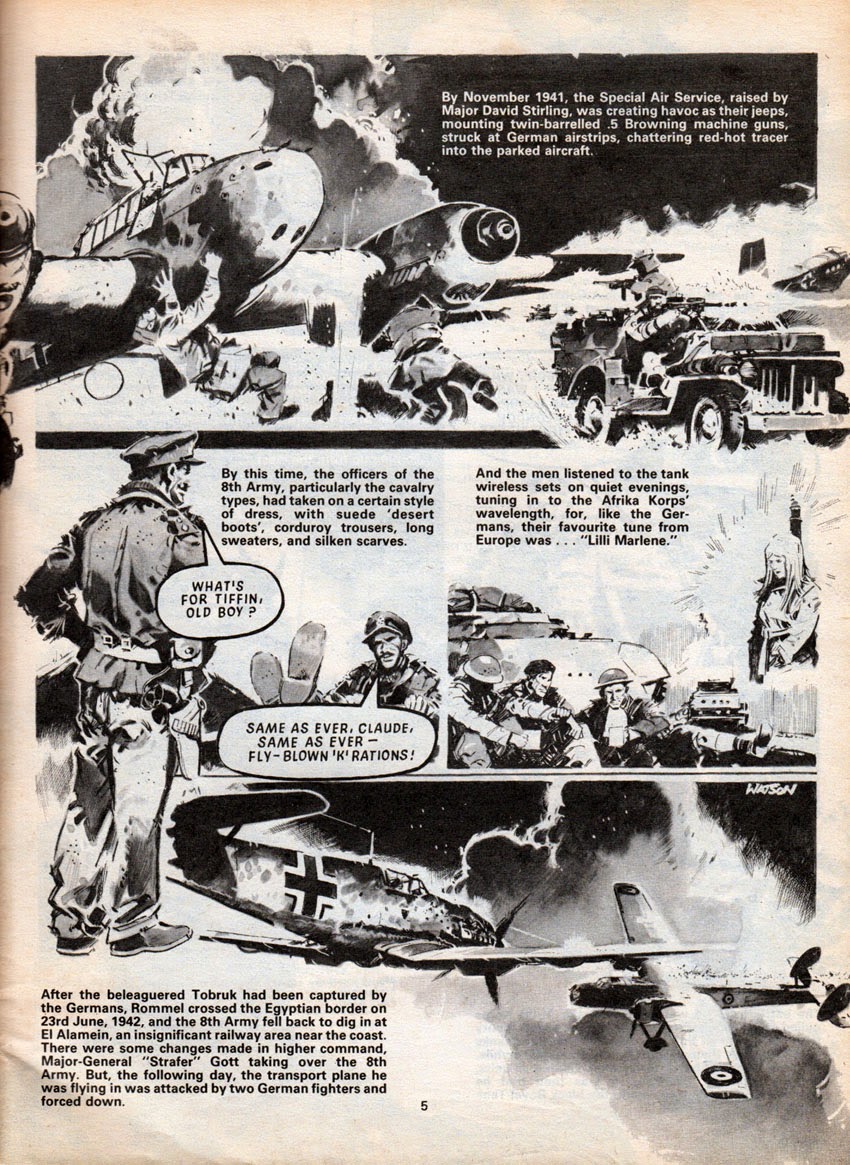 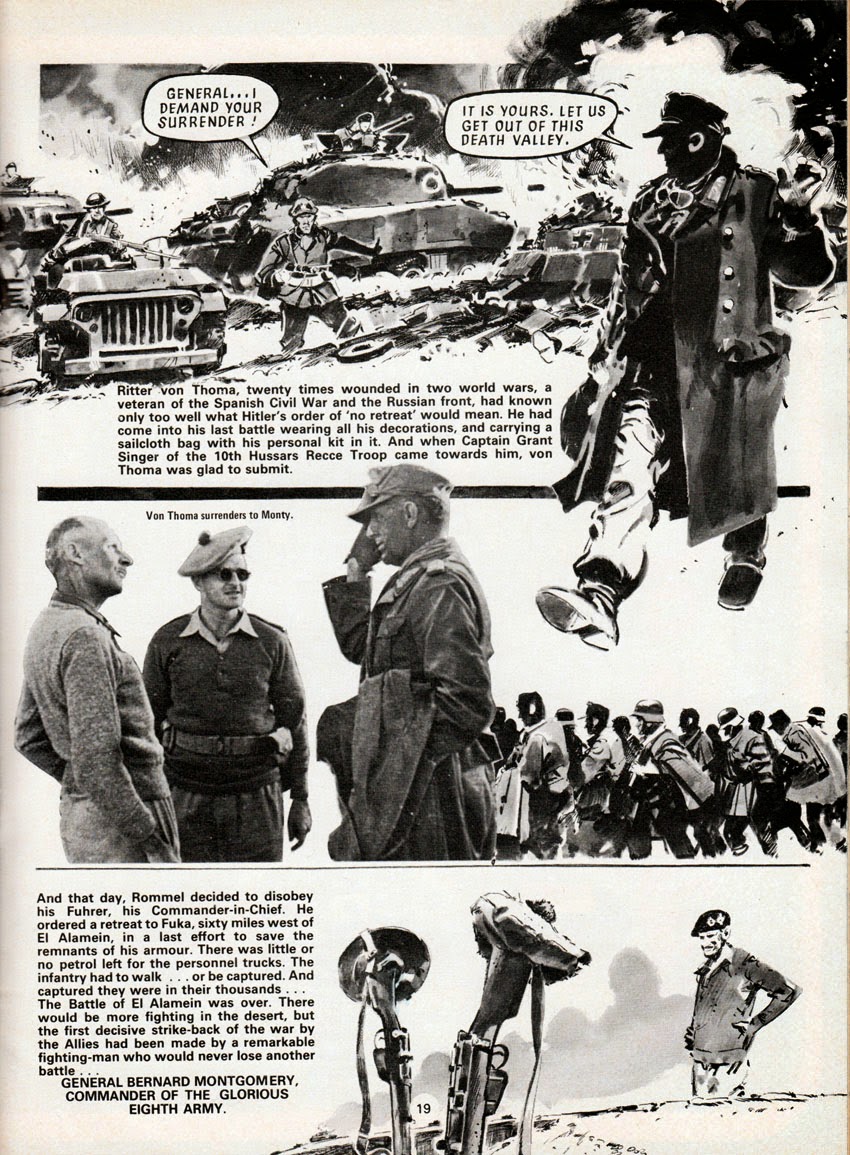 The centre pages of True War were, like its covers, on glossy paper. In issue one the centrespread was used to show two cutaway illustrations of WW2 aircraft... 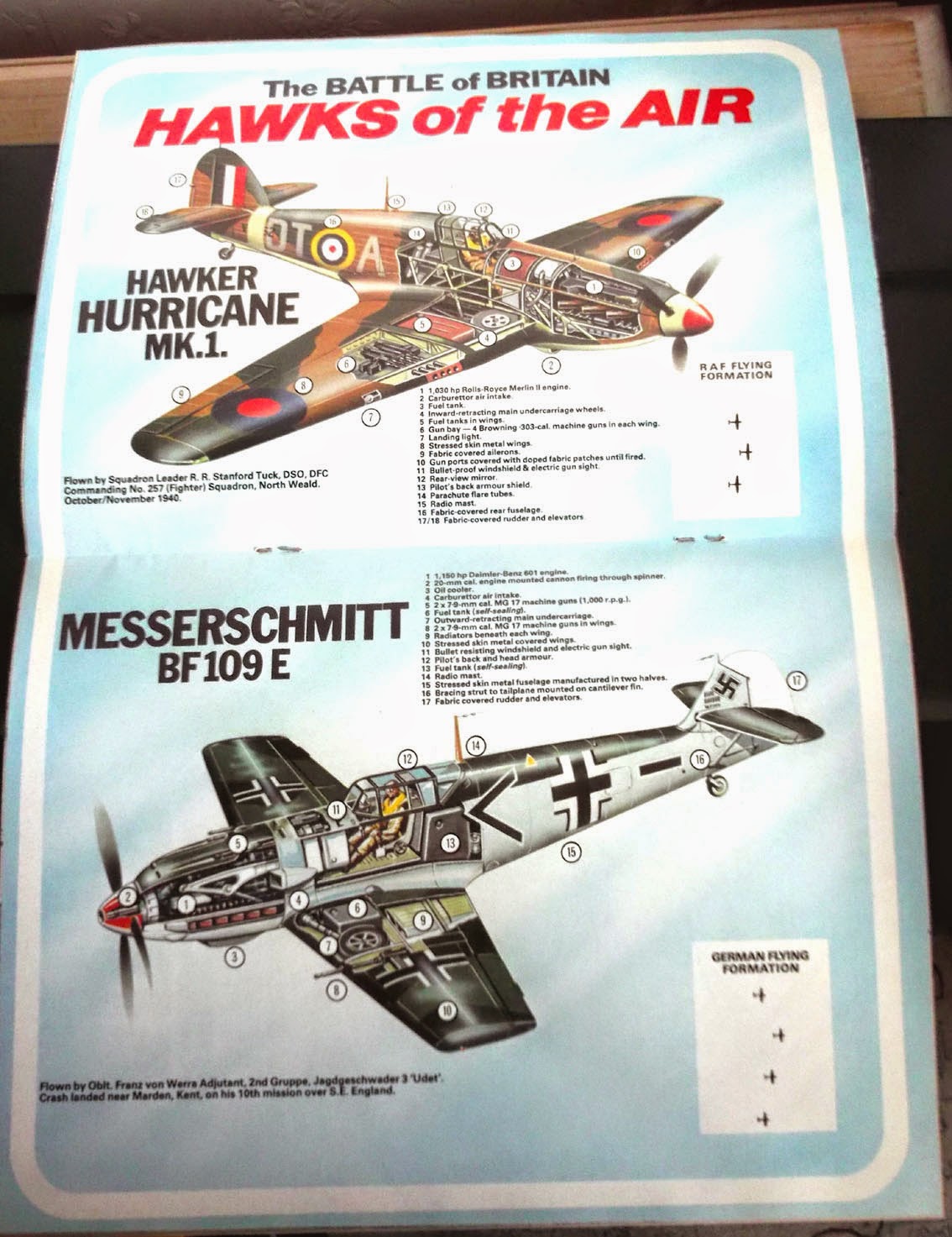 The second strip in issue one was Douglas Bader, Legless Legend. I have to say that even by 1970s standards I found the term 'Legless Legend' pretty tactless, although Bader himself would probably have been amused by it. The comic strip was a sympathetic and respectful tribute to his life, and featured excellent artwork by Ian Kennedy. Here's a few pages... 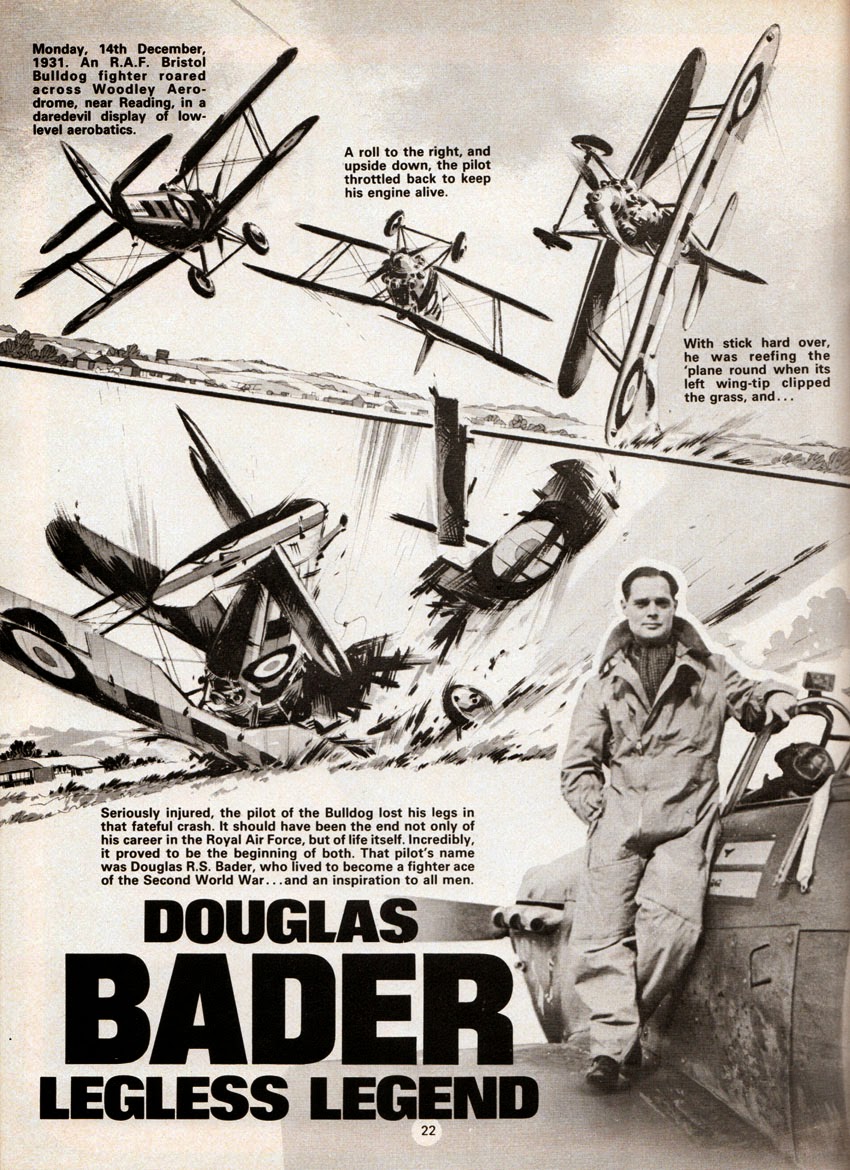 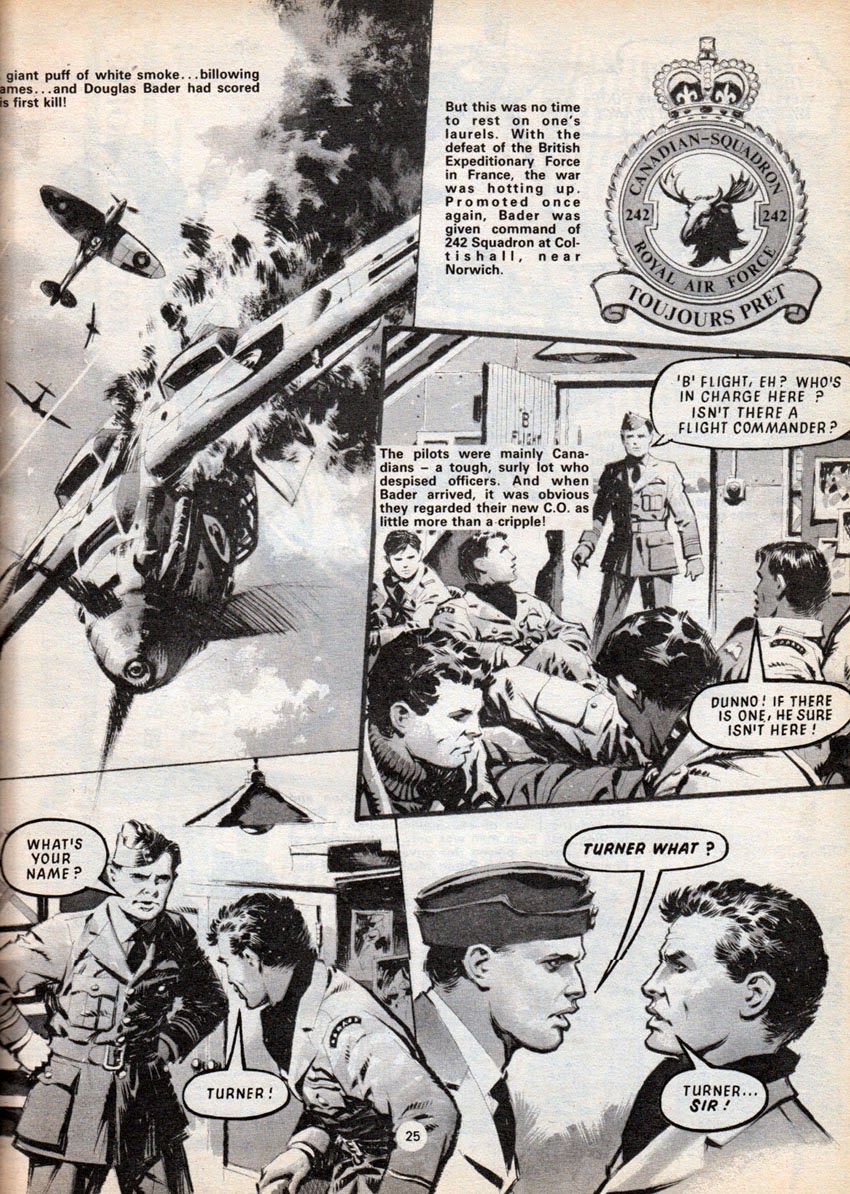 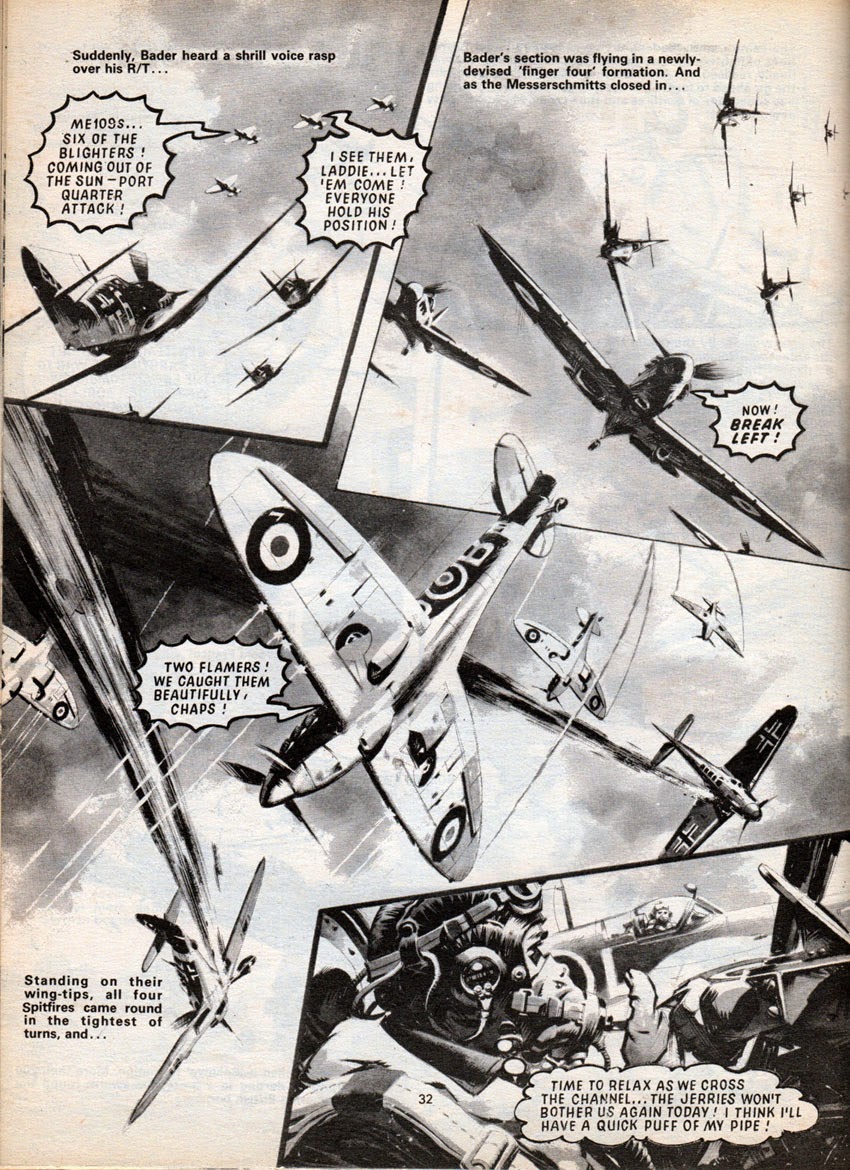 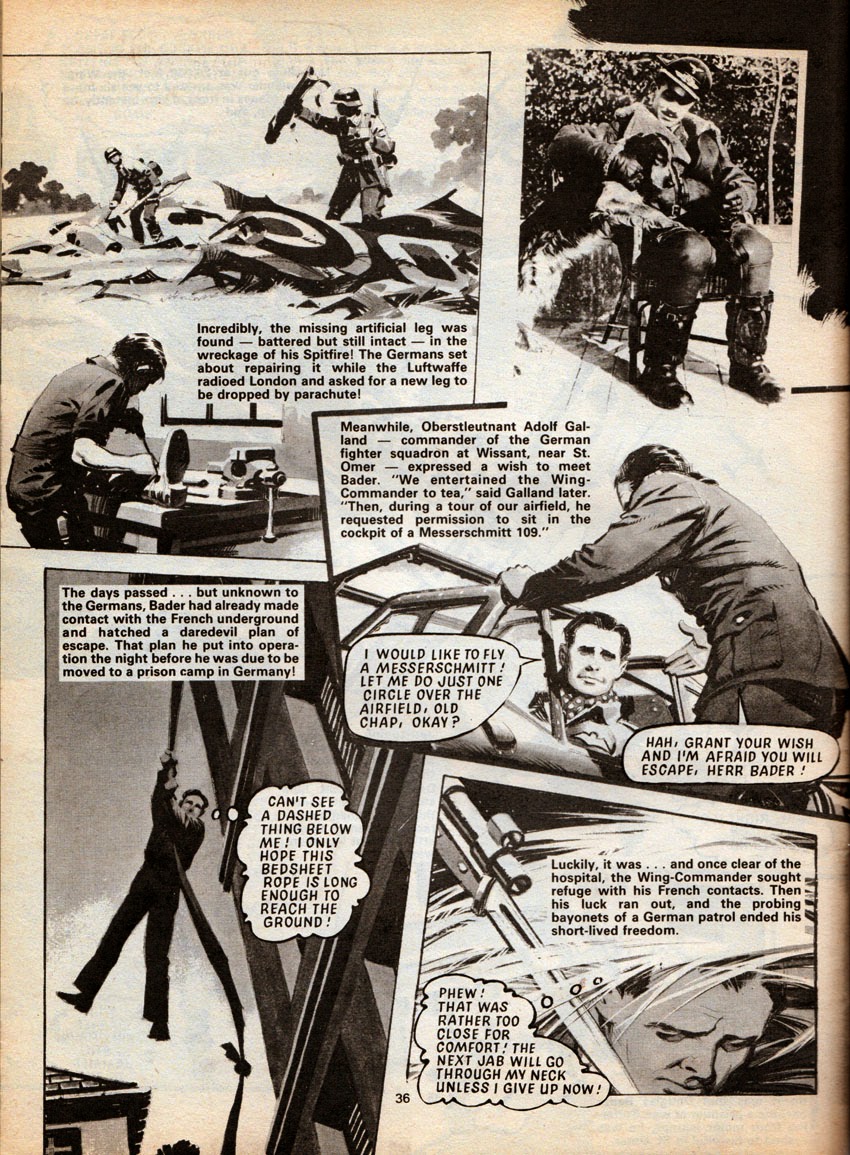 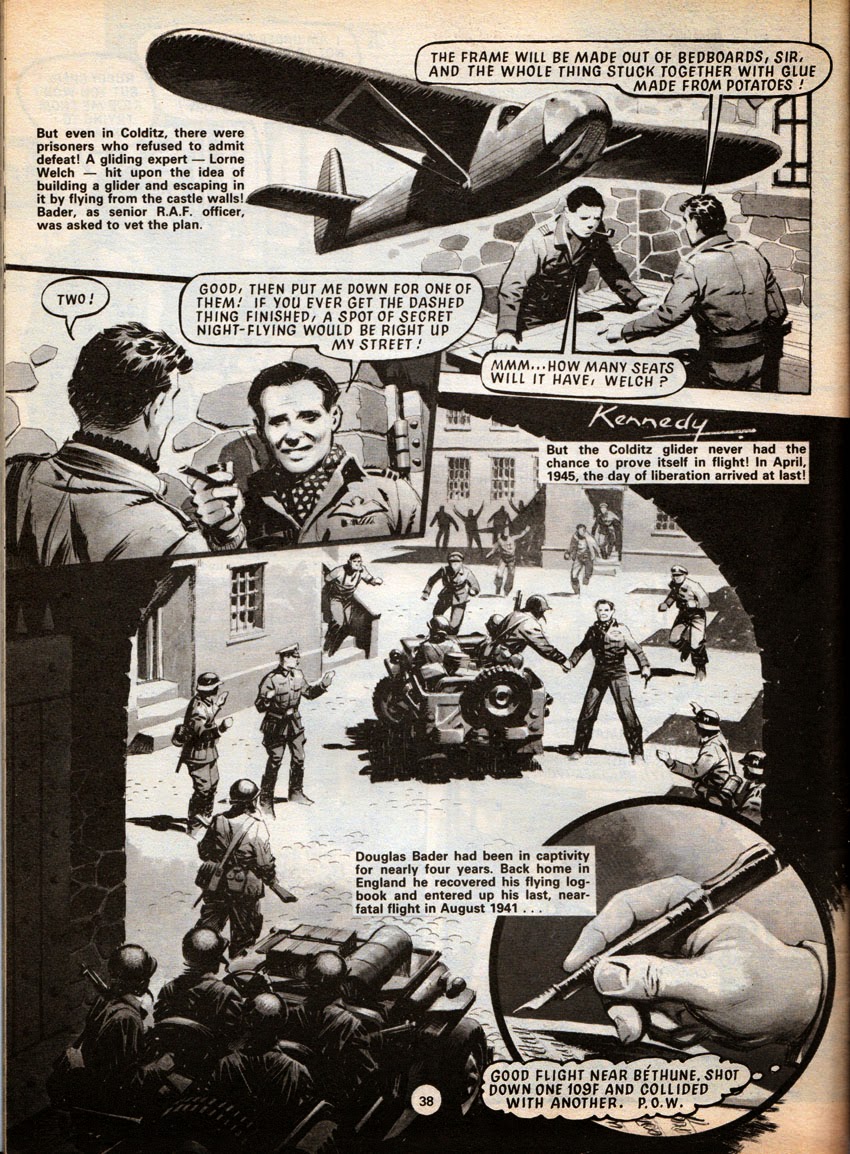 Some of you may have never heard of this comic, which wouldn't be surprising as it ran to a grand total of... three issues. So what went wrong? A few observations and speculations...

It was neither fish nor fowl. The cover design of True War looked like the top shelf sleazy crime mags such as True Detective. My guess is that the sort of readers the cover would attract would be put off to find it was 'only a comic', but the people who read comics would bypass it thinking it was a magazine. Also, that cover image isn't very dynamic is it?

The price! In 1978, 30p was incredibly expensive for a comic. The imported American comics such as Savage Sword of Conan, Eerie, and Creepy may have been around 25p to 30p at the time but they had around 76 pages. True War only had 40 pages and its format was quite small (185mm wide by 250mm high). 2000AD back then was only 9p, with other British comics being around the same price.

The presentation. The idea of telling true war stories in comics form is a good one, and had been employed on the covers of DC Thomson's Victor for years. However, the text-heavy strips in True War really slowed down the narrative, which kind of defeated the object.

Frequency. The mainstream British comic publishers usually shied away from doing monthly comics back then. A senior editor once told me the general feeling was that a weekly frequency maintained the interest, but a four week gap between issues would lose readers who'd forget to keep up with it.

Lastly; distribution. I don't remember seeing True War in many places. Was it well distributed? Perhaps newsagents didn't know where to put it, - next to the comics or up with True Detective etc?

Whatever the reasons for its failure, True War was a worthwhile attempt to attract an older comics reader and it did feature great artwork, so it's worth picking up if you ever come across copies second hand.
Posted by Lew Stringer at 13:36

Well I never saw it either, so ( as I said fairly recently ) it is always exciting when a comic I didn't know of pops up on your blog.
A couple of other short-lived titles which I DO remember are 10-4 Action and Look Alive from the late 70's and mid 80's respectively.

I had both of those mags for the first few issues. IPC really thought Look Alive was going to be a big success but it flopped. As for 10/4 Action... I go by the principle that if I can't say something positive about a comic then I say nothing. :)

A new one on me also but the artwork looks amazing (to say the least) - 1978 and I was probably only into US comics so probably didn't even look at UK comics. Good to see this though a really good idea but looks like it was packaged wrong. Hope you all have a great 2015.

I wasn't buying many British comics then either, except for 2000AD and Star Lord, although I did buy any first issues I saw. Sales on True War must have been bad to end after three issues, despite the high quality of the content.

These days the phrase "Legless Legend" would apply to some yob on a Friday night who could down 20 pints in one sitting.

I came here because of the Myron Fass magazine of the same title that was being published Stateside at the same time! I bet there was a lawsuit.
This is the better concept of the two, however!

I'm not sure there'd be a lawsuit as I don't think the copyright of a magazine title in one country would be infringed by a publication in another. If either publisher wanted to export their mag to the other country it'd be a different matter of course.

Just thought of an example. In 1978 IPC had a Star Lord comic at the same time Marvel in the USA were publishing their Starlord titles but no lawsuit transpired.

Still, I wonder if both companies would have benefitted from an alliance. Fass would take the example from Charlton and reprint the IPC comics for the American market, while IPC could use existant Fass content to fill out page counts and save a little on production costs. I guess such a thing would only be clear in hindsight.