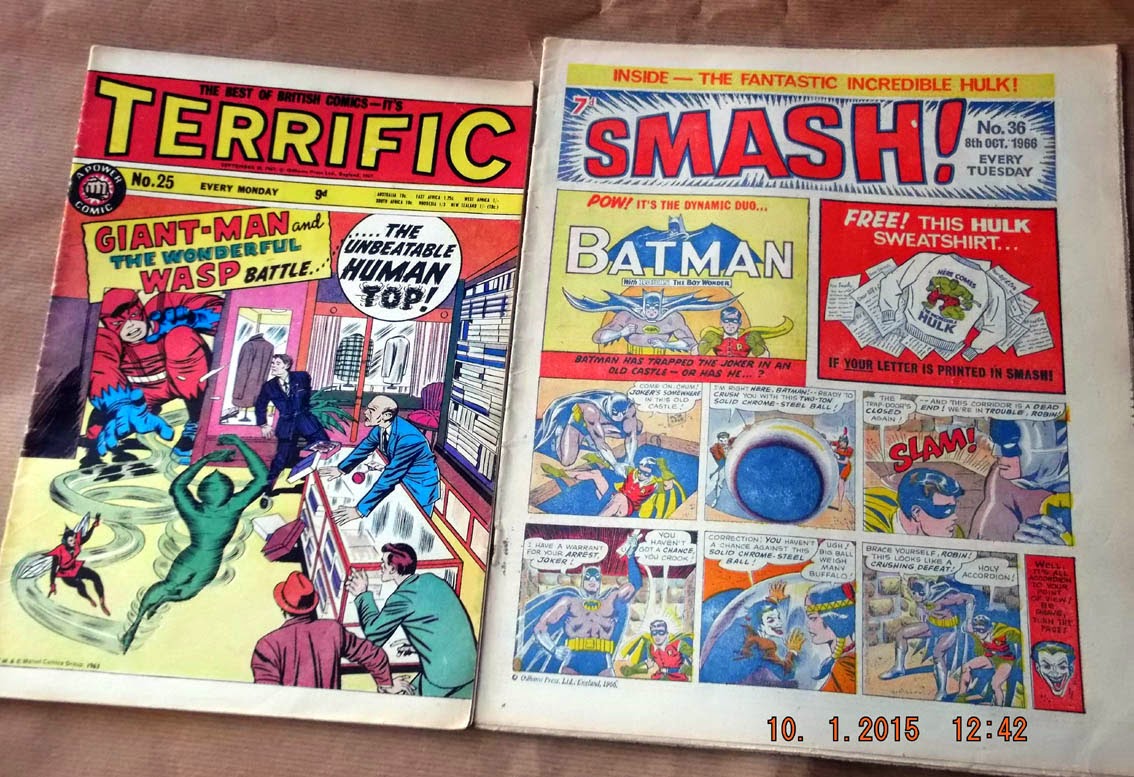 Compared to American comics, crossovers in British adventure comics are fairly rare. Of course the strips in TV21 inhabited a shared universe, as do several of the strips in 2000AD, but it was very uncommon for a strip in one comic to link to a different strip in another title, especially in the 1960s.

However in the mid-sixties, Smash! and Terrific did just that. Obviously the Marvel reprints they used were doing it all the time, but two of their originated British strips also had a connection.In Smash! No.36 (dated 6th October 1966) the evil Doctor Fear apparently met his demise in the Rubberman strip (art by Alfredo Marculeta). "This time there was no doubt." a caption told us, "Doctor Fear would never again bring terror to mankind." 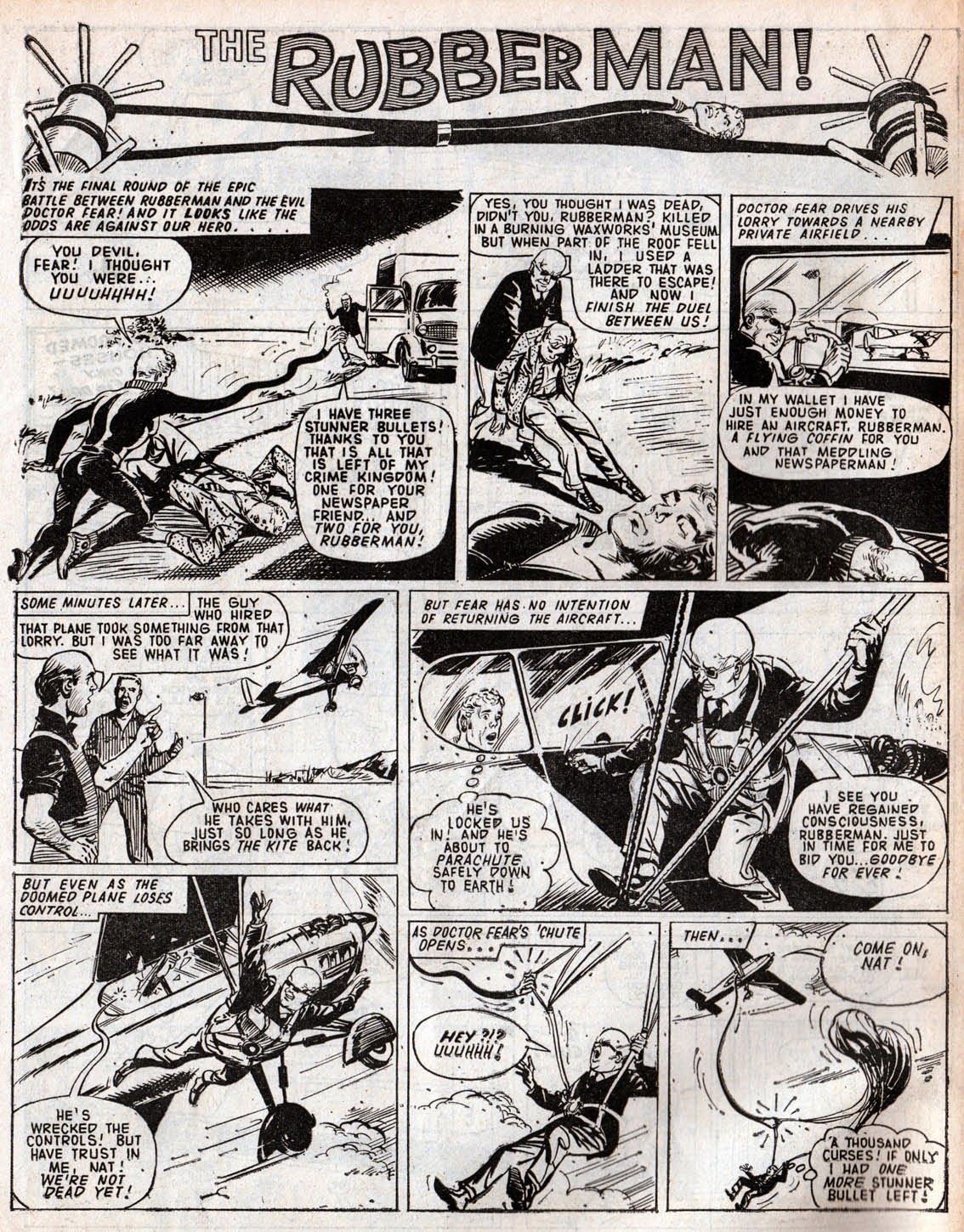 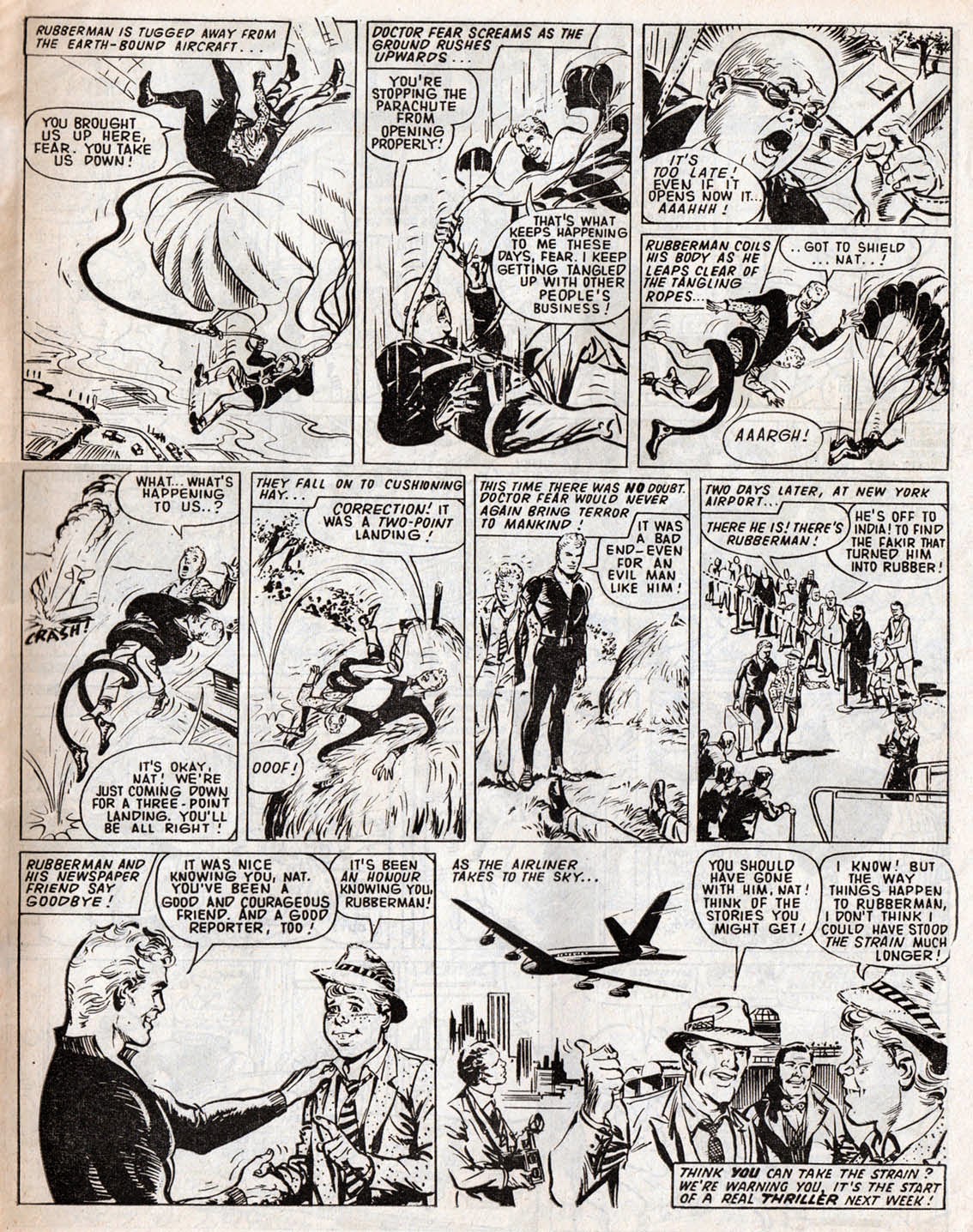 Surprisingly a year later in Terrific No.25 (dated 30th Sept. 1967) who should turn up in the Appointment With Fear series than - Doctor Fear! With a flashback sequence to that Rubberman strip and an explanation as to how he survived... 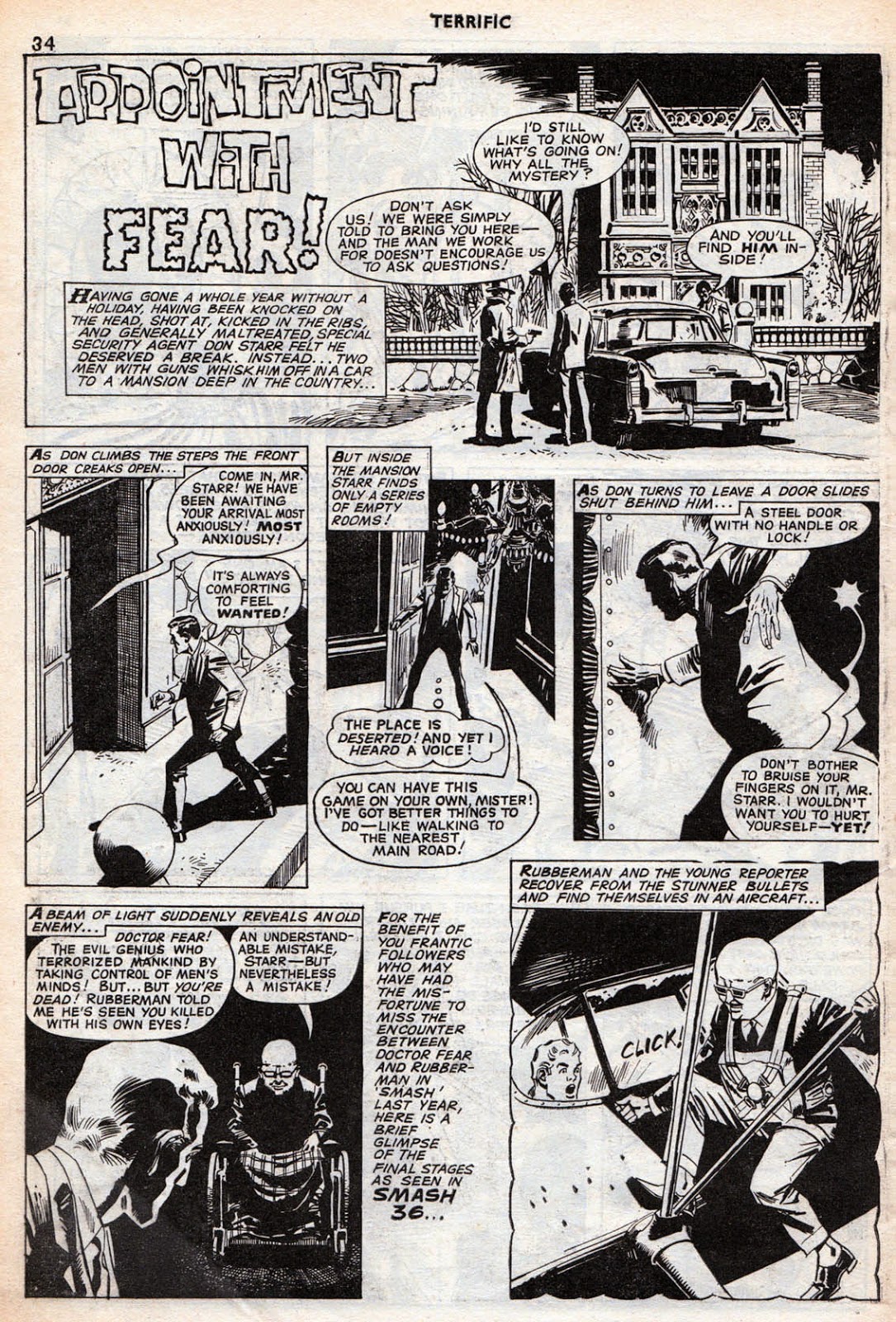 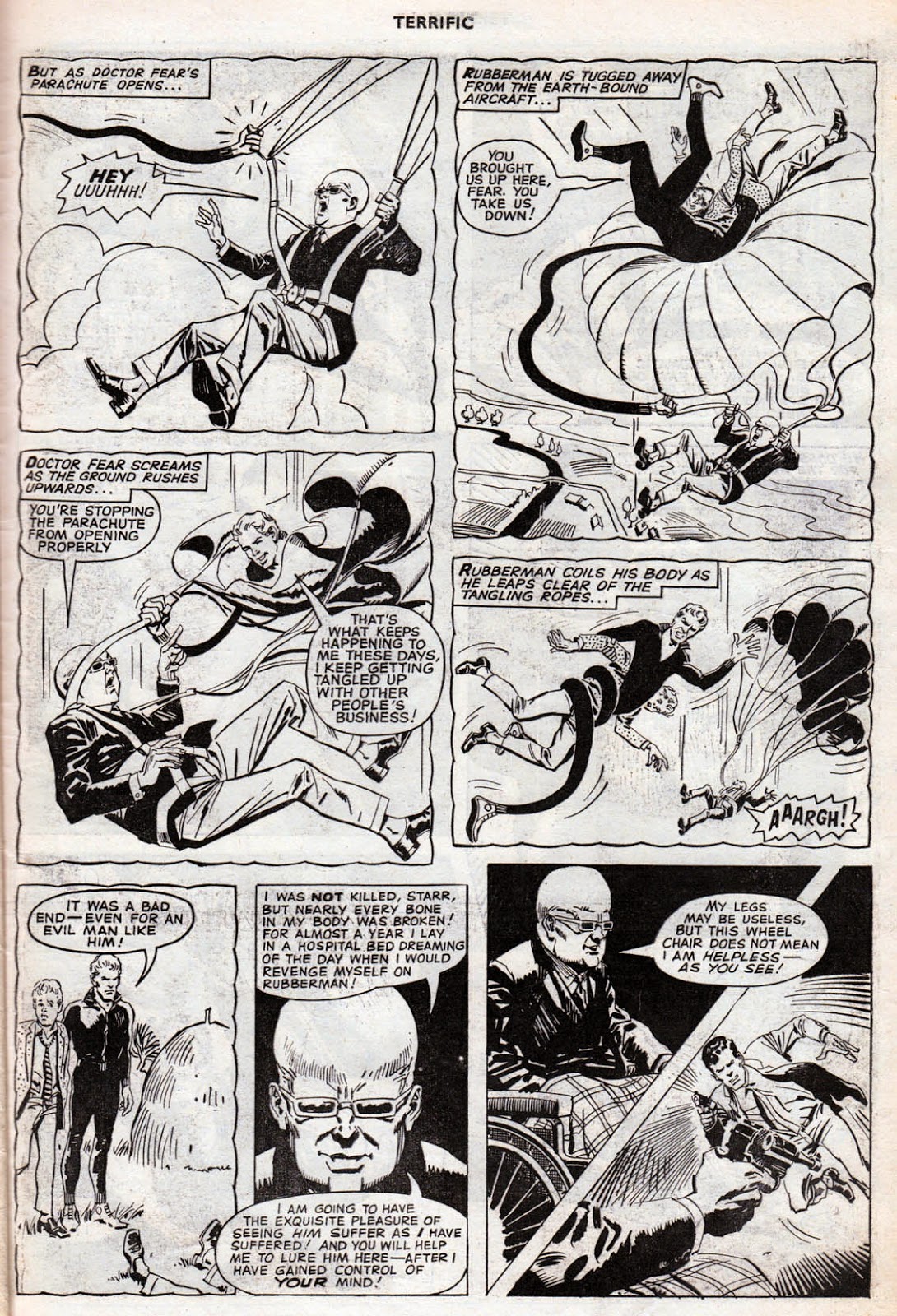 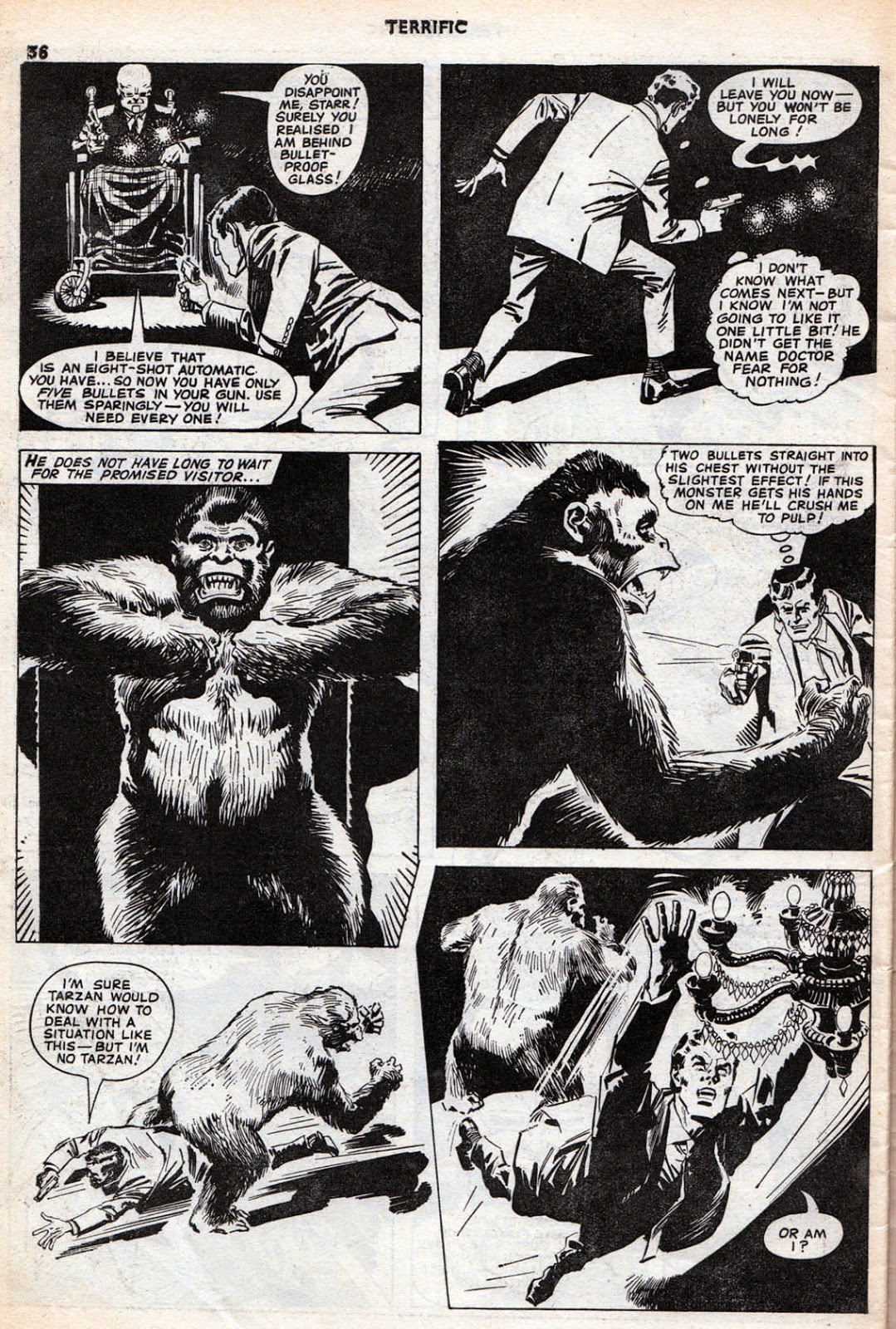 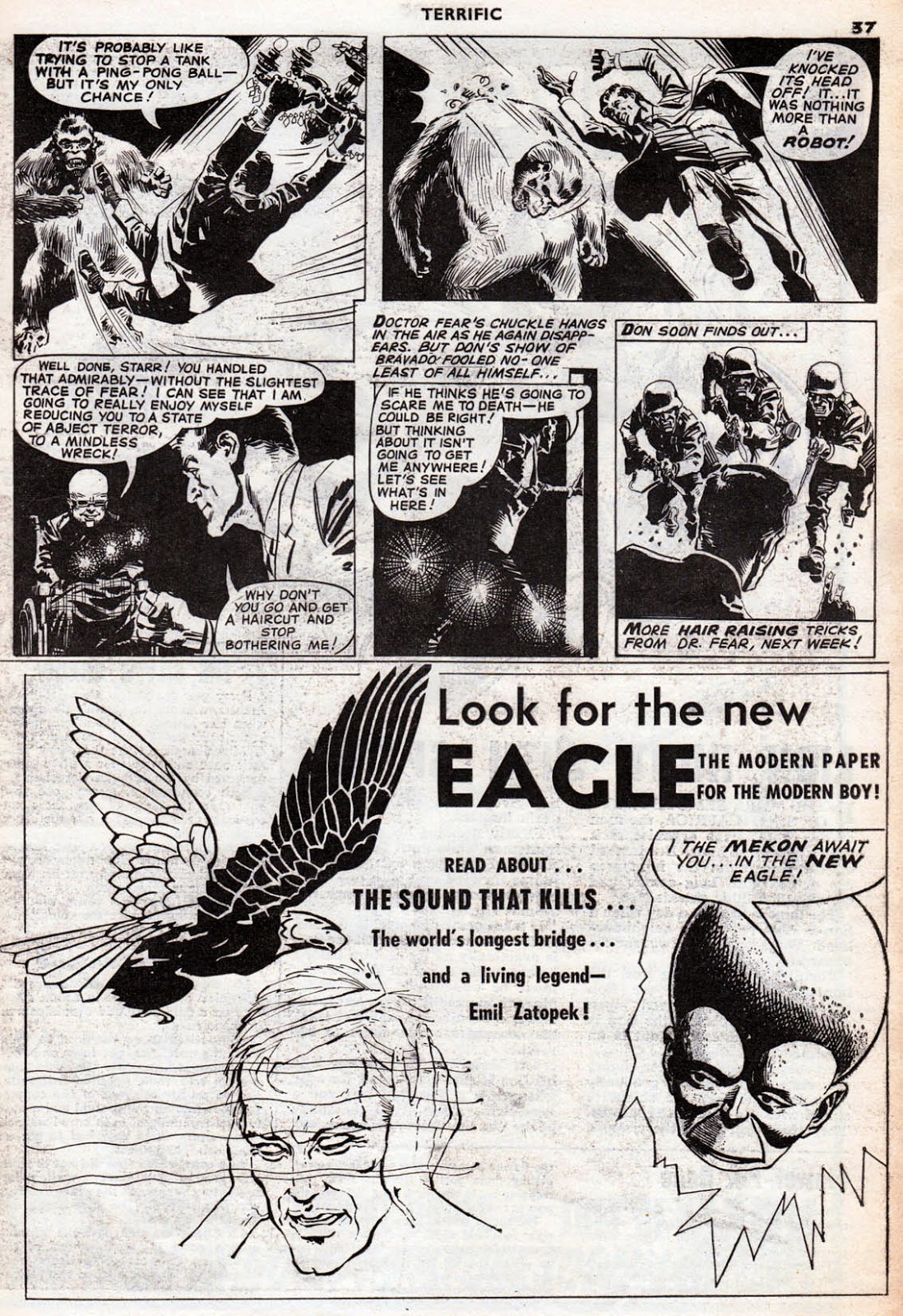 But there was another twist. A few weeks later in Terrific No.28, it was revealed that it was only someone impersonating Doctor Fear in an elaborate ruse to test the story's hero, Don Starr! "I'm sorry about the Doctor Fear act - but I had to be certain you didn't scare easily!" says Jermyn Forster. Then Don Starr has his head turned by the imposter's pretty secretary and he's off on another adventure. 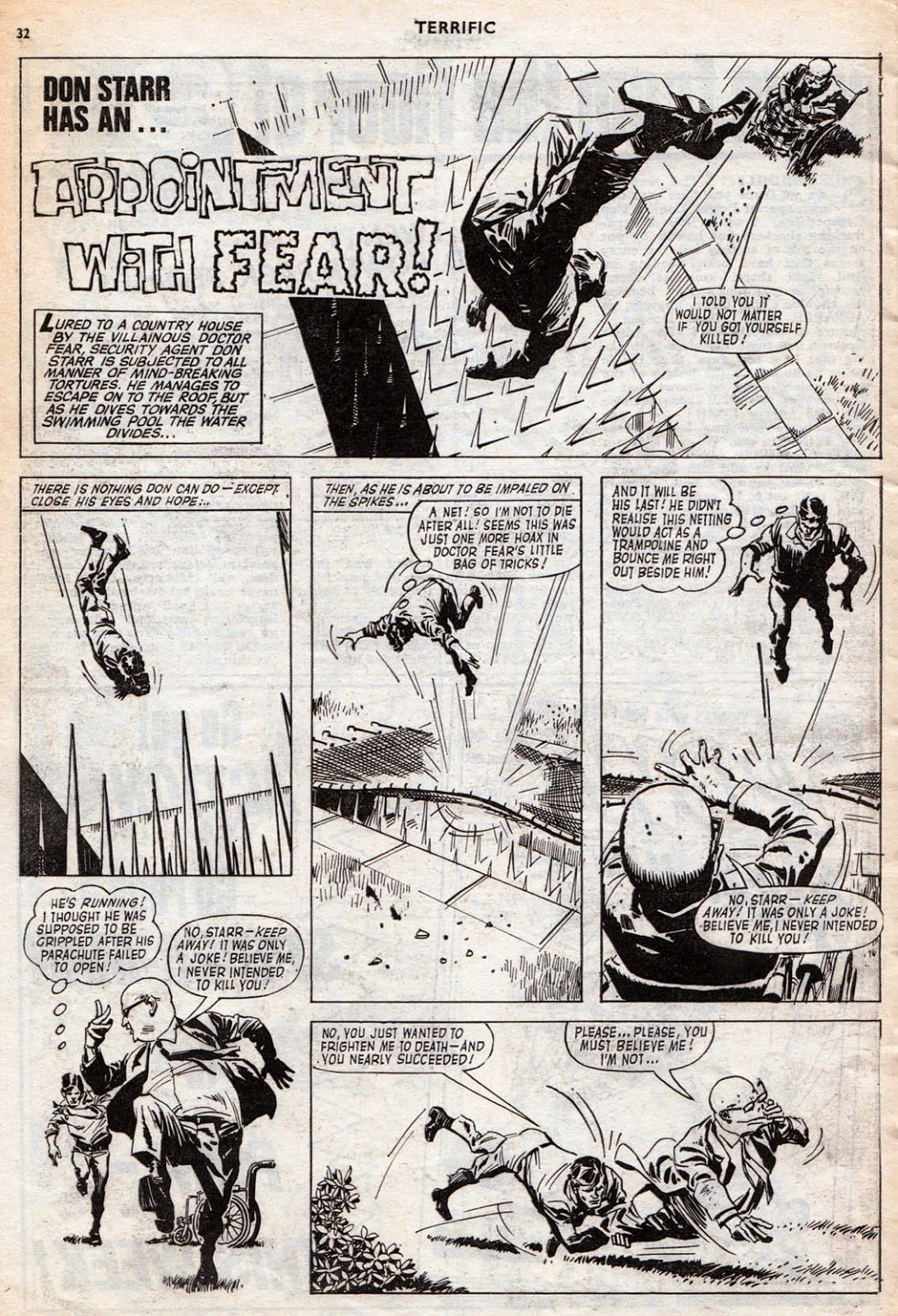 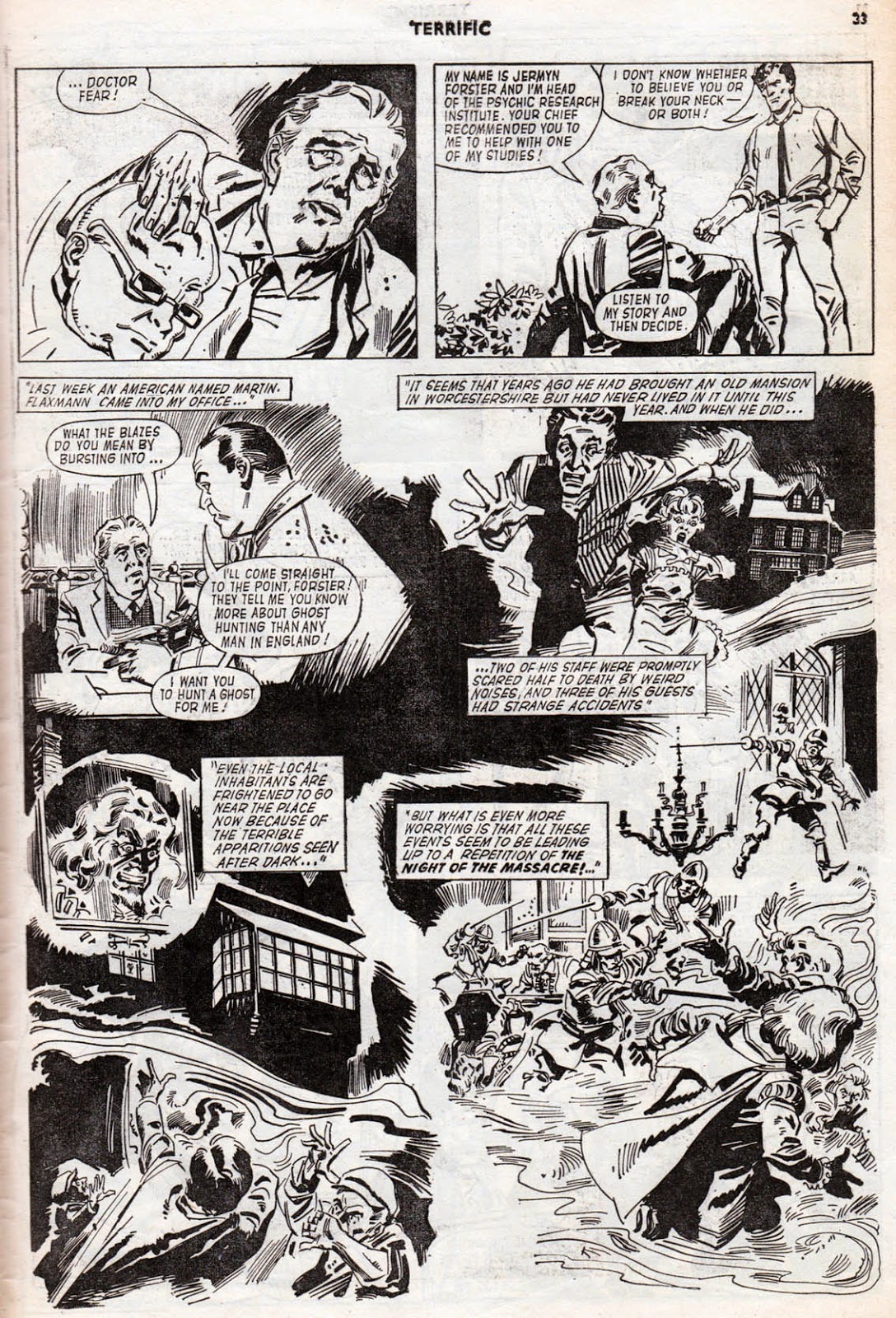 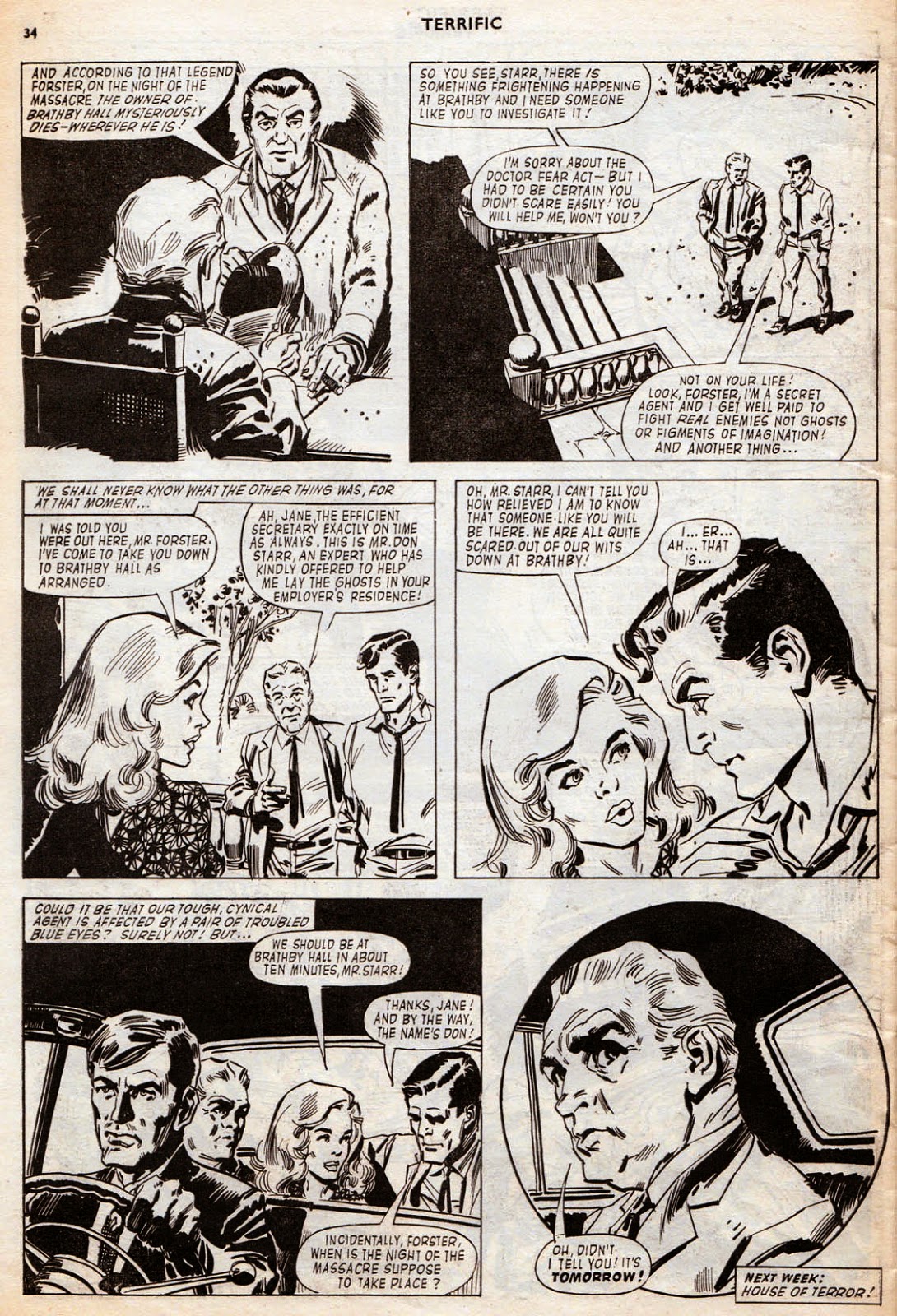 As much as I like those comics I have to admit that this was an example of British comics at their silliest. Was the revelation of Forster as an impostor planned from the outset or did the scriptwriter just make it up as he went along week by week? Who knows? But at least it ticked the boxes to be an exciting serial and the artwork was suitably dramatic. 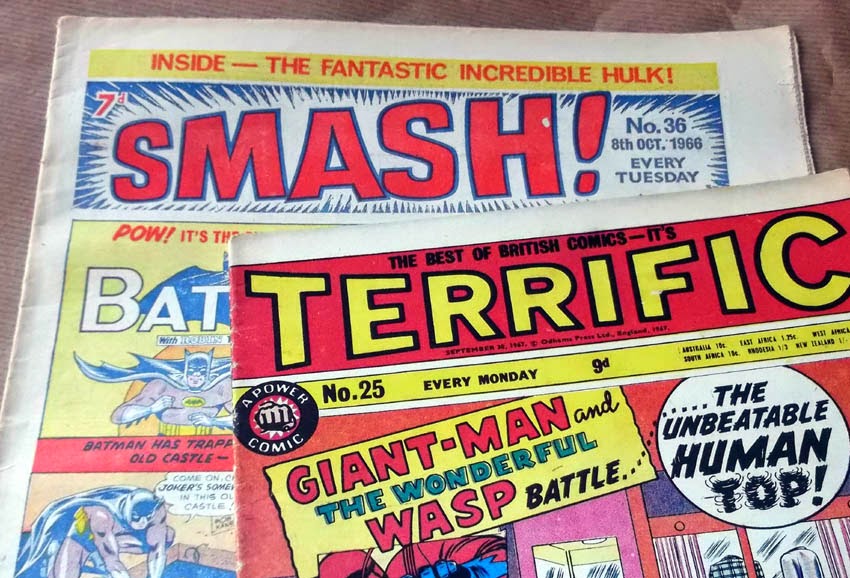 For comics that are nigh on 50 years old they look in remarkably tip top condition. Are they restored?

No, just well looked after. The first copies I had as a child became quite tatty but I bought these replacements in the early 1980s. The original owner had obviously cared for them and I've continued to do so. If you keep comics out of direct sunlight and at room temperature it preserves paper fairly well.

This is just the best blog ever. Keep up the good work Lew.

I remember the Rubberman strip ,Lew ...but I always thought it was a bit of a rip off...what with Plastic Man , Mr Fantastic and even the Elongated Man working that territory already, I felt we didn't really need another stretchy hero. I did enjoy the Power comics line , as I've said before , because they took Stan Lee's dictum of involving the readers with the inner workings of the comic...

I didn't know about the American characters when I read the first Rubberman stories so to me at the time he seemed very original. I still like the strip today though. The artwork was very lively even though the scripts insulted the reader's intelligence sometimes.

Yes, that friendly attitude the 'Power Comics' had, taking the readers behind the scenes really worked didn't it? I was somewhat disappointed when IPC used phony office boys such as 'Mike' or 'Pete' to introduce the later Smash and the new Scorcher. Even as a kid I knew their anecdotes were as fictional as they were.

I too didn't discover the US stretchable heroes until after Rubberman, who was one of my favourite UK Smash strips, another being Brian's Brain.
Although I had every single issue of Terrific, I cannot remember Dr. Fear in Don't Starr. Perhaps I just skipped through that strip, as I had all 5 Power comics to plough through every Saturday afternoon at that time!

Crossovers are rare in UK comic, and when they happen are great fun, as a kid the story takes a back seat a little!
I loved the 2000AD efforts, Archie in Zenith, I wish they has spun that off,20000ad was starting its fallow period it had potential. Kellys Eye was another missed opportunity in 2000ad, well drawn though!
.

One that springs to mind is 'Masters of Menace' in Lion in the early seventies, which teamed up the bad guys from the earlier 'Shadow of the Snake' and the White Eyes serials. Great stuff.