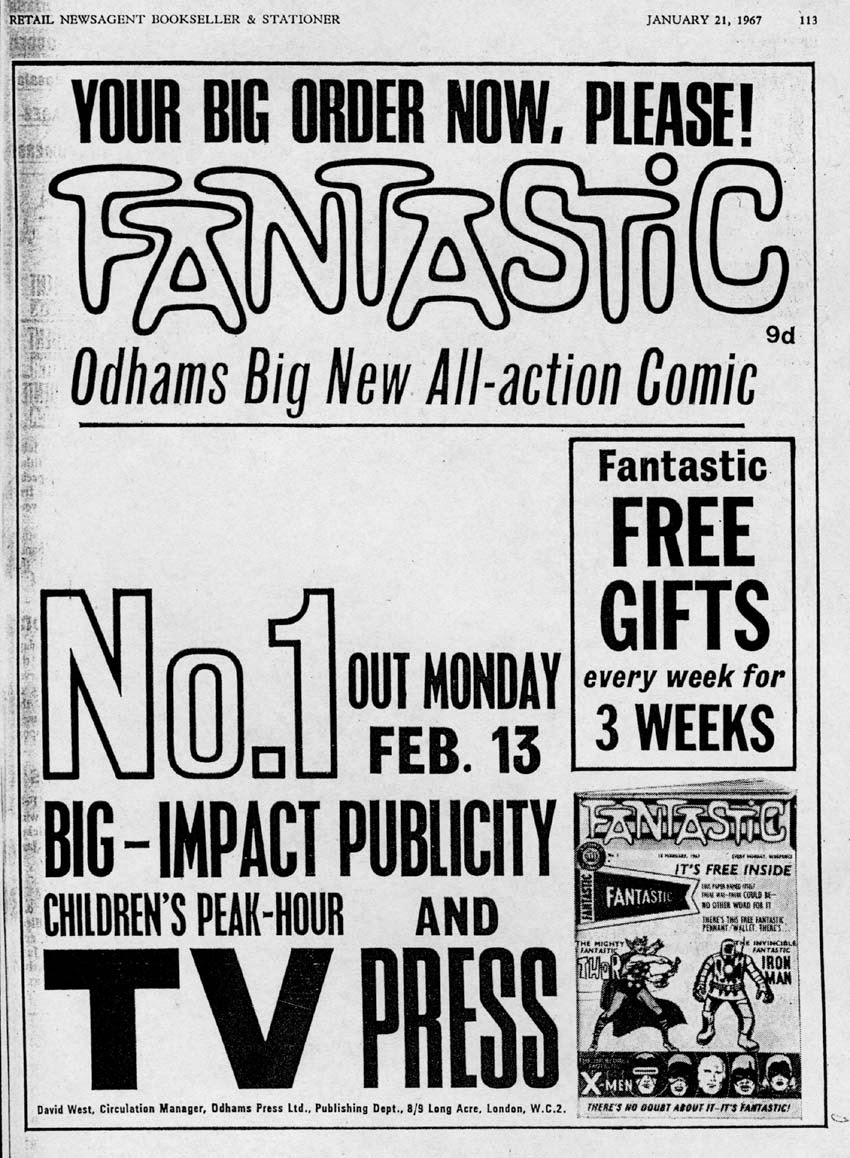 My thanks to Shaqui Le Vesconte for discovering these ads for 1960s comics that appeared in the magazine National Newsagent Bookseller Stationer for the retail trade. I've always been fascinated by stuff like this; the way comics were promoted to retailers in adverts that we as readers would never have seen. 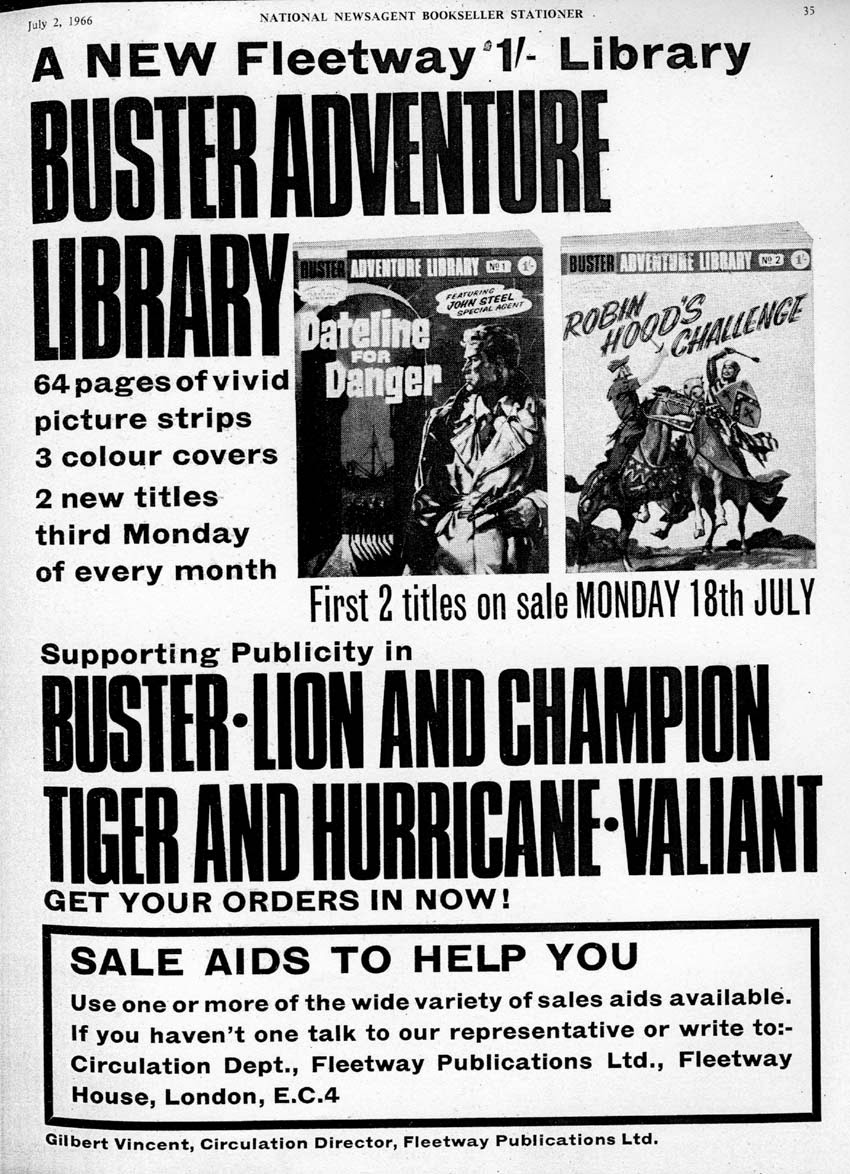 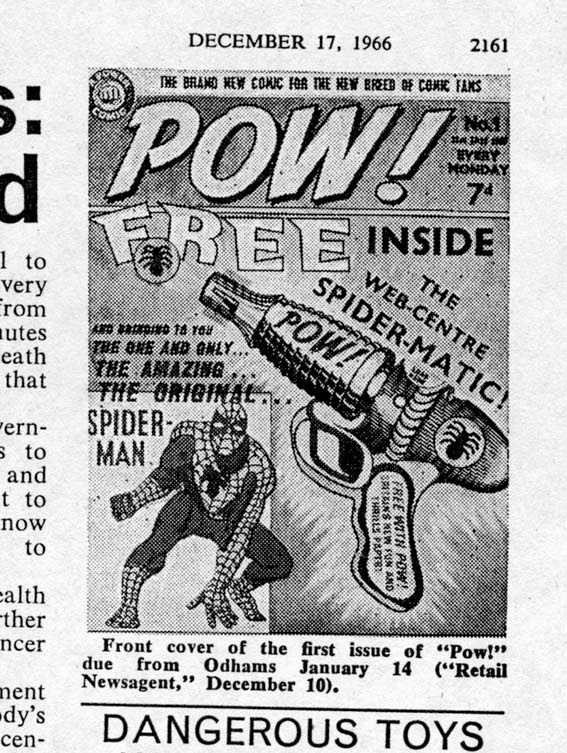 The ads speak for themselves so I'll post them without comment, - except to say that promoting "The comic the children have asked for" with what might be perceived as a picture of a naked man with a logo covering his modesty might not have been the wisest choice. (Yes, we know it's the Sub-Mariner and he's wearing trunks behind that banner but would the old lady running the corner shop know that? Still, it was the 1960s. Crazy times, man!) 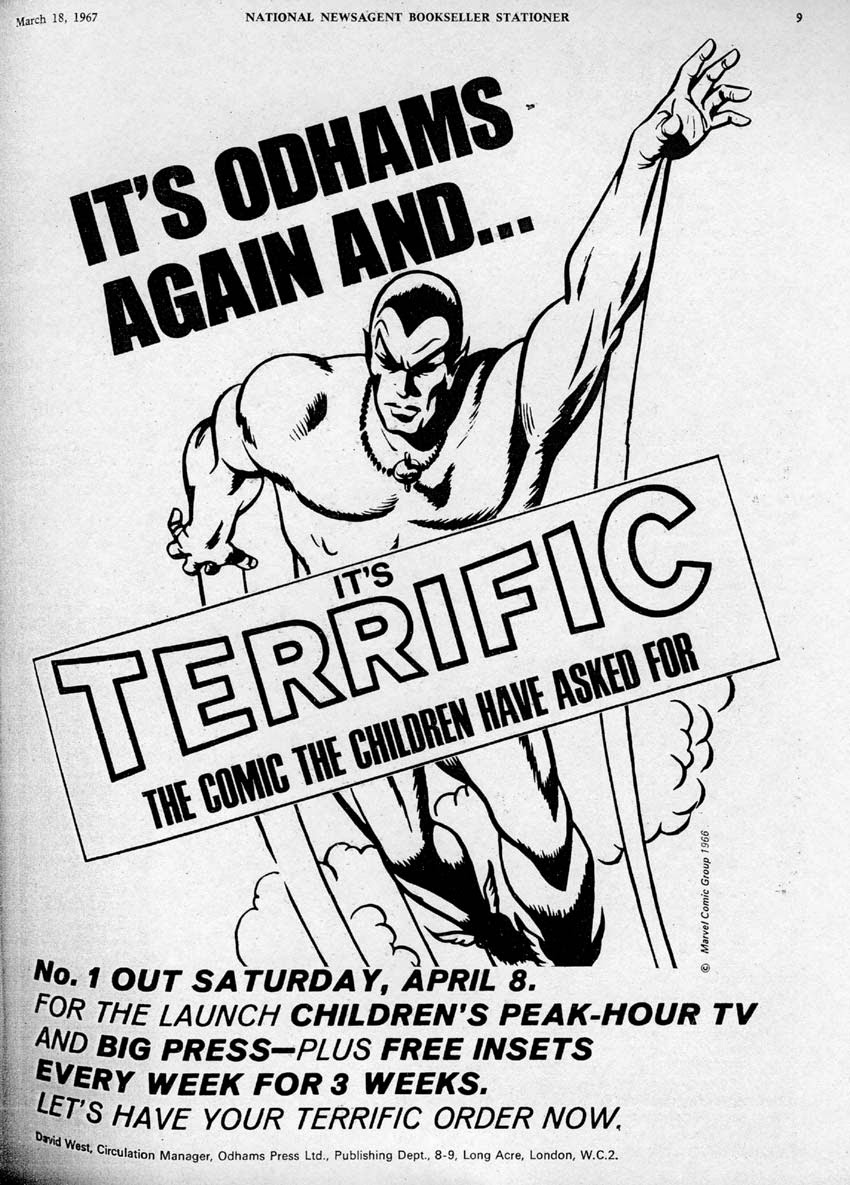 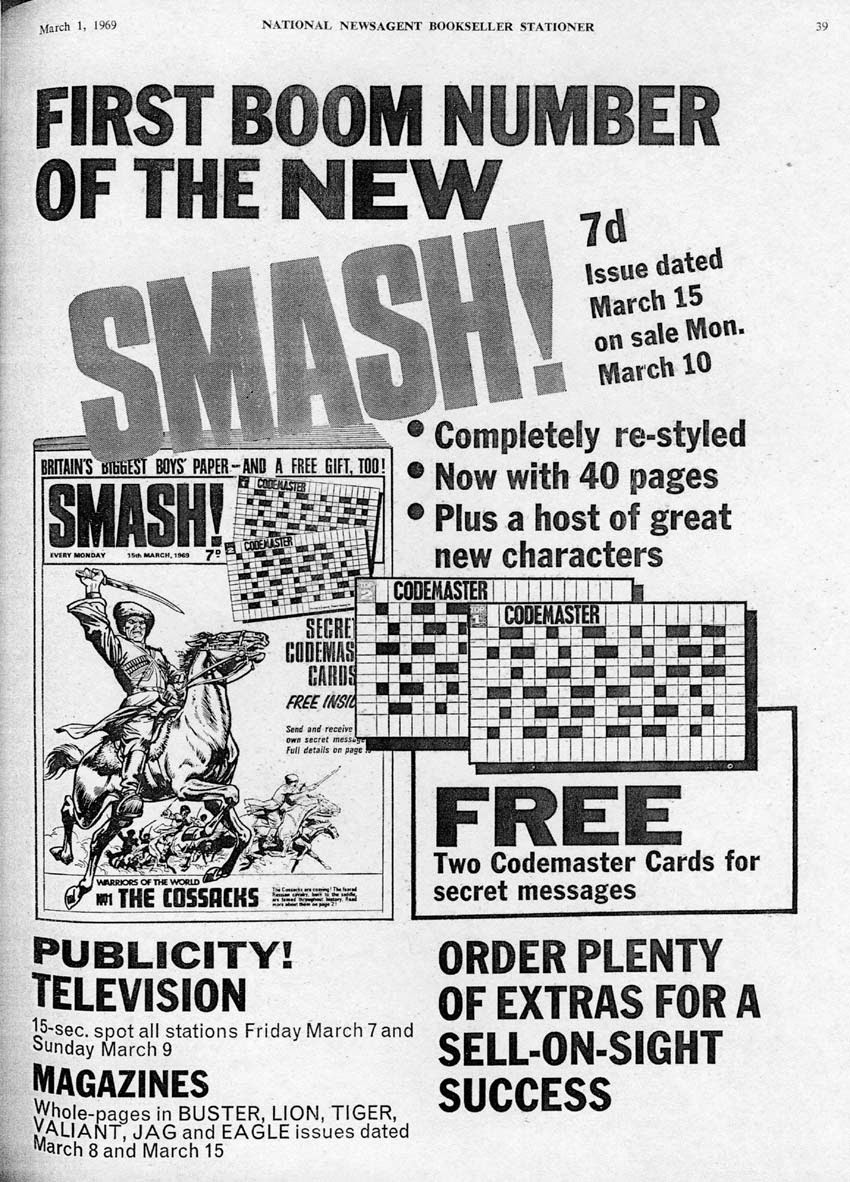 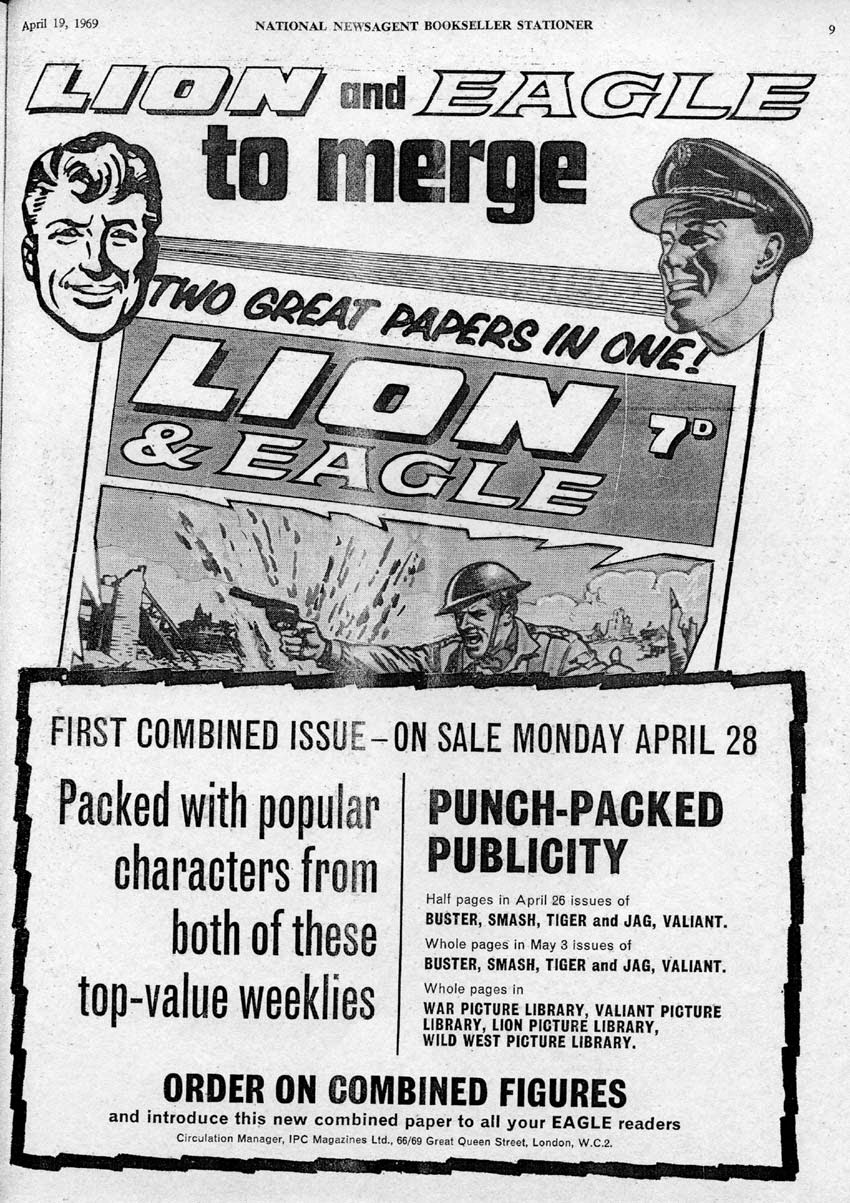 These are really great what a fantastic find. Nice to read that the Odhams books were advertised on TV at childrens peak viewing times, sadly I do not recall them at all (I only have a passing memory of Mighty World Of Marvel, Thunder, Jet and IPCs Smash being on TV in the 60s mid 70s)

I never saw the TV ad for Wham! but I did see all the others, except for the one for Mighty World of Marvel. It came as a pleasant surprise to see issue one of MWOM in a newsagent.

Free gift issues would also be advertised regularly, prompting a rush up to the corner shop to buy a copy. (Free gift issues invariably meant new stories would begin in that issue so it was a good jumping on point.)

I'm sure those TV ads must exist in some archives. It'd be great if they could be compiled onto a DVD, or as extras at the back of some sixties/seventies theme DVD.

I remember the adverts on pink paper are these them?

I wonder if any of those TV ads are on YouTube. I remember the ad for Super DC on the telly.
Anyway, Lew, if you get any more, please show us.

while it's often... a point of view, I always laugh at adverts like that last one.. trying to say both Lion and Eagle were great top selling titles? if that is the case.. why do you need to merge them into one comic?.. did newsagents really buy into a lot of that? also a nice look at a world were newsagents weren't mostly part of a franchise chain (or just had a main supplier that gave it stuff regardless unless specially ordered).

I still remember getting some old comics ordered from the newsagents so they get the one issue specially for me.. (and being in a small town with small shops more then days (well, outskirts of town), I was pretty much the only one that order it from them... sigh.. not the best of times but.. simpler with a number of good things..

Anon, no these are ads that only appeared in magazines for the retail trade. Special magazines that told newsagents what was coming out so they could place orders for stock.

John, the only TV ads I've found on You Tube for comics are for 2000AD No.1, Judge Dredd Fortnightly, a Dandy one from about 20 years ago and a few ads for Look-In.

Yes, Manic, strange to try and kid the newsagents when they'd be the ones sure to know that sales of merging comics were not great.