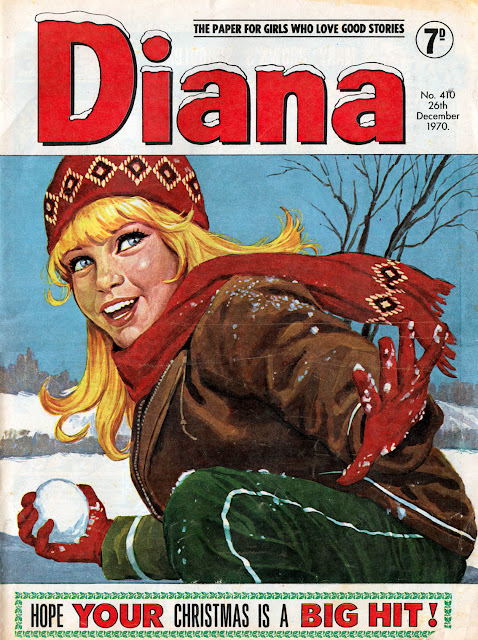 Some Christmas comics had promising covers but didn't deliver much in festive stories inside, so I thought I'd group a few together in one post. We start with the Christmas issue of Diana from 1970, above. I don't know who the illustrator is (can anyone help?) but it's a fantastic piece of artwork.

Inside, the only Christmas themed strip was a humour one; Up-To-Date Kate. Looks like the artwork of Michael Barratt to me. 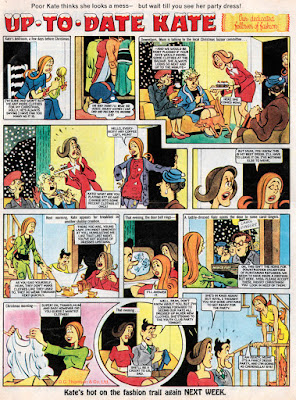 On the back page, another festive strip; Rosie Red Riding Hood. 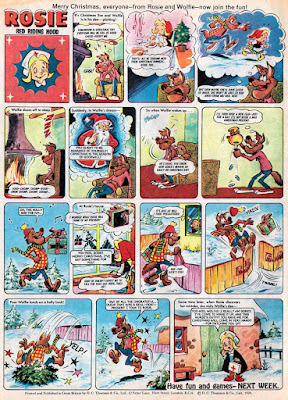 A few years later, the issue of The Wizard dated December 25th 1976 promised a "ghostly tale for Christmas". 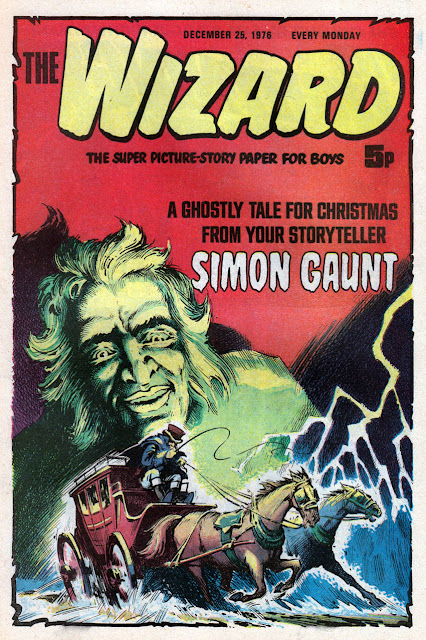 Inside, the story the cover related to, The Lightning Tree, actually had no festive element, but telling a ghost story was an old Christmas tradition so it was quite appropriate. 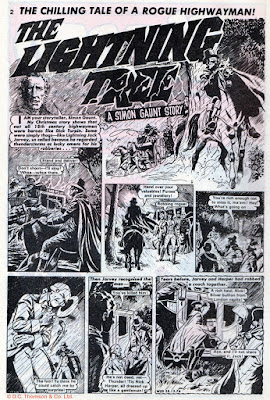 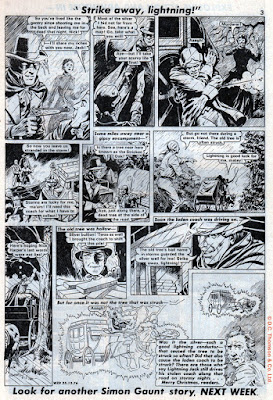 The back page of that issue of The Wizard was certainly festive, with the Christmas Crackers feature illustrated by Andrew Christine (later to draw the popular newspaper strips Beau Peep and A Man Called Horace). 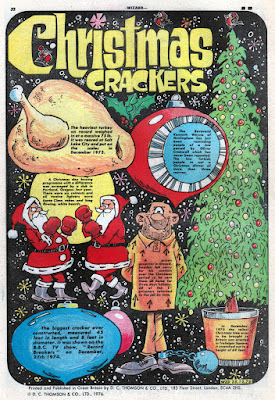 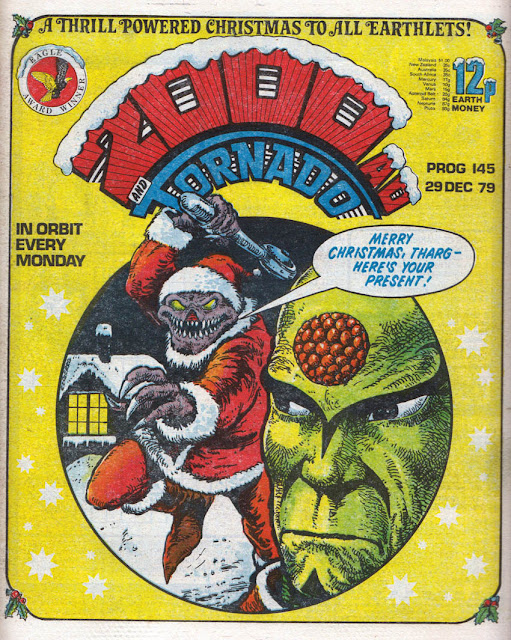 Seven stories in that issue, but only one relating to the season: Tharg's Christmas Tale, again drawn by Ezquerra... 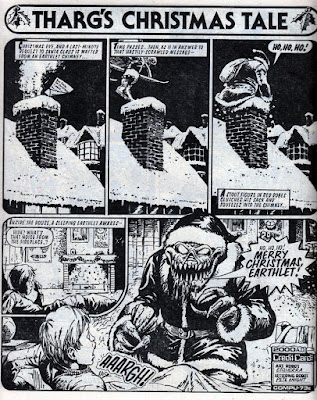 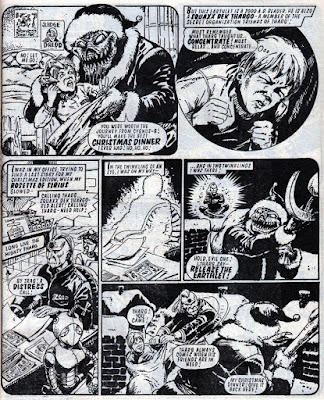 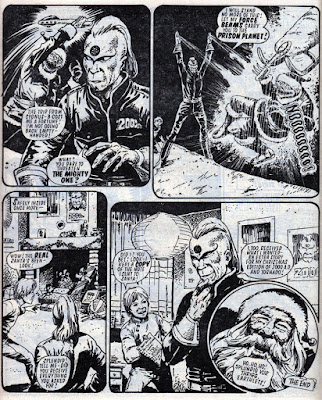 In 1982 the Christmas issue of Buddy featured Billy the Cat in a Santa outfit, delivering presents. Despite this, none of the interior pages had a festive theme. By the way, if you're thinking the "great news" announcement heralded a merger you'd be mistaken. It referred to Buddy getting a new look and a couple of new stories with the next issue. 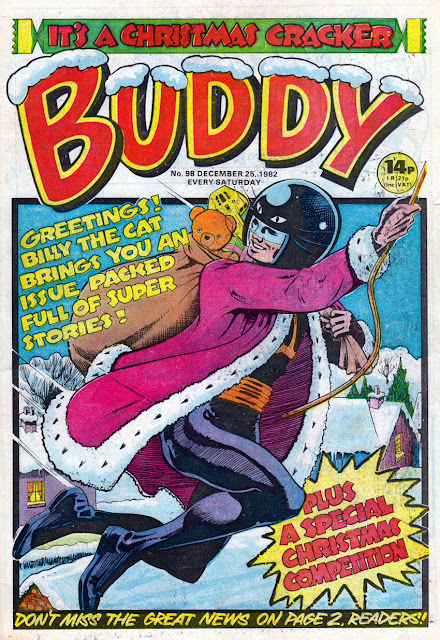 A year later, the 24th December 1983 issue of Spike featured Charlie 'Iron' Barr dressed as Santa but there was little in the way of festive cheer inside. (I'll be taking a look at other issues of this comic soon.) 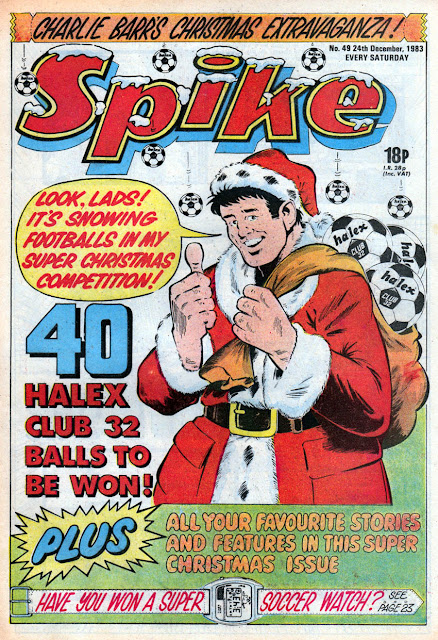 Christmas Day is fast approaching but there's a few more old Christmas comics to feature yet. Look out for another post soon!
Posted by Lew Stringer at 00:05

Good stuff Lew! I've got one christmassy cover to offer myself - haven't written a post for it yet but I've got this issue of Jinty on my pile to blog about:
http://www.catawiki.com/catalog/comic-books/series-protagonists/the-kat-and-mouse-game/3186221-jinty-34

It's got a lovely Christmas cover, a Christmas contest, and about three of the stories are Christmas-themed. "Dora Dogsbody" features a dog who is giving Christmas (food) presents to needy fellow canines, "Always Together" (or in Dutch, "Voor altijd samen") has a tear-jerking Christmas present-giving among the orphaned family of the story, and "The Jinx From St Jonah's" has a slapstick chase to get back some presents that are destined for charity.

The only catch? Due to 'production troubles' this issue was dated 18 January! It was originally due to be dated 28 December.

Thanks Jenni. Interesting to hear that once again production troubles (presumably a strike?) caused delays with comics. I remember the winter of 1970 when several IPC comics were suspended for about 8 weeks or so. Also, when looking for the 1978 Christmas issue of 2000AD I noticed there wasn't one! Another gap of a few weeks. I'd forgotten about that.

Just to say that I have now posted about the Jinty issue in question.

Thanks for the heads up, Jenni.

Check out Jenni's blog, folks. I don't know much about Jinty comic but Jenni knows her stuff. It's all part of the rich history of UK comics.