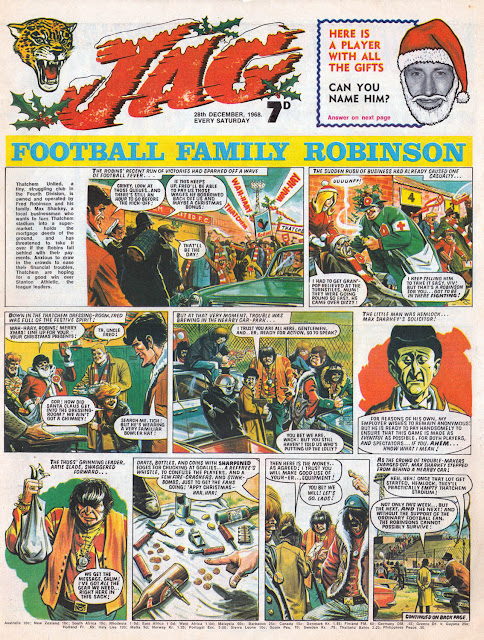 Jag was Fleetway's attempt to mimic Odhams' Eagle with a big 12 inch x 15 inch format and a mixture of strips and features. The cover strip, Football Family Robinson, shown here was illustrated by the great Joe Colquhoun (eleven years before he'd embark on drawing Charley's War for Battle). The surprising thing about this episode is how they got away with showing the weapons of football hooligans on the front cover.

The strip continued onto the back page, which it shared with the team of the week photo... 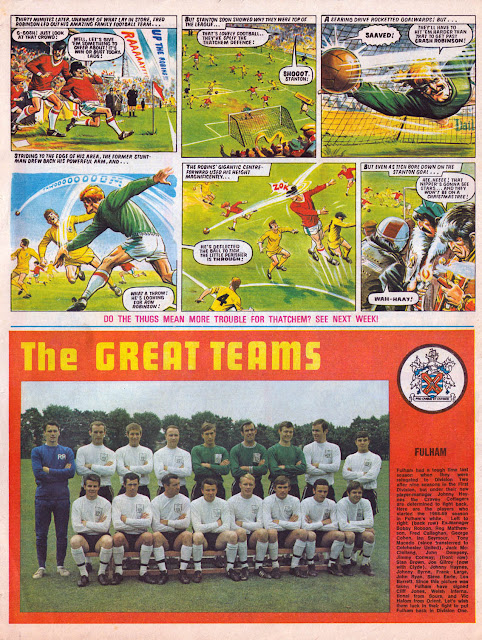 Inside, the editor's Christmas message is full of optimism for the future of the comic. Quite sad really, as with IPC taking over the company shortly after, Jag was to swiftly merge into Tiger at the end of March the following year.

Jag only featured one humour strip page; Ghouldilocks, drawn by Stan McMurtry. Unfortunately Stan, better known as Mac, is known more for his controversial cartoons for the Daily Mail these days. (See here.) 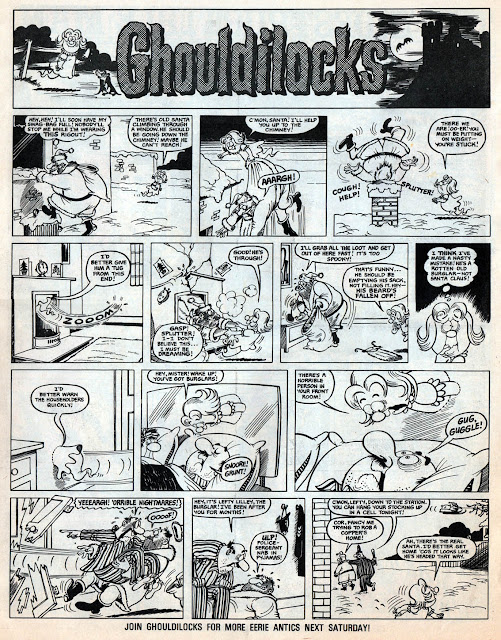 Apart from the cover strip, the adventure serials in this Christmas issue of Jag didn't reference the festivities but it's worth showing a few pages anyway as they're so good. First up, The Indestructible Man, drawn (and signed) by Jesus Blasco, who was also the artist on The Steel Claw in Valiant of course... 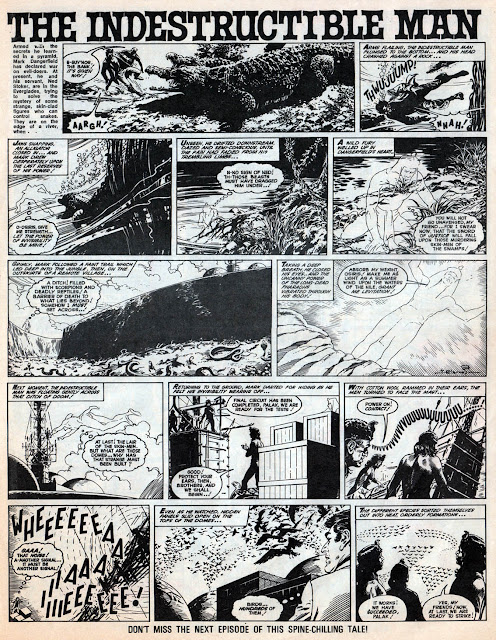 The centre pages had full colour, and the high quality web offset printing allowed Geoff Campion to do some nice colour work on Custer... 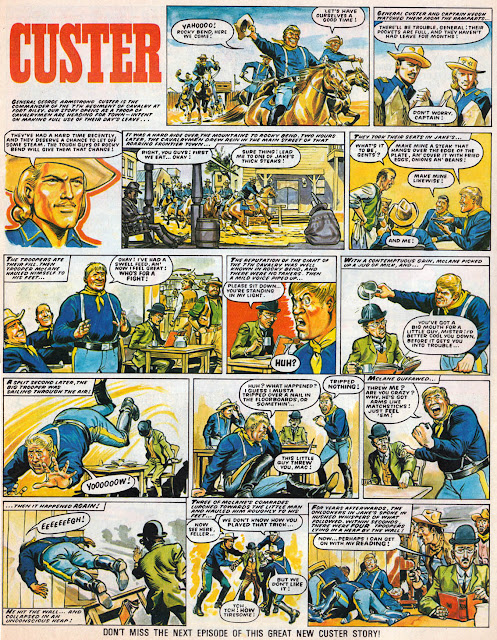 On the inside back page of this 16 page comic was Boy Bandit, superbly illustrated by Tom Kerr... 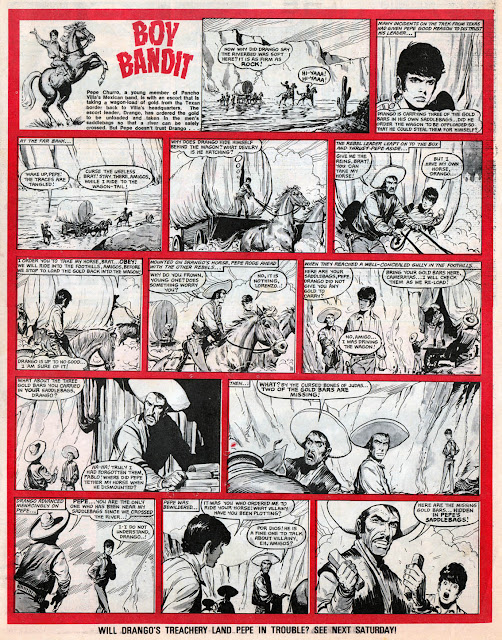 Sadly this was the only Christmas issue of Jag. Despite having some of the best artists in the industry working on the comic it only lasted for 48 weekly issues. Personally I thought it was one of the best comics Fleetway ever did, and copies are worth tracking down, although they can be expensive. You can find out more about the comic in this old post of mine from eight years ago here:
http://lewstringer.blogspot.co.uk/2007/09/remembering-jag.html

What year will this blog visit next for Christmas? Find out soon!
Posted by Lew Stringer at 18:08

You tease.. you did it again.. Post a page with a question and don't post the answer..

I take it that it's some Footballer but I don't think it's Nobby Stiles, so I think my knowledge of them is passed...

Answers on a postcard please.

I didn't think anyone would be interested in the quiz. The answer is Bobby Charlton.

On first glance (and before I saw the question) I thought it was Spike Milligan with a Santa hat on !

^_^ Questions without answers are always of interest

I wasn't a regular reader of Jag when I was a kid so its nice to see these strips here - I had forgotten that Ghouldilocks" was produced for Jag my memory of this strip wasfrom "Whizzer and Chips" or Monster Fun" (or a similar title) Really lovely art by Jesus Blasco here and by Tom Kerr one of my all time favourite UK artists - great stuff again Lew and nice to see these strips after so many years - I also thought the pic Was of Spike Milligan on first view.

I'm pretty sure Ghouldilocks was reprinted in an IPC comic later, Paul, so that'd be why you remember it from elsewhere.

I was keen to see more Boy Bandit after your 'Remembering Jag' post, Lew, and now ... a mere eight years later ... I've finally seen my second strip! Still feel this could be one of Tom Kerr's career highlights.

Jag seems a really classic, impressive comic. Good to see it being remembered and celebrated.

Yes, Ghouldilocks was in Shiver and Shake from late August, 1973. Only a few were reprints, though.

PS: Sorry if you get this twice - my computer froze when I first tried sending it.

No worries. It only arrived once.

Thing is, Jags are so expensive (I wonder why), a Blimey! Boy Bandit feature one day might be the best hope of seeing a few! I think it's just text stories for him in the annuals, isn't it...?

Pity there's so much good stuff from the past that seems to stand no chance of ever getting a reprint. And it becomes more obscure by the year ...

I may be mistaken as I don't study eBay too closely but I think most of the shorter run titles such as Jag, Thunder, Jet, tend to be priced higher. Perhaps it's because it's easier to complete a short run so they're more in demand? I think in Jag's case, quality also comes into it. The strips are good, and the better paper means the comics haven't deteriorated as much as newsprint.