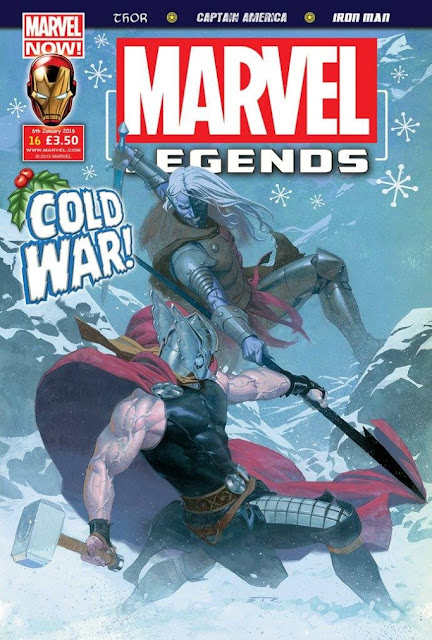 Most British editions of American comics don't usually have Christmas issues but I have noticed that Panini editor Brady Webb often adds a festive touch to the titles he edits. Case in point, the latest issue of Marvel Legends. The stories may not have a Christmas theme but fortuitously this month's cover has a snowy landscape for the Thor story within. Add a sprig of holly and some snowflakes and job done, - there's your Christmas edition!

Here's some more info about the issue:

Marvel Legends Vol.2 #16. On sale 10th December 2015. 76 Action-Packed Pages in the Mighty Marvel Manner! £3.50!
Captain America and Falcon battle Dr Mindbubble, the Iron Nail – and SHIELD?!
Also, time is running out for Iron Man to stop the Godkiller from wiping him out of existence!
Plus, Malekith is winning the war as the League of Realms turn on each other!
By Rick Remender, Nic Klien, Kieron Gillen, Carlo Pagulayan, Jason Aaron, Ron Garney and Emanuela Lupacchino!
Includes material reprinted from Captain America Vol.7 #18-19, Iron Man Vol.6 #16 and Thor: God of Thunder #16!

Cover image and information taken from the Marvel Collector's Editions Facebook page, which you can visit here:
https://www.facebook.com/MarvelCollectorsEditions

If you like Marvel comics and you've never read Marvel Legends, give it a go. Apart from being great value (basically three comics in one) and featuring good contemporary Marvel stories, it's the closest thing in content to the long-gone Fantastic comic that many of us enjoyed back in the sixties. Both comics feature Iron Man and Thor (and the occasional superhero pin-up) but where Fantastic had 40 pages and black and white interiors, Marvel Legends has 76 pages and is all in full colour.

Marvel Legends No.16, out tomorrow from WH Smith and selected newsagents.
Posted by Lew Stringer at 20:45

I read that Thor story as part of a downloaded graphic novel about 18 months ago. Marvel UK comics in the '70s didn't have special Christmas issues but they always had a festive-looking back cover with various Marvel characters in Santa hats building a snowman or suchlike. I especially remember the one from Christmas 1976 which had Captain Britain surrounded by other Marvel characters. Of course that was when the CB weekly was still new but by the following Christmas Captain Britain had come and gone.

Yes, the first Mighty World of Marvel in 1972 had a Christmas issue too, but they often didn't bother.